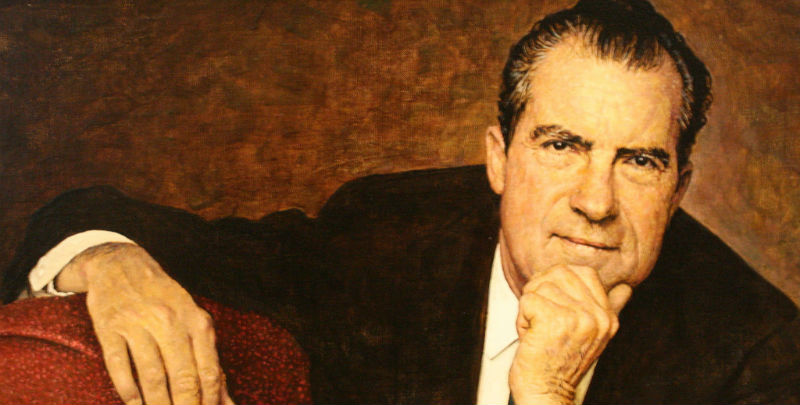 And What We Should Expect for Our Current President

In terms of where politics and culture meet, there isn’t that much to get excited about these days. But something that might well deliver the goods a bit further down the road is how the current U.S. president will be portrayed in fictional form. There are already shelf-loads of memoirs and insider accounts of the administration, but the slow-percolating fictionalized renditions can often be more telling and instructive, not to mention longer-lasting. Trump has provided copious amounts of material for late-night comics—history’s alternative first draft, if you will—so it seems like a safe bet that over the coming years different versions of him will appear in novels, movies and TV series. Not all presidents get this treatment, however, and we’d probably have to go back nearly fifty years to find a match for Trump’s weird “appeal” in this regard.

Why there should be more fictionalized versions of Richard Milhous Nixon than of any other president in history is not hard to fathom. Nixon said he wasn’t a crook, but of course he was. Trump says he isn’t one either, and that remains to be seen (unless, that is, you’ve read Wayne Barrett, David Cay Johnson, Tim O’Brien, Julia Ioffe, Seth Hettena, Carole Cadwalladr, Luke Harding et al, and already believe he is one). So is it the villain thing—the larger-than-life, comic-book, bad-guy thing? Probably. That and getting to watch an outsized, extremely flawed personality act out his resentments and insecurities on a stage the size of the entire world.

Like Trump, Nixon made a habit of keeping his weaknesses and psychological wounds on open display, and did so long before he reached the Oval Office. Unlike Trump, however, Nixon was reflective, articulate, and actually a pretty good writer (pace Tony Schwartz)—so we have, in the first of the many books he wrote, his memoir Six Crises (1962), a prototype for the Nixonian iterations to come, most of which riffed freely off the frankly very compelling voice we hear in that book.

One more point to bear in mind before we dive in. The first three entries in this list are works by 20th century American literary heavyweights, and while their compulsion to write about Nixon is understandable, what’s most remarkable here is that each of their Nixons—extravagant, fully-formed, and appropriately insane—is pre-Watergate. 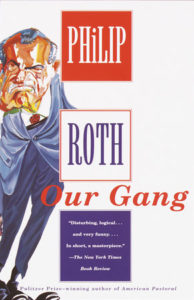 Our Gang, by Philip Roth

One day in 1971 Philip Roth saw side-by-side stories on the front page of his morning newspaper: one, Nixon declaring his belief in the sanctity of human life where abortion is concerned, and two, Nixon ordering the release of a man recently convicted for his participation in the My Lai massacre. Roth figured there was no small irony in this juxtaposition and he went to town on it. The resulting satire is savage and Swiftian, if a little unrelenting. Reading it today, the funniest and most resonant joke is the notion of President Trick E. Dixon picking on a country like Denmark to declare war on and invade. 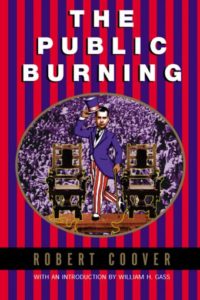 The Public Burning, by Robert Coover

Coover’s novel was published in 1977, but it is an account of the events leading up to the executions of Julius and Ethel Rosenberg in 1953, when Nixon was Eisenhower’s VP. The book is a carnivalesque phantasmagoria with a cast of thousands that is intercut with chapters that make up a sort of unfiltered prequel to Six Crises. Again, the madcap stuff tends to be unrelenting and can be tiresome, but it is the intriguing, hilarious, and, yes, moving chapters narrated by Nixon that make this novel worth seeking out. And that is what you’ll have to do, because The Public Burning, always described as “controversial,” has had a chequered history in terms of its availability. 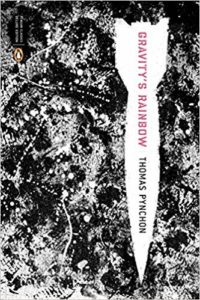 This one is brief, an oblique cameo that appears in the closing pages of Pynchon’s masterpiece. The screaming that comes across the sky at the novel’s opening hovers darkly over its ending as Richard M Zhlubb, night manager of the Orpheus Theater in Los Angeles—“jowled, with a permanent five-o’clock shadow (the worst by far of all the Hourly Shadows)”—rails against what he calls “irresponsible use of the harmonica” by a troublemaker in “an unauthorized state of mind.” This flashforward to the early 1970s from the novel’s main setting at the end of rocket-happy World War 2 takes us deep into the Cold War, where a paranoid, persecuted Nixon is now the overseer of a vastly expanded technocratic order of nuclear weaponry and impending apocalypse. 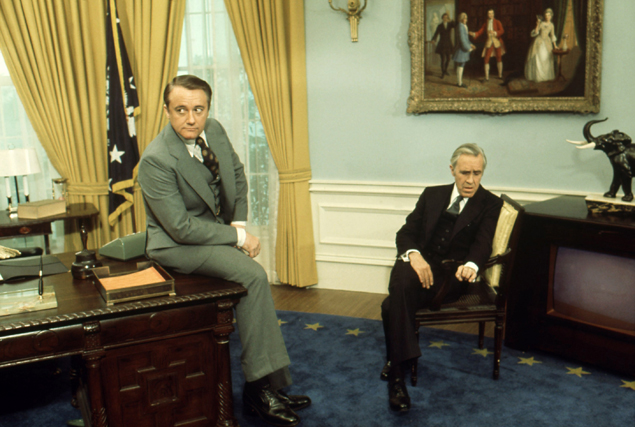 Two years after Nixon resigned over Watergate, All the President’s Men (directed by Alan J, Pakula and written by the late, great William Goldman) was released and hit a high water mark for 1970s dread-laden celluloid paranoia. But Nixon only appeared in it at the very end, on a TV screen, and that was the real Nixon. We had to wait until the following year for a fictional take. This was a six-part TV mini-series based on John Ehrlichman’s novel, The Company, and featured one President Richard Monckton, played by the inimitable Jason Robards (who had immortalized Ben Bradlee the previous year in ATPM). I haven’t been able to locate a copy of Washington Behind Closed Doors, so I haven’t seen it since its first run, and therefore can’t vouch for its quality, but I do remember being riveted by it at the time—and I suspect that meant being riveted by the portrayal of its “salty” and “vindictive” POTUS. 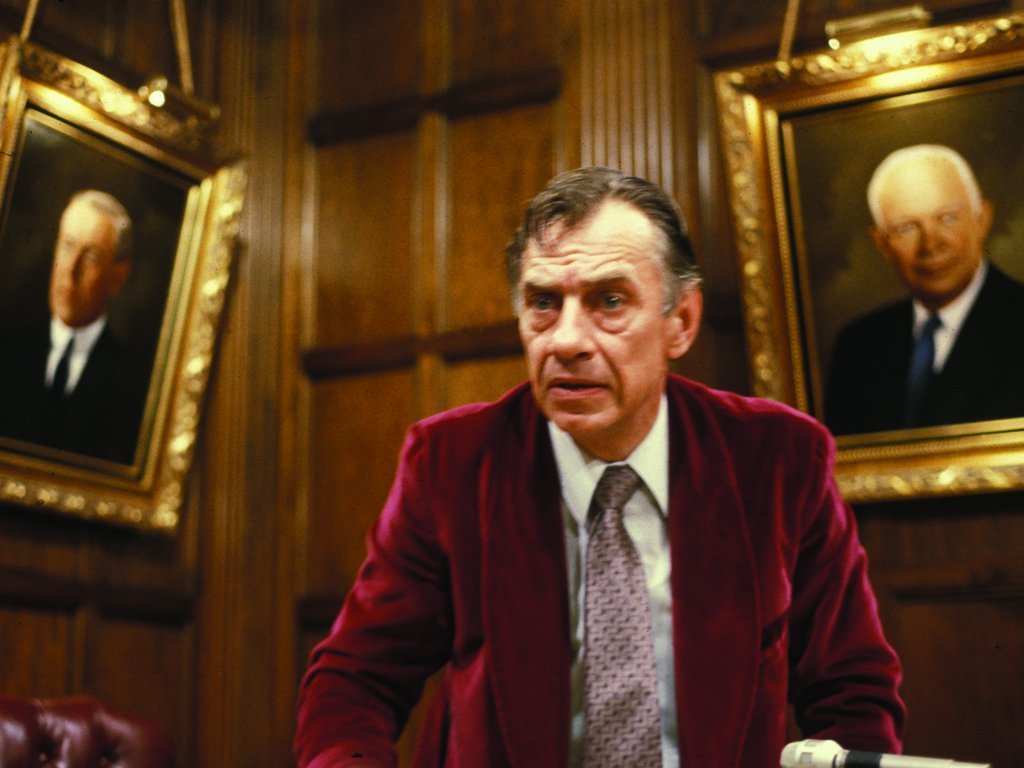 Late at night in his office, with a glass of Scotch in one hand and a gun in the other, this version of Nixon unloads a rage-filled ninety-minute monologue into a tape recorder on his desk. It’s Six Crises after the fall. Under Robert Altman’s direction, Philip Baker Hall delivered an astonishingly raw performance, but the anger here wasn’t all Nixon’s. In 1984 there was still a lingering hangover from the effects of the psychological dysfunction Nixon had unleashed on the country and this is reflected in the movie’s dark, blistering tone. 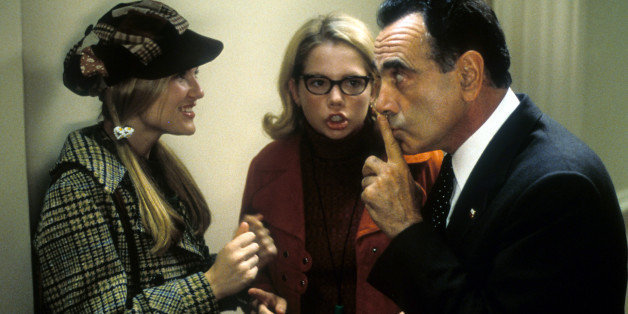 There have been other notable screen Nixons (Anthony Hopkins in Nixon, Frank Langella in Frost/Nixon, Kevin Spacey in Elvis & Nixon), but to provide a little contrast to Philip Baker Hall’s tortured and volcanic RN I’m going to single out Dan Hedaya’s broader, more cartoonish take in the 1999 comedy, Dick. With cameos by Will Ferrell as Bob Woodward and Saul Rubinek as Henry Kissinger, Dick is a lark from start to finish, but Hedaya still manages to imbue his jowly Nixon with a suitably uncomfortable mean streak. 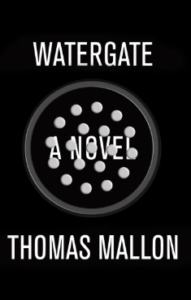 It’s sort of understandable, but most fictional Nixons tend to get quickly dialed up to eleven. The one in this 2012 novel by Thomas Mallon is an honorable exception. Measured and subtle, Watergate is like Watergate as told by Anthony Trollope. And even though it is essentially comic in tone, the novel’s deep interest in character precludes it from the gross exaggeration of caricature. Nixon here has all the usual flaws and insecurities, but he is achingly human. A Thanksgiving Day phonecall to Mrs Onassis (November 22, 1973, yikes), and a subsequent conversation with Mrs Nixon, are—I don’t know how Mallon does it—absolutely heart-wrenching. 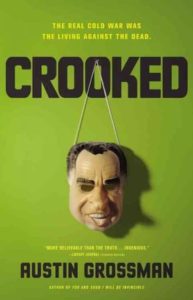 Finally, a version of Six Crises that is not just unfiltered, but on acid. Narrated in the first person, the voice pitch perfect, Crooked is an alternative and occult history of that titanic struggle between the forces of good and evil, the Cold War. Interestingly, this novel came out in 2015, and its protagonist, who will eventually become the 37th president of the United States, is revealed early on—just sayin’—to be a highly compromised asset of the Russian intelligence services.

The Most Anticipated Crime Books of 2019: Part 1 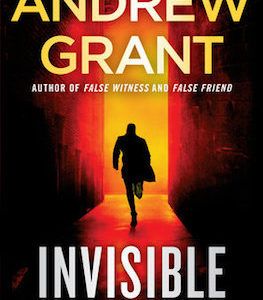 One day, a week or so after I turned eighteen, I sneaked into Manhattan with a couple of buddies from high school. We didn’t...
© LitHub
Back to top