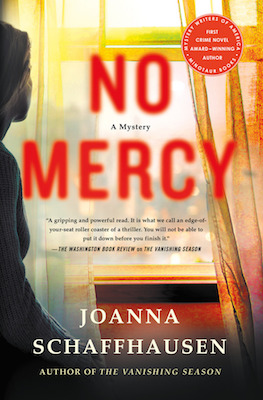 The following is an exclusive excerpt from No Mercy, by Joanna Shaffhausen, a neuroscientist, psychologist and thriller writer who brings her razor-sharp scalpel to the art of plotting, and her knowledge of psychology to her creation of twisted minds. In the following passage, Shaffenhausen’s series characters, police officer Ellery Hathaway and FBI profiler Reed Markham, take on a complex new case in this second in the series.

At his desk, Reed focused on the background workup on a suspect in a car bombing case in Birmingham, Alabama, that one of his colleagues had finished that morning. Reed had mastered the ability to tune out the world around him, disappearing the other agents and their tap-tapping on keyboards or ringing phones, so it took him a minute to realize his pants were buzzing. He fished out his phone, and a little jolt went through him at the sight of Ellery Hathaway’s name on his caller ID. He had not spoken to her since the summer and all that ugliness up in Woodbury.

Gingerly, he pressed the button to accept the call. “Reed Markham,” he said, and then looked around to see if anyone was watching him. For some reason, Ellery still felt like his secret, even though the rest of the world knew who she was now.

“No, no, not at all. It’s fine. I’m glad to hear from you. I’ve been meaning to give you a call, but . . .” He trailed off because he didn’t really have a good excuse. Mostly, after the Coben story blew up again in the wake of the new murders, this time with Ellery’s identity revealed, Reed felt like the best thing he could do for her was to get the hell out of there. Hanging around in her orbit would have only helped keep the story alive. He groped around in his head for some amount of truth, something real that wouldn’t scare her off entirely. “I’ve wondered,” he said at last. “How you were doing.”

“Oh.” She gave a short, dark laugh. “Well, I haven’t shot anyone since you left. So there’s that.”

“I read that you were suspended,” he replied.

“Yeah, they have me shrinked up at the moment. First, they tried offering me an early retirement—no pension or anything, just a couple of years’ pay to hush up and go away, and I think they were praying I’d take it. They don’t want me back but they don’t want to fire me, either. I mean, how would that look on the news, right?”

“Not pretty.” If it hadn’t been for Ellery, the town of Woodbury might have lost a good many more citizens.

“Exactly. So I’m in limbo at the moment.” She paused. “That’s kind of why I’m calling.”

“Oh?” The last time she’d phoned, Reed had ended up face-to-face with a serial murderer. “No one is mailing you menacing Christmas cards, I hope.”

“No, it’s nothing like that,” she assured him quickly. “But I could use your advice. Your professional advice. Well, not me, a friend. No wait. She’s not really a friend, but I think if you heard her story, you’d want to help, too.”

Reed closed his eyes and leaned back in his seat. Of course he always wanted to help. This was his problem, at least as Sarit had framed it to him. “What is it?” he asked with his eyes still shut.

“Her name is Wendy Mendoza,” Ellery told him, and then she sketched out the basics of a case that was both horrible and entirely hopeless: there were no witnesses, fibers, DNA, or fingerprints. Just a victim whose life had been destroyed. Of course her story seemed powerful. It was literally all that was left. “She can’t eat or sleep,” Ellery was saying. “She lost her job and she’s afraid to leave the house because he’s still out there. The detective on the case says there’s nothing more they can do right now, but he would love to have you take a look at the file and offer your opinion.”

Reed’s opinion was that Somerville had an anger-type rapist on the loose, that the man had assaulted women before and likely would do so again before he was caught. He felt confident that the detective on the case already knew all of this, however. “You talked to the detective? About me?”

“Your name came up. Listen, I know it’s a lot to ask, and you don’t owe me anything—”

“How do you know her?” Reed cut her off. “The victim—the one who is not your friend.”

Ellery was quiet on the other end of the line for a long moment. “We’re in group therapy together,” she muttered eventually. “A group for people who experienced violent crime.”

Something in her words made his throat seize up. He had a flash of his own hands shaking as they’d pried open Coben’s closet. He saw Ellery lying half-dead on the floor. He’d been sure he was too late, that she would not be saved. “I can be there tomorrow evening,” he announced with sudden decisiveness, already calling up the flight schedules. “But just don’t expect any miracles.”

When he hung up with Ellery, Reed booked a flight to Boston, found a hotel, and only then went to ask permission for the side trip he’d already arranged. Russ McGreevy, colloquially known as “Puss” since he’d come out of an armed standoff with the victim’s pet cat under his arm, barely looked up when Reed knocked on the door and stuck his head in the room. Maybe he would be too distracted to parse the details. “Hey, boss? I just wanted to let you know I’m going up to Massachusetts tomorrow for a quick consultation on a serial rape case.” Ellery had mentioned just the one known victim, but Reed knew there had to be others.

McGreevy looked up from the paperwork he was reading and took off his glasses so he could regard Reed fully. “I don’t recall seeing anything on the docket about a rapist in Massachusetts.” McGreevy might have been retiring later in the year, but he was only in his mid-sixties and was exiting at the top of his game. The man missed nothing. “You’re working the bombing in Birmingham with Alan Turk.”

“We have that report ready to go,” Reed said as he eased into the room. “Alan can handle any follow-up.”

McGreevy scratched the back of his head and squinted at the ceiling. Reed had seen the routine enough times over the years to recognize that McGreevy’s next question would be rhetorical. “Did I assign you a case about a rapist in Massachusetts? No,” he said, indeed answering his own question. “No, I am sure I would remember if I had done so. We don’t have any active investigations at all up there at the moment, so what is this about?”

Reed took a seat and gave Puss the basics of the rape investigation. McGreevy waved an impatient hand at him, cutting it short. “Terrible story, yes. But if the local PD needs assistance, they can requisition help through the usual channels. This is a matter for the state bureau, Reed. You know that.”

McGreevy frowned, deepening the lines at the corners of his mouth, and the scowl made him look his age. “No, I very much don’t want you investigating official cases in your free time,” he said. “Let’s take a moment and remember how that worked out last summer.”

Article continues after advertisement
“Don’t get cute with me, Markham. There’s brave and then there’s stupid, and we both know your stunt last summer was an equal mix of both.”

Reed heard the shot ring out in his memory, saw the body at his feet. He shifted uncomfortably in his chair. “We stopped a murderer. Last time I checked, that was part of the job description around here.”

“Don’t get cute with me, Markham. There’s brave and then there’s stupid, and we both know your stunt last summer was an equal mix of both. I’m surprised you’re in such a hurry to get back up there.” As he said the words, a realization dawned over his face. “This is about that girl, isn’t it? Abigail.”

“She’s on paid leave, and it’s just temporary.” Reed sat up straighter, happy to defend her since he’d been suspended so recently himself. “And anyway, this isn’t her case. The investigation is being run by a Detective Manganelli from the Somerville PD.”

McGreevy raised his bushy eyebrows. “Yeah? Is he the one who called you?”

“In a manner of speaking.” Ellery had said it was Manganelli who wanted him to look into the case; she had just been the one to make the call.

“Hmm,” said McGreevy, clearly not buying it. He tapped his fingers on the desk a moment and then sat forward with a sigh. “Two days,” he told Reed. “That’s all you get.”

Reed grinned and leaped to his feet. “Thanks, Puss.”

“Don’t thank me. Just go do your job and get back here with your nose still clean. And Reed . . .” He waited until Reed turned around again. “Whatever itch you have for that Hathaway girl, make sure you scratch it this time, okay? She’s not someone you want to be mixed up with on a continuing basis.”

“We both know that bullshit story the two of you cooked up this summer is exactly that—bullshit. I don’t give a damn what the record says because I’ve seen the evidence firsthand. She shot an unarmed man. She put a bullet through his head while he was in physical custody.”

“For which we are all sincerely grateful.” McGreevy put his glasses back on and returned his eyes to his work. “You go on up there to Massachusetts and thank her for us any way you see fit.

But then you get your ass back down here for good.”

From NO MERCY, by Joanna Schaffhausen. Used with the permission of the publisher, Minotaur Books. Copyright © 2018 by Joanna Shaffhausen.

10 Crime Books You Should Read in January 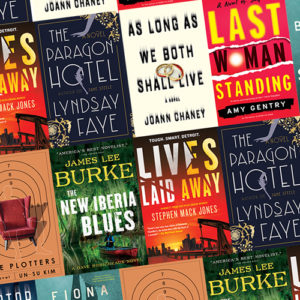 10 Crime Books You Should Read in January At the start of every month, CrimeReads staff members look over all the great crime novels and mysteries coming out in the weeks...
© LitHub
Back to top