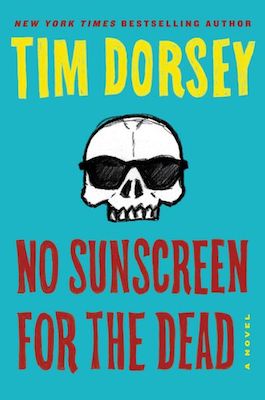 The following is an exclusive excerpt from No Sunscreen for the Dead, by Tim Dorsey, the latest to feature everyone’s favorite zany Floridean sleuth, Serge Storms, as he and his partner-in-crime, Coleman, attempt to join a retirement community but soon find themselves embroiled in unveiling a complex scheme to steal from the residents in a tale that harkens back to the great age of Florida land deals gone awry.

Late one night in the state’s largest retirement community, a sixty-eight-year-old woman and her younger boyfriend were arrested for having public sex in the town square. The police officer found them at ten thirty with underwear down, still going at it against the side of something called the Bait Shack.

Media around the country eagerly picked up the story, and the Daily Mail from London actually flew an undercover reporter across the ocean, who came back with sordid tales of a thriving swingers’ scene, a black market in Viagra, and drunk driving in golf carts.

The community quickly swung into action. A local bar introduced a new rum drink called “Sex on the Square” for $3.75 that sold briskly during the early-bird hour. The morning paper published the recipe.

An hour northeast of Disney World, a banana-yellow 1970 Ford Falcon took the Wildwood exit off Interstate 75.

The muscle car zigzagged its way across Sumter County until it parked at a curb outside the manicured entrance of a gated community with large cursive letters on a decorative sign:

Serge raised heavy binoculars. “There it is. Biggest retirement biozone in the known universe, the size of Manhattan, a hundred and twenty thousand strong.”

Coleman fired up a doobie with one hand and drained a Schlitz with the other. “You mean the place with the sex scandal you’ve been talking about?”

“It’s age discrimination, I tell you!”

Coleman fit the end of the joint into a citrus marmalade jar. “Explain.”

“Where do I even begin?” Serge threw his arms up. “Total prejudice against seniors, not to mention gender bias. Nearly every headline was like, ‘Grandma Arrested for Public Sex.’ Grandma! You never see a headline ‘Grandpa Elected President.’”

“But then there’s the upside,” said Serge. “The nation has all these viciously unfair stereotypes about Florida’s beloved retirees down here in ‘God’s waiting room.’ Bluehair, cotton-top, geezer, old biddy, old bag, old coot, old codger, old fart, over the hill, worm food, corpse-lite, junior varsity cadaver. What better way to combat the false images than outdoor fucking? Admittedly it might be a bit of an overcorrection, but you can only push people so far.”

“She did what she had to,” said Coleman.

“But here’s the worst part,” said Serge. “She got sentenced to six months! When I first heard that, I’m thinking suspended sentence, probation, community service. But no, a half year in a real jail. Even with time off for good behavior, she still ended up serving a full four and a half months. And to protect us from what? Has the whole world gone crazy?”

“What about all those highway signs around here announcing Silver Alerts when some confused old dude gets ahold of the car keys?” asked Coleman.

Late one night in the state’s largest retirement community, a sixty-eight-year-old woman and her younger boyfriend were arrested for having public sex in the town square.

“Down here they find an average of one guy a day driving the wrong way on the interstate,” said Serge. “Just validates my point even more. See, these people are crazy like foxes. They’ve figured out that advanced age is a VIP pass to aberrant behavior. Because of the rampant prejudice against seniors, almost any stunt they pull is dismissed as befuddlement. So whenever they feel like it, they just take off on an adventure until the police gently step in. ‘Sir, hand me the car keys and we’ll get you back to the home and everything will be okay.’ Meanwhile, he’s giggling his ass off again with that strip-club smell.”

“Never thought of it that way.” Coleman looked down at himself. “Serge, why are we dressed like this?”

“But I thought you meant like in those movies when a legendary safecracker says he’s retired, and it means he’s decided to give up the life and go straight.”

“No, I meant literally retired.” Serge picked up a camera with a giant zoom lens and aimed it out the window. “The country has changed drastically in the past few years, and not for the better. I’m tired of the growing sector of young people in this country who have so much, yet bicker relentlessly. They blame anyone who looks, talks or smells different. They blame anyone who has more money than they do. They blame anyone who has less money. And if someone has the exact same amount of money, they must have cheated, so fuck them, too. Their middle fingers are permanently extended while driving . . .”

A horn blared as a Chevy went by. “There’s one right now,” said Coleman. “I think you’re blocking a lane.”

“. . . Retirees, on the other hand, have the gift of wisdom in spades. No time for pointlessness. They spend each precious day on this little rock of a planet just being happy because it’s the only agenda that makes sense. True, they talk a little too long with the grocery cashier about their spastic colon, but among their people that’s like a peace pipe.”

“What about the so-called Condo Commandos?”

“A Samsonite chair is occasionally flung at the monthly meetings, but that’s the exception that proves the rule. I’m looking forward to the aqua-aerobics classes.”

Coleman looked down again. “I don’t know about these clothes.”

“I do,” said Serge. “That’s another gem of their life philosophy that should be a song: ‘Dress Like You Just Don’t Care.’ . . . See? I’ve got my orange shorts, my calf-high black socks and, most important of all, my white belt. White belts are key.”

Coleman scratched his head. “You’re taking photos of that old woman on a motorized scooter?”

“To accompany my oral-record project.” Click, click, click. “These people have so much knowledge to share that could soon be lost forever. I missed out on the Greatest Generation, and I’m not about to repeat that mistake.”

“Observe,” said Serge, crossing over to the wrong side of the street and pulling alongside the scooter. He stuck a microphone out the window. “Hey, Grandma! . . . Oops, sorry, I screwed that up. I meant sage, oracle, guru . . . Just a few questions for the permanent record. The sex scandal in your town square: Bum Rap or Badge of Pride. Your thoughts?”

“Get lost, pervert.” The scooter inched away.

This time an old man in a porkpie hat. The microphone went back out the window. “Hey, Gramps! . . . Damn! Did it again. I meant mahatma . . . How does it feel to be part of the Second-Greatest Generation?”

“What? No! You misunderstood!” Serge stopped at the curb and let the scooter drive away. “Good luck with the colon!”

Serge turned around. “No, just a security guard. They think they’re the police, which is scarier, and it’s safest for all to play along with the delusion. Hide the dope.”

A golf cart stopped next to the muscle car, and the guard approached the driver’s window. “Excuse me, but what’s with that camera and microphone?”

“And on the wrong side of the road,” said Serge. “I’m confused.”

“I’m retired. You have to let me get away with anything.”

The guard stood upright and squinted. “Retired? But you’re not old.”

The guard paused. “What exactly are you doing here?”

“Looking for a place to live in the Villages.”

“But it’s age-restricted,” said the guard.

“What if I promise to put the camera and microphone away?” said Serge. “Then can we go in the Villages and look for a place to buy? For when we’re old enough? What do you say, Officer?”

The guard thinking: He called me Officer. For some reason, I kind of like this guy. “Well, okay, but don’t bother anybody.”

“Thank you, Sergeant.” They drove away from the curb and pulled through the entrance.

“It’s the Villages,” said Serge. “I even know a few people who live here. Couldn’t be nicer folks. That’s why it hacks me off when people snicker about this place . . . Really? Some woman copulating al fresco is this community’s idea of a crime wave? What’s your neighborhood like? . . . But they still talk.”

“Because of the scandal?”

“Actually started a couple years before that when it was reported that this place had the highest STD rate in all of Florida.”

“Wow.” Coleman looked out the window at residents pruning yards. “These people are cool!”

“I know,” said Serge. “Except the press reported it like it was a bad thing. But the way I see it, if you can put Joe DiMaggio–like STD stats up on the scoreboard, it means you’re too busy with the important stuff to waste time bad-mouthing restroom policies and Mexicans.”

“Except for seafood and toilet paper, new is terrible. New is a crisis.”

“And I’ve seen enough here,” said Serge, turning the car around in the town square. “I can’t hang with the construction methods. As nice as these people are, everything’s so new.”

“Except for seafood and toilet paper, new is terrible. New is a crisis,” said Serge. “Give me a retirement home with jalousie windows and terrazzo floors and I’ll die a happy man. Oh, and those old racks of folding trays every home used to have. You’d open one of the trays in front of a chair in the living room to eat a TV dinner. And not today’s fraudulent microwave stuff that isn’t even called a TV dinner, but the original ones that spelled quality with real aluminum foil and niblets.”

“What about lawn jockeys?”

“Coleman, can we please have a serious discussion?”

“Sorry.” Coleman furtively re-lit the joint between his knees.

“So what happens now?”

“We need to find a vintage retirement home, and I know just where to look,” said Serge. “Florida already has the Gold Coast, the Treasure Coast, the Space Coast, the Nature Coast. But over here, from Sarasota to Venice to Naples and all the way to Marco Island, southwest Florida is the Retirement Coast. I just coined that.”

“So what do I have to do to be retired?”

“Don’t work and do whatever you feel like all day.”

A large, austere concrete building stood at 935 Pennsylvania Avenue, just down the street from the White House. Architecturally anemic. If the windows were narrower, you’d think it was a federal prison. Inside, some of the nation’s most important and sensitive business.

Men in black ties sat around a conference table in one of those fortified rooms that couldn’t be penetrated by microwaves. A map of Florida hung on the wall with colored pushpins scattered from Orlando to the Everglades. The national headquarters of the FBI.

A man named McCreedy entered the room, and everyone stood.

“Sit, sit.” He opened a file code-named Wildfire. “Any updates?”

“That would fit the timeline.” McCreedy closed his file. “Now, does anyone have any idea how in the hell this could ever have happened? I was told we had safeguards.”

“We do,” said the agent. “But there was a data breach. Stolen, leaked, hacked—it’s anyone’s guess.”

“Take Johnson and Barber and use my jet. Coordinate with the local office.” He stood, and everyone got in motion.

From NO SUNSCREEN FOR THE DEAD. Used with the permission of the publisher, William Morrow. Copyright © 2019 by Tim Dorsey.

When Dell Flipped on Mystery Readers 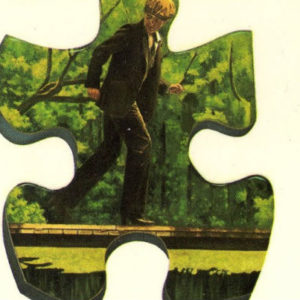 When Dell Flipped on Mystery Readers Considering how many mystery novels—old as well as new—have made knotty intellectual puzzles central to their plot development,...
© LitHub
Back to top