"In writing as in life, we stumble on, piecing together whatever clues we manage to uncover."

I thought I’d come to the wrong office: The entrance foyer to the publishing company was the color of a hospital waiting room in a second-tier city. As I slid my resume under the pane of glass at the front desk—like the ones ubiquitous then in Chinese restaurants, when crime in New York City was off the charts—I felt more like a heroine in a noir novel than an aspiring member of the literati.

I chose to overlook the fact that my way to the publishing office, I passed a corpse, a drunk sprawled out on a park bench, stiff with the winter cold.

I didn’t know the job of book editor existed until I moved to New York with my then-husband. All I knew was that no one in my preferred fields of newspapers or magazines had responded to my inquiries.

I looked resolutely forward in my job search not because I was fearless, but because I felt I had no other choices. Work in “creative” fields was hard to come by, and my husband was a graduate student. We shared a railroad flat with the bathtub in the kitchen.

Not long after I left my resume, the Chairman of the Board called me in for an interview. I could barely type, a fact I tried desperately to hide. I was thrilled to be offered a temporary position, filling in for the Chairman’s regular assistant, then on leave.

Now I had at least a modest toehold in the company that published more Nobel winners than any other in America: But was this really the home of so much fine writing? I couldn’t reconcile that the owner of the company, heir to a major fortune, asked his workers to toil away in what I would have to call a dump, with its dim lighting and faded walls badly in need of a good paint job.

Since the Chairman was semi-retired and only came in a few days a week, I was often left on my own not only to catch up on filing and copying, but also to read manuscripts. I was surprised and heartened that he asked me to review submissions from respected and well-established agents.

At the end of my six-month apprenticeship, armed with his recommendation, I secured an entry-level job at a major paperback publisher, where I learned all I would ever need to know about the book trade over nearly a decade. Over the years, I changed jobs several more times, moving up the literary ladder with each one, a success propelled, as it turned out, by detective stories and police procedurals.

The young woman walking by a corpse on her way to work had come full circle on the page.

Fast forward many years: I’ve moved to a “transitional” neighborhood in pre-gentrified Brooklyn, where you can still get a deal. I feel instantly at home amid nineteen century mansions now on the near side of seedy; it’s a place that seems unfinished, a mere shadow of its previous grandeur—still in process, like the books I work on.

Every morning on my way to the subway, I walk past a dilapidated but charming three-story building where the ground level sits empty. Vladimir, AKA Bobby the Russian, a local lothario who owned an antiques business, had been shot in the doorway there by his former brother-in-law and business partner – so it is said. Or was the killer the husband of one of Bobby’s many paramours?

The drums are talking. At the corner bodega, the Latino clerk whispers: “It was someone from the Russian mob in Brighton Beach.”

Sometimes I find local life more compelling than the manuscripts I bring home each night to read.

Though I prefer my crime scenes on the page, I see an opportunity on this Brooklyn corner. I meet the landlady as she sells off the contents of the dusty space crammed with old chests of drawers, Tiffany-style lamps, and antique dining tables. That day, we say little about the murder; instead, we gossip about the Russian’s prowess with the ladies. This is typical of the neighborhood then — once a crime is broadcast on the local grapevine, it is rarely discussed further. I buy two chairs for $15.

A few weeks later, I find myself signing a lease for the space. I’ve never owned a business in my life, nor do I come from an entrepreneurial clan—on the contrary. When my father graduated from Harvard, the first in his working-class family to go to college, his mother suggested: “Try the post office. It’s secure.”

But my publishing experience taught me that if I don’t risk, I won’t gain: One of my biggest successes is by a detective novelist who was turned down by over sixty people before I tried to buy his book.

Over an exasperating two years marked by construction delays and repeated disappearances by our contractor—a far-from-linear storyline—I transform the former antiques store into a cozy neighborhood gathering spot, where we host book readings as well as musical performances and art shows. The coffee shop becomes my “clean, well-lighted place” after I lose my publishing job in a corporate shake-up.

As a freelancer, I work on stories of crime, betrayal, and often, redemption. Sometimes I even help authors rethink their premises: I become “a fixer,” looking for clues to creating more suspenseful narratives.

Often these stories wrap up neatly, but my own does not. I am not the heroine of a noir-tinged tale, but a small business owner struggling with shrinking margins, shifty appliance repairmen, and unreliable employees, not to mention, yes, crime.

The store is robbed of an entire month’s proceeds one night in what seems to be an inside job. In another incident, I am rousted from bed at 3:00 a.m. in the dead of winter when a drunken partygoer throws a rock through the store’s front window, creating a hole so big, you can crawl though it; there I am, less than heroically sweeping up broken glass in front.

Eventually the neighborhood attracts legions of Manhattanites looking for more space and a better deal. As the crime rate trends downward, fewer people exchange pleasantries on the street along with the latest news on tire slashings. The shared struggle that once created such a cohesive community begins to fray.

But it doesn’t entirely dissipate. Right before we lose the coffee shop’s lease after fourteen years in business, I head to the local Greek diner for a burger. Three men enter wearing Raiders caps and order burgers and fried onion rings. As they wait in front, a large red car pulls up and starts raining bullets up and down the diner’s façade. The men scatter at warp speed.

After they’ve gone, we all get up from the floor where we’ve been crouching and survey the room. The front door is a pile of shattered glass, but miraculously, no one is hurt. Once the counterman assures us the police are on the way, to a person, as if on cue, we sit right back down and resume eating lunch, with nary a word exchanged.

My burger isn’t even cold.

I still edit crime fiction, but the action on the page suffices now. Somehow, I’ve learned when to duck and how to cover. Was I trying to “fix” a neighborhood when I opened the coffee shop? In truth, it fixed me.

As noir author Dwyer Murphy put it in an interview: “The mysteries that capture your attention are always shifting, and while you’re not looking, they transform into something else altogether.”

In writing as in life, we stumble on, piecing together whatever clues we manage to uncover.

Patricia Mulcahy formed the editorial consulting service Brooklyn Books (www.brooklynbooks.com) after over twenty years in book publishing. She started as a temp at Farrar Straus and Giroux and left as Editor in Chief at Doubleday. Her authors included bestselling crime writers James Lee Burke and Michael Connelly. She is the co-author of It Is Well with My Soul: The Extraordinary Life of a 106-Year–Old Woman, by Ella Mae Cheeks Johnson (Penguin, 2010) and Making Masterpiece: 25 Years Behind the Scenes at Masterpiece Theatre and Mystery! on PBS by Rebecca Eaton (Viking 2013). She was “book doctor” for the bestselling The Good Neighbor: The Life and Work of Fred Rogers by Maxwell King (Abrams Press, 2018). Her writing has appeared in Publisher’s Weekly, The Rumpus, McSweeney’s, Dorothy Parker’s Ashes and in the anthology Brooklyn Noir 3 (Akashic Books). She is a member of the editorial collective 5E (www.5eeditors.com) and a graduate of Wesleyan University. She lives in Jackson Heights, Queens, New York. 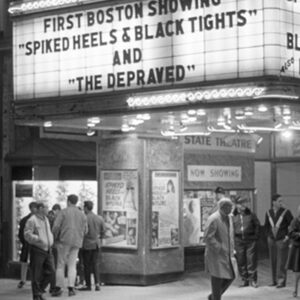 It was in Boston's most notorious neighborhood that Professor William Douglas met sex worker Robin Benedict. Their stormy...
© LitHub
Back to top