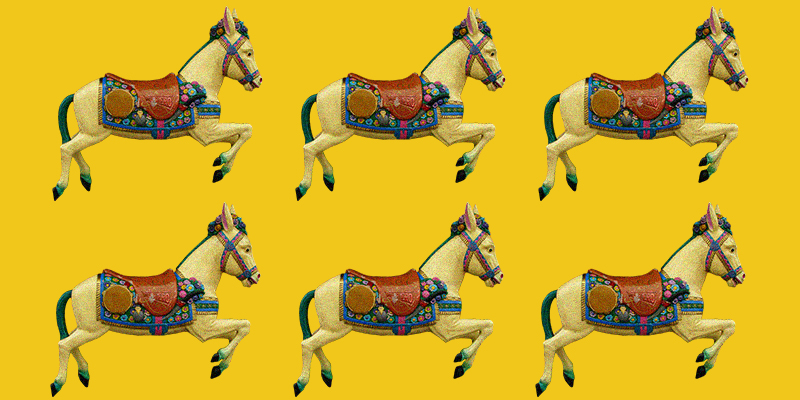 When I was a little girl, on Saturdays my mother made me take off my jeans and Keds and don a frilly dress, my Sunday shoes, ruffled socks, and white gloves. This was to go shopping in downtown Nashville. Mama loved to shop. I realize now that was because she had been raised so poor that store-bought was about the best thing in the world for her. I, however, hated shopping and I hated those clothes. But I loved Harvey’s. There were other department stores on Church Street, and we shopped in them, too, but Harvey’s was the best by far. It had a cage full of monkeys that climbed, screeched, and scratched while you ate lunch, and it also had escalators. They were the first I’d ever seen and the first, I think, in Nashville, maybe in all of Tennessee. But even better, in the area between the down and up escalators were carousel horses. They all were brightly colored with golden saddles or blue ones, red harnesses or green ones, and manes that could be either white or brown, curly or straight. Those wonderful horses turned their painted eyes on me as I slid up and down spying them just as closely. I felt we connected.

But every child I knew loved those horses, and a lot of the adults did, too. That’s because they’d been salvaged from and old trolley park and zoo, Glendale, which Nashville-raised adults had attended. My mother was from Oklahoma and my father from Kentucky, but my schoolmates’ parents had played and courted there, and so had their grandparents, and even their great grandparents. The park zoo, so I heard, was a marvel. It had that carousel, a skating rink, and a bandstand, as well as a casino that hosted vaudeville shows, Wild West shows, and eventually moving pictures. It also had fields for picnicking and racing, bird cages six stories high, and animals galore—diving sea lions, baby bears, sacred cattle, wild cats, and alligators to name a few.

It so happened that my very own neighborhood was built over the grounds of that old park zoo. The elementary school I went to was named Glendale. And when I walked home in the afternoons, I crossed a double line of trees that had once shaded the trolley line people took from Nashville to get there and to go home. During my childhood those trees didn’t seem all that special to me. But ask an adult about them, and their eyes would grow misty.

And I did get curious about Glendale. It would’ve been hard not to. As I grew older I found out that a cave in the front yard of a house on the far side of Lealand Lane had been the site of the bears’ cage. Later still, I discovered two yards close by had steps that went nowhere, but in the past had led into Glendale and into one of the attractions. But as a kid, really my imagination was mostly centered on the animals. And my gang and I all believed that an old tree on the edge of my next-door neighbors’ property had been the site of the rhinoceros or hippopotamus compound. I say either one because at the time we didn’t know which, and if truth be known we also probably didn’t know the difference.

However, we were big diggers of holes. As I recall that was primarily because we had seen on TV that holes camouflaged by long grasses were wonderful death traps for enemies. And we had enemies; particularly one I won’t name here because he could still be alive. (We never were successful.) But we also dug holes for other things. One of them was at the base of the rhinoceros/hippopotamus tree, because, somehow, we got the idea that it was planted over a carcass.

And, lo and behold, it was. We dug out a huge shoulder bone. It was so big it scared us, and one of us ran to get a father. Mr. Parrish was his name, and he inspected the bone and affirmed it belonged to a large animal. But he didn’t know what kind. I wanted to show it to my own father because between graduating from high school and joining the Army he’d been a butcher. Mr. Parrish sold insurance. There was no reason for him to be able to tell a rhinoceros shoulder from a hippopotamus one. But, for a cause I can’t remember, Daddy wasn’t around. And Mr. Parrish, who was a devout Catholic, told us it was disrespectful to dig up the dead and to put the bone back in the ground. I wasn’t too happy about that, but I suspected Mr. Parrish knew more about God than I did and two or three of my fellow diggers were his children.

So I had to go to bed not knowing what kind of animal that tree covered. And that always sort of bugged me. For decades, actually. So when I started researching When Two Feathers Fell From the Sky, I was on the lookout for mention in print of large African animals at Glendale. I found only one article. It’s a tongue-in-cheek piece from the Feb. 23, 1926, The Nashville Tennessean, and I’ve quoted it here, satirical spelling and all: “(Mr. Benson) tells us each summer of the delights of Glendale Park, its caged monkies, its sea lions, its blood sweating behomoth, its pizen reptiles and its chiggers.”  A blood sweating “behomoth” is always a hippopotamus.

I set When Two Feathers Fell From the Sky in 1926 because I found that proof of a hippo’s existence at Glendale in that year. And I named the hippo Dinah after a hit song of the time. But, also, according to The Tennessean, on Saturday July 16th 1926, over in that bears’ den, a cinnamon bear named Tom Noddy had a problem in a bathtub. I won’t say what that problem was, just it was shrouded in mystery. And that it seemed to me that somebody needed to solve it. 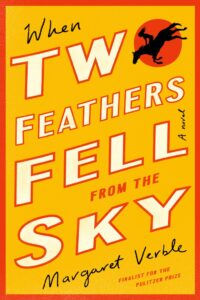 MARGARET VERBLE is an enrolled citizen of the Cherokee Nation of Oklahoma. Her first novel, Maud's Line, was a finalist for the Pulitzer Prize. Her second novel, Cherokee America, was listed by the New York Times as one of the 100 Notable Books of the Year for 2019. Her new novel, When Two Feathers Fell From The Sky, is now available. She lives in Lexington, Kentucky. 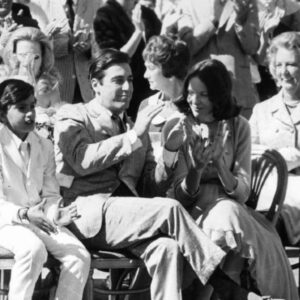 Like all of my mob-drama-obsessed brethren, I anxiously awaited The Sopranos prequel, Many Saints of Newark, which aired...
© LitHub
Back to top