Of Mice-Detectives and Men:
In Praise of
The Great Mouse Detective

Are you a man or are you a mouse-detective? In the animated oeuvre from Walt Disney studios (which includes a representation of one such “mouse detective”), qualifications for the latter might include being especially loyal, or kind, or indefatigable. But more than anything, to be a mouse-detective, according to Disney, you have to be especially brave. I feel safe in asserting that Disney films have long been responsible for the twentieth century’s most positive representations of the vermin community in general, from its mascots Mickey and Minnie Mouse, to the tiny helpers in Cinderella, to the triumphant heroes of The Rescuers, to the tiny faithful mouse friend in Dumbo, to the starry-eyed rat-chef of Ratatouille. All of these characters, varied though they are, are united along the notion that mice will come through where mere humans cannot; what they lack in size, they exponentially make up for in heart.

But does being a mouse-detective mean something more than simply being a mouse, asks Disney’s now-beloved 1986 film, The Great Mouse Detective, which opened to underwhelming box-office numbers despite decent reviews. The film’s eponymous sleuth is Basil of Baker Street, a chipper genius of a mouse who lives in a tiny apartment below the real Holmes’s flat, at 221 Baker Street in London, circa 1897. It’s worth repeating that Basil isn’t simply a rendering of Sherlock Holmes in a universe remade with mice; he’s the mouse counterpart to a coexistent human Holmes. Everyone human here has a mouse counterpart. Dr. Watson has the portly, jolly mouse Dr. Dawson. Holmes’s landlady Mrs. Hudson, has her equivalent in the mouse Mrs. Judson. And there is even a mouse version of Queen Victoria, living below Buckingham Palace.

Thus, the film, which is based on the Basil of Baker Street novels by Eve Titus, suggests a funny narrative mise-en-abyme: positing that there is a tiny, mouse-centric parallel universe existing within our world at the same time. If the film’s logic prevailed in real life, as I write this—sitting outside on a wooden bench—there might be a tiny mouse version of myself sitting underneath this very bench, holding a scrap of paper and a very small pencil, scribbling away. 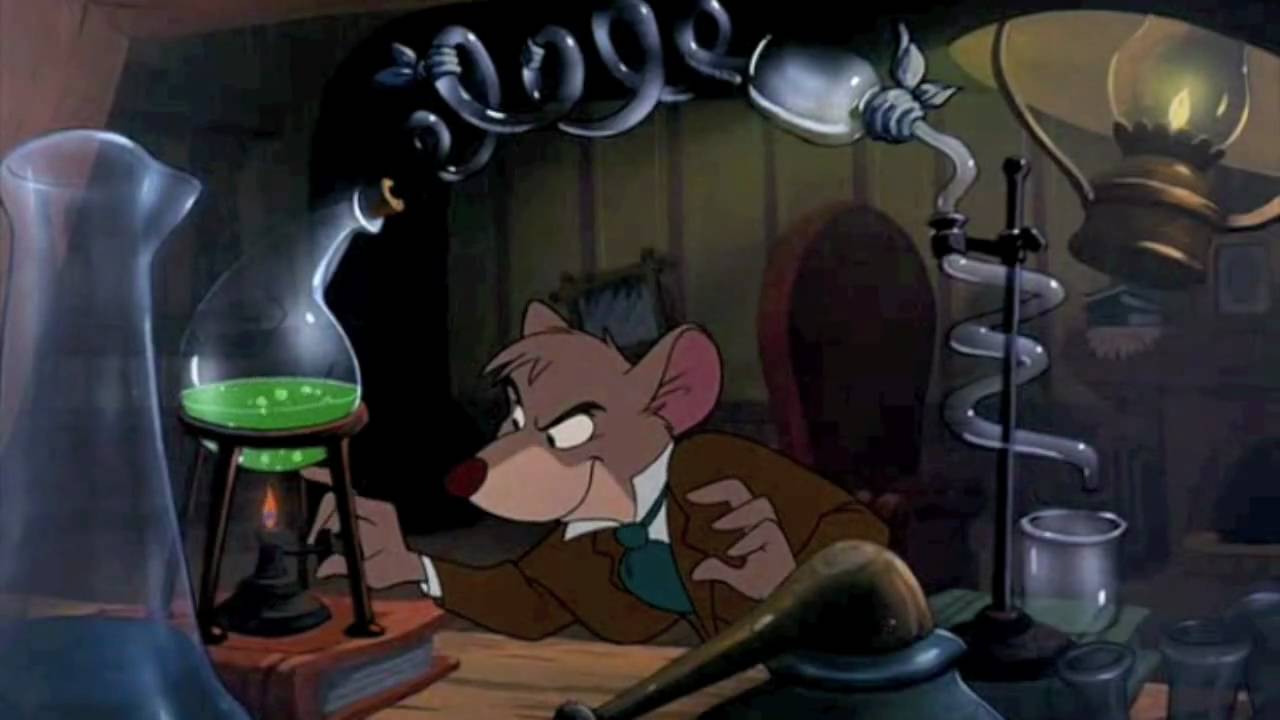 I like that The Great Mouse Detective isn’t simply a retelling of Sherlock Holmes substituting mice for humans; insisting on a human Holmes and a mouse-Holmes means that, while the human Holmes is able to solve difficult crimes, Basil must work even harder to do so (even while forming the same logical conclusions), because he’s a fraction of Holmes’s height and has a fraction of his strength: he’s a mouse in a human’s world. Like all the mice in the Disney oeuvre, he must negotiate his way through world of objects too large for him, creatures waiting to step on or eat him. The amount of effort that Basil of Baker Street must offer is vastly more than his human version, since Holmes has the comfort of being clever in a world built for his kind, and Basil does not.

I find this to be an especially compelling gambit especially in the pantheon of Sherlock Holmes adaptations and derivatives; whatever else we associate with Holmes (all-around cleverness, impressive deductive faculties, extensive scientific and anthropological knowledge, etc), I don’t find that we often associate him with effort. Or, visible toil. In fact, the allure of Sherlock Holmes seems precisely to be his effortlessness.

Directed by Jon Musker, Ron Clements, Burny Mattinson, and Dave Michener, The Great Mouse Detective (which was renamed The Adventures of the Great Mouse Detective for its theatrical re-release in 1992), is a story of grappling with scale. Literally, what follows in the film is Basil’s hardest case, and his greatest exertion. Basil is no armchair detective, and while neither is the real Holmes, Basil’s adventure—his most challenging one yet—takes him to the heights and depths that feel rather unforeseen for the Holmes we know. Yes, Holmes wrestles Moriarty along the side of the Reichenbach Falls in Switzerland (using the amalgamated martial art “Bartitsu,” which is part jujitsu and part boxing, to fling Moriarty over the cliff) and chases the hound of the Baskervilles through the Devonshire moors, but Basil throws together a makeshift hot-air-balloon and flies it to the top of Big Ben, which is insanely high up even if you’re not a mouse. 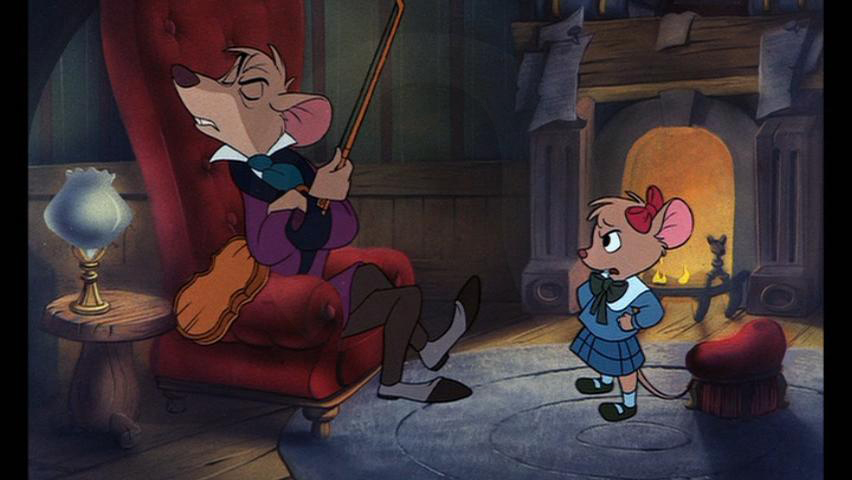 Basil’s development is marked by this kind of grand displacement: he comes a long way, literally and emotionally, by the end of the movie. What happens is, a little, Scottish girl mouse named Olivia Flaversham watches her kindly, toymaker father kidnapped by a sinister, peg-legged bat. Terrified and alone, she attempts to track down the famous Mouse Detective, Basil of Baker Street, when she is intercepted by the kindly Dr. David Q. Dawson, an obliging chap and ex-army surgeon who has (as Basil deduces, when they meet), just returned from military duty in Afghanistan.

When they arrive at the detective’s quarters, Basil, hyper and obsessed with his research, reveals himself to be disinterested in being hired by this child… until he realizes that her father’s disappearance is connected to the movements of his greatest foe, Ratagan—a giant, debonair rat who’ll kill you if you call him one. He’s voiced—to diabolical, silky perfection—by an elderly Vincent Price. Once Basil learns that Ratagan is behind Olivia’s father’s disappearance, he springs into action, bringing Dawson and Olivia along for the ride (a literal ride, aboard Holmes’s dog Toby, whom Basil summons from upstairs). By the end of it, he’ll have developed a soft spot for both Little Olivia and Dawson, lovingly embracing the girl and shyly asking the good doctor if he will become his partner, going forward. 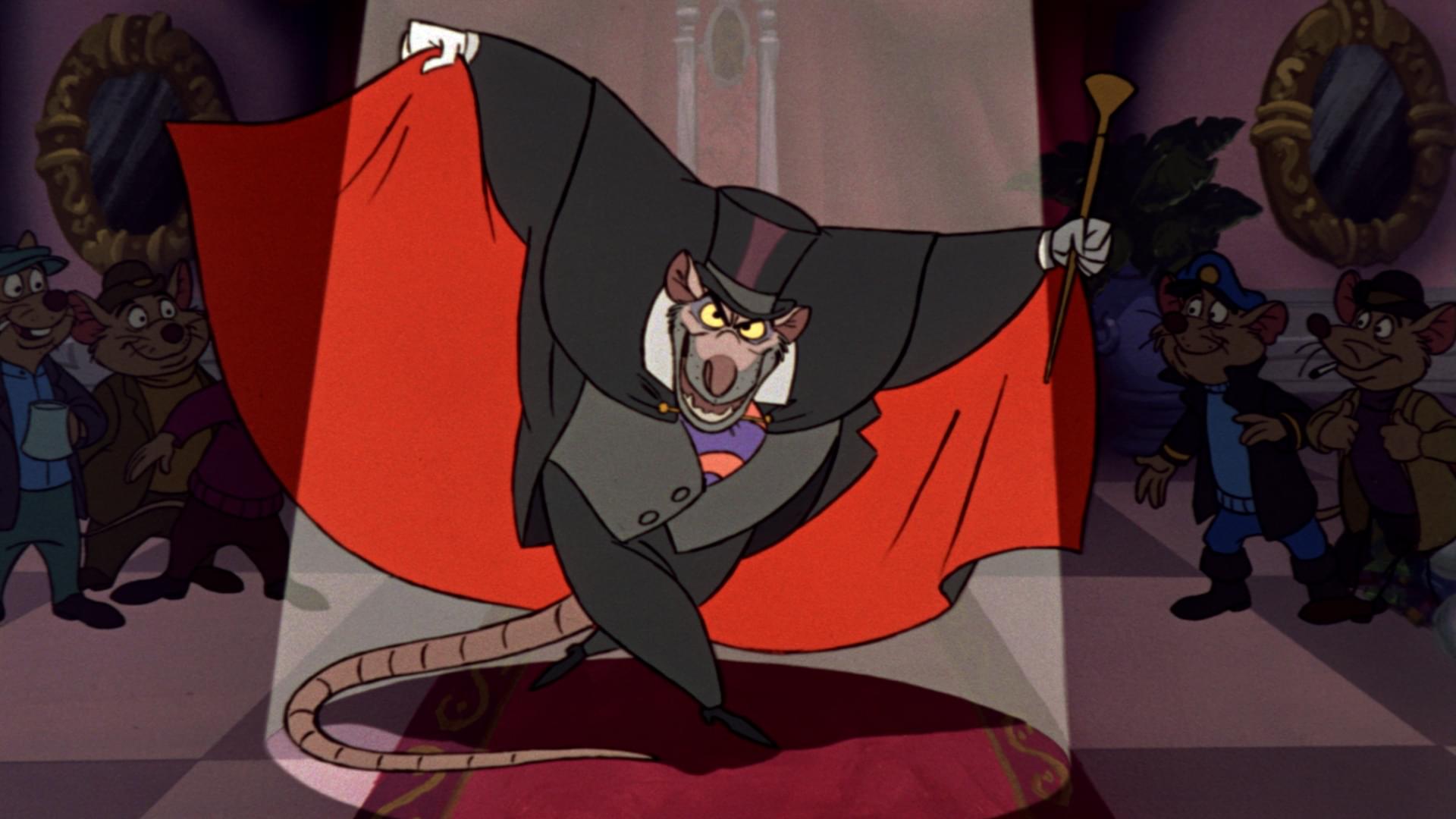 One of the great amusements of The Great Mouse Detective is its surprising verisimilitude: in this mouse-sized duplicate universe, it’s fun to pick out little references to the Holmesian canon. There are the obvious connections (Basil’s penchants for disguises and violin-playing) and the amusing references (Basil’s own name, harks to the great Basil Rathbone, who famously played Sherlock Holmes in the 1930s and 40s, as well as to one of the literary Holmes’s own aliases; in “The Adventure of Black Peter,” we learn that Holmes also goes by “Basil.”) There are near-verbatim lines, such as when Basil identifies Dawson’s career (which Holmes does in the opening novella, “A Study in Scarlet”). More charming still is that when we overhear Holmes, upstairs, talking to Watson, we actually hear Basil Rathbone’s voice; though the film was made after Rathbone’s death, it loops a bit of dialogue from a recorded production of “The Red-Headed League” decades earlier).

But just as it plays with similarities, The Great Mouse Detective finds its greatest strength in contradictions. The thing that makes Price’s charming, delightfully evil voiceover for Ratagan extra fun is its associated hallmarks of elocutionary suaveness and his scary-movie-career; Ratagan is a filthy vermin (a monster, we will eventually see) determined to exude airs of good-breeding and grandeur, a walking contradiction if there ever were one.

But the whole conceit of The Great Mouse Detective is propelled by a contradiction: that a mouse, a tiny mouse, might succeed when up against dangers far larger, proportionally, than any human would ever have to encounter. If The Great Mouse Detective has a thesis, it’s distinct from that of the Holmes stories; this film is about working hard to succeed in the areas that one is not naturally predisposed to succeed in. Holmes and Basil might be skilled chemists and investigators and whatever else, but Basil is at the greater disadvantage. It’s simply harder to be a giant—a legend, even—when you’re the smallest one. And you have to be very brave to pull it off. 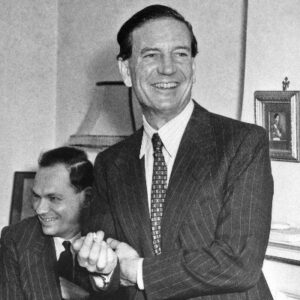 London, April 1946 The war in Europe had been over for nearly a year. Churchill, the victor, had been thrown out of office...
© LitHub
Back to top