Britons have long had a fascination with ruins. For Anna Lee Huber they're the start of mystery novels.

Ancient ruins have long held a fascination for me, as they do many people. There’s just something about the crumbling remnants of an age and culture long past that sparks the imagination. That makes us wonder. What was this place? Why is it now in shambles? Who inhabited these walls? What happened to them?

Our creativity thrives on such ponderings. It’s partly morbid curiosity, and partly our drive to make sense of the world around us. With or without the facts, our minds will endeavor to fill in the holes. Which is why they feature so often in books. They’re a fertile canvas to build our stories upon.

As such, I’m not the first to utilize the Roman ruins left behind in Britain. Many authors before me have been also been captivated by the atmospheric remains scattered across the entire breadth of Britain, save the far north of Scotland, and the history behind them. There is much to be intrigued by. From the remnants of the Romans’ magnificent baths at Aquae Sulis (modern-day Bath) and the lost town of Silchester shrouded in the tall grasses of the Hampshire countryside, to the enormous engineering feat of Hadrian’s Wall stretching across the wilds of Northumberland, to the cache of late Roman silverware found at Trapain Law in East Lothian and the traces of Roman marching camps discovered as far north as Moray Firth. New sites and artifacts are being unearthed all the time, sometimes layered with the evidence of earlier Neolithic and Iron Age settlements, or later Saxon, Norman, and medieval villages. Britain’s soil still holds the secrets of its ancient peoples and empires, offering it up bit by bit as the years pass, be it via a farmer’s plow, a metal detector, or a WWII bomb. It is rich fodder for writers’ brains.

My particular interest in Roman history intersects with their interactions with the Celtic and Gaelic cultures of northern Europe and Britain. I was initially intrigued because these are the areas from which my ancestors hailed, and so I wanted to know more about them, and the changes that were wrought by their Roman conquerors. But having the opportunity to visit several Roman ruins when I toured Britain also gave me a new appreciation for the Romans’ engineering, organization, and artistic sensibilities. So when I began plotting the fourth Verity Kent novel, and the idea occurred to me to send my characters on a sort of National Treasure meets Indiana Jones style treasure hunt across Britain in a race to outwit the bad guys, I knew the interconnected sites I would send them to had to be Roman ruins. This way I could indulge myself in another era I love, and also delve into another topic of interest—archeology.

The field of archeology is a relatively modern endeavor. Prior to the late nineteenth and early twentieth centuries, little care was usually taken to preserve and document ancient sites. There were incidences of historians and antiquarians helping to uncover a discovered site and recording their findings, but far more often sites were essentially looted and then either neglected or ignored, left unprotected to be damaged and destroyed by livestock, exposure to the elements, or building projects. It wasn’t until the late nineteenth century that a more scholarly and conscientious approach to studying these sites and preserving them was adopted and embraced. Indeed, the term archeology as the scientific study of ancient peoples and past civilizations wasn’t even adopted into English until 1825. So, I quickly discovered one of my struggles in using Roman ruins in my 1919-set novel would be figuring out which ruins had been discovered by this point in time, and in what condition they were in.

I began with the Isle of Wight, near the home of the creator of the book’s treasure hunt, and one of the earliest areas of England subjugated after the Roman invasion of Britain began near Richborough, Kent in AD43. The Isle of Wight also happens to boast the remains of several Roman villas that contain some rather remarkable mosaics. In particular, one of a peculiar cockerel-headed man at Brading. Better, the villa had been uncovered in the 1880s, and even more providentially, the owners of the land had constructed a shelter over it to protect it from the elements. Innumerable Roman mosaics have been lost to the ravages of Britain’s weather, farming, animal activity, and building projects. Near Stroud, a spectacular Orpheus mosaic was uncovered under a graveyard, chunks of it being revealed and destroyed whenever graves were dug. Another mosaic was discovered at Newton St. Loe in Somerset during the construction of the Great Western railway. Happily, the project was paused long enough for the mosaic to be lifted. It was then set into Keynsham railway station for a time. The luckiest of mosaics were either cared for properly in situ, or barring that, simply recovered by a thick layer of earth.

As was done to the mosaic in the villa at Littlecote Park in Wiltshire, which served as inspiration for the manor Littlemote House in A Pretty Deceit. The noteworthy mosaic at the Roman villa at Littlecote was uncovered for a time in 1728 and even recorded in an embroidered tapestry, but it was then recovered by dirt and presumed lost until it was exposed again in 1978. Although in the two hundred-fifty years between excavations it had suffered considerable damage, at least the mosaic had not been entirely obliterated. As was the fate of the two celebrated mosaics found in the late eighteenth-century in an orchard near Caerwent, Wales, which were left to the mercy of the brutal elements.

The other Roman ruins I chose to explore were the remains of the Saxon shore forts. Although many of these forts now lay some miles inland or alternatively have sunk into the sea from erosion, courtesy of the changing shore line of Britain over the last 1600 years, they once guarded the east coast of England from the Wash to the Solent, defending Roman Britain from the threat of invaders from the sea. Chiefly, Saxon raiders, who began encroaching into Britain as the Roman Empire began to decline. By the year AD408, Rome had abandoned Britain, leaving its Celtic tribes to fend for themselves against the Picts and Scots tribes encroaching from the north and the Saxons and Angles from across the sea to the southeast. As we know from history, the Anglo-Saxons eventually prevailed, ruling Britain until the Norman Conquest in 1066. But this tactical line of forts along the coast would prove to be a maneuver utilized by Britain numerous times over the next 2000 years, including the Martello Towers constructed to defend against a possible invasion by Napoleonic France, and the pillboxes and gun emplacements used against Nazi Germany.

Though there is some debate as to the exact identity and location of some of the Roman’s Saxon shore forts, there are widely accepted to be twelve locations along Britain’s coast. For the purposes of my story, I chose to mostly focus on the fort at Burgh Castle because of its strategic location, the heft of the remains that still exist today, and its stolid presence in the quiet, wind-swept landscape of East Anglia. Burgh Castle was also the site where some of the latest dated objects that can be associated with Roman Britain were uncovered in 1962—a horde of exquisite, late-fourth-century glass vessels and bronze dishes, created shortly before the Romans abandoned Britain. And it allowed me to make mention of the great Celtic warrior queen Boadicea (Boudica) of the Iceni tribe, whose domains included a large portion of East Anglia.

When Boadicea’s husband died, Rome took exception to his kingdom being divided equally between the Roman emperor and the Iceni king’s own daughters. So the Roman military seized Iceni property, flogged Boadicea, and raped her daughters. Enraged by the Romans’ abuses and degradations, she led a rebellion against them in AD 60 or 61, rampaging through the southeast, sacking Roman London, and decimating the 9th Legion. But the revolt was short-lived, and Boadicea and the Iceni were soon defeated by the 14th Legion and other Roman forces, who had marched back from Anglesey in the far northwest of Wales specifically to crush the uprising. Boadicea drank poison and killed herself rather than be captured.

So I knitted these pieces together, along with many others, to craft a treasure hunt worthy of a woman of Verity’s wit and skills, and to allow readers to journey along on this intriguing quest through more than one era of Britain’s past. There are hundreds of interesting Roman ruins and artifacts dotted throughout Britain—not just in the tourist meccas of Bath and along Hadrian’s Wall—and more are emerging every day. You simply have to dig a little deeper, explore a little farther, and slip into the hidden corners of Britain’s history to find them—an adventure in and of itself. 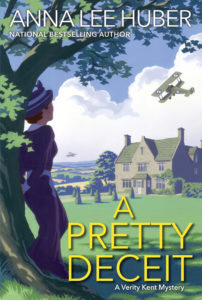 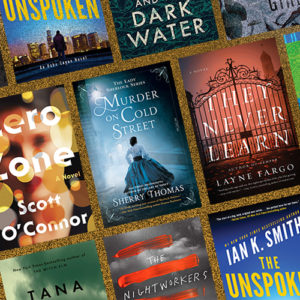 In recent years, October has begun to challenge summer as the high season for crime fiction, mysteries, and thrillers. This...
© LitHub
Back to top