Rebecca is headed to Netflix, Bly Manor is haunted, and HBO is having rich people problems.

October is here, which means a few of the series that went into production tailspins during the early days of the pandemic have finally been finished and are ready for consumption. It also means lots of gothic stories. This is the month where the lines between crime and horror get especially blurry. Coming up we’ve got big ticket HBO series, Netflix remakes of iconic novels, and also some British stuff, because over there they never quit making mysteries. Enjoy!

This one sort of looks like a bunch of British people watched Big Little Lies and thought they ought to make a slightly less interesting and significantly less glamorous version of it wherever they could find the biggest seaside cliffs in their own country. But it’s a Masterpiece family thriller and you should probably call your mother and tell her it’s coming out this month.

An international finance thriller starring Patrick Dempsey bounced around European networks for a while and is finally heading to the States on…the CW? Does that mean precocious teens are going to be involved? I’m a little confused here but the gist seems to be an global banking cabal and some secret documents that will require good-looking people to do some globe-trotting, so I’m basically in, how about you?

The Haunting of Hill House was such a success the powers-that-be at Netflix decided why not spin this thing out into an anthology series? So that’s what they did. Creator Mike Flanagan is back with a few of the old castmates, including Victoria Pedretti, along for the ride, and this time they’re adapting a Henry James novel. It would seem they’re going to work their way through some portion of the canon of American gothic fiction, and really that sounds good.

Fifty Shades of Manderley seems to be the vibe director Ben Wheatley is going for with his new adaptation of the Du Maurier classic, famously brought to screen by Hitchcock eighty years ago. The new Netflix film stars Lily James, Armie Hammer, Kristin Scott Thomas, and one hell of a country estate. The production value looks pretty lush and Scott Thomas is a worthy actor for the meatiest role.

A new psychological thriller about wealthy people coming undone in the aftermath of a crime comes from David E. Kelley and Nicole Kidman. This time their sites are trained on the East Coast elite, and they have Susan Bier, who directed Bird Box and The Night Manager, directing every episode of the series. They also have Hugh Grant as the husband and Donald Sutherland as a patriarch defending his family empire. HBO is banking that this is the next big thriller to get everyone watching and talking.

This late Cold War German spy series that also doubles as a celebration of pop culture and also a subtly subversive story about identity and awakenings marches on into its third season, another three years later and now on the brink of social and political collapse. If you haven’t watched yet it’s worth your time. The only trailer I could find was from Amazon Prime’s Euro-streamed version, so hopefully you speak German because there are no sub-titles. By the time it gets to Sundance later this month, there will assuredly be subtitles, unless the audience for this one is even more niche than I remember. 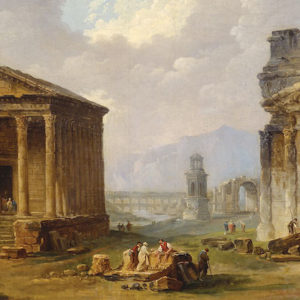 Ancient ruins have long held a fascination for me, as they do many people. There’s just something about the crumbling remnants...
© LitHub
Back to top