"Ideas alone can be abstract and bloodless, but they come alive when they are woven into a narrative."

When I taught courses in philosophy and literature, I included both stories written by formal philosophers (that is, those who had earned relevant degrees and whose theoretical works were also taught in the discipline) and novelists whose plots and characters are so suggestive of familiar philosophical issues that one could easily tease the theory out of them. There are more of the latter than the former, but there are two advantages to considering the philosopher-novelist. When a story contains ambiguities and permits alternate interpretations, you might consult the straightforward philosophical writings to decide which understanding of the story is well-founded. Secondly, one can compare the styles of theoretical vs. narrative writing, asking which is more effective in putting across an idea.

Why would a philosopher try to put ideas into narrative form? Why not just stick with the essay, the monograph, the lecture? Formal philosophy sometimes employs terms and references that render a text hard-going for a lay (or any) reader. With a fictional vehicle, character, plot, and dialogue can convey ideas free from the encumbrance of dense theory. Ideas alone can be abstract and bloodless, but they come alive when they are woven into a narrative. A philosopher might employ the power of a story to carry the reader into a world of ideas—indeed, a world where ideas actually propel plots.

Existentialist philosophers often took advantage of narrative forms to explore ideas about consciousness, freedom, and responsibility, including the avoidance of responsibility that famously goes by the name of “bad faith.” Sartre’s plays and novels present theoretical perspectives that are deepened with a consultation of his philosophical treatises. Consider, for instance, the famous concluding line of his play, No Exit: “Hell is other people.” This might sound like the sort of anti-social quip one might deliver after a boring cocktail party. But “other people” refers more deeply to les Autres—Others. That is, other consciousnesses, whose gaze can reduce one to an object, and can also challenge self-deceptive attempts to sugarcoat wrongdoing from self-aggrandizing lies to murder. Consulting passages from his tome, Being and Nothingness, aids confirmation of the unsettling idea that there is no escape from one’s own freedom to choose and responsibility for having chosen.

Sometimes the momentum of a story overpowers the ideas that frame the plot, as might have been the case with Simone de Beauvoir’s own exploration of consciousness in She Came to Stay. This long, exceedingly complex novel is populated by characters who can be read as representing various aspects of bad faith. Readers often automatically adopt the perspective of a main character, so we are likely to assume that Françoise is a vehicle to express Beauvoir’s own views.

Françoise does a good deal of rumination about her own consciousness, a constantly moving beam of attention that brings the external world into reality for her. Trusting your own point of view is pretty comfortable if you encounter few radically divergent opinions, but when Françoise meets Xavière, a young woman whom she attempts to befriend, she discovers a person whose goal in life seems to be to undermine everyone around her. Xavière complains, entices, insults, betrays, steals lovers, lies, and offends—all in the name of her own freedom.

From an existentialist perspective, freedom is the foundation of value, because it is by acting freely that one engenders values that are sustained and meaningful. But Xavière is a hostile consciousness who is incapable of acknowledging the values of others, not only ignoring but even seeking their extinction. Her political, social, and personal offenses accrue, and both Françoise and the reader begin to hate her. Françoise concludes that there is only one solution. She turns on the gas in Xavière’s flat and leaves, knowing that the latter has taken a powerful sleeping pill and will now never awake. Françoise’s final words seem to affirm her act: “I have done it of my own free will.”

So vividly is the hateful Xavière depicted, that the reader may well cheer her dispatch, at least at first. But then there is a moment of doubt. Surely Beauvoir would not justify murder, would she? My students were baffled, and only by consulting Beauvoir’s philosophical texts could we be confident that Françoise was not an existentialist exemplar. It is a novel with a metaphysical point worked out with a physical act, and it is quite difficult to sort out its “moral” without consulting the author’s formal philosophical writings.

Beauvoir herself was disconcerted by the ending she had penned. She reflected on this novel for decades, unsure if she had successfully presented the dire consequences that ensue when different subjectivities conflict and do not acknowledge reciprocity with one another. But for all her dissatisfaction with the ending, she declared repeatedly that she had found the murder necessary. Her critics and biographers still debate the meaning of these proclamations. One explanation (admittedly a bit simplistic) is that the power of the plot simply overtook the philosophy. Writers often remark that their characters sometimes behave in unexpected ways. Maybe Françoise did just this.

Beauvoir wrote a story in which a theory provides a reason, however misguided, to kill. Here is another, in which an actual book of philosophy is both motive and means for murder.

Umberto Eco was a philosopher, semiotician, essayist, and novelist. He specialized in the European middle ages, the time period of his first novel, The Name of the Rose, set in 1327 at an Italian monastery. (The novel was turned into a motion picture in 1986). It is a demanding book (and an only slightly less demanding movie), which could be read as a primer for scholastic metaphysics, a guide to heresies, conflicts over faith vs. reason, scientific method, the stability of meaning, and the nature of truth. The chief protagonist, William of Baskerville, refers frequently to Thomas Aquinas, Roger Bacon, and William of Occam, and he occasionally express his thoughts in long passages of untranslated Latin. Despite the unusual challenges required of the reader, Eco manages to present an intriguing mystery novel full of murders, thefts, and misdirecting clues.

Spoiler alert for what is to come.

There are many acts of wrongdoing in The Name of the Rose, but the chief crimes are themselves philosophies. Theories are prosecutable as capital crimes when they are heresies, heterodox interpretations of the doctrines of Christianity. Thus it is fitting that the central mystery of the story involves a book and an idea. Not just any book but one by the philosopher whose works so influenced Scholasticism and the development of Christian doctrine: Aristotle.

Books abound in the abbey’s labyrinthine library, which becomes of the site of William’s detective explorations. As it turns out, the library contains the only remaining copy of the second half of Aristotle’s Poetics. The first half, on tragedy, is well known; the missing portion on comedy is lost—except for this one copy. This is a tantalizing plot element, for the first half of the Poetics on tragedy influenced not only western philosophy but also literature and drama for centuries, prompting avid curiosity about what Aristotle might have said about that other classic dramatic form, comedy.

An ancient monk, driven mad by his own theories about Jesus and the necessity that divinity exhibit only seriousness, has found the book—a manuscript that contains the long lost text. But he decides that it must not be read lest it support the idea that Jesus might have laughed. Unwilling to destroy a book, he smears its pages with poison, rendering it lethal to anyone who dares to read. The book is thus both motive and means for murder. We only discover this at the very end, as the library and then the entire monastic complex are consumed by flames, and both William and the reader are appalled to witness the destruction of a missing book of Aristotle.

As any lover of novels knows, a story can grip the imagination so intensely that for a time the fictional world becomes as vivid as the real one.  I suspect I’m not the only reader who was genuinely if fleetingly appalled that this missing text was destroyed (Oh no, what did it say?), forgetting for a moment that the book has been lost for millennia, and any presence in the novel would be just another fiction. Captivated by the fictional world, I bemoaned the loss of a book—that doesn’t exist. 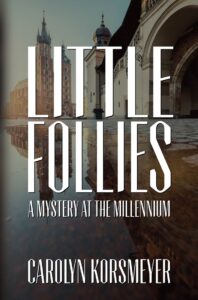 Carolyn Korsmeyer is both a novelist and a philosopher. She is especially interested in how the senses and emotions are engaged by works of art, themes prominent in three of her philosophy books: Things: In Touch with the Past, Savoring Disgust: The Foul and the Fair in Aesthetics, and Making Sense of Taste: Food and Philosophy. She is keen to explore the ways that fiction can revive lives from long ago by engaging the reader in the sights, sounds, smells, and tastes of the past. Her first novel, Charlotte's Story, imagines the life that Charlotte Lucas (of Pride and Prejudice) might have had after her hasty marriage. Little Follies is her second novel.

The Enduring Appeal of the Teen Detective 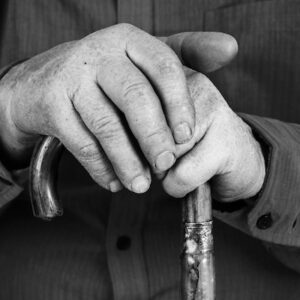 “These days I look like what I am. A graying, aging jock with bum knees and a busted nose that never properly healed. Flaming...
© LitHub
Back to top