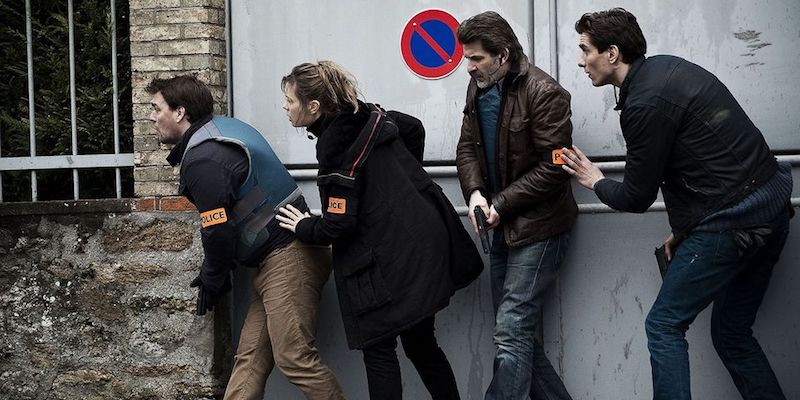 In “Meet Spiral’s Feminist Anti-Hero,” an article in the Guardian, Caroline Proust, who plays the hard-charging lead detective in the “hyper-realist” show that is “France’s answer to The Wire” describes how she ad-libbed an insult about couscous in an interrogation with Arab suspects, adding that “It’s good to show it, because it happens in real life.” The story goes on to explain that “[r]ealism is an obsession for Proust,” and that Spiral/Engrenages is “co-written by a police officer (under a pseudonym) and officers are on set to advise on everything from how to handle a dead body to how to fight with a superior.”

The series, now streaming its sixth season in the US, has enjoyed commercial and critical success, and “stunned executives by becoming the biggest-selling French TV show ever.” The many comparisons the show has received to The Wire are revealing, however, because while both shows feature multi-layered plots involving characters from different walks of life, The Wire created memorable characters regardless of race (I think of the drug lord Stringer Bell enrolled in a business course). Spiral, although it creates a compelling and complex female lead in Proust’s Police Captain Laure Berthaud, fails to open up the same possibilities for its non-white/minority characters. In fact, at key moments, Spiral abandons its otherwise meticulous plotting and undermines its own pursuit of an unvarnished realism by turning minority characters into types.

The clever twists and turns of the plot, the show’s setting in the underbelly of Paris, Berthaud’s relationship to her team, as well as my first exposure to the French judicial system with its “investigating judges” all combined to keep me binge-watching the first four seasons, never mind racially fraught moments that set me on edge. I tried not to project my own ideas of political correctness and “fair representation” on a TV series that wasn’t American, and on a society in which “being French” means assimilating a particular “French” set of social, cultural and linguistic beliefs and norms. I explained away the lack of ethnic diversity on the police force and in the judges’ offices on the show by saying to myself, maybe that’s how things are in France—and that by choosing not to include a minority character on Laure’s team, the producers were making a point. In Seasons Two and Four, the presence of Samy Aroune, an undercover North African officer, who becomes Laure’s romantic interest also helped somewhat. Just as importantly, while each season featured several non-white criminals—as well as several white ones, including Laure’s friends on the police force—because the criminals’ motivations made sense, and the complex plotting worked, I didn’t feel that the show was making a statement about the criminality of minorities in general.

At key moments, Spiral abandons its otherwise meticulous plotting and undermines its own pursuit of an unvarnished realism by turning minority characters into types.

In Seasons Five and Six, however, all that fell apart. Season Five opens with the discovery of the drowned corpse of a woman, Sandrine, tied to a child. Sandrine, the child, and the initial suspects are all white. And yet, it turns out that that she and her daughter were both murdered by a thuggish young black woman, Karen, whom her family had taken in as a foster child when they were both young. Karen’s motivation for killing Sandrine and Sandrine’s daughter, whom she adores, doesn’t seem strong enough, and both Sandrine’s parents and her husband seem to have more compelling and interesting reasons for killing her and the child. The choice of Karen—black and an outsider brought into the family—as the killer seems arbitrary and forced. The show tries to justify Karen’s lawlessness by indicating that she has a poor relationship with her own biological mother, and by portraying her thuggish nature—she beats people, she pulls the one white girl in her lawless “girl gang” who wants to reform back into the underworld, etc.—but none of that makes her a murderer. Karen would work well as a false lead, yet the narrative tells us that she’s the one who committed the crime. Because Karen doesn’t seem believable as Sandrine’s killer, she doesn’t feel like a guilty character who happens to be black; instead her it is her blackness that marks her as a criminal.

In her master’s thesis, Caroline Elizabeth Clasby writes that “by focusing on specific themes such as racism, the producers [of Spiral] have claimed that they are trying “to alter the racist and xenophobic views in France and inform people about the corrupted French police force.” It would be one thing if Laure and her crew were guilty of racial profiling when it came to Karen—that would fit in with the producers’ stated intent—but in this case, the narrative itself undermines that intent by engaging in the very kind of negative and prejudicial treatment that it seeks to highlight.

Season Six opens with the brutal murder of Mercier, a white cop. Laure finds out that shortly before Mercier’s death he was taking surveillance photographs of two young black men, the Camara brothers. She and her team are told by local police that the Camaras were formerly criminals but have now reformed themselves and become pillars of the community. After questioning white residents of a housing project who tell Laure and company that they were forced out of their homes by two black men, whom they identify as the Camaras, the team decides to surveil the brothers. After four hours of watching Camaras’ home, all they see is the brothers putting out garbage. Yet they tell the investigating judge that the dead cop was watching “two thugs.. violent guys… [who] run protection rackets and bully local residents. [The brothers] may be involved in Mercier’s death.” Laure even lies to the judge in order to obtain permission to keep following them.

To summarize: the police are engaged in an instance of racial profiling, and anyone who has watched more than two minutes of police procedurals and is familiar with the rhythm of crime shows would expect Laure’s hunch to turn out to be wrong. It’s just too easy and obvious, and she and her team are too confident and cocky about it. They have to get their comeuppance. Maybe the murdered cop, Mercier, was crooked and trying to frame the brothers because they’re black. Maybe the residents of the housing complex are nursing a grudge. But instead of exploring any other options, the plot colludes with the police, and it doesn’t take long before, voila, Laure and her team discover that the Camaras are still on the wrong side of the law.

I waited through the entire season for that initial finding to be proved wrong or toned down or modified in some way, but it never was. While many of the police’s other preliminary hunches (all to do with white characters) are reversed, this one is not. That violates the most basic pattern of crime storytelling—the initial hunch, if it’s that easy, is never correct. Or if the obvious suspect is really the killer, we go through a pattern of: it’s her, then it’s not her, and then finally at the end it is her again, perhaps for some reason we couldn’t have imagined before. But as for the Camaras, they’re always crooks. Laure doesn’t buy the story of them being reformed for even an instant. Yes, it turns out that they didn’t actually kill Mercier (his killer is a psychopathic gypsy no less—and the gypsies don’t get a fair shake in this season either), but the Camaras are involved in a litany of crimes that might be worse, including setting off race riots in the neighborhood under false pretenses, and killing off an informant.

Article continues after advertisement
Spiral is fiction, and yet, under cover of a gritty, no-holds-barred “realism,” it is constantly making choices—bold ones for its white heroine and her comrades, and disappointing ones for the minorities who have the misfortune to people its vision of multi-ethnic France.

When plotting abandons its usual rhythms for no good reason that’s when you can smell that something is off. That’s when you detect the prejudices seeping through—not of the characters towards each other, although that happens regularly, but of the show towards some. You could go through the season in detail and find other examples that stick out—for instance, the black informant, Depuis, who is brutally murdered as a result of being forced to cooperate with Laure and her crooked teammate Gilou, and immediately forgotten. Or the white couple who adopt a baby without paperwork and never have to face the consequences. Or the unnecessarily long moment when Laure first enters the police station in an immigrant neighborhood where Mercier used to work, and what we see and hear is a black woman dressed in African clothes loudly and ceaselessly berating a black boy.

That moment has no reason for being there. We never see the woman or child again, and we get a fine sense of the ethnic diversity of the neighborhood in the preceding sequence when Laure and Gilou drive through it. The woman and the boy are an example of what the police here have to deal with, as Herville, the police chief, explains to Laura and Gilou while leading them to his office (we can still hear the woman’s strident voice in the background.) “It’s different here,” Herville says. “We don’t fight crime, we empty a sea of shit with a teaspoon. Human misery, poverty, education failure, radicalization…You name it.” If the police chief’s comment is supposed to show his sympathy for those whom he is supposed to protect and his understanding that the situation is complicated, it does so at the expense of the woman and the boy, who are robbed of their individuality and reduced to types. Instead of being portrayed as people, the pair become a “situation” that at best the police have to explain away, and at worst—well, you see for yourself by the time the season is done.

What Spiral shows us is not unvarnished portrayal of “reality” (if such a thing is even possible), but rather, the reality of prejudice making itself felt through choices in the casting, mise-en-scène and storyline. The producers’ intent may be to depict the way in which the French system has failed its minorities, citizens as well as immigrants, but the way in which Spiral handles those injustices, particularly in Seasons Five and Six, ends up compounding them.

Further, the show repeatedly forgives its white characters, particularly Gilou, a member of Laure’s team and later her love interest, giving him second and third and fourth chances. The minority characters don’t have it so easy—none of them even have the luxury of even being repeat characters over the seasons, except for perhaps J.P, a vaguely Asian looking cop who is handy in the background; Gilou’s girlfriend, who turns out to be a liar; and Samy, the undercover cop—but he’s blown up at the end of Season Four. In the end, Spiral is fiction, and yet, under cover of a gritty, no-holds-barred “realism,” it is constantly making choices—bold ones for its white heroine and her comrades, and disappointing ones for the minorities who have the misfortune to people its vision of multi-ethnic France. 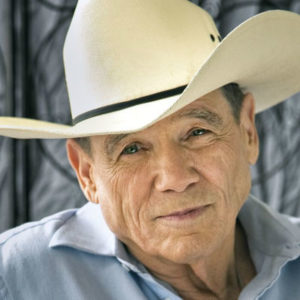 Every long-running crime series, I suspect, has a central feeling that keeps readers coming back for more. For James Lee Burke's...
© LitHub
Back to top