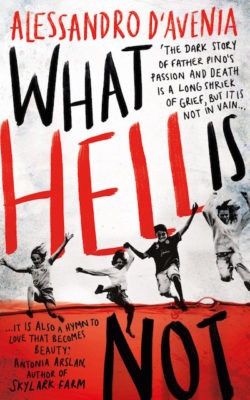 The following is an exclusive excerpt from What Hell Is Not, by Alessandro D’Avenia, translated by Jeremy Parzen, a Sicilian tale based on real events. In the following passage, Francesco dreams of a childhood not scarred by brutality as he participates in the killing of a dog wounded in a fight.

They are children like all children. But they have the uncontrollable sneer that strays have on nights when the sirocco blows. Francesco watches them. They laugh and he laughs, too. But he’s just pretending because he doesn’t want to feel left out.

The dog has a broken leg, a missing eye, and black liquid smeared on its side. He’s whimpering so he must have another hidden gash in his bag of bones. He’s as big as a German shepherd but he’s a mutt. You can tell from the unusual blend of colors and shapes he wears on his fur.

The apartment building is still under construction but has been forever abandoned to its mattresses and syringes. You can see roofs and uniform swaths of sky. Everything is rusted over and sharp, like the rods that emerge from cement blocks like iron bushes.

They drag the dog to the edge of what would be the kids’ playroom in the best of all possible worlds. That’s where he is supposed to lie down and dream of hunting and eating meat. Francesco wishes he were at school but this morning his mother didn’t drop him off, nor did she tell him to go on his own.

She didn’t even get up. And when she’s like this, all he wants to do is hit the streets. Last night, he heard her laughing until late. And then he heard her sobbing after she’d been left alone. He opens his eyes during the night and can hear his mother and the men who laugh with her. Then he closes and reopens them again to see if he’s dreaming. But even in the dark, the sounds are still there.

Now Francesco wishes he were at school with Ms. Gabriella. She smells nice. There are colored walls in that little classroom where you don’t have to listen to the creaking bones of an animal won in a dogfight by a man who bets on its pain. No, it’s not nighttime there. It’s far from the basements of Via Hazon. That dog doesn’t have a name. A fighting dog doesn’t ever have a name.

There’s a big poster on the wall of the classroom with a large letter D. And there’s a drawing of a dog that’s not bleeding and doesn’t have a broken leg. It’s a whole dog and it’s clean, the way things should be. It’s a dog with happy eyes. But everyone knows that at school they teach you things the way they should be, not the way they are. Francesco can see the red drool drop from the mutilated teeth of the dog with no name.

He closes his eyes and then reopens them. But the drool is still there, dripping. There is no mirage, no nightmare, and no miracle either. Everything is real in Brancaccio, for better or for worse. He’d like to call that dog by a dog name. But he doesn’t know any dog names. Pino does, for sure. He repeats this to himself, as if the dog could hear him. The first name that comes to mind: Dog. He’d like to see him get up again and be healed like the dog on the poster at school. But a dog can’t hear you if you just call him Dog. He could try Charlemagne, like the King of the Franks. That would be a perfect name for a dog. Everything is perfect, just the way it is supposed to be, on the posters at school: Cherries, gnomes, butterflies, fish, bottles . . . Ms. Gabriella knows some great stories about the drawings on the signs, like the one about the boy who is so good at swimming that he reminds people of a fish. They call him Colapesce, like the legendary Sicilian ‘fish man.’

One day, he stays in the water trying to find the bottom of the sea as everyone waits for him to come out. He goes to the beach when he’s worried that he will run into Colapesce. He’s afraid that he’ll see the fish man come out of the water. And that’s why he never swims far from shore. Then there is the story of the mermaid who wants to become a girl and she sprouts legs. But they are very sore because she’s never used them. Francesco loves these stories that mix men and fish and it’s not clear whether it’s a fish or a man or both.

His favorite time to go to the beach is when his mother comes with him and she puts on her green bathing suit and lets her beautiful hair down. Swimming underwater and opening his eyes and seeing all the things mixed up together the way they look when you open your eyes underwater. Then his eyes start burning. But he likes the silence underwater and he likes diving into the waves, under the waves, with the waves. The sea and his class at school are the only things that he likes.

Aside from his mother, everything beyond the posters at school is ugly. The houses don’t have roofs and white smoke coming out of the chimney tops. The dogs have broken backs and empty eye sockets. Cherries? He’s never even seen one, and bottles are used only for breaking with rocks.

And he’s scared. Especially when the hot wind outside is so strong that it makes the windows burst open. But he doesn’t have the courage to get up and go close them because maybe the wind will snatch him up and he will fly away. And he doesn’t have a dad who would go looking for him and bring him back home.

His friends kick the dog in its stomach and it makes a muffled gurgle. Then the dog whimpers and grinds its teeth. They break its ribs. Francesco doesn’t know how to repair a broken dog. The only thing to do now is for him to break it, too, so that nothing living and suffering is left. That would be worse than death.

He kicks it on its snout and it creaks. The trembling spreads from the tip of his foot all the way to the inside of his head like a whip cracking. The only way to shake it off is by giving the dog another kick and kicking harder and harder. And hell is when you no longer feel the pain of shattering something, when you no longer feel it in your spine, in your bones, in your head, in your heart. Hell is the anesthesia that makes you no longer feel the life in what is living. But Francesco has something that resists inside of him even as he kicks the limp, loose flesh.

He goes over the subjects in the posters, just as the teacher asked his class to do. Let’s repeat together. The letter B is for the bee that once stung him. The letter Z is for the zebra that reminds him of the Juventus soccer club and Roberto Baggio and how he wants to be like Roberto Baggio even though there are still some who prefer Schillaci. The letter F is for the frame that he would like to jump through. The letter E is for the eggs that he likes when his mom makes him zabaione with sugar. He can’t remember what the letter I is for. He just can’t remember it at all.

And so he just keeps on kicking and he seems like anything but a child. He and his friends quench their thirst with that crushing, wounding, and destruction. The dog’s missing eye opens with each blow, emptier each time.

Then they push the carcass over as it still gasps for life. They aim for a cinder block with the rods sticking out. The dog ends up on its side and one of the rusty iron rods punctures it, slicing through like a piece of paper. The dog moans hoarsely and falls back on the ground as his innards, now turned to mush, spill out freely. One last convulsion decrees the end to its instinct for survival.

The children shout. The dog is dead. Losers deserve to die. The children laugh. They cheer like crazy people who know only the game of making sacrifices to the faceless god of apathy.

Francesco opens the eyes that he had closed because of his fear. But it’s all still there and he can see blood splattered like fireworks around the dog as the flies and wasps began to flutter around it. He still can’t remember what I is for. He cheers as well because he doesn’t know what else to do. The mob mentality has swallowed him up and he can feel the buzz of destruction in his slender arms.

H must be for hell. But there is no hell on first-graders’ posters. If anything, there is F for fire. But hell and fire have nothing to do with one another. Hell is pure subtraction. Hell is taking away all the life and all the love from within.

New York: A City of Anti-Heroes 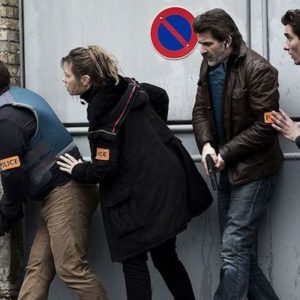 Why Spiral Doesn't Deserve To Be Compared to The Wire In “Meet Spiral’s Feminist Anti-Hero,” an article in the Guardian, Caroline Proust, who plays the hard-charging lead...
© LitHub
Back to top