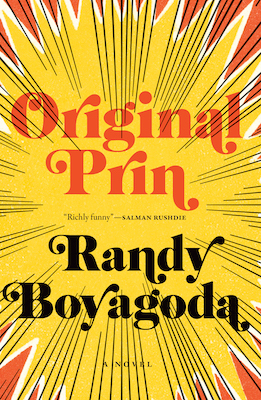 The following is an exclusive excerpt from Original Prin, the first in a planned trilogy from Randy Boyagoda. In the aftermath of Prin’s cancer diagnosis, Prin pledges to be a better father, husband, son, and Catholic. But when developers threaten to shut down his historic college in Toronto, he is reunited with his grad-school ex, and in a moment of divine inspiration, decides to go to the Middle East on a mad journey to save his alma mater.

Eight months before he became a suicide bomber, Prin went to the zoo with his family. Puffy and brightly balaclava’d, the six of them fanned across an empty parking lot. Ahead of them was a billboard advertising the zoo’s newest additions. Two furry gifts from China snuggled in the smiling Prime Minister’s lap, chewing bamboo shoots that pointed in perilous directions. Prin experienced a sympathetic twinge in his own groin. This was the day to tell them.

“The baby panda bears are turning into polar bears!” said his six-year-old, Maisie.

“I won’t eat them!” said his four-year-old, Pippa.

“Who wants a snack?” asked his wife, Molly.

He strode out in front, the family food bag slung across his back.

It was lunchtime, and they hadn’t eaten since more or less an hour before the Mass they’d attended at a plaster-walled church on the rusty eastern edge of the city. The church was fronted by chipped saints’ shrines and wedges of stumpy evergreen shrubs. Everything was fretted in winter road salt. The church was surrounded by an endless run of ethnic food stores and hair salons and paycheque-advance shops, by mid-rise apartments and crime-scene hotels and diners for old white people.

Inside, almost everyone was poor and South Asian. Prin’s own parents had come from Sri Lanka in the 1960s. His father had worked downtown, eighty hours a week, and raised him far from the city, in a suburban paradise of flavoured coffee and televisions in every bedroom and streets named for fruit and kings and there were no other brown people.

Whereas at a church like St. Teresa’s, in deep Scarborough, the people went to communion in sincere moustaches and dark, dismal suits, in wedding gold and bright crimson saris that flowed into snow boots. The little girls wore braids past their waists. The boys wore quickly hemmed dress pants over Lebron James-endorsed basketball shoes. Everyone had sideburns. Everyone was singing folk hymns to Mother Mary and her baby, songs that cut to the heart.

He took his family to this church once a year, on January 1, in an aging Volvo with a trunk full of emergency supplies—road flares, iPad chargers, unread New Yorkers—and also the gingham grocery store bag he was now carrying into the zoo as his family debated pandas and polar bears behind him, his wife asking him to slow down so everyone could have a snack.

The bag was packed with bananas and avocados and also a St. Sebastian’s cranberry-spelt loaf Molly had baked that morning. At the bottom of the bag was a champagne-foiled sparkling-juice bottle, which, in keeping with family tradition, they’d brought to toast the lemurs on New Year’s Day.

Which was, this year, also the day to tell them.

His father was divorced, had sold his convenience store in the inner city to a condo developer, subscribed to a premium alternative-news package, and had a lot of time to think and forward emails.

Prin and Molly had decided to stop calling it just a potty problem. He was going in for surgery later that January. The plan was to take the girls to one of the more obscure exhibits and explain it there and leave it there, in a place they would never visit again.

Girls, something awful is growing inside your daddy. It’s called cancer, and it looks like this:

Mole rats: blind, pink, splotchy, writhing, they lived in a stacked complex of glass tubes. Their lives were spent crawling and squeezing over each other, their dull, plump shapes pulsing and proliferating in low light. Who wouldn’t want a very careful doctor with a super-powerful robot assistant to cut all of these gross and pointless bodies out of their beloved zoo, their beloved daddy?

Who wouldn’t want a very careful doctor with a super-powerful robot assistant to cut all of these gross and pointless bodies out of their beloved zoo, their beloved daddy?

They would ask: When they cut it out, would he bleed like when he was shaving and yelling that they were late for church? What does prostate cancer look like? Does it bite?

The forums he’d visited recommended finding something like mole rats when it was time to tell the kids. An Evangelical from Naperville, Illinois posted that he drove his kids to the parking lot of a mosque in South Side Chicago to tell them. An hour later, he posted that Islam is a religion of peace. While the others debated, Prin image-searched zoo animals until he found the blind mole rats of Toronto.

But they never made it. Shortly after entering the zoo, wet snow began to wallop them. The children decided to take a break from all the walking just as they reached the first concession stand.

“Oh please Daddy, can we have some chocolates?” asked Chiara.

“You just had some,” said Prin.

“That was all the way back in the car ride! Also, these are …
traditional Santa Claus boots full of Belgian-chocolate reindeer droppings,” said Maisie.

Despite the snow smacking them around, everyone stopped to congratulate Maisie on her reading. Maisie now looked meaningfully at her older sisters, who immediately proposed chocolates so that the entire family could celebrate her dramatic advances in literacy.

“Chiara, why don’t you tell us the answer,” said Molly.

Defeated, the children were easier to push ahead. The family paid a fast visit to the African rhinoceros standing all by herself in a snow-covered concrete savannah in far-eastern Toronto; she was wondering what the hell her parents were thinking when they decided to move to Canada.

They made for the nearest indoor space. The butterfly hall was so humid that the snow-doused children began melting and sweating and crying for help to tear off their soaking balaclavas even before they passed through the thick plastic strips that kept the butterflies in their optimal subtropical climate. Prin headed back outside and looked up through the pelting swirls. The midday sky was now pewter and thunder shook out from behind the bare trees.

Was God using a winter weather event to tell him this was the perfect day to tell the girls, or was He telling him to go home and keep them safe from bad roads and bad news? The sky also went dark and thunder sounded while Christ hung on the cross. But other than his mother, who would take him seriously for making that connection? He was no Christ. He was a forty-year-old associate professor of English with early-stage prostate cancer.

“Whatever you think is best, dear,” Molly said.

But she always said that. Did she always mean it? After twelve years of marriage and now with this diagnosis and this snowed-out plan to tell the children, it felt to Prin too late, or too early, to find out.

“LEMURS! DADDY! WE CAN’T GO HOME YET! WE NEED TO TOAST THE LEMURS!”

From Original Prin. Used with the permission of the publisher, Biblioasis. Copyright © 2019 by Randy Boyagoda.

John Douglas on His Life's Work: Talking with Killers 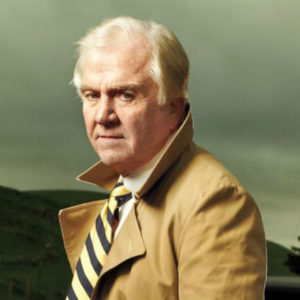 John Douglas on His Life's Work: Talking with Killers John Douglas is the OG of criminal profilers. As the lead profiler at the FBI, and now as a consultant, he has helped apprehend...
© LitHub
Back to top