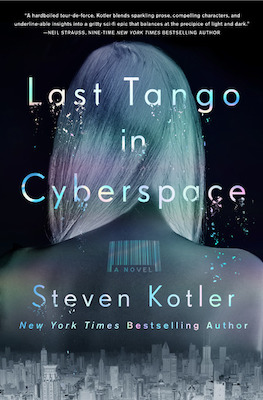 The following is an exclusive excerpt from Last Tango in Cyberspace, the latest pulse-pounding Sci-Fi thriller by Steven Kotler, which finds Lion Zorn, an “empathy tracker” and a new kind of hero, in the near future, investigating a grisly murder in a milieu of eco-assassins and soul hackers.

“Down by the Seaside” in cheerful synth tones pulls him into consciousness at 5:00 a.m. The signal has been long encoded, so he’s feet on the floor by the second stanza. Sow an action and you reap a habit, sow a habit and you reap a character, sow a character and you reap a destiny. Psychologist William James paraphrasing philosopher Aristotle, and the first thing he thinks about this morning.

Then his habits: out of bed, cross to phone, silence alarm. Box of coffee pods on a tall gray table and auto-choosing Indigo Smooth. The chrome lever opens the drop bay and, without having to think about it, he slots the pod, locks the arm, and hears a satisfying click. The machine hums to life. Two buttons start glowing, the luminescent choice of small cup versus large cup.

But it’s not actually a choice. The machine makes midget espresso or double midget. He chooses the lie that is large cup and robo-slides a mug under the nozzle. Every step done by rote, like playing scales, and the reason, he figures, James cared so much about habit.

While the coffee brews, he jumps in the shower. Clean lines, brass fixtures, and enough space that he can yoga out his back under hot water. Tea rose shampoo and hands in prayer pose, twisting over bent knees. And rinse.

A quick towel, a run of the razor, and he’s stepping into his straight-world uniform: black jeans, gray sweater. Arctic sprang for a room with a terrace, so even though it’s still chilly, he carries his coffee, a pocket Moleskine, Sir Richard’s envelope, and the dragon box out a sliding door and into the elements.

He crosses to a thin glass table beside a low brick wall, slides out a chair and feels the sure grip of the Modo outdoor model adjust to his frame. Then he faces the dragon box and an actual decision. This time he rolls 75-25, mostly tobacco, just enough Trainwreck that he can ride the double shot of THC and caffeine, not enough to muddy him for later.

He sips his coffee, lights the joint, and savors the view. The double-shot hit of the first hit hits. His pattern recognition system springs to life and the view reminds him of something, then something else.

He sips his coffee, lights the joint, and savors the view. The double-shot hit of the first hit hits.

Picking up the envelope, he unwinds the string, but the envelope stays sealed. Then he sees it, hidden under the flap, a small square of shiny black plastic. Flexible e-screen that must react to oxygen. With the flap now open, it wakes and pulses. Canary-yellow fingerprint outline glows, fades to black, then canary outline. The creators must have Apple lineage—Lion can feel the intuition built in.

He puts his finger on the e-screen and a nano-scanner kicks to life.

A zip of light, a tiny click, the envelope opens.

Exactly as expected, that Apple lineage at work.

Out slides a small stack of newspaper article reprints and a handful of photos. The articles are regular stock, but the photos feel thick.

Mesh electronics woven into the paper perhaps. The photos are also marked. Arctic’s iceberg icon floats on the bottom right corner. Red Ice is their term, but it pulses hot pink, so Lion thinks Slushy dregs.

He glances through the stack quickly. All crime scene photos, by the looks of them. He’ll look later. The clippings are the better place to start. His em-tracking machinery is driven by words more than images, but that’s only his make and model. Empathy is related to intuition, and intuition is individually customized, tuned to dominant talents. Chefs need tastes, painters images. His experience is biblical: It starts with logos.

The clippings are in English, or maybe a translation AI made a pass. One from a newspaper in Dubai, one from Cape Town, a third from something New York local, The Upstate Register.

He starts in Dubai, six months back. A Lebanese zookeeper at a private sanctuary released all the animals in his care, climbed into a cage with a pair of baboons, and went to sleep. Before dawn, it was lions, tigers, and bears on the highway. The army was called in. A pixelated photo shows an Oboronprom Ka-52 Alligator helicopter airlifting a giraffe to safety, like Noah with coaxial rotors.

Empathy is related to intuition, and intuition is individually customized, tuned to dominant talents. Chefs need tastes, painters images. His experience is biblical: It starts with logos.

He’s seen this image before. Picks up the photo stack he’d set aside and counts four shots down. There it is: same Ka-52, same giraffe. He plays a hunch and touches the Red Ice icon. The photo whirs to life, going close-up on the helicopter, the pilot in mirror shades and serious concentration. Finger tap to freeze, another to unlock. Sliding right on the giraffe provides a different focus: long neck in tight zoom.

The next image is an overhead of an octagon-shaped viewing area. A raised central platform surrounded by eight glass walls fronting eight large cages, all big and empty. The next shot details the inside of the octagon. Different vantage point, but the same glass cages. At the center of the photo, a canary–yellow arrow appears, pointing to a dark wooden table surrounded by six cheap plastic chairs that sit in the middle of the central platform.

Lion taps a finger on the table. The arrow disappears and the photo zooms. Close-up of wood grain in high relief, and atop the grain: five lines of silver powder and a silver straw. Three faint lines, already inhaled, two left intact, each the same hue as a classic Airstream.

A click in his brain as data bit finds data bit. Neurotransmitters dump into synapses, end result, more questions: Is this a Rilkean thing? A drug thing? An animal rights thing? Whatever thing it is, Arctic sure managed to dig up his backstory. Lion definitely understands why they want him for this job.

The South Africa article is about a family on safari: kids, grandkids, parents, grandparents, aunts, uncles, a clan of nearly eighteen. Without explanation, they departed camp in the middle of the night and were found the next morning, sleeping amid a pride of lions. Everyone makes it back to camp safely; no one can remember why they left. Corresponding photo shows the safari camp, a picnic table painted fire-engine red in the center. Another yellow arrow, pointing at the picnic table. Tap for close-up. Same silver straw, same silver powder residue.

The final article is a detective story, told twenty-first-century style. Airplane records show Robert Walker, fifty-four, departing Dallas, landing at LaGuardia. A kid taking a selfie catches Walker in snakeskin boots and desert fatigues stepping off the plane in New York. A camera over baggage claim has him lifting a camo-colored duffel and black gun case into a luggage cart. Uber gets him curbside to his Hamptons residence. His alarm system confirms entry. Drone footage from who knows where reconfirms. Four minutes later, Alexa has him asking about a silver residue on a table in his study. Two days after, an anonymous 911 from an untraceable burner brings in the cops. They report the house empty, so the press reports Robert Walker MIA.

Something not quite right is the only thing Lion gets from the story. He takes another hit from the joint and tries again. Still can’t put his finger on it.

And no follow-up article.

But he finds two corresponding photos in the stack. The first shows a tartan graveyard that must be Walker’s study. Plaid wallpaper and mounted animal heads covering every inch. Lion sees a Lucite end table beneath a giant elk, an unzipped gun bag sitting beneath the table and a .300 Winchester Magnum visible through its acrylic surface. A familiar sheen on the tabletop.

He taps and zooms, bringing the tabletop into close-up. Now he sees what he already expects to see: silver straw, silver powder lines.

The second photo takes him a second. It’s another shot of Walker’s study, the lens pointed straight at the animal heads. Deer, antelope, gazelle, zebra, tiger, and then human, male, roughly midfifties. The missing Robert Walker? His head neatly mounted to oval–shaped mahogany, hanging on the wall like just another trophy.

Lion double-taps the image for the zoom, maybe hitting the mesh electronics a little too hard, maybe not yet believing what’s he’s seeing. Close-up reveals a wide, pale forehead, a tight web of crow’s-feet jutting off hazel eyes, and a receding prep school haircut from another decade. Walker’s jaw seems clenched, his neck muscles bulging, and nothing below his neck but high-gloss dark wood.

But he’s not gonna think about it right now. His attention is fixed on the dark ovals of Walker’s eyes. Something in those eyes, Lion will think later, something else he should have seen coming.

From LAST TANGO IN CYBERSPACE. Used with the permission of the publisher, St. Martin’s. Copyright © 2019 by Steven Kolter. 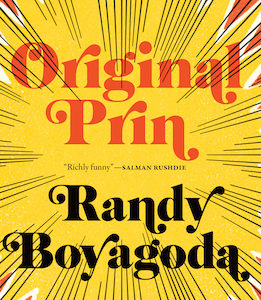 Original Prin Eight months before he became a suicide bomber, Prin went to the zoo with his family. Puffy and brightly balaclava’d, the six of them...
© LitHub
Back to top