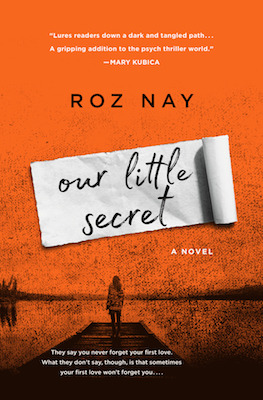 The following is an exclusive excerpt from Our Little Secret, by Roz Nay. In the following passage, we are introduced to the mysterious woman at the heart of this suspenseful new thriller.

Inside the beer tent, it was even louder and the walls shone slick with heat. We spied HP and Ezra by the bar and started to push our way through the bodies toward them. I slipped under the elbow of a man in a white dinner jacket and popped up into the middle of the boys’ conversation. HP was roaring with laughter and a girl in a sky blue, skintight dress was touching her hand onto his forearm as if to say, Stop it immediately, I can’t take any more of your fun.

“I’m serious,” Ez was yelling. “We got home with no shirts and a black eye each and his mom took photos of us.”

The girl shook her head, the locks of her blond hair tickling at her bare shoulders. She was slim, wore very little makeup, and had freckles across her nose and a strange, dark tan on the bottom half of her face that made it look like she’d dipped her chin in cocoa.

“You guys are awesome.” I could hear she was Australian.

“Hey.” I inched myself into the outer curve of the circle. “Did you get me a drink?”

Ezra and HP looked sideways at each other.

I stepped with Ezra to the bar, looking back over my shoulder distractedly to see HP hunker down and listen to something else the girl was saying. When he replied he covered his mouth with his hand to make sure he didn’t spit on her. He only did that when he was making an effort.

“LJ!” Ezra poked me in the back with a stubby finger. “What are you drinking?”

“Champagne. And one for Freddy. Who’s the girl?”

“She’s an Aussie, just back from the Alps; some kind of snowboard instructor.”

When he handed me two glasses of champagne, he shoved them and they spilled a little. He wiped his fingers down his lapels and hurried back into the circle. Freddy stood behind me and reached over to take his glass.

“Bloody Australians,” he said into my ear. “Who wears flip-flops to a ball?”

I glanced at the girl’s feet and headed back into their circle.

“Why’s your face half brown?” I asked. HP, Ezra, and the girl turned to me.

“What’s with the tattoo?” I nodded at her left forearm, the inside of which was inked with an elephant, decorative and colored.

“Elephants are heaps beautiful. They keep soul mates for life and mourn their loved ones.” Her teeth blazed whiteness. She looked like she ate nothing but apples. “And I like their knees.”

“Little John, we’re going out to do the bungee run. You in?” HP drained his pint glass.

“Little John? Cool name! Like the Merry Men!” The true blue of the girl’s eyes shone. “So which one of you is Robin Hood?”

HP and Ezra both pointed to their own chests.

She held out a smooth, toned arm. “I’m Saskia.”

When I shook her hand her fingers felt icy against mine.

At the mention of Saskia, Detective Novak sits up straight in his chair.

“Look at you,” I say. “It’s the arrival of Saskia into my story. You must be excited.”

He knocks his pen against the clipboard on his knee. “I was interested to know how your paths first crossed. And more interested in hearing how they led you here.”

He tilts his head. “You must have hated her tattoo. Elephants have soul mates? I thought you had the monopoly on those.”

“Between you and me, Novak, I wouldn’t take anything Saskia tells you to be well researched.”

He laughs once, but I know what he’s doing. He’s pretending to be on my side.

“Okay, so here’s Saskia, moving in on your guy. If this was a love story, we would have reached the problem stage.”

“That’s funny.” I don’t smile. “In any story, Saskia is the problem stage.”

From Our Little Secret. Used with the permission of the publisher, St Martin’s. Copyright © 2018 by Roz Nay.

The Civil Rights Photographer
Who Was an FBI Informant 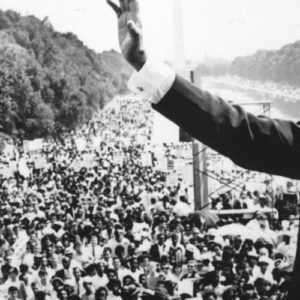 The Civil Rights Photographer
Who Was an FBI Informant Dr. Martin Luther King, Jr. stretched onto the bed, curling ever so slightly to his side. He looked crisp yet casual in his suit...
© LitHub
Back to top