"Medicine is a powerful narrative tool because it is in itself mysterious."

Crime fiction, from straight whodunnits to elaborate psychological thrillers, is steeped in immediate drama. Someone has been wronged—murdered, raped, kidnapped, assaulted, harassed, robbed, etc.—and the reader wants justice. One of the tools available to the novelist to deepen that essential conflict and to add further tension is through the use of medicine, both by its practitioner and patients. Medicine is a powerful narrative tool because it is in itself mysterious. To a victim, disease and injury can both handicap and mystify. And a physician possesses what seems to be an impenetrable font of knowledge in that regard and thus gains power from our trust. By playing with these aspects of medicine in characterization, motive, plot obstacle, and sources of tension unique to a particular genre, a writer can capitalize on this fertile ground.

In the development of a physician character, several permutations present themselves. Obviously, the trope of the good physician exists because physicians take the Hippocratic Oath: First do no harm. On the simplest level, a writer can fashion a physician character as a straightforward truth-teller who presents medical facts to establish the particulars of a crime. (I am using physician as short-hand here for any respected medical provider from nurse to midwife to pharmacist.) These facts, of course, must be well researched to avoid alienating any knowledgeable medical readers. But this is a flat character, who nonetheless serves a functional purpose.

On a heightened, more complex story level, the truth-telling physician can be ennobled to contradict evidence in a manner that turns a trial or case on its head. This is physician as luminary, a source of good who triumphs over evil by saying what no one else will say or can say. Or, to further deepen characterization—physicians are human, after all, subject to exhaustion, distraction, and fallibility—truth-telling can be complicated: a clever lawyer can outwit a physician in a way that makes the truth itself much more complex. For instance, a prosecutor could force a physician witness to reveal a complicating medical reality that undermines her own previous testimony. This approach more accurately mirrors medical reality than any black-and-white portrayal of the science, and adds tension to the narrative.

Other opportunities abound to deepen characterization and suspense by grounding motivation in medical diagnosis. The consequences of physical disease or mental health impairments provide ample possibilities.  From a structural standpoint, the ticking stopwatch of a fatal disease is an excellent narrative frame. The issue of mortality functions as dramatic imperative, an inviolable period of time in which a character must act. Borrowing from the small screen, one well-known example of a physical diagnosis providing motivation is Walter White in Breaking Bad. An impoverished chemistry teacher, White responds to a fatal cancer diagnosis by cooking meth in order to secure his family’s economic well-being after he dies. This outré reaction drives him down a path that quickly spins out of control.

Alternatively, one can reverse-build a character out of symptoms he does not understand which cause him great trouble. For instance, the impingement of a tumor on brain tissue can give rise to bizarre, incomprehensible behaviors that can set in motion cause and effect that ripples into disaster. Or the incapacities and indignities of mental health disabilities can be utilized to reap both physical and emotional havoc. This was executed most masterfully in fiction in Caleb Carr’s The Alienist. (I kept this extraordinary novel at my side as a talisman when I was writing my most recent book, Winter Sisters.) In The Alienist, Carr brilliantly fashions a psychotic killer whose motivations are deeply rooted in an abusive past. This is spell-binding enough, but the slow revelation of the killer’s actions, combined with an even greater complication of the alienist’s own psychological traumas, exemplify the lofty ways in which medicine can be employed as complex characterization that drives a novel forward. In other words, motivation and tension at its narrative best.

As plot obstacle, the life disruption of disease teems with potential. Will the elusive medical fact be discovered in time to solve the case, save the day, cure the patient? There can be many elaborations on this simple hurdle: puzzling clues left by a murderer that require medical knowledge to decipher; poison that is difficult to detect, as in the real-life poisoning  of the Russian spy in London that rendered him mysteriously ill before his death; the presence of unreported, poorly-healed injuries on X-Ray that expose a supposedly grieving husband as a domestic abuser, and thus a suspect; or lastly, illness or injury, not in a victim, but in a detective, which impairs his ability to solve a case. These myriad scenarios provide necessary delay and imperil story resolution, which magnifies narrative tension.

As plot obstacle, the life disruption of disease teems with potential. Will the elusive medical fact be discovered in time to solve the case, save the day, cure the patient? And, in historical fiction, my genre, there exists a unique tension from the knowledge gap between historical and contemporary medicine. This disconnect serves as a source of tension outside the control of the characters, because they suffer from what I like to refer to as ignorant ignorance. Characters do not know what they cannot know, because they are ignorant of medical breakthroughs to come. During the time period of my first novel, My Name is Mary Sutter, a tale of medicine and nursing in the Civil War, germ theory was not yet known and sterilization was still a decade away. Since I write characters who stay true to the medical practices of their time, my characters Dr. William Stipp and nurse Mary Sutter reuse surgery knives and sponges again and again without cleaning them. The result was widespread infection, ensuing amputations, and death. The physicians and nurses who were setting out to do no harm were in fact doing a great deal of harm. Their misapprehension presents a wrenching predicament for readers, who discern the impending devastation even as the characters do not. These details can be smaller, too. In my novel I Always Loved You, a story about the impressionists set in the 19th century, the artist Mary Cassatt’s sister Lydia is afflicted with what we now know was Bright’s Disease, an impairment of the kidneys. Because she was anemic, her physician prescribed the daily drinking of raw animal blood at a slaughterhouse, which was correctly regarded then as a medically acceptable way to effectively raise the iron levels in the blood. The modern reader, though, reads in horror. In the real-life application of historical medical standards, abundant territory exists for taut dramatization.

The tools of any novelist—playing with characterization, manipulation of motive, the juggling of plot obstacles, and sources of tension unique to a particular genre—apply in crime fiction, too. But often, medicine as disruption is less utilized than it could be. Its expert application can add greater dimension and heighten tension in any narrative, especially the crime narrative.

Robin Oliveira is the New York Times bestselling author of My Name Is Mary Sutter and I Always Loved You. She holds a BA in Russian and studied at the Pushkin Language Institute in Moscow. She received an MFA in writing from Vermont College of Fine Arts and is also a registered nurse, specializing in critical care. She lives in Seattle, Washington. 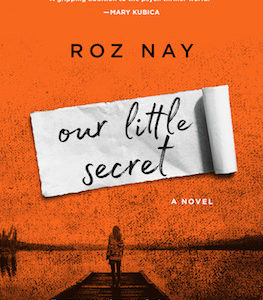 Inside the beer tent, it was even louder and the walls shone slick with heat. We spied HP and Ezra by the bar and started...
© LitHub
Back to top