Crime, outdoors. Given my passion for the outdoors and my taste for reading about violence, I’ve always been drawn to books where bad things happen in the woods. And by “woods” I mean mountains, or prairies, swamps, deserts—rural and wild places portrayed by writers who know something, who’ve spent time out there, writers for whom the place matters. It started when I was young and impressionable, a kid at my family’s summer camp where the counselors read us works like Huckleberry Finn, “A Good Man is Hard to Find,” and Tarzan of the Apes. They knew not what they did, but a writer’s life ensued. Decades later, my novel Bearskin explores themes found in those stories from camp as well as the nine influential (to me, at least) books listed below. 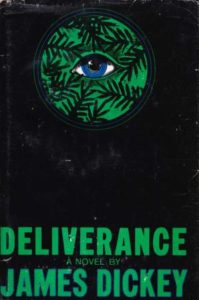 I loved this book when I read it in high school, and I always thought it was the kind of thing I’d like to write. More people have seen the movie than have read the book, and in popular culture, Deliverance means “Dueling Banjos” and squeal-like-a-pig. As to the former, Dickey played guitar himself, though reportedly not that well, and the scene in the book is a beautifully described duet of “Wildwood Flower” by Drew on guitar and the mountain child on banjo. When I was in high school, “Wildwood Flower” was the second song I learned on the guitar. The first: “Dueling Banjos.” And the infamous rape scene, really, forget poor Ned Beatty and read that passage: it’s understated, perfectly-executed, and utterly chilling. 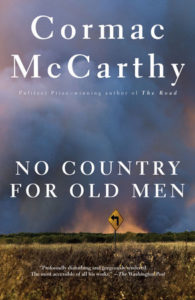 No Country for Old Men, by Cormac McCarthy

Another fine crime-in-the-wild book that gave us a popular movie. Over the years I’ve read McCarthy’s early works repeatedly, and if pressed to pick a single favorite writer he’s the one I’d probably pick, in part for his uncanny ability to render violence in the wilderness as simultaneously hyper-real and surreal. I could have used almost any of his novels for this list, but No Country was a direct and timely inspiration for me. I first read it while I was rewriting Bearskin and it amazed me what McCarthy was able to do with a relatively conventional thriller set-up. 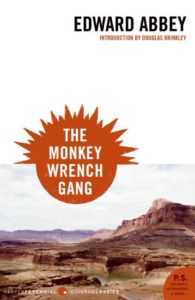 I discovered Abbey when I was in my early twenties, and I was shocked to find someone who thought about the same crazy shit I did, wrote about it, and got away with it. Monkey Wrench gave us the original crew of madcap eco-criminals making havoc in the desert Southwest. Definitely worth re-reading this still-relevant classic. Some might say we need us some metaphorical Hayduke now more than ever. 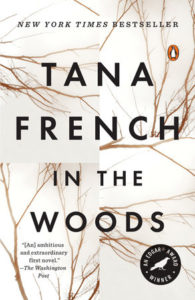 In the Woods, by Tana French

The first in the Dublin Murder Squad mystery series, an artful blend of procedural and psychological thriller. Most of the action occurs outside the titular woods—it’s more suburb, city, police station—but one thing I enjoyed about the book, besides the high quality writing and inventive plot, is the way a patch of ancient forest weighs in the damaged psyche of the main character. The violent tragedy that made Detective Rob Ryan who he is happened in that forest when he was a child, but he can’t quite remember it. French takes risks here that I admire, especially in leaving the event mysterious—I’m sure that’s why I still can’t shake the menace of what happened to Ryan as a kid. It feels like my own partially-remembered nightmare. 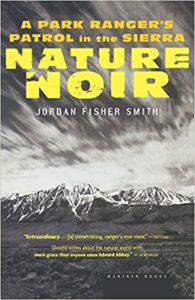 Nature Noir, true to its great title, reads like the best straight-up crime fiction, but it’s actually a memoir of Jordan’s time as a law enforcement officer in the “accidental wilderness” of California’s American River canyons. Slated to be drowned underneath the planned Auburn Reservoir, the canyons attracted misfits and miscreants like a magnet collects iron filings, and Jordan and his fellow rangers were called upon to manage a Mad Max atmosphere in which everyone seemed to be armed, drunk, or both. Author Jordan came away with a profound understanding of the social, environmental, and poetic implications of what he’d seen, which he reports in a gripping, intelligent book. 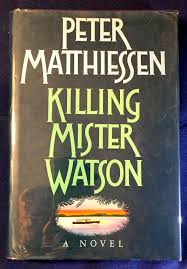 Murder at the wild frontier of southwest Florida near the turn of the twentieth century. Watson is a gorgeously-written, multi-voiced portrait of a most compelling anti-hero, and there’s much to learn there. Once I made it past the unforgettable opening description of post-hurricane Chokoloskee—I just kept re-reading it in wonder—I was swept up in the story of the complicated charismatic capitalist outlaw E. J. Watson and his ruthless quest for power. 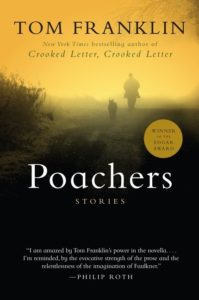 A mutual friend sent me Tom’s book of stories-and-a-novella way back when it first came out, and his combination of fine writing and irresistible authenticity has inspired me ever since. In the title novella: Rural south Alabama, three feral Gates brothers, and Frank David, the mysterious, implacable game warden who brings them low. 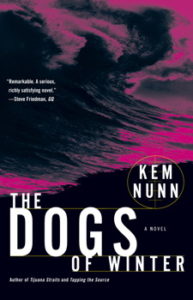 The Dogs of Winter, by Kem Nunn

I loved this beautifully-written journey into a world I knew nothing about: big-wave surfing and the wild coast of northern California. A surf photographer and a surfer, both men a bit past their prime, go hunting for the giant waves of Heart Attacks, a remote, legendary surf break that may or may not be real. After they’re blamed for the death of a local guide, the surfers are hunted themselves. Disaster naturally follows. Nunn’s descriptions of the setting, the waves, and the surfing in Dogs are justly famed. 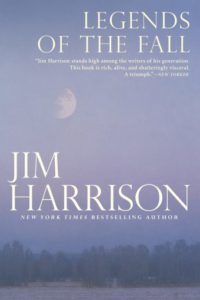 Legends of the Fall, by Jim Harrison

A Montana ranching family and their epic tragedies, defeats, and triumphs in the wild American west (and elsewhere). Legends is an acknowledged tour de force, and yet another popular movie that should drive more people to read the better novella. I first read it around the time I quit the so-called “real world” of big-firm law practice and threw in with the struggling writer population, and Legends, along with Harrison’s Dalva, served as stubbornly remote but constant beacons: to try to do this; that’s why you’re changing your life.

James A. McLaughlin is the author of Bearskin. He holds law and MFA degrees from the University of Virginia. His fiction and essays have appeared in The Missouri Review, The Portland Review, River Teeth, and elsewhere. He grew up in rural Virginia and lives in the Wasatch Range east of Salt Lake City, Utah. 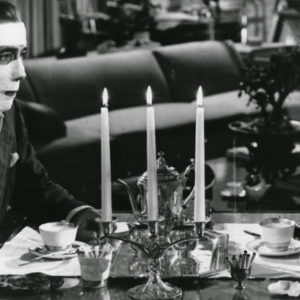 Is there anything more annoying than having your front door smashed in by men with guns while you, luckily, had slipped out to the corner...
© LitHub
Back to top