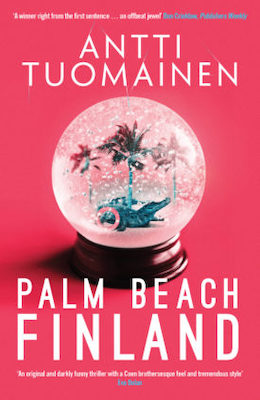 The following is an exclusive excerpt from Palm Beach, Finland, the latest Hiaasen-esque thriller by Finland’s Antti Tuomainen, which finds Jan Nyman, detective for the National Central Police, investigating a murder in a seaside town known for its kitschy holiday village, a place with the tagline, “the hottest beach in Finland.”

And there it was. Her kitchen, which was beginning to look almost the way it used to.

For three whole days her kitchen had been like a movie set: broken glass everywhere, things strewn all around, her things, every surface red from the fingerprint powder, and on every surface imaginable, both vertical and horizontal, police marking tape and the dried blood of the unknown victim. Naturally she’d asked the police who this man was, or rather who he once was, but to her surprise the officers, especially the last two to visit, had asked her the very same question. Needless to say she’d been unable to answer, and so they all appeared to be in a situation in which nobody knew anything about anything.

But somebody must know. All Olivia knew was that it wasn’t her. Scouring the floor had been an operation in its own right, that and making sure she’d picked up every piece of broken glass from between the floorboards, from the table tops, the chairs, the counters. There were even pieces of glass in the bread bin. The peppermill was covered in blood.

After the initial shock – when she had returned from town to discover the man, run out into the yard and made that garbled call to the emergency services – she had taken the events in her stride with a calm that surprised her: after all, she was living in a house in which a man might have been murdered. Perhaps it was the shock of her father’s recent death from which Olivia was still suffering, a relative had suggested.

When the news of her father’s death had arrived, she’d cried for a week and regretted not having spoken to him more often, or not having spoken about the things they should have spoken about, without having an idea of what those things might be. Then the feeling passed and she realised she had spoken to him quite enough and that her father wished her all the best, just as he had done when he was alive. That was it.

And that’s what this was all about. Right here in this kitchen, this house.

Which reminded her of money, yet again, of the way things had always gone – always! – and always for exactly the same reason. She had been engaged twice and married once. Both relationships had lasted almost exactly eight and a half years. On both occasions she had been the one who eventually said, Enough is enough, Kristian / Marko.

Kristian: a photographer who had once owned a camera – but didn’t any longer. Olivia was young, very young. Kristian had temporary complications when it came to money and inspiration. At that point his complications had already lasted twenty-nine years. Olivia had listened, stroked his head, consoled him, and carried on studying, though she eventually dropped out of college because one of them had to work and pay the rent for their home and the office space they rented in the same building and for which Kristian still hadn’t fetched his own set of keys, until one day Olivia came home from work, sat down on the sofa she had paid for and said to her boyfriend as he sat through a zombie-film marathon (Kristian’s idea of hard work) ‘This isn’t working…’

Marko: owner of an office hotel situated in a place nobody could ever find and where nobody wanted to work. Marko spent all night sitting in the director’s office looking out at the lights of the nearby industrial area, drinking room-temperature salmiakki liquor and waiting for the phone to ring. Perhaps he was still sitting there, still waiting for the phone call that never came. Olivia had dropped the keys next to the bottle of liquor on Marko’s desk. Marko was tapping the computer’s mouse with his forefinger and running the cursor over the empty reservation diary when Olivia said ‘This isn’t working…’ and walked out of the door. Soon afterwards she started sharing a one-bedroom flat in Kallio with her former classmate Minna, and there she had lived until she moved back here, to this house.

Conclusion: men are an expensive hobby. They can be charming, funny, rude, stupid, bright as a shining star, dull as the handle of a hammer, handsome, not so handsome but still perfectly okay, trustworthy or untrustworthy, and everything in between, but whatever you do, whoever you meet: keep hold of your wallet.

Maybe today I won’t feel like a cut of meat on display, like a nudist at the South Pole.

And so here she was: thirty-nine years old, witty if necessary, with long dark hair beneath which was a brain that at its best was quick and practical, though it didn’t have such a great track record when it came to men. She’d been told on more than one occasion that she was broad shouldered, strong-legged, slender, long-nosed, magnificent, with a slightly exotic suntan, a handsome woman, and that her eyes weren’t just brown but nut-brown. In the course of her life she’d made her fair share of mistakes, and for those she took full responsibility. She didn’t hate anyone or anything and she wasn’t embittered; she was penniless and marginally desperate. But there was one possession she planned to hold on to, because in that possession she saw a turning point, a new opportunity: she would not give up this house; she would renovate it, turn it into a home for herself, no matter how many dead men turned up in the kitchen.

Perhaps this was the secret to her sense of calm.

Olivia Koski leaned against the sturdy wooden doorframe a moment longer. Between the kitchen and the hall was a short corridor of sorts, so short in fact that it was more like an elongated doorway. From the wall nearest the yard jutted an empty hook. Olivia looked at the hook again, and in particular at the darkened area on the wall beneath it. As she’d cleaned up the apartment she’d found everything else, but not the artefact that had been hanging on that hook and that had belonged to her father and his father before him. She didn’t understand why anyone would steal it. Assuming it had been stolen.

The brightness of the day lit up the house, cleaned the kitchen, lightened her mind. There’s no reason to panic, she tried to convince herself.

Every now and then the house creaked, gave a dull thud, and she took fright. It was all to do with the dead man in her kitchen, of course. For a few chilling seconds she imagined there was somebody in the house, then she relaxed again. This was a safe place, that much she’d learned. Safe, but certainly not without its problems.

The drainage pipe, which her father – a dreamer and unofficial record holder for the world’s most impractical human being – had never afforded a single thought, would last. It wouldn’t give up on her. Not before she could get her hands on ten thousand euros. A moment ago she’d imagined she was only missing just over nine thousand, but that was premature, wishful thinking. After paying her bills she would need to find ten grand exactly.

She looked at the clock on the wall and gave a start.

Her shift started in fourteen minutes. She’d accepted the first job she’d found, the only job on offer. It was badly paid, the working conditions were always changing, and her colleagues behaved strangely, especially these last few weeks. But the worst of it was the uniform. At first it had seemed just awkward, and the feeling hadn’t gone away, though Olivia had hoped it might.

Maybe, she thought once more, maybe today will feel different.

Maybe today I won’t feel like a cut of meat on display, like a nudist at the South Pole.

She walked into the hall, took her uniform from the clothes rail and held it in her hand. No, the feeling was still there. Olivia undressed and stood in the middle of the hallway, as naked as the day she was born, for that’s what her uniform felt like. She took a deep breath, picked up the outfit, pulled it on and flicked the rubber straps over her buttocks hoping it wouldn’t feel the same as yesterday.

She looked at herself in the mirror. Even if she were to close her eyes, she thought, she would still see that bright-yellow text. It was worth a try. A quick blink, a moment of darkness – and true enough, for a brief moment she didn’t see the text.

But at the same time, for a few chilling seconds, she saw the figure of a man walking towards her, as clearly as if it was happening in broad daylight, somewhere out in the open, on the shore perhaps. The man raised his hand as if in distress.

Olivia opened her eyes, out of bewilderment more than anything. The man disappeared, as did the cold.

The text on the front of her bathing costume seemed to suggest more than just the resort’s new name. Olivia stood in front of the mirror a moment longer.

It felt better to keep her eyes open. 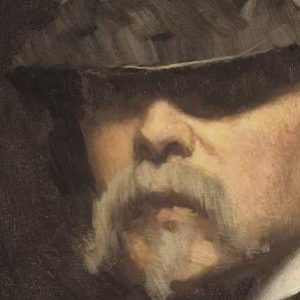 CrimeReads Brief: Week of April 6, 2019 Angie Kim talks with Laura Lippman, Alison Gaylin, and Alafair Burke about the state of women in crime fiction. | The...
© LitHub
Back to top