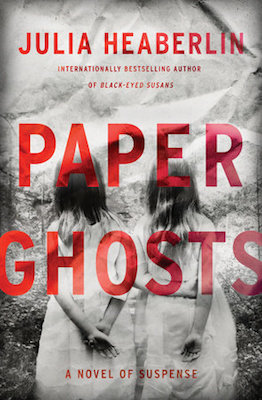 The following is an exclusive excerpt from Paper Ghosts, by Julia Heaberlin, a crime story turned road trip when a woman kidnaps a suspected serial killer with dementia and takes him across Texas trying to find where the bodies are buried. Heaberlin uses photography and landscape for a visually striking narrative that checks all our psychological thriller boxes.

When she was twelve, my sister fell into a grave.

We were two children by ourselves in an empty cemetery, old stones jutting out of the ground in all directions. The grass was dead, the same straw color as my sister’s hair. I remember the terrific flutter in my chest. How her fingertips barely brushed mine when I reached my little hand down to try to pull her out. It was freshly dug earth, waiting.

She was laughing down in that hole.

My sister loved to roam that cemetery in Weatherford, Texas. Peter Pan was buried there, although the stone said Mary Martin Halliday. So was someone named Jimmie Elizabeth and someone else named Sophronia, which is also the name of a moth in England and a purple lily and a character in Charles Dickens. My sister told me that. She was going to name her first daughter Sophronia and call her either Sophri or Phronia for short.

There were hundreds of graves. A million bones under our bodies as we cartwheeled across plots.

Death came to her like a summer’s dream. That was etched in script on one of the ancient white markers. I don’t remember the rest of the epitaph, although my sister read it to me every time.

I ran a half-mile back to our grandmother’s house for help.

My sister climbed out of that grave by herself without a scratch on her.

I look back and think that’s the day, the moment, she was cursed. When she was nineteen, she disappeared, like a lasso dropped from the clouds and snatched her up.

I know it was the day I became afraid of things.

I slide my queen one space closer to his king. “You know who I am.”

He swipes his right arm, the one that still fully cooperates, across the board. A single, swift movement. Pieces fly, bounce off the carpet, rattle into corners fuzzed with dust from a past decade. I don’t flinch, something I’m practiced at. Neither does the only other occupant of the room, a deaf woman knitting an infinite patch of blue. Or green or gold or pink. It could be any color.

She doesn’t have needles. Her hands work the air methodically while her invisible work piles up like an accordion. A wedding veil sits crookedly on the silvery threads struggling out of her scalp. The second hand on a plastic clock above her head jerks.

I’ve wanted to rip that clock off the wall on every visit. Time for the people in this house is meaningless. No need to travel beyond the triple-locked front door or wonder who or what made the three long white scratches that run down its wood veneer. No good reason to think about the people who never visit you or the horrible things you’ve done. So what if you can’t remember that you never liked dark bananas or the canned laughter of I Love Lucy but now you eat one while watching the other?

I wonder what Carl is thinking. Maybe about how he’d like to kill me. I’m twenty-four, in the age range. White. Slender. People say I look like my sister. The difference is, she was lit from the inside. Dramatic. Gutsy. A performer. People drifted to her. Loved her. Carl drifted to her, and snatched her life.

Maybe he thinks I am my sister come back to haunt him.

I am the understudy, Carl. A shell of her, loaded with dynamite, set on revenge. The nervous one in the wings about to jump onstage. You and I, we will be co-stars.

I am the understudy, Carl. A shell of her, loaded with dynamite, set on revenge.

I am also a perfect stranger every time I come here, or he’s lying. Each time, he claims to forget my name. He won’t answer when I ask why, in June, he is wearing a Christmas tie leering with Grinch faces, or tell me where he bought his leaden, ancient boots, or the prettiest place he remembers they last took him. Boots always remind me of vistas. Of standing firm and steady on a dangerous precipice while beauty unfolds for miles before your eyes.

He’s unimpressed by any of my random musings on boots, or the Walt Whitman and John Grisham I read him by the only sunny window in this house, or the series of jokes about talking cows that I tell while we take walks around the neighborhood. Things any loved one would do. This afternoon at IHOP, I watched him drown his pancakes in strawberry syrup and knife them into a precise patchwork of bites. I wanted to ask, Does the syrup remind you of blood?

He’s trying to make me think his eyes are glimpses into a dark solar system where he retreats, alone, but I won’t be fooled. I wonder what he sees in mine. Anything familiar?

He’s a hell of an actor, according to old court testimony.

Right now, with a harmless bit of violence, he’s reminding me that he’s still strong. Relevant. I already know. I’ve studied him carefully. Weighed the risks. Searched his room while he was in the shower and found his secret stash hidden in a battered suitcase under the bed—the red rubber exercise band that keeps up that knotty little bulge on his right forearm, and the ten-pound free weights. The sharpened pocketknife and the silver lighter with the engraved N, tucked into the zipper pocket along the back with a single cigarette.

The 8X10 photograph, pressed carefully flat, under the lining. It could be 1920, or two years ago. Carl the photographer, whose Time Travel book of surreal images once hit the bestseller list, specializes in timeless. The corners of the paper are soft, and there’s a white crease in the middle that cuts the girl in two. She’s standing on a barren rusty landscape that’s probably never sucked up a drop of rain.

A tiny silver key charm nestles in her throat. The same key that I know hangs out of sight, somewhere in the graying curl of his chest hair. I saw it once, when it slipped out of his shirt and dangled over the chessboard. Is she one of his victims, too?

Old serial killers who roam free have to land somewhere, of course. I’ve thought about this a lot. They must get tired. Decide to pamper roses or grandchildren. Break hips and suffer heart attacks. Go impotent. Run out of money. Don’t see the car coming. Put guns to their heads.

The killers who publicly beat the system, and the unseen monsters who are never caught and slip around like silent, pulsing background music. Screeching oboes and pounding drums. Only a few ever hear their soundtrack, right at the very end, and then it’s too late.

It took a long, long time to find the man I believe killed my sister. Years. Dozens of interviews. Hundreds of suspects. Thousands of documents. Reading, stalking, stealing. It’s been a singular, no-holds-barred obsession since I was twelve and my sister’s bike didn’t make it the three miles in broad daylight from our house to her summer babysitting job. It was morning.

Two sweet little boys, Oscar and Teddy Parker, were waiting for her on the other end. Hard to believe, but they are in high school now. Several months ago, their mother found my address and mailed Oscar’s college application essay with a note saying she hoped she was right to send it.

I wasn’t sure. I didn’t unfold the piece of paper right away. I had no idea what it would say—I just knew that my sister was the subject. I tucked it in the frame of my bathroom mirror. I didn’t like thinking of her life as something to be critiqued and rated by college admissions personnel.

It took me a month to work up the courage. Nothing, Oscar wrote, was ever the same. I was only five, but her disappearance changed everything. I wore the friendship bracelet we made together until the threads wore through and it fell off. No babysitter ever lived up to her. If I’m honest, no girl ever has. No assurance will make me feel safe again, yet I think of her every time I need to be brave. She’s the reason I want to major in criminal justice.

I’d always thought of how deeply my sister’s death affected my family. Me. Even my physical body never felt the same, as if every cell was chemically changed, forever tweaked to high alert.

I’d never once thought of the pain of the two little boys who begged her to read Harry Potter because she was so good at the voices. When Mrs. Parker called at 9:22 a.m. to ask why Rachel hadn’t shown up, I was getting out the flour to make chocolate chip cookies.

My parents, both accountants, had left for work fifteen minutes before. I was twelve, charged with cleaning the house and making dinner in the summer. It was a normal day in a normal house.

Is Rachel sick? Mrs. Parker had asked on the phone. She wasn’t mad, I remember, just concerned. Does she have a fever?

An accident, I thought immediately. A car ran into her bike. She’s unconscious somewhere. The canister fell out of my hands onto the floor, scattering its powder across the black tile.

No one cleaned it up for a long time. In the chaos that followed, people tracked flour all over our house, footprints that stayed for weeks. Months later, there was still the light whisper of them. It was like Rachel was there with us, walking around as a ghost.

Now that I’m finally here with Carl, making my move, I wonder for the last time if I should call it all off. I’ve told no one of my plan to steal him out of this place and find the truth.

Now that I’m finally here with Carl, making my move, I wonder for the last time if I should call it all off. I’ve told no one of my plan to steal him out of this place and find the truth.

It wouldn’t be the first promise I’ve broken to myself. The girl in his suitcase, with the tiny key to nothing, seemed to be begging me with her eyes to leave and not look back.

I don’t want to think about what Carl could still do with two good hands.

The air conditioner clunks on. A lukewarm breeze is blowing out of the vent in the ceiling. The wedding veil drifts, a cobweb caressing a wrinkled cheek.

I kneel down to pick up the chess pieces and disappear under the card table.

“Who the hell are you?” He’s shouting now, pounding the card table so it jars the top of my head. His boot shoots out, and he presses down purposefully on my hand until it hurts. I jerk my fingers back, refuse to cry out, open my fist to the lowliest piece on the board. A pawn, of course.

It’s the only logical way to get him in my custody.

Who the hell are you? 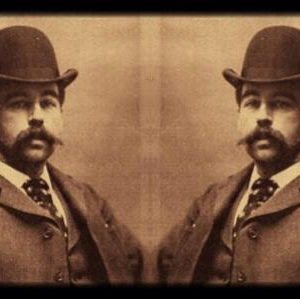 CrimeReads Brief: Week of May 10, 2018 A sunny place for shady people: 12 essential Miami crime novels, from Willeford to Hiaasen to Garcia-Aguilera...
© LitHub
Back to top