How lockdown helped one parent and author overcome fear and embrace living life to the fullest.

On March 11, 2020, I was at the gorgeous Kitchener Public Library for an event. My debut, Woman on the Edge, had just published in the United States a week earlier, after hitting #1 on the Canadian bestseller lists. After two decades of writing book after book and countless rejections, my dream of being a traditionally published author had come true in ways I could never have imagined or expected. I felt grateful, excited, and full of hope and joy.

The Coronavirus had been all over the news since January, and things were getting worse. I’d hesitated about attending an in-person event but decided if we were all “socially distant”—that new expression we were all uncomfortably accepting—we’d be okay. While in Kitchener, though, the WHO declared the Coronavirus a worldwide pandemic. I was scared, of course, for my kids, then nine and twelve, my senior parents, my husband, and myself. On the train home, I spoke to my children, who were trying to make sense of what a pandemic meant. I wanted to reassure them, but I didn’t understand it myself.

The next day, governments around the world, including in Ontario, shut everything down for two weeks—schools, malls, offices, stores. I was hopeful that if we all stayed home for fourteen days, this virus would be stopped in its tracks. Like most parents, I made this isolation period as fun and positive as possible: games, living room movie nights with mattresses tossed on the floor, long walks with the dog. I viewed it as a chance for us all to connect, a pause on the chaos of life.

Up until that point, I’d worked hard to achieve as much of a sense of balance as I could between motherhood and my career. My identity as a writer was as important to me as that of a mother, but my children always came first. I could manage that by working at home with a somewhat flexible schedule. I could volunteer on all school trips, join the parent council, be an active member of my wonderful community, go out with my amazing friends, travel when I could, and promote the novel I’d toiled, sweated, and bled to finally see on a bookstore shelf. Life was damn good. I didn’t realize then how good it truly was.

I was also working on Watch Out for Her, my second thriller, that exhilarating yet also pressure-filled time after the success of a debut. I was compelled to explore a woman grappling with her identity as a mother and an artist, struggling to figure out where her family left off and she began. I also wanted to dig into issues of control, obsession, addiction, and voyeurism. I connected with Holly, the twenty-two-year-old babysitter wrestling with being who she wants to be versus the expectations placed on her; I related to Sarah, a mother of a young son dealing with guilt over forging her own path separate from her child, anxious about her son’s safety. But I was neither of these characters.

While I’m admittedly overprotective and nervous about my children getting hurt or someone hurting them, I’ve never watched the people who care for them as intently as Sarah. And though like Holly, I needed courage to follow my own passions, I don’t long for love and affection because I’m blessed to have an incredible family and friends. I saw both these women but could maintain a distance because my life was so different from theirs.

But as those two weeks of the worldwide shutdown were supposed to come to an end, the reality was that people were getting critically ill, many dying. Fear replaced the hope that we would get back to normal. In fact, normal life vanished as we all struggled to adjust to the constant onslaught of illness and isolation. Mothers everywhere became full-time teachers, therapists, cheerleaders, a bright light in the darkness.

I was terrified for my children, both their physical and mental health. They would no longer be able to go to school, see their friends, our extended family, enjoy life as kids should, carefree and without worry that they’re going to get sick. My husband’s job became virtual, as did all my promotional events. Suddenly, the four of us were home together all the time, and our cramped house become smaller as I lost any sense of space and time for myself and my work.

The kitchen that is also my office became the place where everyone went to get food, drinks, ask me questions, because, of course, my job as an author meant when I stared off into space, I couldn’t possibly be working. I was, actually, thinking deeply about Sarah and Holly, hammering out plot points, untangling the knots I’d written myself into. But I am a mother, and my kids needed me. So, I jumped whenever they called. I began waking up earlier and earlier until my eyes would automatically fly open at four a.m. (they still do), so I could work in the dark, quiet house when everyone else was asleep.

I quickly became exhausted, burned out, and this was only the beginning of the pandemic, though I didn’t know it at the time. But as anxious and worried and frustrated as I was, there were beautiful shifts that happened, as well. Ones that helped me both as an author and a mother. I truly understood the power of community. It began with my author friends, from debuts to writers who had numerous books published. We banded together to help each other as much as we could. We were all suffering. The books we’d worked on for years were sitting in closed shops; our in-person events and tours were canceled; and especially for debut authors, so many missed out on that magical, once-in-a-lifetime moment of seeing your book on a shelf for the first time.

The parenting community, too, came together to plan Zoom dates for our kids or sidewalk/porch hangouts when the weather was nice; we moms talked all the time, sharing our pain and worry, all innately understanding that it’s the women who carry most of the emotional burden of keeping our children together. We could not fall apart.

And I had Watch Out for Her, on deadline. As stressful and difficult as it was to focus, my book gave me a place to put all my fears. With my editor’s guiding hand and exceptional ability to encourage me to dig deep, I cracked my soul open, pouring everything I had inside me into Sarah and Holly. My second novel became the book of my heart. I’ve never worked as hard on anything in my life.

As the pandemic continued, and we exited then entered lockdown twice more, I wrote, edited, re-wrote. My own anxiety lessened because of all the things I could not control; I learned to focus on the day-to-day more than the future because I realized that we never know what tomorrow will bring. I was and am full of pride over my children’s strength and resilience, and ability to express how they’re feeling, and I was and am proud of my own.

I learned to give my kids more independence, both because of the pandemic and Watch Out for Her, because I simply could not do as much for them, nor should I, as I had done before. I became more grateful, present, appreciating simple pleasures of a bubble bath, a great read, a wonderful TV show. I found solace in my work, family, and friends. I became someone who wanted to live life to the fullest in every way possible, trying to meet my own needs as well as my children’s, much like the journey Sarah and Holly take.

And like writing, being the best mother I can be is a process. I mess up every day. I still worry too much, overthink, burn myself out, and micro-manage my kids’ lives. But I communicate and listen better.

I have no expectations when it comes to the success of Watch Out for Her. I can’t control how many people buy it, read it, love it or don’t, just like I can’t control a virus that has forever changed all our lives. What I can do, though, is go forward with as much appreciation and hope as possible and dream big, for me and my children, because ultimately that’s the beauty of never knowing what’s around the corner. 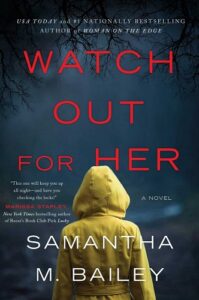 Samantha M. Bailey is the USA TODAY and #1 nationally bestselling author of Woman on the Edge, which has sold in eleven countries to date. She is also a journalist and freelance editor; her work has appeared in NOW Magazine, The Village Post, The Thrill Begins, and The Crime Hub, among other publications. Watch Out for Her is her second novel. Samantha lives in Toronto, where she's currently working on her next book. Connect with her on Twitter and Instagram @SBaileyBooks and on her website at SamanthaMBailey.com.

6 Thrillers That Will Fool the Most Seasoned Readers 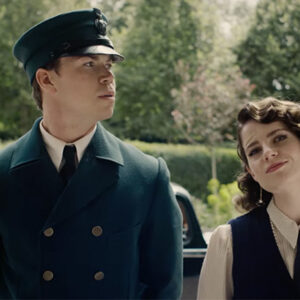 As everyone who reads this website doubtlessly knows—to the point that it might not even be worth saying—there is nothing...
© LitHub
Back to top