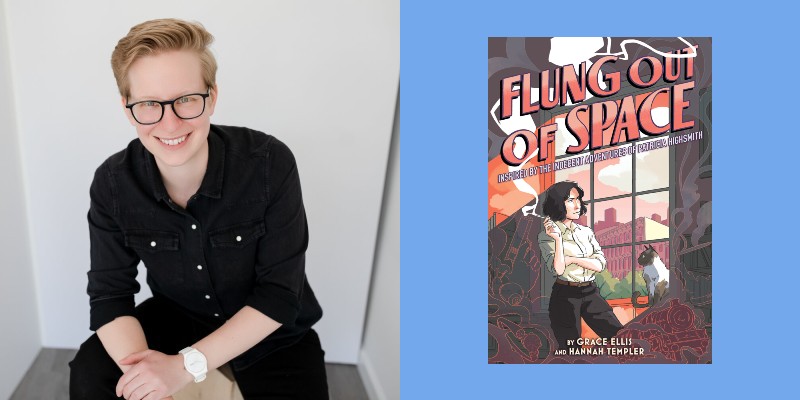 Usually if I get a book way out of the perimeter of my admittedly scattered interests, I put it in the Little Free Library pile. But Flung Out of Space was such a cool idea: a graphic (as in with pictures, not with smut) biography of Patricia Highsmith focused on the time when she sold Strangers on a Train and felt like she could quit her day job working in comics and become a legitimate writer. Thus the story of Highsmith’s quest for legitimacy is not just about her sex life, it’s also about her career; not a word applied to women in her time, but the right word nevertheless). There is also a same-sex love story evocative of Highsmith’s The Price of Salt, a romance between an older married woman and a shopgirl Highsmith published under a pseudonym. I read Grace Ellis and Hannah Templer’s clever slice of Highsmith—a book that came at an opportune time for me—and set up a chat with Ellis.

Lisa Levy: Congratulations on the book. I don’t read a lot of graphic novels, but I read this with a lot of curiosity.

Grace Ellis: I was so surprised when CrimeReads popped up! That’s great.

Lisa: I’m thinking through Highsmith in another way so it felt fortuitous when this showed up. So how did you come to work on Highsmith? How did we get here?

Grace: Well, my introduction to Highsmith was watching Strangers on a Train and The Talented Mr. Ripley. I had a vague memory of reading Highsmith had written comics at one point, just like one line on her Wikipedia. So it’s time to bust out the biographies. And the more reading you do, the more clear it becomes that it’s a hidden history on purpose. The tension is just so interesting. I couldn’t not dig into it. She’s a fascinating figure

Lisa: I came to her through the movies, but more through Hitchcock than Ripley. And her books about suburban malaise are just incredible. I’m doing a project and part of it is about noir versus Gothic. And Highsmith is right in the middle, which is interesting because in general noir codes male and gothic codes female. What happens to you in the world is noir. Gothic is what happens to you at home.

Grace: She would be so excited to hear you describe it in that way. I’m sure she would just be besides herself.

Lisa: You do have to wonder. I like the Todd Haynes movie (Carol, an adaptation of Highsmith’s lesbian romance slash road trip The Price of Salt), but it’s obviously so stylized cause it’s a Todd Haynes movie. I haven’t read the big biographies.

Grace:  Well, now you could just go straight to the source because the diaries are published.

Lisa: I have the diaries and a new biography of Edgar Allan Poe. Both came out around the same time and I’m like, why don’t people want me to finish my project?

Lisa: So how long have you been doing comics?

Grace: About ten years. Before this I’ve written a lot for a YA audience. I’ve written some stuff for DC comics. But I felt like this was a story that only I could tell. I felt very attached to it almost immediately. In Highsmith’s book about writing, she calls it like the germ, the germ of an idea. I was infected by this germ.

Lisa: It takes confidence to know that that is actually all you need. The grad student in me has to make sure nobody’s written this before. Yet unless you plagiarize, nobody writes about the same thing in exactly the same words at exactly the same time.

Grace: That’s a great point. I’m going to trot that out for myself.

Lisa: Well, it’s not a real problem. It’s a way to psych yourself out.

Grace: I love this pep talk. Are you ready to take on all my projects?

Lisa: I work with writers one-on-one, and in every case, it is true that other people’s problems are much easier to solve than yours.

Lisa: Did you and Hannah Templer pitch this together or did you get matched up?

Grace: I pitched it on my own. I didn’t have an artist, but I knew that I wanted to work with Hannah and thank God she had an opening in her schedule and made it happen because her art is so out outrageously good. And she has an incredible understanding of comics as a medium. The book is what it is because of Hannah.

Lisa: In the beginning I felt like this color scheme is period. But then after a while it becomes  more mood than period. Those bursts of orange every once in a while, into her black and white world—it’s so effective.

Grace: In the beginning we knew that it was going to be one color, and we couldn’t figure out what that color was gonna be. Now it feels obvious. I couldn’t have ever picked any other color. I happened to go to this vintage store near my house and I picked up this drawn handbook which is from that time period. And they used this orange.

Grace: I sent Hannah these pictures and she was like, oh my God, it has to be that. It can’t be anything else.

Lisa: I think part of what’s what really works is the way you put together the story of how she sold Strangers on a Train, and her writing comics and finally dealing with her sexuality. It’s all happening at the same time, but it, it doesn’t feel forced.

Grace: That’s kind of what I was thinking when I was working on this book. This is not the world’s only comic biography. But a lot of comic biographies try really hard to be the definitive biography of a person. It’s a terrible medium for that. Comics is a storytelling medium. I want you to tell me a story—tell me a story about the person and make it as true as possible. I read all of the comic biographies I could get my hands on, and there were only a couple like it. And they were such a treat. I knew that that was what this had to be. A story.

Lisa: It’s true when you write nonfiction people are like, Well, I’m writing the truth and I’m like, Well, you’re writing a story. How true it is we’ll never know.

People like plots, like there’s a reason why we have beginning, middle and end. it’s because there’s something satisfying in that.

Grace: As a writer who like really loves mysteries, I’ll happily dive into that.

Lisa: I think that’s what we all want: to read something and make some connection that nobody else has made before. That’s certainly what I strive to do.

Grace: That connection between noir and Gothic. That’s a good one. 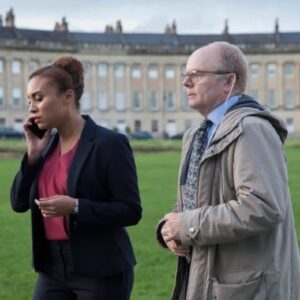 My writer’s group gets together weekly at a local winery. There's as much drinking and catching up as there is putting...
© LitHub
Back to top