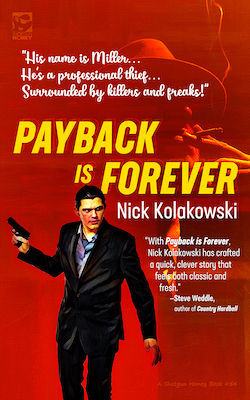 The following is an exclusive excerpt from Payback is Forever, by Nick Kolakowski. Set in the early 1960s, the book starts off with a robbery at an amusement park that goes bloodily wrong. One of the robbery’s planners, a master thief named Miller, decides to hide out in New York City, where he’s quickly ensnared in a mystery involving Nazi gold, shady government agents, and a mysterious microfilm.

The morning newspapers offered precious few developments about the amusement park massacre. The police had discovered the robbers’ vehicle at a rest stop, abandoned and burned. The police said they had leads on the suspects. They were probably lying.

I’ve spent fifteen years in this peculiar profession, Miller mused as he sipped his coffee at the little shop across the street from his apartment. Never had one screw up quite this badly. At least I got all the money.

Once Miller finished his coffee, he walked south. He was dressed in jeans and an N-1 deck jacket a little too warm for the weather. He blended in with the workmen swarming toward the docks. His heart leapt as it always did when he spied the Williamsburg Bridge. His grandfather had helped erect that enormous finger of steel and concrete arching its way across the East River.

He paused outside a Chinese restaurant, knelt, and rapped three times on the rusty sheet-doors covering the cellar stairs. The thud of a lock sliding back, and one of the doors lifted an inch, revealing a reddened eye squinting in the morning light. The eye found Miller and widened. The door slammed down again.

Miller waited, his right hand resting on the .25 in his jacket pocket. Last night’s rain had cleaned the air and sidewalks. From inside the restaurant came the smell of fresh oil boiling, which made his stomach growl. Maybe after this unpleasant business was over, he could stop inside the restaurant for dumplings and rice. Sometimes he enjoyed a second breakfast.

The cellar doors opened again, revealing a hulking man with a dry red beard. His eyebrows rising, he said, “You come bearing gifts?”

“You say that now.” Jonsey disappeared down the stone stairs, leaving Miller to follow him after closing and locking the cellar door. They navigated past a storeroom into a narrow brick hallway, arriving at a rusted iron door. Jonsey unlocked the door with an ornate key.

They entered a room that looked like a combination of shooting range and church. On the far side, shredded paper targets hung on a brick wall scarred by bullet impacts. The near side was a jumble of workbenches, battered metal lockers, and tools, eyed coolly by a line of marble saints on a shelf. They seemed to disapprove of the partially disassembled pistols on the central workbench.

“Grab a seat,” Jonsey said, after locking the door behind them. “Oops, wait, there’s no place to sit. It’s a real crazy alley down here.”

“Your hospitality knows no equal.” Miller leaned against the wall.

“I read the papers. Looks like you had a real mess down there. Those boys tried to cop a heel.”

“Yeah, you did. That was lucky. Maybe next time you’re not so lucky.”

“I’d never talk. Nobody’s gonna put a cross on me.”

“I hope not. But no offense, kid, I’m upright and breathing after all these years because I don’t take what anyone tells me at face value. I know a nose when I smell one.”

“How’s this for face value?” Miller took the fat envelope from his pocket and placed it on the nearest locker.

“How much in there?”

“Your usual, plus five hundred. Call it a retainer, you hear of anything good. No more amusement parks.”

“I might have something for you. Armored car score, Jersey. Easy play, take them on the highway.”

“Dispatcher. Wants ten percent. The take might be fifty grand.”

“This dispatcher, what’s his story?”

Miller shook his head. “No. Can’t trust a former cop as a finger. They always have an angle.”

“This guy, he’s no slim, but okay, forget about it. Something juicy comes up, you’re my first call.” Retrieving a pistol from the central workbench, Jonsey fiddled with the empty cylinder. “Listen, something else I gotta tell you, and no way in hell do I want to be in the middle of this, okay?”

“Trent called me last night. From a payphone in Pittsburgh. At least, that’s where he said he was calling from. He was asking if you were alive.”

“How considerate of him.”

“I said I had no idea, that I didn’t care. He kept calling you ‘Victor,’ so I assume you never slipped up and told him your real name.”

“You tell him where you live? Any details?”

“Given how angry he sounded, I bet he’s coming here with his buddy. Give them another day or two to dodge the roadblocks, plus a day to drive here. If you got someplace else to go that’s not the city, I’d go there. Just for a little while.”

“You don’t think the cops will get them?”

“Newspaper said a clown got killed, plus an employee. Anyone else?”

Miller shook his head. “I shot a guard in the kneecap. Didn’t kill him, though.”

“You’re getting soft in your old age. If you didn’t kill one of their own, cops are less interested in your scalp. Trent and his buddy, I bet they’ll go west, loop up through Ohio, come back. That’s what I’d do, at least. Yeah, call it three days and they’re here.”

Miller considered Trent, bony and tall with a nose shaped like a meat cleaver. An ex-con who seemed dull until you talked money, a topic that made his eyes gleam with animal cunning. A Pittsburgh boy, or so he said. Trent had come recommended as someone who knew the logging roads they planned to use to escape the amusement park. For that reason alone, Miller had signed him on.

Then you had Bernard, who sat quietly until someone mentioned politics, at which point he would talk and talk and talk about how much he hated that prick John F. Kennedy. Bernard thought Kennedy was a pretty boy without his father’s massive bootlegging balls. While Bernard lacked Trent’s viciousness, he was just as dangerous with a gun.

“They always planned to cross me,” Miller said. He had known it long before the amusement park, because guys like Trent and Bernard always crossed you. You might as well expect a crow to never fly.

“Remember what I told you? Don’t get into bed with them. If you didn’t gamble so much, you wouldn’t get jammed up like this.” Jonsey broke the pistol into three pieces. “Anything else I can help you with? Or you stop by just to hear my melodious voice?”

“Don’t you have a gun guy?” Jonsey set the pistol parts on the workbench.

“Well, I’m not your usual gun guy. You buy a gun from me, it’s at a premium, okay? Hundred-twenty. Because it’s a gun meant for someone else.”

“I’m not limited.” Reaching into his pocket, Miller pulled out his roll and peeled off the requested amount in twenties. “I don’t need anything fancy. Just something with power.”

“You need to stop carrying around that dinky excuse for a firearm, that .25.” Jonsey bent to the large safe beside the workbench, wincing as his knees cracked under his weight. “That shit couldn’t stop a mouse.”

“If you say so.” The safe shuddered open, and Jonsey pulled out a pistol wrapped in a white cloth. “This here’s a .38 Smith & Wesson on a .44 frame. Use it in good health. And if you see Trent and his buddy, remember, shoot first.”

Miller slipped the new pistol into the left pocket of his jacket. Carrying two weapons made him feel absurd, like a Western outlaw. But at least he felt a little safer. 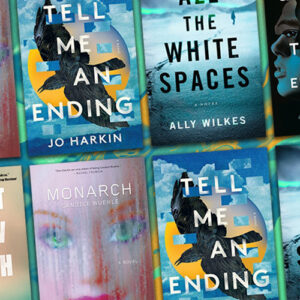