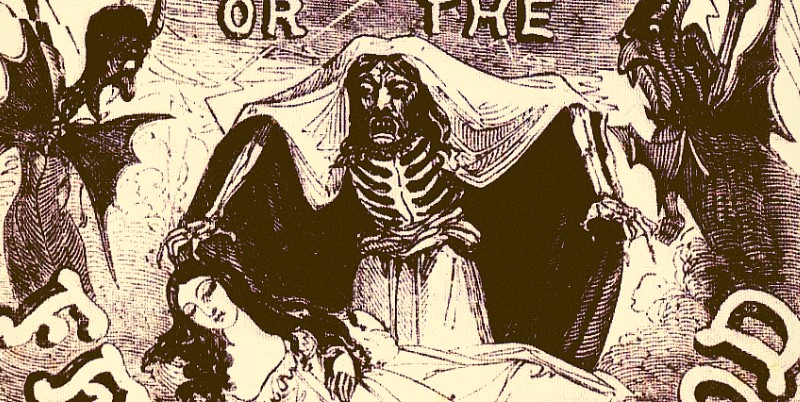 A bodysnatcher unearthing corpses at midnight. A cannibalistic cave-dwelling family. A vampire preying on defenseless virgins. The execution of a handsome yet murderous rogue.

The above are all actual plots of Victorian-era “penny dreadfuls,” a literary genre of sorts which evolved from the lurid crime broadsheets and atmospheric gothic fiction popular in the 1700s. These weekly penny papers were intended to be disposable booklets of equally disposable stories, evolving out of passé gothic tropes, true crime narratives, and the stage melodramas of the time. Their working-class audience had little patience for poetic imagery and foreign climes, so plots were distilled down to the “exciting bits only”.

These days, “penny dreadful” has become a catchall term referring to any macabre 19th century(-ish) literature, although few actual penny dreadful characters have survived in the modern consciousness, perhaps because the booklets they were printed on disintegrated quickly. Frankenstein and his gothic monster predate the penny dreadfuls, while Jekyll and Hyde, Dracula and Dorian Gray sprang from the Victorian fin de siècle literary scene. All had first printings in sturdy, well-bound books and sold to wealthier, arguably “high-brow” audiences. Bram Stoker even took a perennial penny dreadful favorite—the vampire—and emphasized the characters and psychology over shock value, though the story retains some visceral aspects of its penny dreadful Varney the Vampire predecessor.

One of the few penny dreadful characters still remembered today is the notorious London urban legend Springheeled Jack, who vaulted on his famous springy shoes straight into the public consciousness via news headlines in the 1830s. Springheeled Jack reportedly leapt into the paths of young servant girls to physically accost them, ran coaches off roads, and conducted similar mischief. An 1863 penny dreadful titled Springheel’d Jack, Terror of London depicted the titular bogeyman not as supernatural, but as costumed figure in special boots. The demystification of ghostly figures was common in Victorian penny fiction, showing how even minimally-educated readers rejected the superstitions of prior generations.

Another character from penny dreadful lore still known to modern readers is Sweeney Todd the murderous barber. He appeared in many iterations throughout the nineteenth century, most notably (and readably) in a disturbingly plausible story called “A String of Pearls” by (probably) James Malcom Rymer. Sweeney Todd’s origins may not be true crime at all, but an amalgamation of urban legends traceable as far back as 1600s France, along with several unrelated Victorian era news reports including an innocent butcher falsely accused of selling human flesh and a handful of murderess pie makers. Sweeney Todd remains a popular figure, perhaps because the overlapping themes of industrialization and cannibalism continue to resonate in the popular imagination.

The point was to hook the reader immediately and keep them coming back each week for more.

Victorian “penny dreadful” literature developed out of various social trends. The decrease of printing costs due to machine-made paper, coupled with the rise of working-class literacy, allowed the publishing industry to tap a new demographic of readership. Writers churned out material at a dizzying pace, and were paid a mere penny a line. These “hacks” included famous novelists working anonymously (to include Louisa May Alcott and Mary Elizabeth Braddon) seeking to pad their professional incomes. With virtually zero editing or outline, the serial plots were notoriously convoluted, anachronistic, and if a series proved popular, interminable. The point was to hook the reader immediately and keep them coming back each week for more.

In gothic fiction, good and innocence ultimately triumph over evil, but morality in penny dreadful fiction is less straightforward. Instead of an upper-class swell saving the day, peasant mobs with pitchforks might bring down the monster—a cliché today, perhaps, but revolutionary (perhaps literally so) at the time. One glamourous criminal antihero, highwayman Dick Turpin in Black Bess; Or the Knight of the Road, got his comeuppance at the end of a 2,000-page serial, but tragically so at the end of a noose. To members outside the intended audience, penny dreadfuls seemed full of subversive sentiments.

Of course, if an entire genre of literature aimed at young male commoners appears at first glance to be full of contempt for authority and romanticized vice, authority will notice. Penny dreadfuls sold widely, and many young men owned them. They were often blamed for inciting murders, suicides, and runaways—not unlike violent video games are today—whether other extenuating circumstances existed or not. Publishers of this “genre for lost boys” which supposedly “radicalized” the masses were raided by police. Adverse attitudes in publishing led an overhaul of youth-targeted literature by the 1890s, with a push for more positive, moral stories.

Thanks to social and technological changes, penny dreadfuls evolved into an incredibly successful genre during the nineteenth century. They provided escapism, adventure, romance and gore at an affordable price, and pulpy, speculative fiction. Readers today continue to embrace the macabre, the uncanny, and the joy of losing ourselves in an addictive book or series—just like our not-so-straight-laced Victorian forebears. 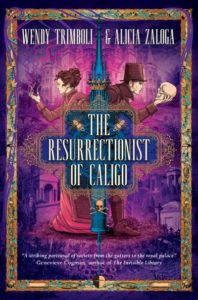 Wendy Trimboli grew up in England, Germany and the United States, and learned to speak two languages well enough that most people can understand her. Determined to ignore her preference for liberal arts, she attended the US Air Force Academy then worked as an intelligence officer, which was less exciting than it sounds. These days, she has a creative writing MFA from Vermont College of Fine Arts, and lives in Colorado with her family, border collie, and far too many books. Alicia Zaloga grew up in Virginia Beach not liking the beach, and now moves every few years, sometimes to places near beaches. She has a writing degree from Columbia College Chicago, and when she’s not dealing with life’s chores, she collects hobbies: plucking the E string on the bass, producing an alarming number of artistic doodles, and French beading floral bouquets.

A Step so Grave 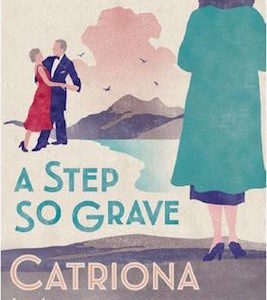 A Step so Grave

18 April 1935 Hugh, cloaked in righteous indignation as well as a measure of true sorrow for Lady Love’s demise and his usual...
© LitHub
Back to top