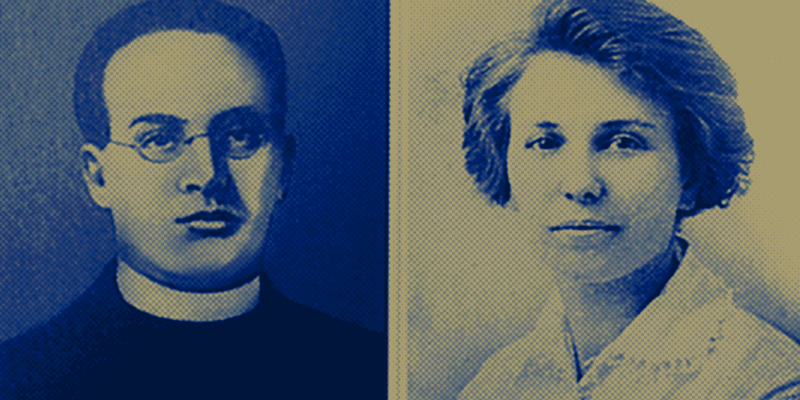 How the salacious double murder of a minister and a choir member in 1922 inspired one of the earliest legal thrillers.

How do we decide which is the crime of the century? In our culture of non-stop trial coverage and devotion to true crime, there always seems to be a new candidate for the headline: O.J. Simpson. Casey Anthony. Ted Bundy. We can name them, debate them, and recite every element of those real life stories.

In 1922, the crime of the century was a particularly scandalous murder case in Somerset, New Jersey. In what became known as the Hall-Mills murders, an episcopal minister and an attractive member of his church choir—each of whom were married to others—were found shot dead under a crab apple tree, their bodies suggestively positioned in death, and torn-up love letters placed beneath their corpses.

The press attention was relentless—Damon Runyan covered it, as did Mary Roberts Rinehart. Apparently readers couldn’t get enough inside scoop about the machinations of two high-status families, nor of the pivotal (and ever-changing) evidence provided by livestock-farmer witness Jane Gibson, dubbed “the pig woman,” who had discovered their bodies. Reportedly, only the Lindbergh case booted Hall-Mills from the headlines. 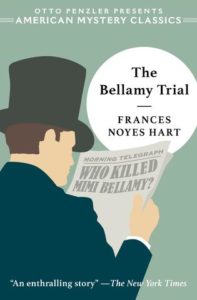 Frances Noyes Hart, daughter of a newspaperman, had already written short stories published in The Saturday Evening Post, but she took the bones of the scandal and, with a wry and witty style echoing F. Scott Fitzgerald’s, wove her own mystery about east coast infidelity and notoriety, calling it The Bellamy Trial.

In fact, Fitzgerald had written The Great Gatsby just three years before Hart’s novel was published, and the ending of Gatsby, at least one historian speculates, was also partly based on the Hall-Mills murders. Had Hart read that book? Or perhaps both novels were timely peeks into the duplicity underlying the veneer of polite society.

In her endearingly dated (but instantly riveting) courtroom drama, one of the characters—a cynical veteran reporter—comments on the trial that’s underway, with words that many of us have spoken close to one hundred years later:

“And in case you’d like to know what it’s all about,” he explains to a novice trial watcher, “it’s the greatest murder trial of the century—about every two years another one of them comes along.”

Why are we so riveted with true crime? And why has the true-crime-turned-fiction become such a beloved reading staple?

Why are we so riveted with true crime? And why has the true-crime-turned-fiction become such a beloved reading staple?

“A murder trial,” said the red-headed girl softly. “Well, I should think that ought to be about the most tremendous thing in the world . . . The only story that you’re going to be able to interest every human being in, from the president of the United States to the gentleman who takes away the ashes, is a good murder story. . . . The old lady from Dubuque will be at it the first thing in the morning, and the young lady from Park Avenue will be at it the last thing at night. And if it’s a love story too, you’re lucky, because then you’ve got the combination that every really great writer that ever lived has picked out to wring hearts, and freeze the marrow in posterity’s bones.”

A murder mystery, and a love story, maybe several. That’s what we get in The Bellamy Trial, too. The charming and engaging novel portrays essentially what reporters now call “wall-to-wall coverage” of a trial—but in these pages it’s presented from a curious point of view: not quite omniscient but not quite . . . not. It’s as if we were watching the trial with an experienced narrator, one who is not quite telling us what to think, but not quite . . . not. It’s arch and knowing, and carries a personal verdict in every phrase.

For instance: is this person a suspect? “Flora Biggs might have been a pretty girl ten years ago, before that fatal heaviness had crept from sleazy silk ankles to the round chin above the imitation pearls. Everything about Miss Biggs was imitation . . .”

Is this person a good guy? “Not a pleasant voice at all, Mr. Farwell’s; a heavy, sullen voice, thickened and coarsened with some disreputable alchemy.”

And during each witness’s testimony, we are treated to the Nick and Nora commentary of “the red-headed girl” (a fledging reporter from Philadelphia on her first story) and the cynical experienced newshound from New York.

It’s difficult not to imagine Spencer Tracy and Katherine Hepburn, or William Powell and Myrna Loy, in these roles, and their dialogue, spunky and cinematic, makes the reader long for the movie version. (Which, as it turns out, was made by MGM in 1929, although not with much success. The movie of The Bellamy Trial is lost to history—apparently only reels seven and eight exist. But do, if you will, look up the actress Betty Bronson who was cast as the “red-headed girl.” She is quite perfect and, after reading the book, you can easily imagine her in the role. )

Fifty-eight years before Presumed Innocent, about thirty years before Anatomy of a Murder and Twelve Angry Men, and six years before The Case of the Velvet Claws, the first Perry Mason mystery, The Bellamy Trial is surely one of the very first legal thrillers ever written. (Agatha Christie’s seminal Witness for the Prosecution, then a short story called Traitor’s Hands, was published two years before Bellamy, in 1925. Had Frances Noyes Hart read it? Even heard of it? We will never know.)

But Hart brilliantly brings her fictional murder of the century to life in a groundbreakingly avant garde structure: Set in a fictional courtroom in the fictional town of “Redfield, county seat of Bellechester, twenty-five miles from the metropolis of New York,” the reader is taken step-by-step, word by word, legal argument by legal argument, through a scandalous and riveting murder trial set in the affluent suburbs of Rosemont and Lakedale. It is only after the verdict that the reader is taken into a different setting—and even that is still simply another room in the courthouse. Every other element of the tale is as described on the stand, and in a tour de force of point of view, through the memories and motivations of the witnesses.

Savvy readers, even non-lawyers, will recognize the legal anachronisms and writer’s conveniences: a jury comprised of only men, one that gets impaneled with nary a question from the judge or attorneys, where future witnesses sit in the courtroom to hear the testimony of those who take the stand before them, where the same lawyer represents both defendants, witnesses are allowed to relate entire episodes, and hearsay seems to be a randomly applied violation. But we forgive the technical imperfections—the story is a page-turner, subtle and careful and knowing and intricately plotted, with the truth tucked in along the way.

Hart is such a clever writer, and that makes this charming novel—which was serialized in The Saturday Evening Post—far more than a trial transcript.

Like a murder mystery without a detective, The Bellamy Trial puts the reader in the position of juror, weighing, essentially, only the testimony from the witness stand, and forces us to rely on that to come up with a fair verdict.

With Whartonesque overtones and trenchant social commentary, the world of the scandalous crime emerges: silver dancing shoes, silver flasks, country clubs, cocktail parties, maids, nannies, and families with day and night nurseries; and the reader understands the milieu Hart is allowing us to grasp: the attendant wealth and lack of it, the undercurrent (usually under) of class struggles, and the battle for acceptance in social circles. Passionate love and broken promises, parental manipulation, the deceit and gaslighting that can only come from love and money and greed and control.

And lest we miss any crucial points, our red-headed girl and the cynical reporter provide a Greek chorus to the testimony—never missing a news deadline, of course—but filling in the blanks for us as necessary, with bits of juicy gossip, or backstory, or their personal guesses about whodunnit.

Like a murder mystery without a detective, The Bellamy Trial puts the reader in the position of juror, weighing, essentially, only the testimony from the witness stand, and forces us to rely on that to come up with a fair verdict. And then of course, to discern the truth of what really happened that night in the gardener’s cottage. A truth which is not, as we well know, always revealed when the final gavel falls.

“Truth, oh, what you’re going to learn before you get out of here, the hunt for truth, is it?” the reporter says to the red-headed girl. “Well, now, you get this straight—if that’s what you’re expecting to find here, you’ll save yourself a whole lotta bad minutes by taking the next train back to Philadelphia.”

But in the end—in a reader’s moment of “we should have figured that out!”—Hart does reveal the truth. And we know what really happened.

(As for what will happen to the reporter and the red-headed girl? Their banter and blossoming relationship may create another love story, one that (adorably) takes place in the margins, but serves as another way to bring this mystery to life.)

The author was the daughter of Frank Noyes, a well-regarded publisher of the Washington Star and honorary president of the Associated Press. After attending Miss Porter’s in Farmington, Connecticut, Frances studied at the Sorbonne and Columbia University. In World War I, according to her New York Times obituary, she worked with the Naval Intelligence Bureau and also served overseas doing “canteen work for the YMCA.”

It’s a tender thought, isn’t it? Frances Noyes Hart writing this, in 1927. Reading it, we all know what was about to happen in the world. The financial ruin around the corner, and another devastating war to follow. But she could have had no idea how lives would change.

In 1927, when this book was published, Sinclair Lewis’s Elmer Gantry was number one on The New York Times bestseller list (with Dorothy Sayers’ Unnatural Death and Thornton Wilder’s The Bridge of San Luis Rey not far behind). Lindbergh flew the Atlantic, and work began on Mount Rushmore.

In 1927, Mary Higgins Clark was born. And with the publication of The Bellamy Trial, so, it seems, was the legal thriller.

From the introduction to Frances Noyes Hart’s The Bellamy Trial. Copyright 2019 by Hank Phillippi Ryan. Used with permission of the author and American Mystery Classics. 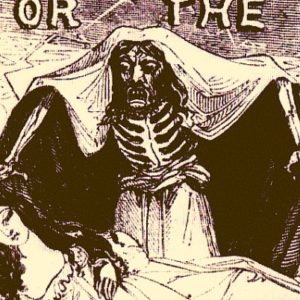 A bodysnatcher unearthing corpses at midnight. A cannibalistic cave-dwelling family. A vampire preying on defenseless virgins....
© LitHub
Back to top