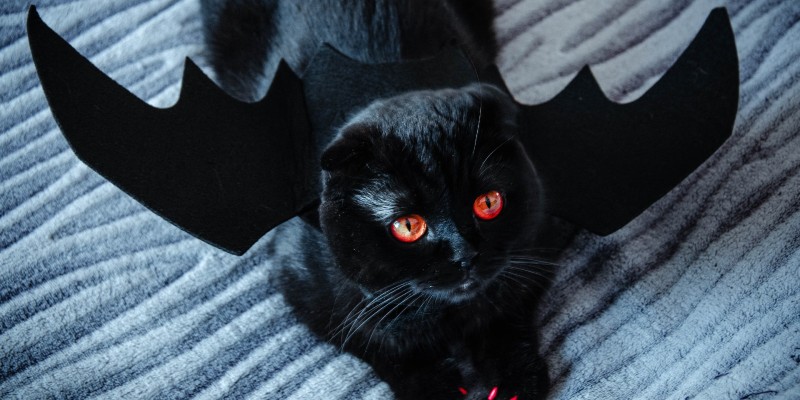 Pumpkins and Peril: Halloween Mysteries For Us Scaredy Cats

I have a lot of emotions about autumn—love, hate, jealousy, and fear. I’ll get to all of them, but let’s start with fear and hate. The fear begins on September 1st. Now you might think that is because I live in Miami, and that’s when the hurricane season heats up, but no. It is because that is when the scary movie ads begin. Jump scares are not my love language. I hate having to watch movie trailers with my eyes shut and my fingers in my ears. Horror films are like PSL to me. I don’t care for them, but I’m not going to stomp on anyone else’s joy. So, if seeing a red balloon floating by a sewer drain fills you with endorphins and glee, then this list might not be for you. But if you are a scaredy cat like me, then put the kettle on because I have some cozy mystery reads for you that have all the season’s treats and costumes but none of the horror and gore.

The first book on the list is set in coastal New England. This is where my jealousy kicks in. I envy the cooler temperatures that people get in the higher latitudes. October 31st in Miami is still hot and humid—a carved pumpkin turns to mold in about two seconds. Drawn & Buttered by Shari Randall (Lobster Shack #3) has all the spookiness without the scares. Allie Larkin attends a Halloween party on an estate where a body of a local college student is discovered in the centuries-old family cemetery. The discovery rekindles whispers of skeletons in the family closet, and Allie becomes a target for someone who wants old secrets and crimes to remain buried.

Keeping to the cooler climes, Mischief, Murder, and Merlot by J.C. Eaton is set in New York’s Finger Lakes district at the Two Witches Winery during Hallow Wine Weekend. You can always count on a cozy for puns and alliteration.

It is said that red wine pairs well with chocolate which leads me to Fudge Bites (Candy-Coated #7) by Nancy Coco. The action takes place during a zombie walk (for charity) on Mackinac Island. Another book with a zombie walk, well, ok, it’s a zombie bike ride, is Lucy Burdette’s Killer Takeout. #7 of the Key West Food Critic Mystery series revolves around Fantasy Fest, a weeklong party on the southernmost point of the USA. I mentioned Miami is hot in October; well, so is Key West. That may or may not be the reason that real Fantasy Fest participants are often scantily clad. Burdette handles it tastefully on the page, but if you ever plan to visit Key West the week before Halloween, leave the kiddies home.

While we are on the food theme, check out the first in the L.A. Night Market series, Death by Bubble Tea by Jennifer. J. Chow. The Halloween vibe is light in this one, but there are delightful costumes. Don’t read this one hungry, or you may want to lick the pages. Chow’s food and drink descriptions are wonderful. Another California cozy set in Fall with food at the forefront is A Measure for Murder (Sally Solari #2) by Leslie Karst.

The next two titles are set in North Carolina, Harbored Secrets by Bree Baker (Seaside Café #5) and The Spook in the Stacks (Lighthouse Library #4) by Eva Gates. Both stories have ghosts/hauntings in them but don’t be frightened. I assure you the pirate ghost in Baker’s story is of the Scooby Doo ilk. And the boo haunting the Lighthouse Library is stealing tricks from The Legend of Sleepy Hallow.

If (friendly) ghosts are your thing, try Be My Ghost (Haunted Haven #1) by Carol J. Perry. The main character, a young woman from Boston, inherits a B-n-B on Florida’s Gulf Coast. The author also writes the Witch City Mystery series. Grave Errors (#5 in the series) is filled with a spooky Salem atmosphere and plenty of tombstones. Ellen Byron’s Murder in the Bayou Boneyard (Cajun Country #6) has a B-n-B setting as well. It won the 2021 Lefty Award for Most Humorous Mystery Novel. The adorable basset hound on the cover is dressed-up, and yes, there is a pet costume contest in the story. Pets are to cozy mysteries as candy corn is to Halloween.

If harvest festivals are more your speed, try Abby Collette’s A Killer Sundae (Ice Cream Parlor #3). Not only will you get hot air balloons and hayrides, but delectable ice cream recipes are included. A Killer Crop (Orchard Mystery #3) by Shelia Connolly has terrific cover art in fall colors. True to the illustrated cover, it centers around an autumn festival. The second book in my Caribbean Kitchen Mystery series, Calypso, Corpses, and Cooking, begins with Miriam Quiñones and her family on their way to a fall festival.

Put Lord of the Wings by Donna Andrews (Meg Langslow #19) on your fall TBR list if you love costumes. Meg, head of the Goblin Patrol, attempts to keep the costumed revelers safe and happy, but a dead body found in the woods causes things to spin out of control.

I had a lot of fun with the costumes in my latest story. Cooking show star, Miriam, dresses up as Chef Vampira, complete with a blood-stained apron (beet juice) and fake fangs. Occasional drag queen, Jorge, gets several outfit changes. The story progresses through Halloween and ends with a Thanksgiving dinner. Between the two holidays, there are murders to solve and a food truck gala to plan.

Speaking of food trucks, how about a coffee truck mystery? Emmeline Duncan’s forthcoming Flat White Fatality (Ground Rules #3), available May 2023, has corn mazes, crisp Oregon October weather, and a team-building exercise that demands duck costumes. (As in people dressed as ducks, not waterfowl in witch hats.) I have more autumnal cozy preorders for you. A Streetcar Named Murder by T.G. Herren (12/6/22) is set during Halloween in New Orleans. What fun! Plus, I love the cat looking out the antique store’s window on the cover. It has an impish grin.

Libby Klein’s 8th Poppy McAllister mystery, Mischief Nights are Murder, comes out in August 2023. If you’ve read any of the Poppy series, you know the spotlight grabber is Sir Figaro Newton, a black Persian cat. The cat in my Caribbean Kitchen series, Camo, a calico, is not as naughty as Figaro, but she does slip out of the house occasionally chasing a lizard. One of Camo’s excursions leads Miriam to an ominous message painted on the side of the house. At first glance, Miriam and her police officer in-law think the “Help Murder” message is a prank. No spoiler, you’ll have to read Calypso, Corpses, and Cooking to find out if it is or isn’t.

If you haven’t guessed by now, I love autumn and all the celebrations that come with it. I think cozy mysteries set in the season are some of the most enjoyable. They deliver thrills and chills while keeping the reader snug, comfy, and safe from the terrors of fanged tooth monsters. Cozy Mysteries are armchair travel to whatever the reader needs, be it cooler weather, dress-up fun, sugary treats, or a crime to solve. 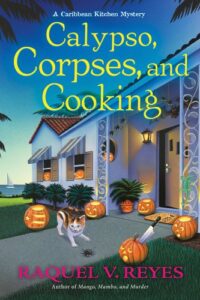 RAQUEL V. REYES writes Latina protagonists. Her Cuban-American heritage, Miami, and Spanglish feature prominently in her work. Mango, Mambo, and Murder, the first in the Caribbean Kitchen Mystery series, won a LEFTY for Best Humorous Mystery. It was nominated for an Agatha Award and optioned for film. Raquel’s short stories appear in various anthologies, including The Best American Mystery and Suspense 2022. Find her across social media platforms as @LatinaSleuths and on her website LatinaSleuths.com Her new novel, Calypso, Corpses, and Cooking, is now available from Crooked Lane Books. 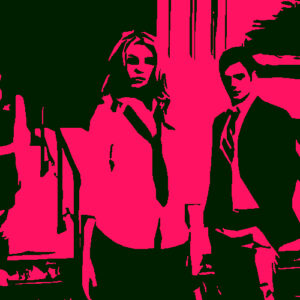 I binge-watched all six seasons of Gossip Girl the summer after I turned fifteen. It’s been seven years since then, but I remember...
© LitHub
Back to top