Why Rape Memoirs Must be Read as True Crime

The last time I wrote about rape here I focused on rape in crime fiction. In asking questions about how rape culture infuses our crime fiction, I wanted to start a conversation about why violence against women is so endemic in crime fiction, and what desires it evokes or satisfies in readers.

In this essay I want to probe even harder issues, because I want to ask the same questions about true stories of rape. These stories are usually classified as memoir—some of the books I’m referring to include Lucky by Alice Sebold (1999), Jane Doe January by Emily Winslow (2016), The Other Side by Lacy M. Johnson (2014), My Body is a Book of Rules by Elissa Washuta (2014), and the just released anthology Not That Bad: Dispatches from Rape Culture, edited by Roxane Gay. It’s notable that these books are classified as memoir, rather than true crime, as if women (and in the Gay anthology, men too) describing the ways they have been violated and abused are not crimes but events that unfortunately transpired and can be filed under the nebulous and all-encompassing heading of personal experience. This might seem like a marketing quibble: publishers put books into genres in order to help the books find their audience. Yet what I’m arguing here is that the memoir classification for accounts of rape shrinks their cultural importance: everyone knows that true crime is a booming and serious genre, while memoir already had its heyday around 20 years ago and is now a catchall for personal stories regardless of their larger context.

Though the mantra in the #metoo era is to believe victims, the writers of these books nearly all start out with a qualification or an apology. it’s right there in Sebold’s title: she is repeatedly told that was lucky not to be murdered, just raped. Both Sebold and Winslow were victims of stranger rape, while Washuta and Johnson were raped by men with whom they were or had been in relationships. That this is an important distinction speaks volumes about our attitude toward rape as a crime. Sebold is cognizant that her story is taken more seriously because she was assaulted by a stranger, especially when she identifies her rapist after seeing him on the main street in her college town of Syracuse, New York. Sebold is what police call a good victim: not drunk, a virgin, attacked by a stranger on campus while walking back to her dorm, able to remember many of the details of her rape. Yet she still feels like she’s done something wrong, and she directly addresses the people who wonder why she wouldn’t just leave college or transfer to a different one after her rape:

“I couldn’t get away from it. I began to wonder how many people knew, how far the news had spread and who had spread it…But you can’t control a story and mine was a good one. People, even naturally respectful ones, felt emboldened in the telling because the assumption was that I would never choose to return. The police had placed my case in the inactive file when I left town; my friends, save Mary Alice, had done the same. Magically I became story, not person, and story implies a kind of ownership by the storyteller.”

Sebold is emboldened by telling her story, which is a story about being “lucky” as she escaped with her life, and her case goes all the way to trial. Her rapist is indicted on eight counts, and Sebold is praised for her excellent performance as a witness by the bailiff in the courtroom during her rapist’s trial. He was found guilty on six counts, remanded by the judge, and sentenced to the maximum for rape and sodomy: eight and a third to twenty-five years. Sebold went on not only to write this very powerful memoir, but also the bestselling novel, The Lovely Bones, another book which deals with crime and women’s trauma: it’s narrated from the afterlife by a girl who had been raped and murdered by a neighbor.

Another memoir about a college-aged woman who was raped, Lacy M. Johnson’s The Other Side, is a less direct and more diffuse account of rape and its traumatic aftermath. Though Johnson was kidnapped and raped by her ex-boyfriend, she refuses to narrate the details of the attack, to give the reader the satisfaction of knowing the true story, until the end of her book. When she does, it’s deliberately brutal:

“Here is the shortest version: for five hours on July 5, 2000, I was held prisoner in a soundproof room in a basement apartment rented for the sole purpose of raping and killing me.

I could also say I lived with my kidnapper for two and a half years, and during all the time we lived together he didn’t call it rape but fucking. When I finally moved out, he thought it would take only a few days of good, hard fucking to convince me to come home. If I refused, he planned to shoot me in the cunt and then the head.

His words, not mine.”

Johnson’s appropriation of her rapist’s words—also her ex-boyfriend’s words—makes her account especially harrowing. When put in language like that, how could anyone think what happened to her was her fault? Victim blaming, after all, is a hallmark of stories of date or acquaintance rape, but Johnson was not only not at fault, she is indisputably the victim of a callous and pathological man. She mentions in a passage that comes quickly after this one that “if people ask what my book is about I do not say it is about the time I was kidnapped and raped by a man I used to live with. That level of honesty borders on rude. It is against the rules of polite society to admit having been raped to a near stranger.” Yet the power in Johnson’s story—and in all of the rape memoirs listed above—lies in telling polite society to fuck off. If that’s what it takes to get people to recognize that rape is a crime, not just an experience, or a story, then that’s the way these stories must be told. The stakes are too high, the statistics too awful, the accounts of living in rape culture are too disturbing to shuffle them off to the memoir shelf.

So what does a rape have to do to be a true crime story? Well, it helps if the perpetrator is a serial rapist, as in the 2018 book A False Report: A True Story of Rape in America by Pulitzer Prize-winning reporters T. Christian Miller and Ken Armstrong. A False Report is about just that: a woman in Washington state reports a rape, only to be interrogated so viciously that she retracts her story. It’s only when other rapes are reported in other states with the same details that Marie’s story is validated. As Miller and Armstrong write from the point of view of authorities who investigate rape cases:

“Rape was a special case. The experience of rape, the feeling of helplessness, impaired memories in ways that seemed almost designed to frustrate investigators. To endure the terrible present of violation, many women looked away from what was happening to them, looked away from their attacker. They focused on a lampshade or a painting on the wall. Or they closed their eyes. That meant women could often not describe the rapist, or what he wore, or the room, the time, the surroundings.”

Because of what trauma does to both lived experience and memory, even when rape victims are believed they are often accused of changing the details of their stories. Miller and Armstrong put the statistic for false reporting of rape at between 2 and 8 percent, a minuscule number, especially given that many rapes are not reported to authorities at all because victims are too traumatized or afraid that they won’t be believed precisely because their recall of the event is fuzzy.

Even rape cases that captured the public imagination are not documented in true crime books. A prime example is the Steubenville High School rape case from 2012, in which a drunk high school girl was penetrated by several members of the football team, who then circulated pictures of the incident on social media. The investigation of the incident was complicated by the involvement of adults, particularly coaches and school officials, who failed to report the rape in order to protect the athlete perpetrators. There was scant justice served in Steubenville: two of the boys involved were sentenced in juvenile court with the possibility they would be incarcerated in a juvenile facility (both have since been released and have avoided being added to the registry of sex offenders). If what happened in Steubenville had been a rape/murder—if there had been a dead girl rather than a live one at the center of the story—I’d venture that there would be at least one, if not multiple, books about the case.

A similar case in bucolic Glen Ridge, New Jersey in 1989 is the subject of the insightful 1997 book Our Guys by Bernard Lefkowitz. The girl who was violated by a group of high school athletes in Glen Ridge was mentally retarded, which made the boys’ behavior even more egregious than the boys in the Steubenville case. Lefkowitz thoroughly and sensitively reports this awful story, drawing parallels between the attitudes in Glen Ridge which led to the athletes’ disturbing sense of entitlement to facing the intricacies of consent in America at large. After learning about the Glen Ridge crime, Lefkowitz writes:

“Millions of Americans discovered that Glen Ridge was not a foreign and alien culture, but all too closely resembled their own communities. Glen Ridge’s test of character became America’s test of character. Glen Ridge ultimately found that it could not insulate itself against the turbulence created by an outrage that in the past would have been hidden and buried. Like Glen Ridge, America has been forced in recent years to define what are fair, just, and principled relations between men and women. That hasn’t been easy for Glen Ridge to do. And it hasn’t been easy for America either.”

No, it hasn’t been easy for America at all, and, of course, it’s not just America that has to face up to our poor victim blaming and shaming attitude toward rape. Women are raped, abused, and otherwise traumatized all over the world. But we do have a choice, or a responsibility, as global citizens to call rape by its proper name: it’s a crime, no matter who perpetrates it and who is the victim. We don’t say that murders, or burglaries, or assaults have good victims. Why should rape be any different? 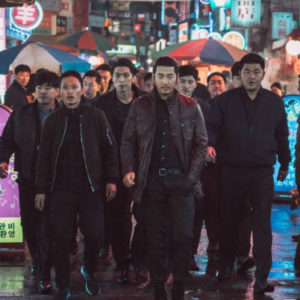 In the name of peace and reunification athletes from North and South Korea marched into the stadium under a joint flag at this...
© LitHub
Back to top