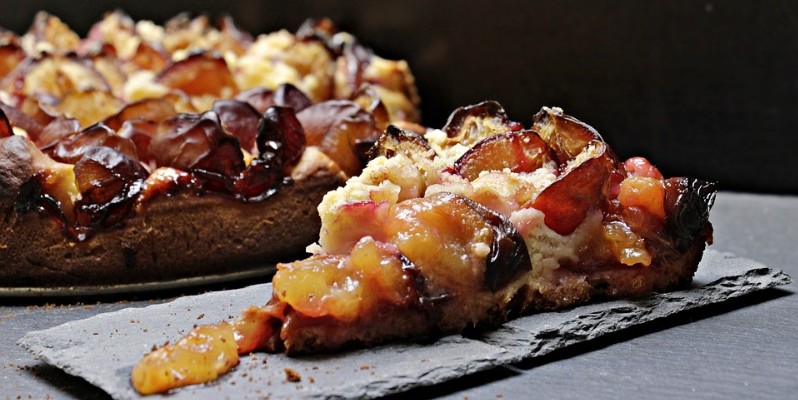 Reading and Recipes: A Cozy Combination

The Great British Baking Show is one of the hottest cooking themed television programs. Amateur bakers attempt a different baking skill and hope their end result moves them into the next round of the competition. Judges evaluate the baker’s end result and give tips on how to improve the recipes. Over the course of a few weeks, with a harder challenge each round, the amateur bakers undertake each challenge with grace. Even in tense moments, they support their fellow competitors. There is no drama on this show. Egos are kept in check. Tempers never flare. The atmosphere is congenial.

But what if it wasn’t?

That is the idea I explore in Cobblered to Death, the first book in my new Courtney Archer Mystery series. Courtney, a trained chef and cooking show host of Cooking with the Farmer’s Daughter, is asked to cohost a genteel baking competition similar to The Great British Baking Show called The American Baking Battle. Excited to be involved in a drama free show, Courtney is shocked to learn that behind the scenes conflict abounds which eventually leads to murder.

The contestants competing for the prize money run the gambit from home cooks to bakery owners to retired chefs to boutique donut shop owner to barbecue champion and more. The fun part of writing this mystery series was assigning the challenges to the contestants and researching the various ways to prepare the challenge recipe.

Variations of food themes are a staple in the cozy mystery genre. While devouring the plots, readers are introduced to ethnic or comfort foods, decadent beverages or sweet treats. Not only do readers partake of a delectable mystery—many of these books include scrumptious recipes to try at home. The food themed cozies listed below are sure to satisfy your reading cravings as well as your hunger! Recipes are included in all of these books. 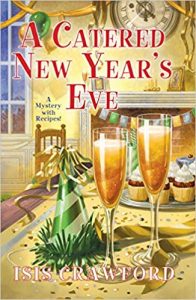 This is book number fifteen in Iris Crawford’s A Mystery with Recipes series. Sisters, Bernadette (Bernie) and Libby Simmons run a catering business. What a great occupation in a food themed mystery! It allows for a variety of recipes in each book. This book finds Bernie and Libby catering a bash for a long lost relative who is trying to solve long-ago deaths, but instead gets arrested for murder when a dinner guest drops dead from drinking cyanide laced champagne. Bernie and Libby must solve this murder to ring in a Happy New Year. 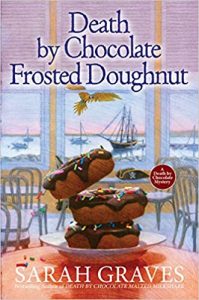 Sarah Graves’ Death by Chocolate Mysteries are a yummy read. Death by Chocolate Frosted Doughnut is book three in her series. Jacobia “Jake” Tiptree and Ellie White own The Chocolate Moose, a waterfront bakery. Gearing up for an annual Pirate Festival, Jake and Ellie are expecting tourists not a dead body left in their bakery’s basement. To complicate matters, Jake becomes a person of interest in the murder. Jake and Ellie turn to sleuthing to find the real killer, clear Jake’s name and save their bakery. The recipe in the back of this book is every chocoholics dream! 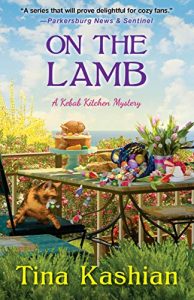 On the Lamb, by Tina Kashian

Lucy Berberian runs her family’s Mediterranean restaurant in The Kebab Kitchen Mystery series by Tina Kashian. The recipes included in this series reflect the flavors of Lucy’s heritage. In the fourth book of the series Lucy is planning for Easter. Her holiday preparations are interrupted when another local business person, a candy maker, is the main suspect in the murder of her antagonistic landlord. An annual event, Bikers on the Beach, Lucy’s determination to discover who murdered the landlord and the fast approaching Easter holiday, keeps Lucy hopping throughout the story. 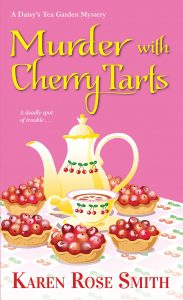 There is always a case brewing in a Daisy’s Tea Garden Mystery by Karen Rose Smith. Amateur sleuth, Daisy Swanson steeps tea and bakes up mouth-watering sweet treats. With the recipes found in these books, you can throw your own tea party. Like the three prior books, Daisy’s urge to investigate is sandwiched between multiple commitments, planning her daughter’s wedding and her growing concern over her employee’s involvement with a down-on-his-luck single dad. When the single dad becomes the main person of interest in a store owners bludgeoning, Daisy’s investigative skills start to brew helping her find the guilty party. 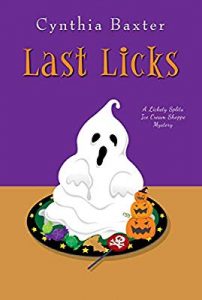 In A Lickety Splits Ice Cream Shoppe Mystery #3, Kate McKay gets the offer of a lifetime-to have a movie scene shot in Lickety Splits. Who could say no? Especially when one of the props is a scoop of her ice cream. However, when the actress who eats the ice cream dies from poisoning, Kate finds herself in a gallon of trouble. The main suspect in the murder, Kate scoops through the clues and a varied menu of characters to clear her name and make sure the killer is arrested. Like the plot of the book, the recipes included are killer good!

Wouldn’t it be fun if Daisy, Bernie, Libby, Kate, Lucy and Jake competed in a baking challenge? Would it be a civil competition? Or a fierce baking battle? Either way, they’d leave readers hungering for yummy food and the next book in the series.

Rosemarie Ross is a pseudonym of multi-published in multi-genres author, Rose Ross Zediker. Rose writes cozy mystery novels, contemporary and historical inspirational romance novels, and has hundreds of publishing credits in the Christian magazine genre for children and adults. Her titles have appeared on ECPA bestseller lists and been finalists for the RITA, National Reader’s Choice, Booksellers Best and Book Buyers Best award contests.
https://rosemarieross.com/ 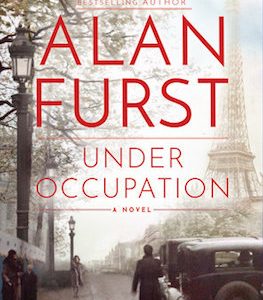 Occupied Paris, 1942. In early October, the first of the Autumn storms Began in the late afternoon, with rumbles of thunder...
© LitHub
Back to top