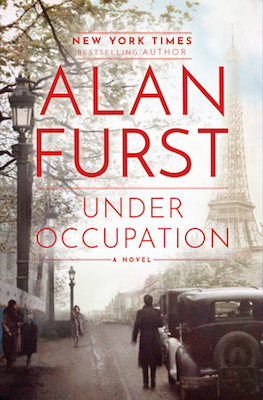 The following is an exclusive excerpt from Under Occupation, by Alan Furst. In this WWIII-set thriller, an unsuspecting writer receives a document from a man who dies immediately thereafter. The writer thinks the message might contain blueprints for a weapon, but he knows that, whatever it is, he has to get it in the hands of the Allied forces as soon as possible.

In early October, the first of the Autumn storms Began in the late afternoon, with rumbles of thunder up in Normandy somewhere, then, by nightfall, the rain reached Paris, where it beat against the windows of the gray city and streamed down the channels at the edges of the cobblestone streets. The writer Paul Ricard walked bent over in the downpour, headed up a narrow street of ancient buildings in the Sixth Arrondissement: the Rive Gauche, the Latin Quarter.

Ricard squinted into the darkness, some of the streetlamps had been shattered, others painted blue for the blackout ordered by the German Occupation Authority, and the coal smoke that drifted through the rain made it even harder to see anything. Turning a corner he found himself on the Rue de l’Odéon, once home to Shakespeare and Company, Sylvia Beach’s English-language bookstore. But the store had closed a year earlier and now Ricard, a writer of detective and spy fiction, had to get his newly published novels of intrigue at a recently opened store called The Bookshop, on the nearby Rue de Condé. Ricard, rain dripping from the rim of his fedora hat, took a narrow alley to the street—he could reach out and touch the buildings on either side. He was headed for The Bookshop to see a friend who had, voice excited, telephoned and asked that he come see her at the shop.

When Ricard entered the bookstore, his friend, an émigré Pole called Kasia, was manning the cashier’s desk near the door. In her twenties, Kasia looked like a Parisian street kid: she had dark eyes and dark hair cut short—a boy’s haircut—atop a firm, well-curved body. She wore a worker’s tweed cap, a navy pea jacket—likely bought at a used-clothing barrow—mole-colored trousers, and ankle-high, lace-up boots. Ricard nodded to her and waited while she served a customer, a German officer, tall and stern. “Delta of Venus,” she said to the officer, “in fact all the Anaïs Nin erotica, is written for a private collector, so it’s not available.”

“Oh, is that so.” The officer was clearly disappointed.

“But we carry a book, a kind of diary, that’s similar. Would you care to have a look at it?”

“Why yes”—the German visibly brightened—“I would love to see it.”

Kasia looked at Ricard as she left the desk and raised her eyes to heaven: yet one more German trying to buy dirty books. She left the desk, walked over to the shelves, and returned with a slim volume. On the soft cover, an artful line drawing of a nude couple in a complicated embrace. “Here it is,” she said. “The Diary of Lady X, it is erotica for every taste, and lavishly illustrated.”

“Thank you,” said the German, in school French. “This will do very nicely.” Ricard could think of nothing but the well- known quote from the rogue publisher, Maurice Girodias, who described such works as “books that one reads with one hand.” The German paid Kasia and left the store with his new book wrapped in a sheet of newspaper.

“That’s the tenth copy we’ve sold this week,” Kasia said to Ricard. “The Boche come to Paris with lists—the best restaurants, the fanciest brothels, and where to buy books that get them ready for the brothels. Where they especially like exhibitions.”

“They’ve conquered Europe, so they can do whatever they like. They think.”

Kasia shrugged. “They’ll go away, Ricard, sent back to where they came from, and here in Paris, we’ll dance in the streets.”

“Yes, we have the book you wanted—Arthur Koestler, Scum of the Earth, it’s sixty francs.”

Richard thanked her, and paid for the book.

Heading down the street, he heard some kind of commotion behind him, and, as he turned to see what was going on, a running man slammed into him.

Ricard left the bookstore and headed for the nearby Café Saint-Germain; the day was dark and drizzling and he needed a coffee. Heading down the street, he heard some kind of commotion behind him, and, as he turned to see what was going on, a running man slammed into him. Both of them fell on the side-walk. In the distance, shouts of “Halt!” and the trills of police whistles. As the man struggled to get to his feet, he mumbled an apology. He was dressed as a worker—baggy, shapeless gray pants and a soiled shirt, but he had the face of an intellectual: a white goatee and spectacles with a cracked lens.

Now, from the direction of the shouts and whistles, a pistol shot, then two more. As the man stood up, the air snapped by Ricard’s ear, and his hand flew to his face, but there was no blood—the bullet had missed him. Meanwhile, all around him, people dove flat on the pavement. Up the street, a woman screamed.

The man now took off running and almost made the corner, but a shot knocked him down. Ricard ran to him as he got to his knees and took the man by the elbows to help him up. As he did, the man whispered, “Here, take this,” and shoved a folded sheet of notebook paper into Ricard’s shirt pocket. Then the man sagged to one side and fell the rest of the way to the street. As Ricard again reached to help him, he saw the life leave the man’s eyes; he stared unknowing at the sky.

Ricard ran into the café as a Paris police car skidded to a stop. He sat down at an empty table where the waiter hadn’t yet removed a coffee cup and pretended to be just another patron. All around him the crowd spoke in undertones: “Who was he?” “A résistant?” Two flics entered the café and, using their pads and pencils, began to look at papers and write down names.

“No, Ricard.” He immediately regretted the correction; he’d had a chance to keep his name unknown, but his reaction had been instinctive.

The flic said nothing, and moved on to a woman, hand still pressed to her heart, at the next table. Ricard took the folded paper from his pocket, opened it, and saw what he believed was an engineering schematic with the hand-printed German word Zünder and the French word détonateur. So, a detonator.

Get rid of it, he thought.

But a dying man had thrust this paper into Ricard’s shirt pocket and Ricard couldn’t throw it away.

The Rising Stars of Crime Fiction in the 2010s

Reading and Recipes: A Cozy Combination 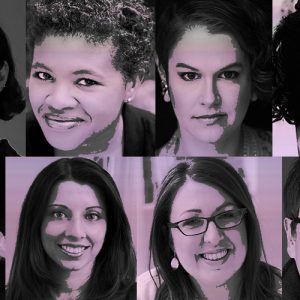 The Rising Stars of Crime Fiction in the 2010s This past decade, we've been pleased to see publishers, readers, editors, and reviewers alike have come to the same conclusion—crime...
© LitHub
Back to top