S.D. Sykes on the Rise and Fall and Rise of Empire

I’ve never forgotten that feeling of first approaching Venice from the lagoon. She smacked me in the face and then she floored me, and I will admit to being enthralled, and not a little love-struck. It was the vast, shimmering splendor of the city that captured me at first; but then, once I’d stepped off the boat, I was captivated on a more intimate level—as she enticed me into her spooky, shadowy lair and never released me.

It’s a sensation that most visitors share, for who doesn’t love Venice—even with her crowds of bewildered selfie-stick tourists; her I-saw-you-coming prices in the restaurants; or even the occasional, drain-like pong in a side alley? She is one of the most visited cities in the world with good reason. People travel there for romantic weekends, for the opera, the palaces, the churches and museums. For cocktails at Harry’s Bar, for drifting along peaceful canals in a gondola, or for getting lost in the maze of alleys that fiendishly weave their way across the city. It’s a place of film festivals, art festivals, or where Hollywood stars go to get married. It’s mysterious, historic and famously sinking into the sea. There’s really nowhere else like it on earth.

But as intimately as travel can acquaint one with Venice, the city is perhaps just as well-known from novels, art and film. From these sources, we have come to accept that Venice is a place of carnivals and courtesans; of Stygian fogs and dark twisting backstreets where something sinful or criminal is sure to lurk. Pick up any novel that’s set in Venice and certain words will leap at you from the blurb: Decadence, seduction, mystery, forbidden love, corruption, excess. And then there is the word that appears with such regularity that it could constitute its own literary sub-genre—“crumbling.” Crumbling Venice could be anything from moldering palaces and peeling piazzas through to the disintegration of the characters themselves. It seems that Venice is fixed in our imaginations as a place of decay. It’s not only gothic in its architecture—it’s gothic in its nature.

When did this love for “crumbling Venice” begin, and why has it taken hold with such tenacity? By the time Victorian historian and art critic John Ruskin encountered the city in the 1840s, he thought Venice was so neglected that she might melt into the lagoon “like a lump of sugar in hot tea.” It’s true that Ruskin feared any further deterioration, but what appalled him to an even greater extent was any attempt to modernize the city. He wanted a Venice that was set in aspic, a time-capsule for posterity. And thus the movement to save La Serenissima was born—and what a successful movement this has been—for Venice is probably the finest preserved medieval and Renaissance city in Europe. Yet all this tender loving care has not been without consequence. It could be argued that she’s been stifled, moth-balled—even de-commissioned as a real city. For, while there is a great deal of industry and development about the rim of the Venetian lagoon, it is almost impossible to find a modern building in Venice herself. For the most part, she is the same city that Ruskin visited, kept safe in her watery refuge and forbidden from growing up.

But it’s not just crumbling Venice that we have come to love through art, film and literature. We’re equally, if not more attached to “decadent Venice”—shameless, lustful, dissipated Venice. We might blame Casanova and Lord Bryon and their epic sexual exploits for bestowing this reputation upon the place, but Venice’s status as a city of pleasure goes back much further in history. By the early 17th century, there were estimated to be as many as 20,000 prostitutes in a city that only numbered around 140,000 people. Even for those not seeking to pay for sex, there was plenty of the stuff on offer—adulterous affairs, secret assignations, riotous carnivals and masked balls. Even the city’s nuns sometimes took lovers. One needs only to look at the paintings of Titian, particularly the eroticism of his 1538 painting “Venus of Urbino” to appreciate that this was a society with a relaxed and permissive attitude to sex.

We have such a romanticized vision of Venice that it’s almost shocking to find that she has not always been the mysterious, decaying flesh-pot of our collective imagination. Until the mid-15th century, she was something rather different: a major industrial power. Imagine Frankfurt, Manchester or Detroit, and suddenly the romance wanes a little. Also, far from falling apart at the seams, Venice was a city of bling and ostentation—something like a cross between Las Vegas and Dubai. The houses, churches, and public buildings were not only pristinely maintained, they were heaped with every ornament and architectural feature that could possibly be affixed to their frontage. There was nothing subtle, romantic or shabby-chic about all of this. Houses were designed so that the façade—particularly as viewed from the canal—would inform the world of the owner’s wealth. Nobody did conspicuous consumption like the medieval Venetians. But for all her materialism and ostentation, 14th-century Venice had an attitude about sex and gambling that ranged from strait-laced to brutally repressive. Prostitution was confined to one small area of the city, gambling was criminalized, and homosexuals were routinely put to death.

This is not the Venice we are accustomed to meeting, but the inconvenient truth is that Venice was once far more interested in trade and manufacturing than debauchery. The Venetians were industrial pioneers, at the forefront of such industries as banking, ship-building and glass manufacturing. The glassmakers of Murano weren’t churning out those gruesome ornaments that now adorn the shop windows of San Marco, instead they were innovators in the field of eyeglasses and mirror production. And regarding production, nowhere was more advanced than the Arsenale, the shipyard of Venice, where the Venetians could build ships faster than any other yard in the world. Indeed, they are credited with inventing the production line. The Venetians also came up with the concept of package holidays. Had you booked yourself a berth in one of their many pilgrim galleys that sailed from Venice to the Holy Land, then the captain of your ship would certainly have made a great effort to sell you a return “excursion” via Cairo or Alexandria. They even set up a tourist office, where pilgrims might book their trips or make their complaints.

For a flavor of this Venice, don’t look at the sensual nudes of Titian or at the wistful, misty seascapes of Turner; look instead at the 15th-century works of Vittore Carpaccio and Gentile Bellini. These paintings show a confident, shiny, in-your-face Venice—a Venice that doesn’t ask you to stare into the distance and sigh at her fading glory but instead demands your attention and admiration for her many achievements. My own favorite is a vast painting by Bellini that can be seen in the Accademia gallery in Venice. Called “The Procession in Piazza San Marco,” it is ostensibly a painting to celebrate a miracle, but the miracle and the procession very much play second fiddle to the Basilica of San Marco in all of its glittering glory. This is a painting that has nothing to do with mystery or dreamy abstraction—it’s all about civic pride. Once again, not so romantic, is it?

So, what happened? When and why did Venice change? The fall of Constantinople to the Ottoman empire in 1453, followed by the discovery in 1497 by Vasco da Gama of a sea passage to India could be counted as the first major blows. Both of these events meant that Venice lost her strategic position in the trade route from East to West. She was literally bypassed, and subsequently she fell into a long and slow decline that lasted until the invasion of the city by Napoleon in 1797, when the Doge was removed and the Republic ceased to exist.

And so Venice came to represent what she is today. More often than not, her cultural past is accepted as all decadence and debauchery—with the thrills, excesses, and naughtiness of her carnivals and courtesans. Her present is most often portrayed with misty romance or shadowy menace, complete with a generous helping of dilapidation and decay. It is a brave writer who leaves these themes out, and yet, in our fondness for this version of Venice, have we created something of a monster? A city that cannot quietly exist in a novel, without drawing attention to herself? And, even more worryingly, does she sometimes become a parody of herself—a lazy shorthand for tales of past dissipations and enduring decrepitude?

I believe its time to cut Venice some slack, and look at her in a different light. It’s true that she is crumbling. And it’s certainly true that she was once the European epicenter of debauchery. But she also has a different past. A serious, powerful, confident past—one that deserves to be remembered and celebrated.

S. D. Sykes received an MA in Writing from Sheffield Hallam in England. She attended the novel writing course at Curtis Brown, where she was inspired to write Plague Land. She lives in England.

Discovering My Grandfather's Hidden Literary Past 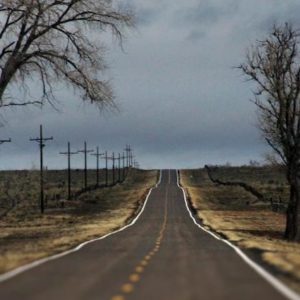 When I was growing up in Iowa, a 12-year-old Des Moines Register paperboy disappeared from his route. The crime made national...
© LitHub
Back to top