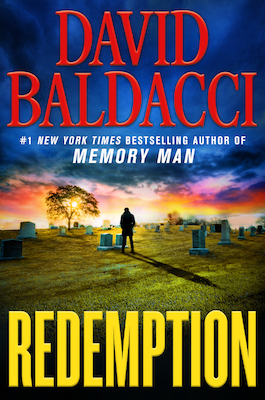 The following is an exclusive excerpt from Redemption, David Baldacci’s newest memory man thriller, which finds FBI consultant Amos Decker back on his hometown turf investigating a series of murders, and questioning the evidence that informed an arrest he made over twelve years ago when he was a rookie homicide detective.

A gentle rain kicked in as Decker trudged along the pavement.

It felt very odd to once more be investigating a crime in his hometown. The last time had involved the murder of his family. This one was different, but it still affected Decker personally.

If I was part of convicting an innocent man?

He looked around as he walked. He had decided not to come back for Cassie’s birthday, or their wedding anniversary. That simply would have been too much for him to handle. Yet he would keep returning for their daughter’s birthday. He had to be here for that milestone, though each visit was emotionally crippling for him.

His long feet carried him past where he was staying, and after a few miles he reached the long-established neighborhood. It was light now. He stopped walking and stood on the corner staring up at the place he used to call home.

The last time he’d been here was two years ago. It looked remarkably unchanged, as though time had stood still since his last visit. Although there were two unfamiliar cars in the driveway, a Ford pickup and a Nissan Sentra.

As he stood there, a man in his early thirties and a girl around seven came out of the side door. The girl was carrying a school backpack and the man was dressed in khakis and a white collared shirt with a windbreaker over it. He carried a slim briefcase in one hand. The girl yawned and rubbed her eyes.

They climbed into the pickup truck and backed out of the driveway. That’s when the man spotted Decker standing there watching the house.

He rolled down his window. “Can I help you, buddy?”

Decker studied him more closely. “You must be Henderson.”

The man eyed him suspiciously. “How do you know that?”

“A friend told me.” He pointed at the house. “I used to live there a few years ago.”

Henderson ran his gaze over Decker. “Okay. Did you leave something behind?”

“No, I, uh…” Decker’s voice trailed off, and he looked confused.

Henderson said, “Look, don’t get me wrong, but it’s a little odd that you’re standing out here this early in the morning watching my house.”

Decker pulled his FBI creds out of his pocket and showed them to Henderson. “My friend on the police force told me you’d bought the house.”

Henderson nodded and looked anxious. “I heard about—” He snatched a glance at his daughter, who was paying close attention to this exchange.

“Right. Anyway, have a good day. Hope you enjoy the house and the neighborhood. Nice place to raise a family.”

Decker turned and walked off as Henderson drove away.

It had been stupid coming back here. He’d rattled the guy unnecessarily. And for what? He didn’t need to come here for a walk down memory lane. It was all in his head. Pristine. Forever.

He retraced his steps and got to the hotel where he and Jamison were staying in time to see her exit the elevator and walk into the lobby.

“Christ, Decker, are you just getting in?” she said, eyeing his grungy, wet clothes.

“Good morning to you too. Would you like to get some breakfast?”

She followed him into the dining area off the lobby. They sat, ordered some food, and sipped their coffees.

“So?” said Jamison. “Was Susan Richards any help?”

“She didn’t cop to the murder if that’s what you’re asking. She doesn’t have a solid alibi. She was home asleep, she says.”

“We may be able to tighten the parameters on that by talking to her neighbors. But I don’t think she’s good for it. She says she didn’t even know he was back in town. And that seems perfectly logical.”

“Unless she saw him on the street.”

“I saw him and didn’t recognize him,” said Decker. “And I spent a lot of time with the guy all those years ago.”

“Have you called Bogart and gotten his permission to work on this?”

At that moment their food arrived. Decker said, “I’ll fill you in later.”

“I’m thinking that there’s a killer walking around town this morning thinking he or she got away with murder, and it’s really pissing me off.”

“Thank you for ordering a veggie omelet, by the way,” said Jamison. “And avoiding the bacon.”

“You must be growing on me.”

“That’s a stretch, but thanks.”

He put his knife and fork down and finished his coffee.

“What are you thinking?” asked Jamison.

“I’m thinking that there’s a killer walking around town this morning thinking he or she got away with murder, and it’s really pissing me off.”

He looked at her curiously. “Isn’t that enough?”

“I mean, do you feel guilty about what happened to Meryl Hawkins?”

“I didn’t pull the trigger on the guy. I didn’t ask him to come here and ignite this case again.”

“But you think that the fact that someone killed him is evidence that he might have been innocent? I mean, you basically said that earlier.”

“Meaning that I made a mistake?” said Decker slowly.

“I wouldn’t look at it that way. You investigated the case and all the evidence pointed to that guy. I would have seen it the same way.”

“Regardless, if he was innocent, I have to make it right.”

Jamison hiked her eyebrows. “Because the weight of the world’s problems always falls on your admittedly broad shoulders?”

“Not the weight of the world. The weight of one case that I handled. Responsibility comes with the territory. My actions took a guy’s freedom away.”

“No, I’d say his actions took his freedom away.”

“Only if he did it,” countered Decker. “If he didn’t commit the crimes, it’s a whole other ball game.”

Jamison fingered her coffee cup. “If he was set up, whoever did it knew what they were doing. Who would have a beef against the guy that badly?”

Decker nodded. “Good point. And I have no idea. Hawkins was a skilled machinist but lost his job when the factory he worked at had layoffs. Then he went on the odd-job road. Doing what he could to make ends meet.”

He eyed the FBI badge that was clipped to her lapel. “How does it feel?”

She looked down at the badge and smiled. “Pretty damn good, actually. Did you ever think of taking the plunge?”

“I’m too old now. Age thirty-seven is the cutoff and I’m not a military veteran, so I can’t seek that waiver. And even if I could still apply, I doubt I’d pass the physical.”

“Don’t underestimate yourself. And since you know the requirements, I take it you looked into it?”

Decker shrugged. “I can do my job without the federal badge. I’m still a sworn police officer. I can arrest people.” He paused and added, “And you always have my back.”

“I went by my old house early this morning.”

She looked startled by this admission. “Why?”

“I don’t know. My feet pointed that way and suddenly I was there. Met the dad who lives there and saw his little girl. Lancaster had told me about them. I spooked them a little showing up like that, but the dad had heard about what had happened. . . there. It turned out okay.”

Jamison leaned forward. “I know that you don’t want to hear this, Decker, but I’m going to say it anyway.” She paused, seeming to choose her words with great care. “At some point, you’re going to have to let this go. I mean, I get coming back here to visit their graves and all. But you have your life left to live. That means you
have to move forward and stop dwelling in the past so much. Cassie and Molly wouldn’t want you to do that, you know that.”

“Do I?” said Decker abruptly.

“They shouldn’t be dead, Alex. If anyone should be dead, it should be me.”

“But you’re not. You’re alive and you have to spend every day living for them and yourself. Otherwise, it’s all wasted.”

Decker rose. “I’m going to take a shower and change my clothes. And then we’re going to go catch a killer. I’ll meet you back down here in half an hour.”

“Decker, you need to get some sleep!”

“No, that would just be wasting time, wouldn’t it?”

As he walked off, Jamison just stared after him, the look on her face one of heartbreak.

From REDEMPTION. Used with the permission of the publisher, Grand Central Publishing. Copyright © 2019 by David Baldacci. 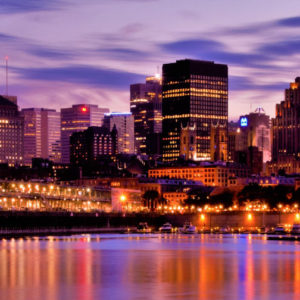 Québécois Noir: Crime and the City Montreal Montreal: all Québécois charm, snow and decent healthcare? Well, yes, but there’s also the underbelly, or should we say the monde...
© LitHub
Back to top