Down the Mean Streets of Post-Nazi Germany...

The world of mystery fiction can only lament the extinguished flame of one of its most outstanding practitioners with the sudden death of Philip Kerr, who died on Friday at the age of sixty-two.

In 1989, a young British journalist performed a magic trick. Though born in Edinburgh and living in London, Kerr wrote the nearest pastiche to Raymond Chandler’s quintessentially American literary style yet achieved, transcending the scores—no, hundreds—who had attempted it before he did.

Even more remarkably, the setting was Nazi Germany in 1936, not exactly the place one would expect to read about a wise-cracking, self-deprecating private eye. Bernie Gunther made his debut in March Violets (1989). Drawn into a case while still drunk from a wedding reception, he walked into a rich man’s mansion when the butler attempted to take his hat. “I’ll hang on to it, if you don’t mind,” he said. “It’ll help to keep my hands off the silver.”

“March violets,” by the way, is the derisive term by which long-time Nazis referred to new party converts. With the Munich Olympics as a backdrop, Gunther, a former member of Kripo, the German criminal police force, investigated a murder that led him to the hierarchy of the Nazi party.

In The Pale Criminal (1990), Germany held its collective breath awaiting the results of the 1938 Munich conference and whether Hitler would draw the nation into all-out war. The third volume of the Gunther trilogy, A German Requiem (1991), is set in the dark aftermath of the war. Stuck in the Russian sector of divided Berlin, he was only too happy to take an assignment in beautiful, peaceful Vienna, where a former Kripo colleague had been accused of killing an American Nazi-hunter.

All three books were collected in Berlin Noir, an essential volume for any aficionado of distinguished crime fiction. It didn’t offer a new exploit for Gunther when it was issued in 1994, but it seemed the best one could hope for, as Mr. Kerr had abandoned Berlin and his hero, writing more contemporary books in search of a wider audience. The results were mixed.

Then—oh frabjus day!—the first new Gunther novel in fifteen years was published in 2006 when The One from the Other heralded the fact that he was back, working in post-Nazi Munich, where there was plenty of work for a private investigator: finding missing people while helping others disappear. Former war criminals were eager to escape prosecution and Gunther knew how to get them out of the country. It may have disgusted him, but it enhanced his meager bank account.

Although there had been a long fifteen-year-gap in Gunther’s literary career, Mr. Kerr hadn’t forgotten how Chandler wrote, nor how he was able to fill those rather large shoes himself.

Adolph Eichmann made an appearance in that comeback novel and was brought to life in a single paragraph. “Eichmann pulled a face,” Mr. Kerr writes, “which wasn’t difficult. His normal expression was a sort of grimace and his mouth was usually a cynical rictus. Whenever he looked at me I thought he was going to tell me he didn’t like my tie.”

Another character was distinguished by having teeth that “were big and yellow, as if he usually ate grass for dinner.”

Even Mr. Kerr’s cheap humor was, well, humorous. When a pretty girl fluttered her eyelashes at him, Gunther assumed it was “the new suit I had bought at Oberpollinger. It fit me like a glove.” But the suit worn by the girl’s boss was better. “It fit him like a suit.”

There have been seven more Bernie Gunther novels, ending (presumably) with Greeks Bearing Gifts, which is officially scheduled to be published next week. When his comeback novel had better sales than the early books had enjoyed, Mr. Kerr wasn’t tempted to abandon Bernie Gunther again and he produced almost one a year, even while continuing to write stand-alone crime novels as well as a series of children’s books as P.B. Kerr.

He did a reading and autographing event at my bookshop last year where he proved to be a riveting speaker and a most congenial guest. Everyone left with a book and the happy memory of having spent the evening with an impressively intelligent and charming gentleman.

What a tragedy that we will never have that opportunity again. 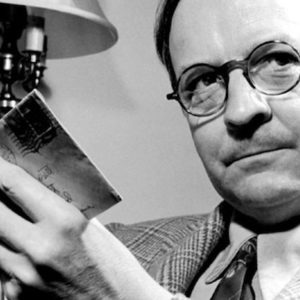