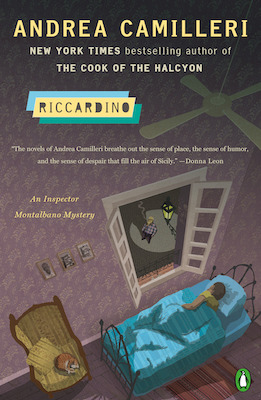 The following is an exclusive excerpt from Riccardino, the 28th and last installment of Andrea Camilleri's iconic and transporting Inspector Montalbano series, skillfully translated by Stephen Sarterelli. In the following passage, the inspector arrives at a murder scene, only to find that corpse is Riccardino—the same Riccardino who began the novel by calling a wrong number and reaching Montalbano.

By dint of yelling and cursing and blasting his horn until his ears rang, he managed to carve a path through a crowd of fifty or so people who’d come running to the scene like flies to shit and were now blocking the entrance to Via Rosolino Pilo to anyone, like him, coming from Via Nino Bixio. The root cause of the blockage was a police car parked across the width of the entrance to the street, with beat cops Inzolia and Verdicchio—known on the force as “the table wines”— presiding over the scene. At the far end of the street, which gave onto Via Tukory, the “wild beasts”—that is, beat cops Lupo and Leone—were also standing guard. The police force’s “chicken coop,” on the other hand—that is, Gallo and Galluzzo—were in the middle of the street with Fazio. Also visible in the middle of the street was a body lying on the ground. Not far away were three men leaning against a lowered metal shutter.

From windows, balconies, and terraces, old and young, women and men, toddlers, dogs, and cats looked down, leaning so far out they risked crashing to the pavement, all in hopes of getting a better view of what was happening. And amidst it all, a din of voices, calling, laughing, crying, praying, yelling, a great cacophony just like at the Festa di San Calò. And, as at the festa, there were people snapping photos and others filming the scene with those tiny little cell phones that nowadays even newborns know how to use.

The inspector pulled up to the sidewalk and got out of the car.

At once a lively dialogue started up over his head. “Look! Look! It’s the inspector!”

“Who? Montalbano? The one from TV?”

Montalbano suddenly felt extremely agitated. Some years back he’d had the brilliant idea to tell a local writer the story of a case he’d conducted, and the guy had immediately spun it into a novel. Since hardly anyone reads anymore in Italy, nothing came of it. And so, being unable to say no to that tremendous pain-in-the-ass of a man, he’d gone ahead and told him about a second case, and then a third and a fourth, which the author then wrote up in his way, using an invented language and working from his imagination. And these novels, go figure, had become the biggest sellers in Italy and were even translated abroad. And then the stories made it onto TV and enjoyed extraordinary success. And as of that moment the music changed. Now everyone recognized Inspector Montalbano and knew who he was, but only as a fictional character on television. It was an unbearable pain in the ass, something that could have come out of a play by another local author, a certain Pirandello.

At least the actor who played him was excellent. He didn’t look the least bit like him, and on top of everything else was a good ten years younger (the bastard!). Otherwise it would have been too much, and Montalbano wouldn’t have been able to walk down the street without being stopped every two steps for an autograph.

“Can’t we do something to make these people stop ogling and enjoying the show? Even crows have more decency!”

“What are we supposed to do, Chief? Fire our guns in the air?”

“And who are those guys?” Montalbano asked, gesturing with his head towards the three men sticking close to the metal shutter.

“Friends of the victim. They were with him when it happened.”

Montalbano looked at them. All in their thirties, all with crew cuts, all in gray sweatsuits, all rather athletic, and all with sunbaked faces. At the moment, however, their sporting air had dispelled, giving way to a kind of mannequin-like stiffness, probably due to fear and shock. Something occurred to the inspector.

“Are they maybe military men?” he asked, hoping.

If they turned out to be soldiers in civvies, he could bow out at once and pass the case on to the carabinieri . . .

The dead man was dressed the same way, except that the front part of his sweatshirt had dark streaks and stains from the blood he’d lost, which had formed a puddle on the pavement. His face was gone, blotted out. And in his right hand was a cell phone.

Only then did Montalbano, looking around, notice that there was a sign on the closed shutter. It read: bar aurora.

He felt strangely certain—with a certainty as absolute as it was inexplicable—that the poor bastard who was shot was the same person who had called him on the phone before dawn by dialing a wrong number.

He walked over to the three men, who were huddling closely together as though cold.

“I’m Inspector Montalbano, police. What was the dead man’s name?”

The three athletes were as though asleep on their feet, the pupils in their saucer eyes spinning round and round and up and down like marbles, and surely not seeing anything. They didn’t move, didn’t answer, and couldn’t bring the person standing before them into focus.

“What was his name?” Montalbano repeated, patiently.

At last one of them, clearly making an effort, managed to bring his eyes to a halt on the inspector.

It was as if he’d said a magic word, as if he’d plugged in the cable feeding energy to the three.

Losing at once their spellbound immobility, they regained color, heat, feeling, life, and the power of speech.

“Did you know him?” asked, lips trembling, the man who’d been the first to speak.

A second man started speaking in a low voice, almost as if praying: “Riccardino, my God, Riccardino . . .”

The third man said nothing, but started weeping silently, his face in his hands.

A ray of sun, as sudden and sharp as a spotlight, lit up the inspector and the three athletes. Montalbano raised his head. The clouds had opened an eye; the morning gloom was dispelling. Riccardino had been right: It was going to be a beautiful day. Just not for him. But none of it mattered anymore in the least.

“What are they doing?”

It was the people who lived in the same building as the Bar Aurora. Unable to see what the inspector was doing, since he was directly below them, they were asking the people in the building across the street to fill them in.

“The inspector’s talkin’ to tree guys.”

“You can’t hear nuttin’ from up here.”

“But can’t this isspector talk a li’l louder like he does on TV?”

“Audio!” commanded some asshole from a window.

“We wanna hear!” protested another.

They were acting as if they were watching TV, and so they wanted to enjoy full audio and video, as if they’d paid for a cable subscription.

Montalbano’s cahonies went into such a vertiginous spin that he was afraid he would achieve liftoff at any moment. Fazio, who knew him inside and out, came over to him, feeling worried. The inspector made a snap decision.

“Fazio, please take these three gentlemen to the station.”

“But when the prosecutor gets here—”

“When the prosecutor gets here you’ll give him my sincere regards.” Then, to the three men: “Come with me. We can’t really talk around here.”

As they were walking towards the car, the overhead dialogue turned into a chorus of joy. 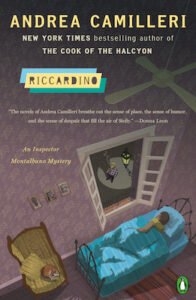 Credit line: From Riccardino by Andrea Camilleri, to be published by Penguin Books, an imprint of Penguin Publishing Group, a division of Penguin Random House, LLC. Copyright © 2020 by Sellerio Editore. Translation copyright © 2021 by Stephen Sartarelli.

Finding the Mystery in Epic Fantasy 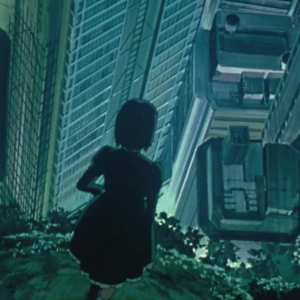 Why Noir and Science Fiction Are Still a Perfect Pairing We live in age of “genre-bending” books. Every other novel of the shelf seems to offer up some new combination: coming-of-age...
© LitHub
Back to top