On finally feeling accepted despite social difference, in the unlikeliest of places

When I was thirteen years old, I read “Rosemary’s Baby” and became interested in witchcraft. Before Goth was even a thing, I dressed in black from head-to-toe and wore blood-red lipstick. My transformation didn’t go unnoticed at school. The popular girls called me a freak, and a boy I’d had a crush on put a thumbtack on my chair.

But that only made me more interested in witches. I read The Crucible and The House of Seven Gables and proposed a family trip to Witch City. My parents agreed.

Our station wagon was a land yacht with plenty of leg room. In the back seat, my sisters and I fought about everything. Our fights were loud. In the front seat, my parents argued about mysterious things I didn’t understand. Their fights were whispered affairs, punctuated by long stretches of silence. My mother’s lips would tighten like a seam, and her eyes would grow glassy. She was like a helium balloon blown to the bursting point. Only she never burst.

This tension fueled our family trips, along with a large thermos of coffee. We’d stop at Denny’s, and while my sisters and I used the restrooms, my father would ask the waitress to refill the thermos and my mother would sneak a cigarette. Then us three kids would race across the parking lot back to the car, jostling and bickering, while dad settled in behind the wheel and mom buckled her seat belt. She’d pour him a cup of coffee from the thermos, and their hands would touch briefly, an uneasy truce having been declared in our absence.

We drove for hours through strange cities, past boarded-up warehouses and over train tracks. I loved these ghostly, once-bright places.

My father always did the speed limit, and sometimes other drivers would pass us, shouting obscenities and leaving us in the dust. Dad slouched behind the wheel, tall and handsome with undisciplined hair—but there was something slightly manic crawling behind his eyes. Because of those eyes, he could never blend in and disappear the way other people could. My father stood out like a sore thumb.

“It’s okay to be different,” he told me once.

But I knew that wasn’t true, because I was different, and it wasn’t okay.

I hated junior high. The eighth grade was torture. My handful of friends and I were outsiders. We struggled to fit in. I wanted to find a place where I belonged. In my heart of hearts, I was hoping that place would be Witch City.

We arrived in Salem, Massachusetts around ten in the morning. There wasn’t a cloud in the sky. I immediately fell in love with the ancient cemeteries, the Victorian storefronts and merchants dressed up like monsters. A police car drove past with a witch riding a broomstick painted on the door. I kicked up the orange leaves with my jet-black boots, wishing that I lived here.

It was early November, but Halloween appeared to be a year round event. Rubber bats dangled from the ceiling of a magic store called Hocus Pocus. They had shrunken heads and Tarot cards, witch hats and Ouija boards. I bought some wearable vampire fangs.

At the Dairy Witch ice cream shop, a female ghoul served us our cones.

She smiled and said with a British accent, “It’s hellish.”

I knew she was joking, but I went around town wearing my vampire fangs saying, “It’s hellish,” in a fake British accent.

The Witch Museum looked like a haunted castle. The ticket-taker was dressed up like Hester Prynne from Nathaniel Hawthorne’s novel, The Scarlet Letter. The main event was a reenactment of the Witch Trials that took place in 1692. We sat inside a small spooky auditorium. Dozens of wax mannequins were staged in groups all around us, each representing a significant moment in that dark time of Salem’s history. A shiver shot through me as the house lights dimmed, a spotlight shone on two little Puritan girls, and a prerecorded voice came out of a loudspeaker.

In 1691, Betty Parris and Abigail Williams claimed to be tormented by witches. One day, the girls started to bark like dogs during one of their father’s sermons, and in the weeks that followed, they convulsed and writhed on the floor, foaming at the mouth, and shrieked at their parents, allegedly tortured day and night by invisible demons who bit them, pinched them and hit them with invisible sticks. The girls blamed three villagers for their ‘affliction by witchcraft,’ three poor women who weren’t in any position to defend themselves—a Caribbean servant girl, a skinny beggar and an elderly neighbor, all of whom insisted they were innocent.

It was nearly impossible to prove you weren’t a witch.

If you confessed, you were a witch.

If you denied it, you were still a witch.

And furthermore, the Bible instructed, “Thou shalt not suffer a witch to live.”

Based on mass hysteria, 19 innocent citizens were executed in 1692.

Fourteen were woman, and five were men.

The youngest to be accused was five, and the oldest was 80.

All were blameless and sinless.

When the museum show was over, I came outside blinking in the sunshine. The town was a murderer. The town had murdered witches. Maybe I didn’t want to live here after all?

Brittle leaves crunched underfoot as we walked through a historic graveyard where some of the judges from the witch trials were buried. There were winged skull-and-crossbones and weed-choked angels hovering above old names obscured by moss.

Later that afternoon, we found Gallows Hill, and I stood in the spot where the witches were hanged 300 years ago. It was a small rocky promontory overlooking a Walgreen’s pharmacy. Such an ordinary place. Rays of setting sun slanted through the conifers and birches, casting dying shadows across the pine-needled ground. Bridget Bishop was the first to go. A ladder was kicked out from under her as she cried out. I imagined her neck snapping and almost burst into tears.

Where the witches were buried was anybody’s guess. Puritan belief didn’t allow them to be laid to rest on consecrated ground. Some say they were tossed in a shallow pit near the site, but the official location remains unknown to this day.

Who can forgive such ugliness?

Who can forgive the murder of innocents?

I was angry and confused. “So they killed nineteen people, and then they just forgave each other?” I asked my father.

“Forgiveness is a complex choice that evolves over time,” he said.

His answer didn’t satisfy me. How could you live in a town full of unresolved grudges going back hundreds of years? How did you forgive your neighbors for killing you?

There were more sites to see—Phillips House, Witch House, the Nautical Museum. All the townspeople I met that day were friendly and kind. They patiently explained their history to us with all its nuances. “We celebrate witches now,” a woman in a colonial dress said. “And try to warn others what can happen when mob mentality takes over. Evil won in 1692, but we’ve since admitted our guilt and honored the dead. We serve as an example. It’s part of our heritage.”

Those who got swept up in the hysteria later repented and recanted.

The girls who planted the seeds of suspicion later confessed to making it all up.

Descendants of the condemned received posthumous pardons and apologies. After centuries of speculation, a team of scholars verified the site where 19 people were hanged during the witch trials as Proctor’s Ledge, an area on the lower slop of Gallows Hill. A plaque was put up, commemorating the site.

I figured that this shared suffering was how healing began.

One image stayed with me for a long time afterwards—a town full of good people struggling to overcome their violent past, while their livelihood depended on the exploitative present.

I remember wandering around downtown Salem, surprised by its rampant commercialism. One image stayed with me for a long time afterwards—a town full of good people struggling to overcome their violent past, while their livelihood depended on the exploitative present. It was part of the inspiration for my new book, “Trace of Evil.”

By the time we headed back to the car, I was dragging my feet. My stomach felt queasy from too much junk food, but there was a deeper unease I took home with me that day.

As we headed west on I-90, my sisters slept beside me in the back seat and my parents spoke softly up front about their faltering marriage. They thought I was asleep, too. They didn’t think that I was listening, but their discussion disturbed me deeply. I was worried about us. I feared for us.

My father heaved a sigh of resignation, flipped on the radio and searched for that smoky jazz station he loved so much. My mother kept her window open a crack so she could flick her cigarette ashes. I watched her tie her flowered kerchief around her head to keep the breeze from blowing her long hair across her face. I watched as she reached for my father’s hand on the wheel, and their fingers intertwined briefly.

I was greatly comforted by this.

Maybe that was how the people of Salem forgave each other—one small gesture at a time.

Alice Blanchard is an award-winning author. She has received a PEN Award, a New Letters Literary Award, a Centrum Artists-in-Residence Fellowship, and a Katherine Anne Porter Prize for Fiction. Her debut novel, Darkness Peering, was a New York Times' Notable Book and a Barnes & Noble Best Mystery book. Her work has been published in 17 countries. Her latest novel, The Wicked Hour, is now available from Minotaur Books.

The Best Live Episodes of Your Favorite True Crime Podcasts 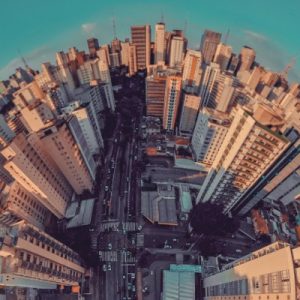 It is undeniable that one of the great cornerstones of the mystery genre is the creation of a series—the process whereby...
© LitHub
Back to top