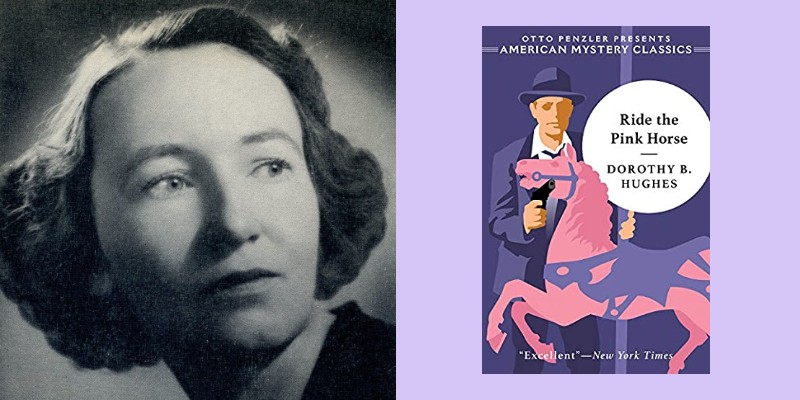 “He hadn’t wanted to come here. He’d wanted it less and less as the bus traveled further across the wasteland; miles of nothing, just land, empty land. Land that didn’t get anywhere except into more land, and always against the sky the unmoving barrier of mountains. It was like moving into a trap.”

The man we know only as Sailor has arrived in Santa Fe at an inauspicious moment: it’s Fiesta weekend. Sailor is a Chicago gangster, single-mindedly hunting his former patron, a U.S. Senator named Douglass: he believes Douglass has cheated him out of a substantial amount of money. So single-minded is Sailor’s pursuit that he didn’t learn about Fiesta before he got on the bus in Chicago. He didn’t know the hotels would be fully booked, didn’t know that he’d end up sleeping on the ground next to a hand-cranked Merry-Go-Round, unable to bathe or shave or change his clothes.

Sailor is out of his depth as soon as he gets off the bus. He’s angry to find himself in “a dump” of a town. He compares everything he sees to its superior Chicago counterpart. Yet in this dump, his usual sense of direction deserts him as he tries to navigate streets packed with Fiesta-goers.

Dorothy Hughes is often described as an avatar of noir. Sarah Weinman calls her “the world’s finest female noir writer.” If noir, in Megan Abbott’s words, is a world where “everyone is fallen [and] right and wrong are not clearly defined, [perhaps] not even attainable,” then Hughes belongs there. Sort of.

Her people do know the difference between right and wrong, and some are able to choose right, including Dr. Hugh Densmore, hero of Hughes’s final novel, The Expendable Man (1963). Sailor, in contrast, has a cynical lack of belief in a morally good life. He longs for a “clean girl,” meaning not one free of venereal disease, but instead one free of the corruption that fills his own world.

Like her younger contemporary, Dorothy Salisbury Davis, Hughes finds evil more beguiling to explore than good, and her exploration is rich in detail, all culled from Sailor’s third-person interior monologue.

Sailor is a product of Chicago’s Irish-Catholic slums. He prides himself on having left the grime and cruelty of his childhood behind. As the novel unspools, events around him force him to remember his mother’s efforts to provide for the family—as a washer-woman—while his drunken father beat up her and the children.

Sailor is constantly trying to assure himself that he doesn’t behave like his old man. “He wasn’t any bum,” he keeps saying: he knows how to dress—the best-dressed man on the senator’s staff—he’d been to college for a year and a half, but the dirt that encrusts him throughout the book degrades his sense of self. He has wants/needs that can be met only through the senator’s money. He’s sure that as soon as he’s paid, all will be well.

Ride the Pink Horse is claustrophobic. The action is contained within the small downtown of 1947 Santa Fe, where Sailor feels hemmed in by the surrounding mountains. He’s hemmed in, too, by a small cast of characters who keep showing up despite the large crowds. Don José, who owns the hand-cranked merry-go-round; an Indian girl named Pila in town with her Hispanic cousins; and MacIntyre, “Mac,” a Chicago cop who’s been part of Sailor’s life since he first busted Sailor for stealing cars.

Along with Don José, Mac offers the novel’s moral counterpoint to Sailor. He comes from the same slums as Sailor, with the same abused childhood. For all the years he’s known Sailor, he’s hoped that he can bring a latent sense of decency in him into life.

Hughes shows us signs of the moral core Mac has occasionally glimpsed in Sailor. For instance, troubled by the possibility that the Indian girl, Pila, will follow her Hispanic cousins into a life of quasi-prostitution, Sailor gives her some of his dwindling money—along with a lecture to go back to her pueblo and leave the bright lights of Santa Fe behind. And as his physical condition deteriorates, he develops a reluctant empathy for the Indians and the Hispanics whom he initially denigrates as “spics.” He can’t quite admit that he’s as much an outsider as they are, but he is inhabiting their same shadowy world on the fringes of the money and power he yearns for.

Don José is respected by all the Santa Feans who live outside the world of white, moneyed incomers, but Sailor will call him only Pancho Villa because of a superficial physical resemblance to the outlaw. Even when Don José gives him a place to sleep, gets him medical care when he’s wounded, and worries over his emotional state, Sailor cannot rise above Pancho Villa in his mind.

The racism Hughes observed in the Southwest is a theme of Pink Horse, as it is of most of her later novels. As Hughes grappled with the nature of evil, she created villains out of the white moneyed people who displaced the Spaniards and the Indians. In Pink Horse, Don José is a good, moral man—despite his alcohol consumption, which reminds Sailor of his own brutal father. Don José also tries to educate Sailor on the history of race in the southwest.

Those passages are a bit flat, didactic, but they stand in contrast to the stereotyping prevalent in most mid-twentieth century crime fiction, including Chandler, where Black characters are woolly-headed, or shines, or monkeys, prone to rolling their eyes in terror when danger threatens. In fact, in The Expendable Man, the central character is a Black medical doctor of high moral character who unwittingly gets sucked into a world of white depravity.

Lawrence J. Oliver, Jr. discusses Hughes and race in “The Dark-Skinned Angels of Dorothy B. Hughes’s Thrillers” (MELUS, Vol. 11, No. 3, Autumn, 1984). He says that a pitfall for white writers who wanted to counteract racist stereotyping was to fall into a different trap—to create one-dimensional stereotypes where people of color are the suffering servants of society. Oliver believes Hughes’s non-white characters are too saintly, too forgiving of the damage done to them. By denying them anger, she deprives them of a full humanity.

This is somewhat true for Ride the Pink Horse, but Don José doesn’t sugarcoat the history of bloodshed between Spaniards and Indians in the early fights over who controlled the Southwest. Don José also tries, for inexplicable reasons, to save Sailor from his hard-driving demons.

The policeman Mac also tries to save Sailor. Near the end of the novel, he offers something close to a Christian sermon on right and wrong, on the possibility of choosing the right path.

Mac said, “I don’t want anything to happen to Senator Douglass. I told you that before. Moreover, I don’t want anything to happen to you.” He took a long drink of beer. “Why I should care about that, I don’t know, Sailor,” he said in that quiet way of his. As if he were wondering about it for the first time. “All these years, every time I’ve tried to give you a hand, to steer you right, I might as well have hollered down a well. I don’t know why I’ve thought you were worth saving. Why I still think so.” . . .

[Sailor walks away, thinking] “Mac was getting preachy again.”

Even more than its concern with race and history in America, Ride the Pink Horse is a novel about good and evil, sign-posted by religious imagery, which come from the Catholic tradition in which Sailor grew up. The processions stir up his bitter memories of childhood services where the priest paid no attention to the domestic sufferings of the women and children in the parish. Sailor’s nervous wandering through Santa Fe in the dark keeps calling those memories back to him. In the penultimate scene where Mac “was getting preachy again,” the cop is depicted as unmistakably Christlike.

Hughes wrote poetry as well as prose, and many of the poems explore the questions both of race and religion which dominate Ride the Pink Horse. Her “Down South” is a powerful meditation on lynching, but the bulk of her poems come out of the New Testament: “Miserere,” “Lullaby from a Stable,” “Golgotha,” “Prodigal.”

There will be no reprieve though

And Life to sullen ash: always the lance

Will pierce his side; always he must toss

Beneath a sleepless sky, and never still

The silence of despair. Though he protests,

His tortured prayer will be to no avail…

These poems are not sentimental, any more than Hughes’s novels are. Hughes lays bare the essential loneliness with which we all wrestle. It’s a loneliness that makes many of us choose the wrong path, in Mac’s language, because that’s where we find companionship and a superficial comfort.

In pure noir, where, as Megan Abbot says, everyone is fallen, characters exist without hope. Hammett’s Red Harvest makes the reader weep from the misery that afflicts everyone in Poisonville. In Ride the Pink Horse, Hughes offers a more nuanced portrait of human suffering. If you step back far enough from it, the whole world looks like Poisonville. Up close, though, small acts of kindness may get the loneliest Chicago gangster through the night. 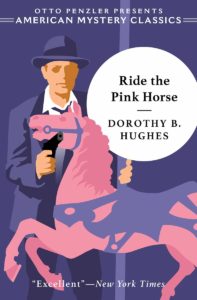 Excerpted from Sara Paretsky’s introduction to Ride the Pink Horse, by Dorothy B. Hughes. Reprinted with permission of the publisher. All rights reserved.

Sara Paretsky is the author of 20 books, including her renowned V. I. Warshawski novels. Her many awards include the Cartier Diamond Dagger Lifetime Achievement Award from the British Crime Writers’ Association and the 2011 Mystery Writers of America’s Grand Master Award. She lives in Chicago, Illinois. 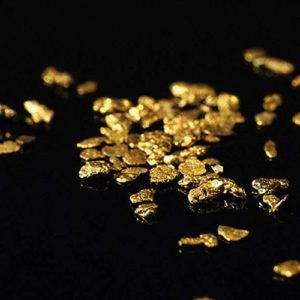 Juan Pablo Granda stepped into a small office in a middle-class neighborhood in the permanently foggy city of Lima, Perú,...
© LitHub
Back to top