Shanghai Noir: How to Write Crime Fiction in a City with a 100% Conviction Rate

From 19th-Century Pirates to 21st-Century Bureacrats

For a city with such a reputation—back in the old days of foreign gunboats, spies and revolutions as well as now in the boom-boom modernity of the skyscraper city—Shanghai hasn’t generated that much crime fiction. Indeed, it has to be said, for a megalopolis of maybe as many as 24-million people it’s a pretty safe place. Novels about Shanghai have preferred to focus on the glitz, the glamour, the style of the city—China’s “capital of cool.” But, of course, there always was, and still remains, an underbelly down beneath the neon lights and the luxury penthouse apartments.

Shanghai has been such a success because it’s a port town at the end of the mighty Yangtze River where it meets the South China Sea, and port towns always have a reputation. And perhaps Shanghai’s modern origins are deeply entwined with crime? In the mid-19th century the British grabbed Shanghai after the First Opium War, declaring it a “treaty port,” throwing it open to any and all buccaneers and capitalist freebooters to moor up alongside the opium hulks on the Huangpu River as they fought to preserve the opium trade—perhaps the most pernicious of modern trade wars.

Shanghai’s attraction to a multinational bunch of ne’er-do-wells, pirates and gunrunners attracted thriller and crime writers early on. Francis Van Wyck Mason’s The Shanghai Bund Murders (1933) is full of warlords, gunrunners and damsels in distress. Mason, a Bostonian novelist, had a long and prolific career spanning 50 years and 65 novels mostly featuring his proto-James Bond character Captain Hugh North, a detective in America’s G-2 Army Intelligence. This was his seventh in the Hugh North series and he eventually ends up solving the Shanghai Bund murders and nailing the western gunrunning baddies who were clearly based on the many westerners running guns along the China coast at the time.

There were plenty of bad crime novels set in Shanghai published between the wars, endless pulps and swiftly produced Shilling Shockers with plenty of Yellow Peril. L. Ron Hubbard, who’d passed through Shanghai briefly in the late 1920s, was responsible for quite a few Shanghai pulps—Spy Killer, Red Dragon, Trail of the Red Diamonds and Falcon Killer, among them. Fun (some of them), but of no great literary merit I’m afraid. So it might be worth a little genre bending to include a couple of books that weren’t strictly crime novels, but had overtones of criminality. Riichi Yokomitsu’s Shanghai (1928) is hard to find these days but Riichi, a pioneer of Modernist literature in Japan and a key member of the so-called “New Sensationalist” school (though his politics veered rather towards Japanese nationalism), spent time in Shanghai. His novel is dark with noir-ish overtones as his characters move through a waterfront world of late night cafés, prostitutes, pimps, madams, underground revolutionaries and con men. Andre Malraux’s La Condition Humaine (Man’s Fate, 1933) is certainly a thriller and centers on a group of revolutionaries involved in stoking revolt and terrorism. Malraux was a bit of a cheat and (despite always hedging the issue in interviews) almost certainly never actually visited Shanghai. Yet to those who have researched the city’s history the novel, about the bloody and failed communist uprising in Shanghai in 1927, rings true, while no lesser a famous Shanghailander and contemporary of Malraux’s Emily Hahn reviewed the book favorably declaring, “Fiery and sincere, it is very convincing in spirit. Mr. Malraux may not have known much of Shanghai, and many of the details are wrong, but these are of no importance.”

Many contemporary writers have found old Shanghai a honeypot of inspiration they can’t keep away from. Kazuo Ishiguro’s When We Were Orphans (2000) saw a Shanghai-born English detective in the 1930s return to the city to try to solve the one crime that has always eluded him—the unexplained disappearance of his parents. He pursues the threads of their lives as the war clouds gather over the Yangtze. Ishiguro was to return to Shanghai with the screenplay for the Merchant-Ivory movie The White Countess (2005) with Ralph Fiennes as a blind American diplomat and Natasha Richardson as a taxi-dancing White Russian émigré trapped in the city as political turmoil tears it apart. Cases involving mysterious and beautiful Russian émigrés in Shanghai have long been popular; the pulp magazines of the 1930s and 40s regularly featured them in Shanghai waterfront bars and nightclubs. Tom Bradby’s The Master of Rain (2003) is a fantastic evocation of 1926 Shanghai with a British officer in the Shanghai Municipal Police trying to solve the horrific murder of a young White Russian woman.

MJ Lee has continued the tradition of highlighting the Russian émigrés of old Shanghai with his Inspector Danilov series, also set in the 1920s. Danilov, a former Tsarist Russian policeman forced into exile after the Bolshevik Revolution and now a member of the Shanghai police has become a series of three books: Death in Shanghai (2015), City of Shadows (2016) and just recently The Murder Game (2017). Dead Russian beauties, murdered families, corrupt police officers, gruesome and seemingly ritualistic murders—all in a day’s work for Danilov.

But we can’t wallow in the nostalgia of old Shanghai constantly—there’s the underbelly of modern Shanghai, communist Shanghai (though with luxury stores, millionaires and Ferraris) to consider. The British policemen and Russian émigré cabaret dancers may have departed but we have new, and equally fascinating characters. The undisputed king of Shanghai crime for over a decade now has been Qiu Xiaolong. Qiu has now written nine novels featuring his character Inspector Chen of the Shanghai Police. Chen, who happens to be a rather good poet too, must deal with the communist bureaucracy, Party corruption, businessmen and their mistresses who are supposedly “untouchable,” the crimes of a very capitalist city still run by a very authoritarian government. It’s a fascinating balancing act. And therein lies the dilemma of Shanghai crime writing—Qiu Xialong, though Shanghainese by birth, has written his novels that closely detail the city in the go-go 1990s and early 2000s from his home in St. Louis where he is an academic specializing in translating T.S. Eliot into Chinese.

Inspector Chen has been published in China—the strange case of a Chinese author writing crime novels in English from an American campus that are translated into Chinese. However, there’s been some censoring of the more obvious allusions to corruption among the communist party’s higher echelons while throughout Shanghai is simply referred to as “City H.” It’s a silly sort of censorship—anyone Chinese, or who has visited the city for an afternoon, would immediately recognize Inspector Chen’s Shanghai—the majestic sweep of the colonial Bund, the rising cluster of skyscrapers across the Huangpu River in Pudong opposite, the narrow alleyways of the city’s traditional shikumen housing and lilong lanes.

Chen is an honest policeman working in a corrupt and repressive atmosphere. There are shades of Martin Cruz Smith’s Soviet detective Arkady Renko and, just as Renko is above all else Muscovite through and through so Chen is a proud Shanghainese. But Shanghai is changing—as he investigates so skyscrapers shoot up around him, migrant workers pour into the city, demolition clears away whole streets he knew as a child, the old certainties of at least a job and a home of the late Maoist days fall away to be replaced by the rapaciousness of the market. Temptation—money, sex, power—are everywhere and Chen must navigate all the potential pitfalls of the new China of the 1990s.

There are, of course, still tensions in Shanghai. There are problems. The underbelly may not so much be criminal in Shanghai (though it certainly exists) but is perhaps more obviously the city’s population of migrant workers—men and women from the countryside who have come to Shanghai to work as shop assistants, waitresses, karaoke hostesses or to put in grueling hours for low wages on construction sites or as taxi drivers whose shifts never seem to end. They are omnipresent and recognizable by their clothes and accents, yet unknown to most Shanghainese. They are another side of the “Chinese Dream,” the contrast to the new billionaires, jet-set rich kids whose fathers run the corporations or the Party and the privileged foreign community.

Diana O’Brien was not a particularly rich or privileged foreigner in Shanghai. In fact she worked really hard, long hours for low pay, living in poor quality apartments with illegal work contracts and dodgy visas. She was one of the hordes of attractive foreign women who become models in China—for a few it can be a route to high wages, a glamorous lifestyle and the cover of multi-million copy selling magazines. For others, as investigative journalist Mara Hvistendahl uncovered in her true crime book And the City Swallowed Them (2014), conditions are terrible and put them at risk. Hvistendahl, who lived for many years in Shanghai, contrasts the fates of O’Brien, a Canadian model horrifically murdered in a stabbing frenzy in a shabby Shanghai apartment in 2008, and Chen Jun, an 18-year-old migrant worker who police believe killed O’Brien in a robbery gone wrong. With China’s official conviction rate for murder cases at 99.9 percent, the only way to have a chance at avoiding the death sentence is to confess. It was no surprise that Chen did. Both had come to Shanghai with big dreams; both were to be horribly disappointed. And the City Swallowed Them (available as a Kindle Single) reviews their lives, the case and what it says about modern Shanghai behind the smoke and mirrors of the city’s frenetic boosterism.

So what of Shanghai crime writing by local Shanghainese? The truth is crime in China is a problematic genre—it all too often raises tricky political issues, when it appears the censors axe falls swiftly; local politicians are powerful and prickly. Crime shows on TV are no better—showing valiant and incorruptible policemen and women in a cardboard cut-out way that would have been laughed at in America in the 1950s! Better then, if you are trying to write crime to create anonymous places that are deniable. It’s a great pity—great and rising cities should have great crime novels written about them—as London did in the Victorian age thanks to Conan Doyle and Wilkie Collins, as Los Angeles did in its formative years thanks to Raymond Chandler and James M. Cain. We can only hope that one day things might loosen up and the crime writers can start scribbling the tales of their city of Shanghai.

My Father's Secret Life As a Cold War Spy 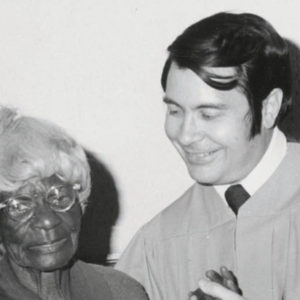 When we talk about Jim Jones we don’t talk about the many years he spent traveling the US and preaching. We talk about...
© LitHub
Back to top