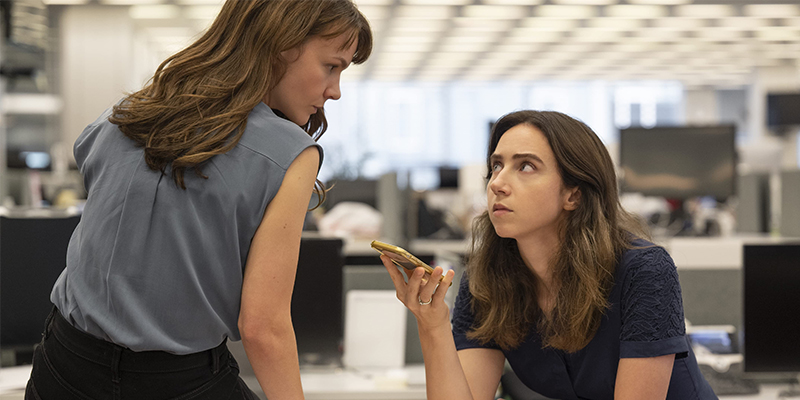 The best journalism movies emphasize dogged research and writerly integrity, with “Truth” clearly framed as the guiding principle and ultimate purpose of such investigations, and “justice” as its primary effect. She Said follows suit, but it also develops a highly personal and empathetic tone—more social and compassionate and intimate, more Spotlight and less All the President’s Men or The Post.

The film, directed by Maria Schrader, is about how two New York Times reporters, Jodi Kantor and Megan Twohey, broke the story about Hollywood producer Harvey Weinstein’s decades-long pattern of abusing and assaulting his female employees and colleagues. Essential to the film’s thesis is that, as high-profile as the setting and the players might be, the circumstances are also clearly cases of workplace harassment—a horrible thing that happens everywhere and can happen to anyone.

We meet investigative reporters Twohey (Carey Mulligan) and Kantor (Zoe Kazan) as experts at writing exposés about exploitation, cover-ups, and abuse. Kantor has written about workplaces like Starbucks and Amazon, while Twohey has recently broken the story about Donald Trump’s longstanding pattern of “unsettling workplace conduct” and inappropriate behavior toward women. The exposé into Fox News pundit Bill O’Reilly’s longstanding pattern of workplace misconduct leads Kantor to look for similar environments. It’s not long before she comes across information about Hollywood producer and Miramax CEO Harvey Weinstein, and, encouraged by her superiors Rebecca Corbett (Patricia Clarkson) and Dean Baquet (Andre Braugher), recruits Twohey to help her look into things.

What they uncover is staggering—more than a pattern, but an entire system of abuse. Most witnesses and victims have been committed to silence via settlements and payoffs, while many others fear retribution. The two journalists look into numerous cases—of Miramax employees, as well as celebrities such as Ashley Judd, Gwyneth Paltrow, and Rose McGowan. If women refused Weinstein, he would end their careers. Judd, playing herself, speaks about her experiences being blacklisted by Weinstein after turning down his insistent advances.

The film, screenwritten by Rebecca Lenkiewicz and based on Kantor and Twohey’s ensuing book about their investigation, is wisely, caringly knit together with a tone of solidarity and solemnity. All of Weinstein’s victims are discussed and portrayed respectfully, and the film wisely never visually represents Weinstein’s actions; no actor pantomimes abuse or being abused. There is not a tinge of sensationalism to be found.

Furthermore, although Kantor and Twohey are not represented as victims of abusers, they are framed as knowing all too well the hardships women bear on a daily basis, let alone when they speak up. They face intimidation by men before and after they start looking into Miramax (especially Twohey, who is threatened with rape and murder by an angry MAGA stranger after she writes the Trump story, and who is caterwauled at by Trump himself). Kantor is followed by a black SUV (likely sent by Weinstein) when she is walking home alone at night. Twohey is hit on by an aggressive man at a bar, who mocks her when she angrily dismisses him. And, outside of work, both women have family struggles: Kantor leads a hectic life as the mother of two little girls, while Twohey is experiencing postpartum depression after the birth of her first child. The film doesn’t draw distinctions between the women who were literally victimized by Weinstein (and Trump) and the women who were not, stressing repeatedly that it is important to all women when a single woman is harmed.

There is not a tinge of sensationalism to be found.

Mulligan gives one of her best performances as Twohey—who might have easily been a stock character, a cool-girl tough-cookie, but is instead a complicated figure dealing with her own, very realistic feelings about family, motherhood, and work. She heals herself a bit by returning to her job, after taking care of her little girl—just one of the many ways the film illuminates how work and “the workplace” should be a safe, healthy space for women to thrive.

Kazan’s performance as Kantor is unfailingly sincere, while Clarkson and Braugher are perfect as two people who absolutely work in a newsroom. (In a cute touch of authenticity, Clarkson wears the kind of bunched, large, beaded necklaces that Corbett seems to wear in life.) But the film’s standout performances are by Jennifer Ehle, Angela Yeoh, and especially Samantha Morton, who play older versions of three of Weinstein’s victims from the 90s—young employees of his made to feel powerless by his treatment of them, whose lives were derailed and almost ruined by his influence. Morton’s scene is riveting—she channels steely determination, moldering heartbreak, raw anger, and quiet devastation in one single conversation—making me wish, yet again, that the Oscars had a category for “small appearances or cameos.”

The film wobbles a bit formally, through no fault of its own but due to its proximity to the events themselves. The Kantor-Twohey story dropped only five years ago, on October 5th, 2017 (and was followed, five days later, by a New Yorker article detailing Ronan Farrow’s investigation into Weinstein). Although Weinstein’s crimes go back decades, the investigation is relatively recent and involves people currently active in Hollywood. As such, the film wears a patina of industry trepidation; participation from the (famous) victims themselves feels hesitant and is somewhat limited. Only Judd appears as herself, while Gwyneth Paltrow appears in voiceover via a phone call, and Rose McGowan appears in voiceover played by an actress (Kelly McQual). Judd (and to an extent Paltrow) performing their own real, past traumas, is an act of unbelievable bravery.

Weinstein appears in the film but is voiced and played by Mike Houston, except in one instance, in a voice recording of Weinstein coming on to real-life model Ambra Battilana Gutierrez, who was wearing a wire and working with the NYPD after Weinstein had assaulted her previously. (Twohey and Kantor were unable to obtain the recording for their own article, but Farrow did. In the film, it provides context more than becoming a piece of evidence.) Donald Trump is voiced by SNL cast member and Donald Trump impersonator James Austin Johnson. Famous actresses like Mulligan, Kazan, Clarkson, Ehle, and Morton play “ordinary people,” not celebrities. Ultimately, this smattering of different kinds of performance and involvement makes the film feel cobbled-together and overly brainstormed at times, overshadowed by the strains of verisimilitude and the personal and legal limits of involved parties.

The film might have been less encumbered by questions of Hollywood support if it had been made more than five years after the events of the investigation—even ten years into the future, when all the characters might have been played by other actors, avoiding questions about representation entirely.

This certainly doesn’t take away from She Said’s constant preoccupation with representing “journalistic ethics.” In an era when reporters are in danger by angry populations of the public they serve, She Said seems determined to reveal the ethical and sympathetic practices that go into working on a story like this. Twohey and Kantor are represented as professionals with clear limits (there is a scene in which Kantor nearly takes questioning too far and dramatically reels herself back in).

The film understands and sympathizes with women who cannot speak out (or even talk to Twohey and Kantor) because they are bound by NDAs or afraid of being retaliated against. And throughout, the New York Times is represented as being an unimpeachable engine of Truth, a bastion of thorough research and fact-checking. The film doesn’t bring in a crumb of suspicion, doubt, or disbelief toward any of its proceedings; it isn’t even really about “finding the truth.” It is about “reporting the truth.”

If it is clearest about anything, it is about how women’s pasts, presents, and futures can be wrested away from them simply at the urges and whims of a powerful man—but also how an excellent way to fight back is through solidarity. The film wants to tell women they are not alone in whatever they are experiencing. In She Said, women listen to one another, fight for each other, and in doing so, help everyone. 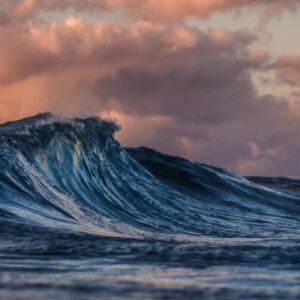 What is it about the sea that has made it a literary obsession since The Odyssey? For me, it’s the mystery, the thrill...
© LitHub
Back to top