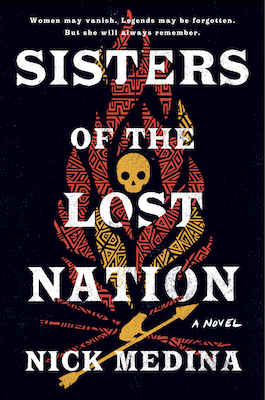 The following is an exclusive excerpt from Sisters of the Lost Nation, by Nick Medina, a high concept thriller set on an indigenous reservation in Louisiana. Passionate about music, travel, and writing, Nick Medina is a college professor in the suburbs of Chicago. Having grown up one block from his paternal grandmother, an elder among the Tunica-Biloxi Tribe of Louisiana, Nick was enthralled by the stories she’d share about her upbringing on the tribe’s reservation. A member of the Tunica-Biloxi Tribe himself, Nick’s forthcoming debut novel, Sisters of the Lost Nation, was inspired by family stories, his experiences visiting the tribe’s reservation, and the ongoing epidemic of missing and murdered indigenous women and girls.

“Do you hear that?” her uncle whispered.

“Hear what?” she said, refraining from taking a big bite of the caramel apple she’d made.

“The rustling. Over there. In the bushes.”

Her ears strained. The fire burning in the pit between their lawn chairs popped, sending up orange embers that failed to alleviate the encompassing darkness. She shook her head and lifted the apple to the corner of her mouth where she still had teeth capable of piercing the hard flesh; adult incisors had yet to fill the holes in her smile.

“Listen,” he hissed, once more stopping her from taking a bite.

“I don’t hear any—” The rustle of leaves sounded from far off in the yard, back where the manicured lawn merged with the untamed field that bordered the house. “Is someone there?” she asked, tongue lisping against her gums.

“Not someone . . . not really,” Her uncle’s spindly body leaned forward, making his leather jacket—black as the night, his feathered hair, and the shiny motorcycle he’d rode in on—creak.

She questioned him with her eyes.

Twinkling in the orange and yellow light, his eyes, usually brown and warm, looked black now too. “About what I found at work a few months ago,” he said.

She grew silent, thinking about where her uncle worked. The cemetery. “What’d you find?”

“Do you really wanna know?” he asked, pulling on the scraggly beard he’d barely been able to grow.

She nodded. She guessed so.

He slowly leaned forward in his chair.

“I found three unearthed graves,” he said. “Someone dug them up.”

“Why would someone do that?”

“I don’t know, but it wasn’t very smart.” He poked the fire with a stick, casting more embers into the autumn air. “A man, a woman, and Hilaire Broussard—the last official chief of our tribe, our nation—were the three dug up. . . . Do you know what becomes of a body after it’s spent years in the ground?”

She didn’t gamble a guess, she just looked toward the house, wishing her parents would come back out. It’d taken them both to wrangle her tantrum throwing three-year-old brother to bed.

“The bodies turn to bone,” he said. “Skeletons. They still look like bodies, only without all the skin.” The flames cast shadows that leapt about his face. “That’s what I expected to see when I looked into the open graves,” he said, “skeletons that resembled bodies, a bone for every head, arm, leg, finger, and tiny toe.” 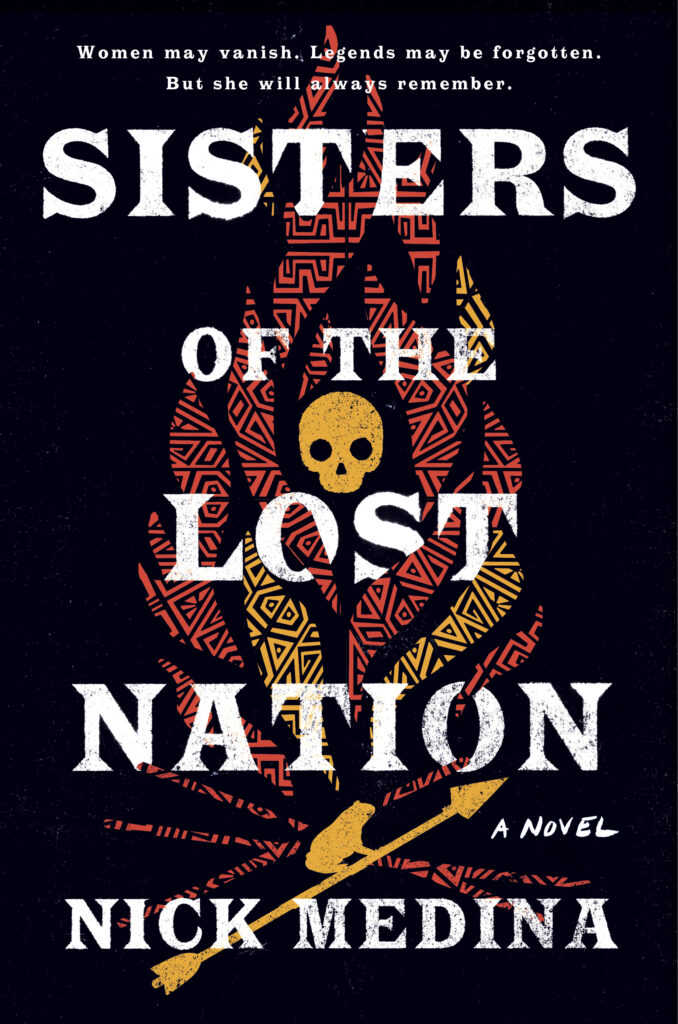 She cast an uncertain gaze at the ground where her little sister sat atop a sleeping bag, legs crisscross applesauce, oblivious to everything their uncle was saying. Her busy tongue licked the caramel from the fruit she wouldn’t eat. It was past her bedtime, but she’d stay up as long as Mom and Dad were busy with their brother; only five, she already knew how to go unnoticed.

“Bones were missing,” their uncle carried on. “Taken.”

The older girl redirected her gaze from her little sister to her uncle, who showed no sign of jest.

“The woman’s fingers were gone,” he said. “Her toes too . . . every little piggy. And the two big bones from her left arm, below the elbow. The man’s skeleton didn’t look like it was missing anything at all, but someone—something—had gnawed on his ribs. There were gashes in the bones. And the chief . . .” He looked her dead in the eyes, “ . . . was without a head.”

She jumped in her seat, causing a glob of warm caramel to drip onto her dress. She wiped it with her free hand, smearing it, getting her fingers sticky.

“The skull was gone, but it wasn’t taken. It, as a matter of fact, took something itself.”

She pulled at the braid hanging along the left side of her face, getting caramel in her hair. “What’d it take?” she asked, wondering how it could take anything at all.

He leaned closer to the fire, inches from the flames.

“A life. More than one. The spirit of a chief, you see, is a powerful thing. The skull became a head again when it was lifted from the grave . . . resurrected.”

“Alive again,” he said, his voice measured and grievously low, prolonging every word. “But not like it was before. Not like the old chief. It’s angry now that it’s been ripped from its rest. And ravenous. Hungry for revenge. It’ll eat anyone it encounters. It’ll tear flesh from bone.”

“It rolls, gathering mud and moss on its decaying flesh.”

The wind blew again, chillier than before.

“But how do you know what it eats?”

“Because it devoured the person who dug it up.” His expression morphed from serious to sad. “And I’m pretty sure it ate Miss Shelby, too.”

A lump formed in her throat when she thought about Miss Shelby, the only adult she’d ever considered a friend. Miss Shelby had gone missing that summer, followed by whispers that she wasn’t coming back. The girl’s eyes prodded her uncle for more even though she wasn’t sure she wanted to hear it.

“There were footprints in the mud leading to the chief’s grave, but none leading away.”

She pondered what that meant, not hearing everything he said. “You swear?” she asked.

“The head is out there and it’s hungrier than ever,” he went on whispering, nodding. He looked to his left, to his right, behind his back. “Spine-chilling is what it is. If you see it, you’ll know what I mean.”

He nodded slowly. “Remember when we went fishing in June?”

“And you remember what the fish looked like when we reeled them in from the water?”

She recalled the catfish her father and uncle had caught for supper. She’d watched with curiosity, which quickly turned to sadness then dismay, as the fish gills gradually stopped gasping at the bottom of the catch bucket, loaded with ice.

“The head has the same eyes as the fish, beady and unblinking, only they’re cloudy and flat, sunken deep into its skull. Its hair grows wild, tangled with beetles, twigs, and burs, and it trails the head like a tail. The flesh itself is rotten and foul, dead as the Heaven and Hell tree, once the tallest old oak on the reservation—it’s branches stretching for the stars, its roots reaching for the abyss below—and as ragged around it’s missing neck as the hem of my jeans.” The chain he wore on his wallet rattled as he lifted a foot over the fire, showing off the frayed cuff of his pantleg, streaked with mud. “The mouth—” He paused, clenching his jaw to steel himself. “—that’s the worst part of it. It can stretch as wide as it wants . . . wide enough to suck you between its wormy lips.” She thought of the catfish again, their mouths gaping and wide, flanked by whiskers that had curled and turned black after her father had hacked off the fish heads and tossed them into the fire he’d stoked to cook the fish bodies. “It’s got a tongue of old leather and teeth like shattered glass, jagged and sharp. If it sees you, it’ll roll after you, which means you’d better run. And fast! Just one nibble on the back of your heel means you’ll never escape.”

“Never?” Her voice barely made it over the crackle of the fire. She thought of Miss Shelby again. Gone forever. “Can’t it be stopped?”

He shrugged. “Can’t kill something that’s already dead. I don’t have any idea how to stop it. All I know is it’s a good thing you’re not out here alone.”

She suddenly had to pee but didn’t want to walk the fifty feet from the firepit to the back door. Never had home seemed so far. Never had she been so afraid in the dark.

The leaves rustled in the yard again, closer than before.

“Better not let it get you,” he said.

She sprang up from her seat and grabbed her little sister by the arm, dragging her to safety. The caramel apple she’d been so eager to eat fell to the ground, a gift to the ants. Abandoned, it rolled through the grass, picking up dirt and bits of black ash

From SISTERS OF THE LOST NATION by Nick Medina, published by Berkley, an imprint of The Penguin Group, a division of Penguin Random House, LLC. Copyright © 2023 by Nick Medina. 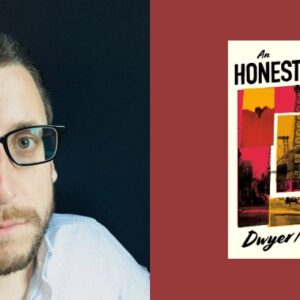 Shop Talk: Dwyer Murphy on Writing Routines, Superstitions, and Reading Elmore Leonard Like a Bible Dwyer Murphy is a man of letters.   Before becoming the editor of CrimeReads, Murphy was a lawyer, a litigator, and an Emerging...
© LitHub
Back to top