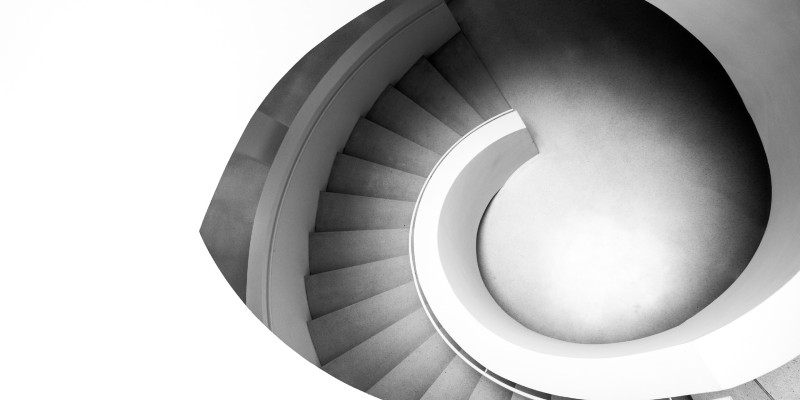 Secretive, questionable, and all around untrustworthy main characters make for unforgettable thrillers.

In seventh grade I was bedridden with the flu for two or three days, and my mother bought me some paperbacks to read while I recovered. One of them was Ice Station Zebra by Alistair MacLean. I was hooked from the first page, where a mysterious narrator named Carpenter, a British doctor, is trying to talk his way onto an American nuclear submarine that is preparing for a rescue mission in the Arctic. Drift Ice Station Zebra, a British meteorological outpost, has suffered a catastrophic fire, leaving the survivors with little shelter or food, and this submarine is the only ship that could possibly reach the men before they perish in the savage winter above the Arctic Circle.

The situation alone was gripping. But what really caught my attention was the narrator. Dr. Carpenter is perceptive, witty, and confident without being arrogant. He’s a likeable narrator. But the U.S. Navy is understandably reluctant to let Carpenter, a British civilian, join the mission. Then Carpenter tells an American admiral that the ice station is actually a listening post for detecting Soviet nuclear missile launches. The admiral is astonished: “I’ve never heard any of this before.” Carpenter follows with this aside to the reader: “I wasn’t surprised. I’d never heard any of it myself either, not until I’d just thought it up a moment ago.”

This short passage shocked me. Suddenly, Carpenter was a sinister figure. What was his agenda? Why was he lying to the U.S. Navy? Why was he letting me know he was lying? It was that last part that really got to me. I liked Carpenter, so I felt complicit in his lying. I had no idea whether Carpenter was a good guy or a villain. This was the first thriller I ever read where the protagonist’s motives were unclear, even suspicious. I had no idea you were allowed to do that as a writer. I had to know what happened. I raced through the book in a day. I still have that paperback copy nearly forty years later.

When it comes to mysteries and thrillers, readers expect surprises and plot twists. But usually the protagonist is a reliable figure in a murky world of secrets and lies. However, when our protagonist turns out to be secretive, or questionable, or even untrustworthy, this adds another level of tension and mystery to a story. Unreliable narrators aren’t new in fiction, but I’m talking about narrators and protagonists who deliberately keep secrets from us, or whose pasts are mysteries that loom over the story and are only revealed a piece at a time. The story of the narrator blurs or fuses with the central plot of the novel, each informing the other. When done well, these are the kind of reads that stay with you long after you turn the final page. 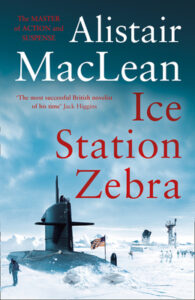 MacLean was one of the best-selling authors of all time, writing such classics as The Guns of Navarone and Where Eagles Dare. MacLean said he was a storyteller, not a writer; many of his characters are two-dimensional, and the few female characters in his novels—there are none in Ice Station Zebra—are usually vapid. But MacLean was an expert at placing characters in hostile environments and ratcheting up the tension. This novel is an excellent example, and Carpenter is quite possibly my favorite spy-thriller narrator. Right when you feel you can trust him, he reveals that what he just said was a lie, or he does something suspicious without explaining why. But he also reveals just enough to make you want to trust him, drawing you further into a tale of espionage set aboard a nuclear submarine underneath the Arctic ice. The finale is a great setup of twists and tension, a classic set piece of double-crosses, deception, and revelation. 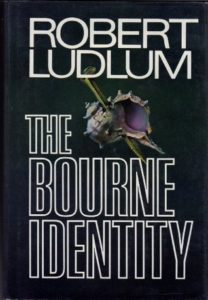 The Bourne Identity by Robert Ludlum (1980)

Long before Matt Damon played Jason Bourne on film, Robert Ludlum wrote the first of a trilogy of novels starring Bourne. The novel opens with a violent scene on a boat in the Mediterranean: a man is shot multiple times and falls into the sea, just before the boat explodes. The man survives, but he suffers from retrograde amnesia: he doesn’t know his own name or anything about his identity. The only clue is a slip of film negative embedded in his hip that contains information about a private bank account in Zurich. From this unusual start begins the odyssey of a man searching for his own identity, an identity that includes a remarkable set of survival skills, including martial arts, a propensity for deception and improvisation, and a great familiarity with firearms.

What the novel does even better than the films is depict the bifurcated nature of Bourne. On the one hand, he is at a complete loss as to who he is—no name, no past. On the other, he learns quickly is that he is incredibly talented at both avoiding death and dealing it out. Shocked and horrified by what he is capable of, Bourne must piece together why several shadowy forces, including one of the world’s most notorious assassins, Carlos the Jackal, want him dead. Despite occasional purple prose, this novel has you racing alongside Bourne to learn who he really is, while at the same time dreading the answer. The Bourne movies are great, but Ludlum’s novel is a richer, more complicated tale. 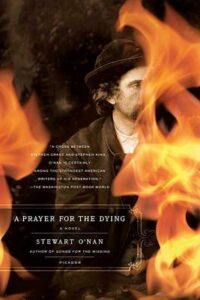 Set in the tiny town of Friendship, Wisconsin a few years after the Civil War, A Prayer for the Dying is the beautiful and harrowing story of Jacob Hansen, a Civil War veteran who is the town’s undertaker, constable, and pastor. He lives with his wife Marta and their baby daughter Amelia, a young family with a bright future. A man of faith, Jacob feels a great responsibility for the citizens of Friendship. He also speaks in the second person, a narrative choice that increases our empathy for Jacob and also thrusts us with startling and uncomfortable immediacy into Jacob’s mind—“You don’t like to be around horses anymore. It’s understandable, having had to eat them during the siege, to burrow into their warm, dead guts for cover, but you don’t talk about that, or only to Marta, who’d never let it slip.” Such revelatory moments are precursors to a sinister pair of events: a mysterious and fatal plague that spreads quickly through the town, and a wildfire that is moving inexorably toward Friendship, turning the idyllic prairie into a hellish landscape of flames and ash. In his struggle to save Friendship, Jacob’s faith, love for his family, and sense of duty are all tested beyond the breaking point. Watching a good man become slowly unhinged is tragic, but the second-person narration that O’Nan employs adds to the horror, and to our desperate hope that Jacob will survive. At just under two hundred pages, written in spare but gorgeous prose, A Prayer for the Dying is a powerful and haunting narrative about faith, guilt, and grief.

Flynn is best known for Gone Girl (2012), but to my mind her debut Sharp Objects is a better novel, a dark, Gothic tale that is as much a psychological horror story as it is a murder mystery. The narrator, Camille Preaker, is a journalist in Chicago whose boss sends her to cover a murder in her hometown of Wind Gap, Missouri. Camille starts off in a bad place—she has carved several words into her skin and just recently finished a stay in a psych hospital—and her return home is not an improvement. For one thing, a girl has been murdered and a second is missing. For another, Camille must face Adora, her estranged, neurotic mother, as well as her thirteen-year-old half-sister Amma. Camille had another sister, Marian, whom Adora always preferred over Camille, and who died years before. No wonder Camille self-medicates with bourbon and carves words like “weary” and “spiteful” into her own flesh.

Dysfunction is the order of the day with Camille and her family. Adora babies her youngest child Amma, who turns out to be far less innocent than she appears. When a Kansas City detective, Richard Willis, arrives to investigate a potential serial killer, Camille starts a sexual relationship with him, but refuses to remove her clothes, afraid of his reaction if he saw the words carved into her flesh. Camille is both damaged and a walking irony: a reporter afraid to investigate herself yet drawn to the dark abyss of her own past. Her revelations about herself and her shocking discoveries about Wind Gap and her own family are as much an investigation into the dark impulses of human behavior as they are a thrilling plot that keeps us reading to the end. 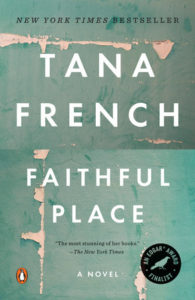 I’ll read anything by Tana French, but this, the third of her Dublin Murder Squad books, is my favorite. Frank Mackey, a seasoned undercover detective, long ago left Faithful Place, the Dublin cul-de-sac where he grew up. Over two decades earlier, nineteen-year-old Frank and his first love, Rosie Daly, planned to escape their families and elope to England. Frank waited for Rosie on the appointed night, but she never showed. Heartbroken, Frank walked away from the neighborhood. Frank hasn’t heard a word about Rosie or her whereabouts since—until Rosie’s suitcase is found hidden in an abandoned house on Faithful Place. The suitcase contains Rosie’s birth certificate and ferry tickets for England, which Frank knows she would never have left willingly. Now Rosie is officially a missing person, which brings the Dublin police to Faithful Place, much to the anger and resentment of the residents, many of whom see Frank as just another cop and a neighborhood kid who turned his back on his people. The cops, however, don’t want Frank involved in the case in any way. And so Frank resorts to investigating not only his old neighborhood and his own dysfunctional family but also the police themselves, keeping tabs on their investigation while trying to solve her disappearance himself.

French does an outstanding job of bringing all of her characters to live, full of broken dreams and resentments and fantastic Dublin dialogue. Frank Mackey is a tough man, but he is also a wounded one, and the balancing act between his family and the cops becomes increasingly harder to maintain. But in a world of lies and half-truths, Frank is an expert, determined to learn Rosie’s fate, no matter what the cost. And the cost is high. 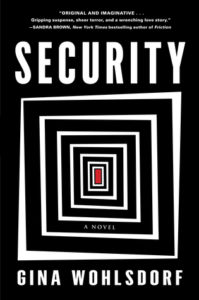 This is a savage, sardonic bloodbath of a story, suffused with mordant wit and a Grand Guignol style. The Manderley Resort, an exclusive, high-tech hotel on the California coast, is about to open, but someone is determined to keep that from happening. Every single staff member of the Manderley is being watched, and over the next several hours, they will be killed off, one by one. Gory and breathless, with nods to Hitchcock by way of Tarantino, Security is also a love story featuring a mysterious and oddly disembodied narrator, and the identity of that narrator becomes almost as compelling as the taut suspense Wohlsdorf employs around a single question: who will survive? 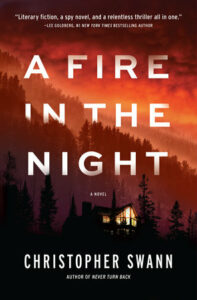 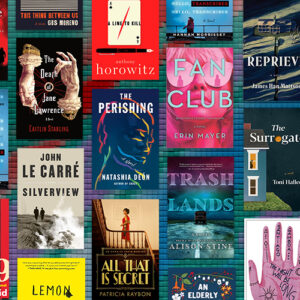 The hot vaxx summer has ended, and the long, cold winter approaches, but in that sweet spot between unbearable heat and brutal...
© LitHub
Back to top