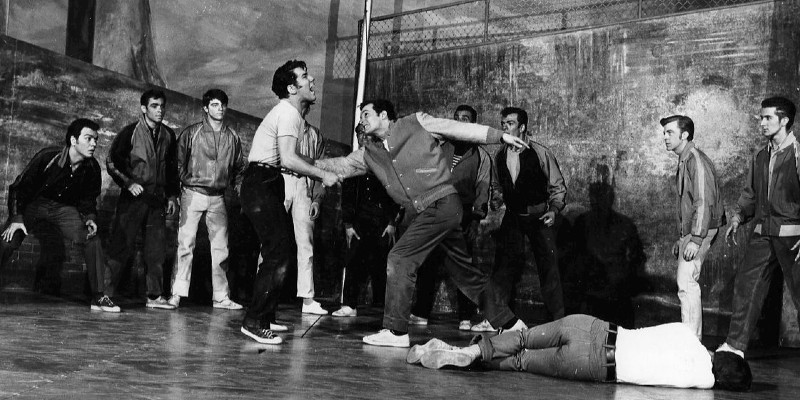 The long tradition of crime and musicals, all tangled up.

Musical theater and crime aren’t typically thought of as concepts that go hand-in-hand, outside of dad jokes about Broadway ticket prices. But the two have been interwoven for longer than you might guess. For centuries, the theater scene was considered separate from polite society, a refuge where groups like queer people, sex workers and people of color were frequently creative pioneers and, if still not all the way accepted, more accepted than they’d be in the light of day. Less importantly, but more importantly for the purposes of this article, the musical genre in its varied splendor has given us a wealth of great crime stories. Here are six of the best, as well as where you can listen or watch if you don’t have dad-joke money. 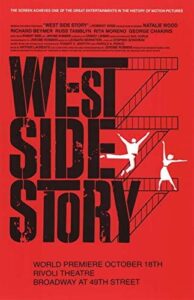 Stephen Sondheim and Leonard Bernstein’s masterpiece obviously has its roots in Shakespeare, but even in America its dynamics are a tale as old as time—the two originally conceived it as “East Side Story” and its clashing gangs and star-crossed lovers as Jewish and Italian. And while the cynical-beyond-their-years Jets may have an entire musical number mocking the notion that society created them, the play itself clearly understands they didn’t come from nowhere, and that they have loved ones who notice when they don’t come home.

Steven Spielberg’s 2021 adaptation is even more explicit, deliberately setting the turf war against the backdrop of slum clearance to build Lincoln Center. Lives are lost and ruined over the course of these two nights, but to the bigger, meaner crooks who actually control New York, the central players may as well never have existed.

Where to watch/listen: Spielberg’s film is streaming on Disney+ and HBO Max, while the Best Picture-winning 1961 version is on HBO Max as well. 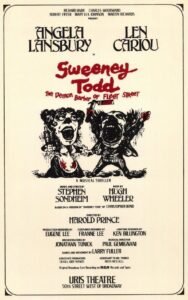 Sondheim (get used to him) again delves into an existing story, this time the Victorian penny dreadful/proto-urban legend of a barber who cuts his customers’ throats, sending them down a chute to the pie shop next door. In his 1979 collaboration with Hugh Wheeler, Sondheim’s sympathy for the devil comes through again; here, pulling from an earlier stage play, Todd is actually Benjamin Barker, a young family man framed and transported by the judge who covets his wife.

Back in town and bent on revenge, Todd teams up with piemaker Mrs. Lovett, and the two lay out their mission in one of Sondheim’s lyrical high-water marks, “A Little Priest” (“The history of the world, my love/Is those below serving those up above”). Sondheim would never be interested in just a serial killer yarn; he’s fascinated by what makes even a seeming complete monster tick.

Where to watch/listen: Tim Burton’s 2007 film adaptation, available on HBOMax, is… fine, but the original 1979 cast recording, with Len Cariou as Todd and Angela Lansbury as Mrs. Lovett, is the gold standard. 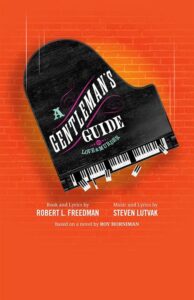 A Gentleman’s Guide to Love and Murder

The most recent selection on our list, “Gentleman’s Guide” cleaned up at the 2014 Tonys, but like a lot of other selections, it’s got much deeper roots: the 1907 novel “Israel Rank: The Autobiography of a Criminal,” also the basis for the 1949 British film “Kind Hearts and Coronets.” Our protagonist, Montague Navarro, discovers his mother was disowned by the D’Ysquiths, her family of loathsome aristocrats, for marrying for love. After he accidentally dispatches one through inaction, Navarro realizes how easy it would be to work his way up the line and avenge his mother. The kicker, of course, is that as in the 1949 film, all the D’Ysquiths are played by a single actor-masterful American theater actor Jefferson Mays, in the original Broadway cast. Mays shows almost preternatural range in no fewer than nine roles, ranging from a eugenicist bodybuilder to a sanctimonious philanthropist.

Where to watch/listen: It’s never been filmed but the original Broadway cast recording is available on major music streamers. 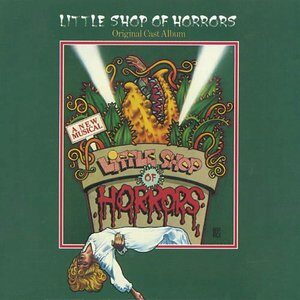 The musical adaptation of Roger Corman’s 1960 comedy obviously owes much to the low-budget B-movie creature features of the era, but it’s also got a classic noir setup. After all, think about how many classics of the genre begin with a wuss psyching himself up to kill a woman’s abusive boyfriend (to be fair, the number gets smaller if you add “…who is a Harley-riding dentist.” ). As the murderous plant Audrey II takes center stage, the story becomes far more of a straight horror/sci-fi, but the scenes where poor Seymour’s boss threatens to expose him and he realizes his only option could have been lifted straight out of a James M. Cain book.

Where to watch/listen: Frank Oz’s 1986 adaptation of the musical (it’s a movie based on a musical based on a movie, got that?) is streaming on HBOMax. 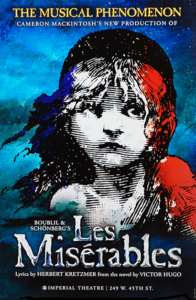 Claude-Michel Schönberg and Alain Boublil’s adaptation of Victor Hugo’s novel is of course about far more than just crime. But one of its biggest looming themes is the arbitrary cruelty of the law as an institution, and how that defines what we think of as crime. While the musical emphasizes the gap between the haves and have-nots as the central impetus for the historical June Rebellion, it’s hard not to view the criminal justice system—a system that treats those who break the law to survive like Jean Valjean and Fantine as moral equals to scumbags like the Thenardiers—as equally worthy of dismantling.

And while Valjean’s fanatical pursuer Inspector Javert is Hugo’s creation, his influence echoes throughout crime fiction, from Tommy Lee Jones’ iconic U.S. marshal in “The Fugitive” to Hank Schrader in “Breaking Bad.”

Where to watch/listen: The less said about Tom Hooper’s 2012 film adaptation, the better, but the best bet for cast recordings is probably the 10th Anniversary concert recording. 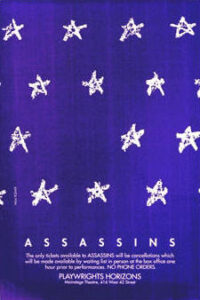 Of course we’re ending with Sondheim, his best musical and one of his last. Sondheim takes direct aim, no pun intended, at the American dream from the beginning, as the proprietor of a liminal gun shop urges all the real-life assassins (and would-be assassins) of American presidents to seize their ambitions by… killing the president. From there the show emphasizes just how desperately lost each of those figures was, and how, except for John Wilkes Booth, just how unconnected their rage and violence was from the actual presidents they targeted. Sondheim’s humor comes out even in such a grim subject, as in “I Am Unworthy of Your Love,” a back-to-back duet by John Hinckley Jr. and Squeaky Fromme addressed to Jodie Foster and Charles Manson, respectively; or the best song in the show, “The Ballad of Guiteau,” the story of James Garfield’s assassin, who believed James Garfield, a complete stranger, had promised him the French ambassadorship. Later productions, however, add the song “Something Just Broke,” a reaction by normal Americans to the JFK assassination that shows just how the far the impact of these broken people’s actions reached.

Where to watch/listen: This one’s also never been filmed, and frankly I’m not sure how you would, but three cast recordings, from the 1991 off-Broadway production, the 2004 Broadway production and the 2021 revival are available to stream. 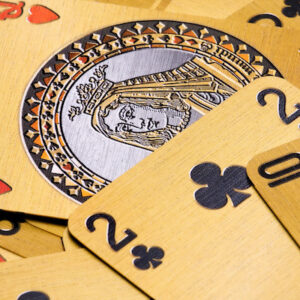 Like a horoscope, everybody has a trope. For you, there’s a word, a phrase, a trope that makes you pick up a book every...
© LitHub
Back to top