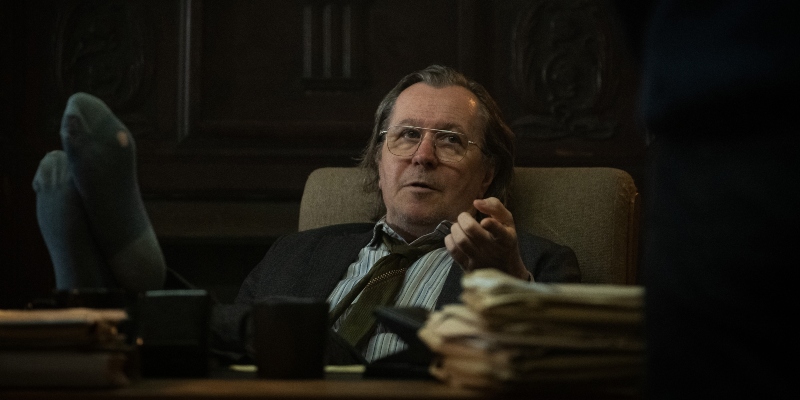 If the key to comedy is timing, the key to subterfuge is, well… also timing.

Adapted from Mick Herron’s Jackson Lamb series (the eighth installment of which is due out this May), Apple TV+’s Slow Horses launched last week with a bang—literally. At the end of the first two episodes the streamer dropped by way of premiere, one of the series’ titular Slow Horses ends up slumped on a rainy front stoop, shot through the head. Pan back, cut to black, see most of you could-have-been spies next week.

If this sounds like the culmination of what must have been an explosive pair of opening hours, you don’t know the Slow Horses. Incompetent, dull, and slow off the mark, the Slow Horses of both Herron’s imagination and screenwriter Will Smith’s small screen adaptation are the spies that not just time, but even the most basic common sense, forgot. Comprising addicts, losers, and a wanna-be-Bourne legacy recruit (Jack Lowden) who blew a training exercise so spectacularly that hundreds of fake people and millions of fake pounds were lost in the process, the not-spies of Slough House (the pejoratively named dump of a satellite office from which the “Slow Horse” pejorative itself is taken) pretty much by definition couldn’t work their way out of a paper bag—a fact that their boss, Gary Oldman’s coarse, gleefully flatulent Cold War-era superstar, Jackson Lamb, is only too happy to constantly remind them. Too well trained to be kicked out on the street, but too shit at real spycraft to be kept in service at Regent’s Park, their only real professional purpose seems to be to give Lamb a team of flops to yell at.

Contrary to the big bang that so decisively caps off the series’ second episode, the two hours that precede it are anything but explosive. Rather, they find the fallen golden boy River Cartwright (Lowden) sorting through bags of a has-been right-wing journalist’s manky trash, the hapless Min (Dustin Demri-Burns) sifting through a pile of council licensing applications from 2005, the over-eager Struan (Paul Higgins) inspecting parking tickets from the 90s, and the preemptively exhausted Louisa (Rosalind Eleazar) scouring public library searches for evidence of money laundering—a search which, as she notes pointlessly to no one in particular while taking possession of the paper (yes, paper!) file, would more likely be evidence of people without real money to launder than any kind of smoking gun. To which her colleagues’ bland silence screams: exactly. As far as Jackson Lamb would have it, if Slough House isn’t literally hell on earth—which, arguably, for most of the Slow Horses it already is—then at least he can do his damnedest to make it an utterly meaningless purgatory.

For anyone who loves a good spy drama, this setup is likely to be disappointing. I could attempt to assuage possible concerns by noting that obviously, beyond River’s wounded trash-picking, something major happens over the course of the first two episodes, enough of a real-spy shit-show arising that the Slow Horses—and Lamb among them—are dragged into the fray. I could explain that a homegrown extremist right-wing hate group, the Sons of Albion (like King Arthur, get it?), kidnaps a British Pakistani college student and posts a live feed to the whole country promising to cut off his head at dawn the following day. I could suggest that Kristin Scott Thomas’s glacially mercenary Diana “Lady Di” Taverner, Second Desk at Regent’s Park, has more shadowy schemes running than George Smiley could shake his spectacles at.

I could also suggest that Lamb, unkempt, uncaring, and seemingly unconnected from reality as he is, is the most keenly aware of the ends to which Taverner might go to further her professional agenda of anyone else in the service. I could even admit that it took me two full-season watch-throughs to catch all the clever twists and subtle turns that Smith and the rest of the series’ creative team managed to work in.

As slow as Slow Horses might begin, its short first season is more than worth sticking out to the end.

And yet, what recommends Slow Horses more than anything are the parts of it that don’t fit the classic spy drama model, but rather all the ways in which it shows spycraft gone, as so many of us have in 2022, goblin mode. Why bother putting any effort into “ambition” or “socializing” or, god forbid, “self-care,” when the world—in this case, taking the form of the miserable Jackson Lamb—has declared quite decisively that it owes you jack shit? Why not “slob out,” as The Guardian would have it? Were any of the Slow Horses to truly believe there was any path at all for them back to Regent’s Park, they might be using their time in purgatory to learn new languages, to practice new martial arts, or even simply to hone the tradecraft skills they learned before being put in spy time-out. But not only are none of them doing anything remotely resembling self- or professional betterment, most of the time they’re actively working at becoming worse.

As far as basic storytelling goes, it’s not edifying. It’s definitely not heroic. But it is—thanks to the meaty writing of Smith, the grimily subtle direction of James Hawes, and the pounding, paranoiac soundtrack of Brighton-based music duo Toydrum—supremely well constructed. From the sharp rat-a-tat dialogue that manages to avoid sounding too clever by half for how bitterly miserable every character so obviously is while delivering it, to the grimly funny frames that Hawes and director of photography Danny Cohen manage to wedge River and the rest of the Slow Horses in as they (sometimes literally) trip over their own laces trying to play spy again for real, to the pitch-bent synth notes that twang over the subwoofer heartbeat underscoring half the action, the hopeless mediocrity of these characters is never not centerstage. And man, when Coldplay’s “The Scientist” pops up in a few weeks, when the moment could not be less appropriate? A stroke of well-timed, worst-self genius.

This commitment to goblin mode alone would be enough for me to argue that, as slow as Slow Horses might begin, its short first season is more than worth sticking out to the end. Still, on the off chance that the promise of more trash-picking doesn’t grab you—and there will be more trash-picking—then take as extra incentive the fact that the second season is already in active development. Which, now that the age of streaming has reached the point where abrupt cancellations are as likely as eleventh-hour renewals, is more than most new streaming series have going for them.

Still, that’s all in the future. For right now, give the first season of Slow Horses a shot. It will not make you a better person, and it certainly won’t make River or anyone else in Slough House a better spy—but what it lacks in literally any edifying qualities at all, it makes up for in a grossly perfect sense of, well, timing. 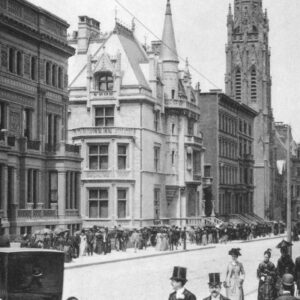 Every writer I know has a finely honed system for avoiding writing. Some develop a sudden need to deep-clean their houses...
© LitHub
Back to top