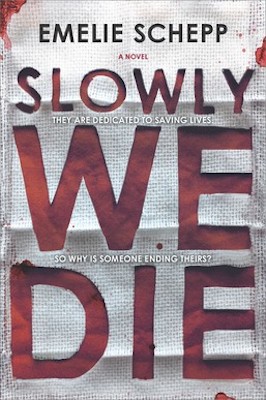 The following is an exclusive excerpt from Slowly We Die, by Swedish crime-writing superstar Emelie Schepp. In the following passage, Schepp participates in a long Swedish tradition of using crime novels to critique American policy; in this case, the characters discuss the relative merits of harsher versus more lenient sentencing.

Prosecutor Jana Berzelius sat on one of the chairs in the broadcast studio with her legs crossed. She was waiting for her turn to be interviewed by Richard Hansen, the host of the morning program for Channel P4 Östergötland on Swedish Radio.

When she saw Hansen’s signal, she walked silently to the seat opposite him and put a pair of headphones on. She listened as Hansen smoothly changed topics and announced that next up was Norrköping lead prosecutor Jana Berzelius, here to talk about a rise in criminal gang activity.

“Extortion, robbery and violent attacks with hammers, knives and automatic weapons. Gang violence continues to increase. Jana Berzelius, you’ve been the lead investigator in many cases of serious organized crime here in Norrköping for many years. What do you think is the reason for the increased violence we’re seeing?”

Jana cleared her throat. “First of all, we have to remember that we’re talking about the number of reported crimes, that an increase in crime, statistically speaking, isn’t the same thing as an actual increase in crime…”

“You’re saying that the numbers lie?”

“What we can see is that gang violence all over Sweden is increasing, at the same time as violence in society in general is decreasing.”

“And what is causing the increased violence?”

“There are a number of possible explanations,” she said.

She leaned forward. “You already named the most important ones in your introduction, and I can only agree that increased access to firearms along with an increase in social and economic segregation are contributing factors in this context.”

“As you know, we’ve been tracking the criminal gangs in Norrköping,” Hansen said, looking down at thee papers in front of him. “Our stories about gang activities regarding the illegal trafficking of weapons, narcotics and people are our most-followed stories. It has been a year since that coverage originally appeared, and there’s hardly been any improvement in this area. Very few jail sentences have been handed down, few cases have even ended up at trial and many people are saying that the Swedish legal system is failing. Should we be concerned?”

“There is always a risk of error in the criminal justice system, which in unfortunate cases can lead to wrongful convictions or even a failure to convict.”

“Can a biased prosecutor pose such a risk?”

“Yes, just as much as manipulated police reports, misleading expert witnesses or false testimony. No one, not even a prosecutor such as myself, can deny that these are the dangers that sometimes result in wrongful convictions,” Jana said.

“And what do you think abut those voices calling for harsher sentencing for violent crimes, for example?”

“And what do you think abut those voices calling for harsher sentencing for violent crimes, for example?”

“We can’t prove that harsher sentencing results in fewer crimes. However…”

“In the United States, they have prioritized stricter sentencing, and it has resulted in—“ Hansen said.

Hansen looked down at his papers again. “Stricter sentencing is an important objective of the opposition’s legal policy.”

“The foremost duty of criminal policy should be to work for increased opportunities for crime prevention.”

Hansen looked up at her and said, “In so-called Policegate, police brass and businessmen have been accused of interfering with justice, accepting bribes and smuggling narcotics, and they will very likely receive long prison sentences, if convicted.”

“From what I understand, Policegate is both complicated and unusual. Besides the obviously reckless elements of violent crime, this is also about a state-appointed official of the highest level who abused his authority, and very gravely so.”

“Besides the obviously reckless elements of violent crime, this is also about a state-appointed official of the highest level who abused his authority, and very gravely so.”

“You’re referring to National Police Commissioner Anders Wester,” Jana said. “But we don’t have the whole story yet, and not all of the suspects have been questioned…”

“That’s true, but you can’t deny that harsh sentences are needed in such a unique circumstance, to set a precedent for how seriously our society views this type of crime, can you? This is about our trust in the police force.”

“But don’t you agree that the penal system is a way for society to see how seriously different offenses are taken?” Hansen said.

“Yes, but as I said, there is no proof that harsher sentences result in fewer crimes, in the short term at least.”

“If I understand you correctly, you think that, instead, we should invest more resources in policies that focus on prevention, and this is the only way to lower crime?”

“And what has led you to this conclusion?”

Jana looked him straight in the eye.

From Slowly We Die. Used with the permission of the publisher, MIRA Books. Copyright © 2018 by Emelie Schepp.

The Crime Reader's Guide to
Growing Up Gay in the South 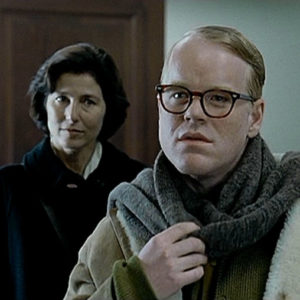 The Crime Reader's Guide to
Growing Up Gay in the South Growing up gay in the South—the least to say, it’s sometimes difficult, and often feels impossible, and more likely than...
© LitHub
Back to top