Soap Operas Taught Me How To Write Crime Fiction

Learning to Write, One Soap Opera at a Time

I think we all can agree that mysteries are hard to write.

Regardless of what category the story falls into—crime fiction, hard boiled thriller, or cozy mystery—the demands on the writer are steep and plenty. Readers expect a horde of red herrings; clues that can’t be perceived as clues; a multi-layered plot that is slowly, sinfully, unraveled; tension and suspense being maintained throughout the narrative; a smorgasbord of entertaining suspects; and of course, a unique twist on how to commit a murder. If that doesn’t make a writer want to power down their computer and break every number two pencil in sight, they aren’t human. Or they’re the reincarnated spirit of Agatha Christie.

Since I am neither robot nor reincarnate, I ran from the opportunity when my editor suggested I write a cozy mystery series.  Sure, part of me I was flattered, but a larger, more logical part was confident the challenge was beyond my writer’s skill set. Until I uncovered a dirty little literary secret: Cozy mysteries are nothing more than soap operas.

Think about it. Regardless of a cozy mystery’s setting, whether it be a posh boarding school, a rural veterinarian’s office, or a hipster record store in Williamsburg, Brooklyn that refuses to sell anything other than vinyl, the primary focus of the series is on a group of intimately intertwined characters that face one major crisis after another. Sounds like a soap to me.

Once I recognized the bridge that connected these two art forms and that Jessica Fletcher is nothing more than a less glamorous version of Erica Kane, I could breathe. I was completely at ease because I was completely within my own sweet spot. I state this without a hint of ego or exaggeration, but if I am an expert at anything, it’s soaps.

I get the pacing, I get the characters, I get that the dialogue must convey as much emotion as exposition, I understand how to weave in and out of plot and subplot, and I live for the cliffhanger. For me, soap operas are a comfort zone. So the moment I understood all of this was the moment I called my editor and said, “Yes, I can write a freakin’ cozy mystery!”

I am a bona fide, certifiably obsessed, been watching for decades, super soap opera fan. That’s right, I love my soaps and I am not ashamed to admit it.

Now just to be clear, I am a bona fide, certifiably obsessed, been watching for decades, super soap opera fan. That’s right, I love my soaps and I am not ashamed to admit it.

It all started when I was twelve-years-old and stayed home from school sick. While my mother was going about her daily chores, I lay in bed watching an endless loop of mindless entertainment. Cartoons, game shows, reruns, and then something popped up on my little 13” black and white TV screen that I had never seen before. It was a drama like the ones that were shown at night, only this one was on during the day. How intriguing. How innovative. How could I possibly have lived for twelve years on this earth and not seen this before?

Immediately, I was transfixed. This wasn’t a rerun of some long-forgotten television series or an edited rebroadcast of a classic film, this was an original story with real actors, all of them breathtakingly beautiful, talking about people and places and things that I had never heard of, but that I absolutely, positively had to know everything about. And then as if the spell they had cast over me wasn’t magical enough, something happened that changed my life forever.

My mother, at this point, was in the middle of folding laundry at the foot of my bed and without breaking her rhythm manipulated my brother’s sweat socks into one of those sock balls and simultaneously commented, “Uh oh, it’s never good when someone says that.” She carried on with her domestic drudgery as instrumental music swirled to a crescendo and Macdonald Carey’s soothing baritone told us, wisely, that like sands through the hourglass so are the days of our lives. Wisdom was being hurled at me from on- and off-screen and I ask you, how lucky could one twelve-year-old boy get?

From that moment on I was hooked, and I continued to watch Days of Our Lives, Love of Life, One Life to Live, Guiding Light and so many others on snow days, when we had half days thanks to those treasured, slightly-clandestine teacher’s conferences, and of course, during summer break. In high school I ran home with a legion of Luke and Laura fans to watch Elizabeth Taylor curse their nuptials on General Hospital. On those days when I had to stay late for track practice or school play rehearsal, I would make my grandmother, who lived with us and watched our stories every day, tell me what happened on that day’s episode. Scene. By. Scene.

When I got my first VCR in the early 1980’s, my life changed yet again. It was like be handed the beta-version of freedom. I didn’t have to run home to catch my soaps, I didn’t have to alter my plans, all I had to do was program my VCR to tape several hours of steamy, mysterious, plot-twisty daytime drama every day.

As a result, my soap viewing expanded tenfold and I was able to add the groundbreaking Santa Barbara, the Proctor & Gamble stalwarts Another World and As The World Turns, the controversial Loving, and Young and the Restless (which I still watch to this very day) to my roster of shows that I had to see every single weekday of my life. But no daytime drama captured my attention as both an audience member and a future spinner-of-tales like The Edge of Night did. It is primarily because of this specific soap opera that I felt secure enough to commit to becoming a cozy mystery writer.

I took everything that I had learned symbiotically from being a soap watcher and poured it into my books.

The Edge of Night was unique and not at all a typical soap. Sure it had its share of filthy rich characters like Raven Alexander Jamison Swift Whitney and love triangles like the classic Denise-Miles-April three-way, but instead of romantic montages they had crime scenes. Instead of scantily clad bodies they had a dead body count. This was the mystery soap and was initially created to be the daytime version of Perry Mason so it churned out episode after episode brimming with non-stop crime, murder, and mystery. And I loved every blood-soaked second of it.

The truth is that I’ve always wanted to be a soap writer and perhaps someday that will happen, but for now, thanks to The Edge of Night, I’m able to put my energy into The Ferrara Family Mystery Series. Utilizing the same techniques and dramatic elements that I observed watching Edge, I can bring to life characters, plots, and an endless series of murder mysteries. It’s like doing a reverse jump from the screen to the page.

I took everything that I had learned symbiotically from being a soap watcher and poured it into my books. I created a fictionalized setting based on the real lakefront community in Tranquility, New Jersey that was immediately familiar, but heightened just enough to make the reader want to take up permanent residence. I crafted characters with relatable attributes that readers would enjoy spending time with and added a vital layer of backstory to give their history more emotional weight. And then it was time to plot out the mystery.

I don’t know why I was so frightened to take on such a literary challenge. Yes, there are some rules in the cozy mystery genre that must be adhered to, but they’re minor and a good murder is bloody good fun to write.

The Edge of Night went off the air in 1984 yet I still recall many of the plot twists and I use those memories as inspiration. I often ask myself, what would Henry Slesar do? Slesar was the head writer during the time when I watched the show and a celebrated writer outside of the daytime world, winning the Edgar Allen Poe award for his first novel, The Gray Flannel Shroud, and writing for Alfred Hitchcock Presents and Ellery Queen Mystery Magazine. Siphoning even the tiniest portion of his genius has given me the courage to fledge forward into the mysterious unknown.

The first three books in my series—Murder on Memory Lake, Murder in Tranquility Park, and the forthcoming Murder at Icicle Lodge—are the start of what I hope will be a long-lasting series reminiscent of the soap operas I love. Filled with colorful characters, memorable dialogue, and above all, plots that make you go hmmm. Twist endings that make the reader’s jaw drop and raise an eyebrow aren’t easy to write, but with my background as a soap opera fan I have learned from the masters.

Thankfully, I was smart enough to know that it was time for this student to take over the reins.

J.D. Griffo is an award-winning writer and a graduate of New York University. He has studied at Playwrights Horizons and Gotham Writers Workshop, and has written several screenplays. He is the author of the Ferarra Family Mystery series. His latest in the series, Murder in Tranquility Park, is now out from Kensington Books. Follow him on Facebook or on Twitter @Michael2264.
http://michaelgriffo.com/ 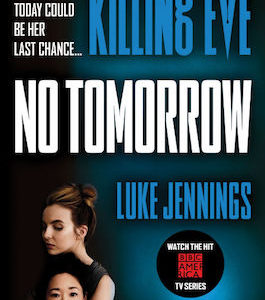 Cruising through Muswell Hill on his carbon-framed bike, his hands resting lightly on the alloy handlebars,  Dennis Cradle...
© LitHub
Back to top