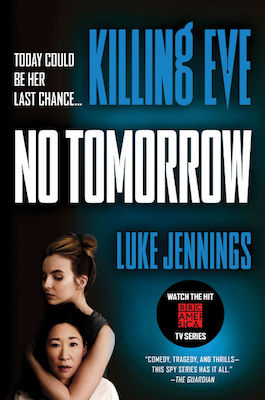 The following is an exclusive excerpt from Killing Eve: No Tomorrow, by Luke Jennings, the second thriller in the series that first inspired the BBC show, Killing Eve, starring Sandra Oh. The cat and mouse chase continues, and finds former MI6 operative Eve discovering new assets while Villanelle, the notorious assassin, closes in.

Cruising through Muswell Hill on his carbon-framed bike, his hands resting lightly on the alloy handlebars,  Dennis Cradle feels a pleasing exhaustion. It’s a longish ride from the office to his north London home, but he’s made good time. It’s something that he would hesitate to confide to his colleagues or his family, but  Dennis sees himself as the upholder of certain values. The hard cross-town ride satisfies the Spartan in him. Cycling keeps him lean and mean, and, incidentally, looking pretty damn sportif in his form-fitting Lycra shorts and tactical-fabric jersey, given that he’s going to be forty-eight next birthday.

As the director of D4 Branch at MI5, responsible for counter-espionage against Russia and China, Dennis has reached a level of seniority where he can, if he wishes, get chauffeured home in one of the Service’s fleet of anonymous, mid-range vehicles. Tempting of course, status-wise, but a slippery slope. Let the fitness go, and it’s all over. Before he knows it, he’ll be one of those paunchy old shags propping up the Thames House bar, nursing his Laphroaig and complaining about how much better things were before the fembots in HR took over.

Cycling helps keep Dennis in touch. Keeps his ear to the street and the blood racing through his veins. Which is where he needs it, given Gabi’s raging libido. God, he wishes he was going home to her right now, rather than to Penny, with her diet-drained body and her incessant fault-finding.

As if on cue, as he glides the final hundred meters, the “Eye of the Tiger” theme from Rocky III kicks in on the Bluetooth player in his cycling helmet. As the big chords punch home, Dennis’s heart begins to pound. In his mind, Gabi is waiting for him on a king-size bed in the master cabin of a superyacht. She’s naked,  except for a pair of fluffy white tennis socks, and her gym-toned legs are invitingly parted.

Then, incomprehensibly, a steel-strong hand grabs his arm and wrenches him to a halt, the bike skidding to the ground beneath him. Dennis opens his mouth to speak, but is silenced by a vicious short-arm punch to the gut.

“Sorry, squire. Need your attention.” Dennis’s captor is fortyish, with the features of a well-groomed rat, and smells of stale cigarette smoke. With his spare hand, he removes Dennis’s cycle helmet and drops it on the fallen bike. Dennis writhes, but the grip on his arm is unyielding.

“I’m here for a friend, squire, who needs to talk to you. About Babydoll.”

The remaining color drains from Dennis’s face. His eyes widen with shock.

Then, incomprehensibly, a steel-strong hand grabs his arm and wrenches him to a halt, the bike skidding to the ground beneath him. Dennis opens his mouth to speak, but is silenced by a vicious short-arm punch to the gut.

“Pick the bike up. Put it in the back of the vehicle. Then get into the front seat. Do it now.” He releases Dennis, who looks around him with dazed eyes, noting the elderly white Ford Transit van and the pasty-faced youth with the lip-piercing at the wheel.

Opening the van’s rear door, his hands trembling, Dennis turns off the helmet’s Bluetooth sound-system, which is now playing “Slide It In” by Whitesnake. He hooks the helmet over the handlebars and loads the bike into the van.

“Phone,” Ratface says, following the demand with a stinging slap that leaves Dennis’s ears ringing. Shakily, Dennis hands it over. “OK, into the passenger seat.”

As the van pulls out into the traffic, Dennis tries to remember the Service capture and interrogation protocols. But suppose this lot are the sodding Service, and part of some internal investigation team? They’d have to have gone to the DG to authorize turning over someone of his rank. So who the fuck? Could they be hostiles? SVR, perhaps, or CIA? Just say nothing. Take each moment as it comes. Say nothing.

The drive takes less than ten minutes, with the Transit van weaving in and out of the rush-hour traffic. They cross the North Circular Road, and then pull in to the car park of a Tesco superstore. The driver selects a bay at the furthest point from the store’s entrance, brings the van quietly to a halt, and switches off the ignition.

Dennis sits there, his face the color of raw pastry, staring through the windscreen at the boundary fence. A faint fuel haze rises from the traffic on the North  Circular. “Now what?” he asks.

“Now we wait,” says the voice of Ratface behind him. Further minutes pass, and then a ringtone sounds. Grotesquely, it’s a laughing duck.

“For you, squire.”  From the back seat, Ratface passes him a cheap plastic phone.

“Dennis Cradle?” The voice is low, with a tinny electronic twang. Voice-changer, he notes subconsciously.

“You don’t need to know.  What you need to know is what we know. Let’s start with the big one, shall we? That in return for betraying the Service, you’ve accepted the best part of fifteen million pounds, and parked it in an offshore account in the British Virgin Isles. Do you have any comment to make about that?”

Cradle’s world contracts to the windscreen in front of him. His heart feels as if it’s been packed in ice. He can’t think, let alone speak.

“I thought not. So let’s continue. We know that earlier this year you took possession of a three-bedroom apartment in a building named Les Asphodèles in Cap d’Antibes on the French Riviera, and that last month you bought a forty-two-foot motor yacht named Babydoll, presently moored at the Port Vauban marina. We also know about your association with twenty-eight-year-old Ms. Gabriela Vukovic, currently employed by the fitness club and spa at the Hotel du Littoral.

“At present neither MI5 nor your family know about any of this. Nor do the Metropolitan Police or the Inland Revenue. Whether that state of affairs continues is up to you. If you want us to remain silent—if you want to retain your freedom, your job, and your reputation—you need to tell us everything, and I mean everything, about the organization that’s been paying you. Short-change us, hold a single fact back, and you will spend the next quarter-century in a Belmarsh Prison cell. Unless you die first, obviously. So what do you say?”

From KILLING EVE: NO TOMORROW. Used with the permission of the publisher, Mulholland. Copyright © 2019 by Luke Jennings.

Soap Operas Taught Me How To Write Crime Fiction 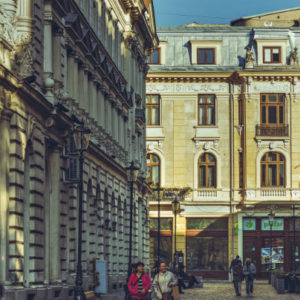 Crime and the City: Bucharest So far Romania’s capital hasn’t given us the quality of crime fiction it deserves. This is partly because (a perennial...
© LitHub
Back to top