Sue Grafton from A to Z

Talking to the Author of Y is for Yesterday

One of the unalloyed pleasures of reading the alphabetized adventures of California private investigator Kinsey Millhone is getting to spend time with Kinsey’s adopted family-community, a group that extends around Sue Grafton’s prickly protagonist like a warm-water comfort zone. Whether she’s hanging out in octogenarian landlord Henry Pitts’ welcoming kitchen; sipping bad white wine at her neighborhood dive run by curt-but-generous Rosie, and William, Henry’s older brother; or getting professional assists (and sometimes personal ones) from former lovers and colleagues, Kinsey is well-loved and well-supported, despite being “single and cranky-minded to hear some folks tell it.”

From 1982’s A is For Alibi through to the just-published Y is for Yesterday, that’s 35 years of kicking back with some genuinely friendly, fiercely loyal people. That circle of friends keeps Kinsey grounded—not to mention properly-fed—as she fights crime old-school style, immersing herself in the legwork, the surveillance and the research, hitting inevitable walls as she noses around in other people’s business and inevitably running into spots of life-threatening violence. Left to her own domestic devices, she comfort-reads Elmore Leonard and scoffs peanut-butter-and-pickle sandwiches.

In Y Is for Yesterday, Kinsey’s daily three-mile jog is now interspersed with self-defense classes after a particularly painful tangle with one Ned Lowe, a sociopath who evaded capture in 2015’s X. Even as she pursues an intriguing investigation around a ten-year-old crime involving teens, drugs and murder, Ned Lowe’s “somewhere out there” presence casts a shadow over Kinsey’s days and nights. It’s trademark Grafton; it’s also her penultimate offering before the author reaches the series’ natural closer with the intended title of Z Is for Zero. “As far as I know Z is the end until I get renewed energy,” says Grafton on the phone from her California home. “But I don’t want to go out in fireworks. I don’t want to have a grand finale in which every single thread is wound up. Life doesn’t happen that way. I’d rather give the impression that Kinsey’s life will be ongoing whether I’m there keeping a record of it or not.”

The recording of Kinsey Millhone’s life began when Grafton, a Hollywood screenwriter fed up with Hollywood, decided to give a detective series a go. As a child, she’d immersed herself in Agatha Christie; as an adult, she’d adapted Christie’s Sparkling Cyanide and A Caribbean Mystery for television. Now, as practical and single-minded as, well, Kinsey Millhone, Grafton set her inquisitive mind to what turned out to be a seriously career-changing task. Inspired with the idea of an alphabet-structured series via Edward Gorey’s The Gashlycrumb Tinies, Grafton got to work.

“I knew if I stayed in Hollywood I would just be bitter and unpleasant which I don’t think is fun,” says Grafton. “And, you know, nobody had a gun to my head: If I don’t like the work I’m doing, it’s up to me to change it, and I put in the work to change it—I liken Kinsey Millhone to digging my way out from under a prison wall with a teaspoon. When I started this series, I knew nothing about police procedure, I knew nothing about private-eye procedure, I knew nothing about California criminal law or about guns or ballistics or toxicology. I had also never written a mystery before. It took me five years to write A is for Alibi because I was struggling on about five fronts, trying to pull it together and pretend I knew what I was talking about.”

She did have an idea of how to frame the novels, and part of her in-depth, pre-writing research turned up a gem, the nearly ever-present “respectfully submitted” kicker that closes Grafton’s books and Kinsey’s cases. “I had decided to frame each novel as a written report from Kinsey Millhone and somewhere along the road during my research I read a report that ended ‘respectfully submitted, blah blah blah,’ and I thought, ‘Oh, I like that!’ You know, it seemed professional and it seemed to give punctuation to the story. Occasionally, I have not used that, and my readers get so mad at me! They go, ‘Where is “respectfully submitted”?!?!’ and it makes me straighten up my act.”

The series’ gumshoe elements stem directly from the greats: “What I always found appealing was hard-boiled private-eyes,” Grafton says. “Raymond Chandler, Elmore Leonard—they just kill me because they are so… to the point. So what I really started out aiming for was the dark side. I don’t like cozies. I think the cozy mystery trivializes homicide. And certainly Kinsey Millhone takes it seriously.”

Twenty-five books in, and Grafton’s series retains its smarts, its canny, hard-boiled character and an element of exuberance that made it a hit from the get-go. Contributing to each book’s perpetually familiar feel is the fact that Grafton has stalwartly kept the inhabitants of fictional Santa Teresa in the 1980s: in this 1989-based foray, Kinsey goes to the movies—Parenthood and Turner & Hooch—rifles through phonebooks to track people down and uses public phones to make her calls when she’s out and about. “That all seems like the day before yesterday to me,” notes Grafton. “There were no cell phones, no internet. The joy, from my perspective, is that she has to do her sleuthing the old-fashioned way. And I keep saying, police officers are not magicians: they have technology, they have an amazing array of equipment with which to analyze evidence, but somebody still has to sit there and figure out how it all connects. So I think in a way it’s more satisfying to watch her work, to watch her hunt down that key piece of information that she just has to have.”

And her sleuth is nothing if not driven. “I was already hooked,” Kinsey tells us in Y is for Yesterday. “The little terrier in my nature was busy chasing after the problem, throwing dirt up behind me as I dug my little hole. There was a rat down there somewhere and I would have it for my very own.” Even when she hits a wall, she takes action, pulling out her rubber-band-bound stack of index cards on which she jots her case notes, shuffling and reshuffling them in order to assess the investigation with fresh eyes, from a new angle, while giving herself—and the reader—a bit of a breather.

It’s a technique deeply beloved by her creator as well. “Oh, I still use them,” affirms Grafton. “They’re so great for little bits and pieces of research. And one of the things I have observed in the writing process, is that when you put it on paper, it’s like it’s cast in concrete. But it also allows you to fix problems: there will be a series of things you get down in writing, and you think, ‘This is absolutely correct.’ And then after a while, this nagging little voice pipes up and says, ‘That’s not right.’ And I can’t figure out where the error is, so what I do is I print it all, whatever section I’m dealing with, cut the scenes apart, and then just lay them out in a different order. Often, that cures the problem. It’s just like my psyche has gotten something out of sequence. What I aim for is a really clean storyline, so once I get into a section of the book that’s muddy, I halt. I do not move forward because it often means that I’m on the wrong track. Over these 40 years I’ve been working on these books, I have finely tuned my ear to how these sentences play out. I don’t always get it right, but that’s why I go back and reread, because you can hear that one word that’s out of place, like a hangnail, like, ‘Ow, that’s bad.’ So I just keep working and working. The trick is not to take all the life out of your work; I don’t want to work it so cleverly that it’s dead on the page.”

Speaking of pages, Grafton is already on to Kinsey’s next—and possibly final—chapter. “Right now I have an idea. It is the merest little flicker of an idea and at this point I never quite know if I can pull something off. So I’m opening a journal for this new book—which is what I do for every book—and I will just start spit-balling: ‘What if…?’ ‘Suppose…?’ ‘If this is true, how could this come to pass?’ And often that’s how I fumble my way to an actual storyline. Of course”—and you can totally hear a grin traveling down the phone line—“I also sometimes fumble my way right into the jungle: I’ll be working away and that little voice will say, ‘Grafton, this is not working,’ so then I just have to dump it all.”

She’s thinking about leaving Kinsey at age 39—“it was a good year for me”—but, she says, people are worried about Henry and William, who are 89 and 90, respectively in Y Is for Yesterday. “I keep having to say they are fine when the series ends. These guys are like many of the up-and-coming older generation—they’re tough as nails. They’re flexible, they’re smart and I don’t like to portray the elderly, if we should use such a word, as feeble. Certainly there are people out there in the world who take advantage of older people, but not my little group.”

Speaking of little groups, there’s a lovely nod to life on Y Is for Yesterday’s dedication page which begins, “This book is dedicated to those in our small clan, who will carry forward into the future…” “Oh, that’s my next generation,” says Grafton. “My grandchildren, and Jacob is my great-grandson. He just turned three. We have a good family—we all get along, and there’s just no uproar. Life is full of uproar; it’s up to families to give us a place to be peaceful.”

While Grafton clearly basks in the peace and grounding that her family provide, she also acknowledges what four decades of working with Kinsey have gifted her. “She makes me braver than I am,” says Grafton without missing a beat. “I am an introvert. The notion of calling up the police department and asking pertinent questions about homicide—I mean, that makes me sweat! But also, well, I hope we all mellow a little bit in life. I think Kinsey’s had hard times and what I like about her is watching her come to terms with some of her misconceptions, her grandmother being a case in point. I loved it that she always assumed that Aunt Gin was protecting her from the grandmother who was trying to get her clutches on Kinsey, and it turns out it was just the other way around, the grandmother really was concerned and Aunt Gin was the one who was putting the wrench in the monkey works. I think I love to watch Kinsey get her comeuppance; she thinks she’s so smart and she thinks she knows it all, and to see her recognize her own error, it’s….” Grafton pauses, quietly considering her PI-protagonist, her literary pride and joy. “That’s what makes her grow as a character.” 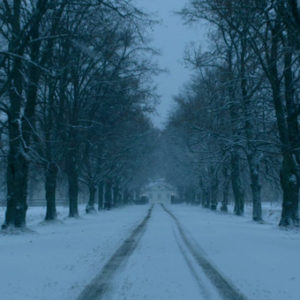 I was, as usual, in my little writing studio at Reimersholme, one of the beautiful small islands that make up Stockholm's...
© LitHub
Back to top