Anders Roslund Looks at the Growth of a Global Super-Genre

I was, as usual, in my little writing studio at Reimersholme, one of the beautiful small islands that make up Stockholm’s inner city, when my private phone rang. A number I did not recognize.

I did not answer. I never do when the caller is unknown because only twelve people have that number—this is how it has been for the past two decades, a holdover from my days as an investigative journalist writing about far-right Swedish organizations. Since then I’d been living with constant death threats, never having mail delivered to my own address, occasionally staying at hotels and in temporary homes, sometimes with a bodyguard in my living space. It was back then when I first met Stieg Larsson, another investigative journalist who like me was threatened with death, went underground, and ultimately started writing crime novels that grappled with the problems he saw in the world.

The phone rang again. And again. Finally worn out, I took the call.

A female voice. She claimed that she worked for the government, and was calling on behalf of Sweden’s prime minister. I asked her kindly to stop interrupting my work day with prank calls.

But she called again, explaining that the prime minister had read all of my crime novels, and that he wanted to invite me and my writing partner, Börge Hellström, to have a cup of coffee in his office at Rosenbad, Sweden’s version of the White House, to discuss our books. I asked her again to stop pulling my leg and inquired how she had gotten hold of my secret number.

“One of your sons gave it to me,” she responded.

“Impossible,” I said, “they would never hand out my number.” She asked me to check.

It turned out that one of my incredibly loyal sons had been contacted by her when it had become clear that I could not be reached, and he was so impressed by her description of the prime minister’s mission that he broke our cardinal rule and gave her the number.

For my final check, I called the official government number and the same woman picked up. She repeated what she had said the first time: she really worked for the prime minister and he really wanted to talk to us over a cup of coffee as soon as possible.

How did that happen?! How did awareness of our work reach the highest corridors of power? More generally, how did the Swedish crime genre make it to the top of the heap when just 20 years earlier it had lain, literally, at the bottom of the box?

Just the other day I opened exactly that box, unearthed from storage because my two sons are moving away from home and needed more boxes. In it were newspaper articles I had saved from before I published my first novel, before the dream of being a crime writer had become reality. On the bottom of the cardboard box, under books on writing technique and a couple of dictionaries, was a magazine from one of Sweden’s major newspapers. Dated 1998, it assessed the current state of Swedish literature, its publishers, and the next generation of writers. At the back of the magazine was the Swedish bestseller list. Curious, I took a moment to read it and was amazed. Among the ten bestselling books of the month was not even a single Swedish crime novel. There were historical novels, chick lit, contemporary novels, satire. And just two crime novels of any description: one British, one American. That’s how the literary scene looked just 20 years ago! I had completely forgotten because nowadays half of each month’s top ten list is made up of Swedish crime.

Twenty years ago, the Swedish crime novel—the Scandinavian crime novel—was stuck in a rut of whodunnits, essentially the same thing written over and over again.

If this pattern had not been broken, today’s version of that magazine at the bottom of my cardboard box would look exactly the same, with a total absence of Scandinavian crime. But something did change two decades ago. A handful of authors transformed the map of Swedish crime fiction, and I am proud to say that Roslund and Hellström was one of them.

The problem with the Swedish crime novel was that it needed broader appeal. To succeed, the whodunnit’s “who” would have to be supplemented with the “what” and “how” of the detective novel and the “when” of the thriller. At least, that’s how I was thinking about it when I—an investigative journalist who had dedicated his life to exploring the nature and consequences of violence—tried to develop a new way to grapple with this through fiction. It was around this time that I met Börge Hellström, an ex-criminal who had founded a nonprofit organization that rehabilitated former prisoners. We immediately clicked as people and as storytellers, agreeing that we would work together and use our respective backgrounds to write differently.

They would be fiction, but based solidly on fact. The goal would be to entertain, but at the same time give the reader real insight into the worlds we had so much knowledge about and which we had experienced firsthand—Börge as a criminal and I as an investigative journalist.

We would write the books as ensemble works, always changing perspective, never letting a single character dominate the story from start to finish, and always making sure the motivations of the criminals are as interesting, compelling, and clear as those of the investigators.

We would incorporate the social criticism that “normal” literature in our country at this time had laid aside. For conveying these sorts of messages, the mystery genre was lying unused, but we appreciated that the detective novel could be the perfect way to simultaneously entertain while holding up a mirror to society.

Our primary aim was always to entertain—above all, story, story, story—but our vision of a new form, where fiction and fact shared the page to reflect the world around us, was born.

Together, we formed a dual entity that wrote about crime in a collaborative, mission-driven way, at a time when most authors did not work like this and most publishers were not interested in publishing books by such partnerships. It was so unusual that when I decided that, in order to communicate our partnership more forcefully, we would remove our first names from the book jacket—do away with “Anders” and “Börge”—Sweden’s dominant online retailers declared that it was not possible, that their computer systems simply could not manage two surnames in a space where there was only supposed to be one.

This is why the first Roslund and Hellström book actually arrived in bookstores featuring both names in full: Anders Roslund and Börge Hellström. But then the book became a major success among critics and readers, winning the Glass Key for the Best Nordic crime novel, and the e-tailers changed their computer systems to accommodate our double identity.

Today, as a consequence of our success as a writing duo, I am pleased to report that there are many more such partnerships in the Swedish crime scene, and I even hear from Norwegian and Danish journalists that we helped start the trend in our neighboring countries.

After the publication of that first book, The Beast (released in English as Pen 33), I was invited to discuss the sex crimes it depicted—and the laws and policies related to them—with our then Swedish Minister of Justice. After the second book, Box 21—about the sex trafficking of young women brought to Sweden from the Baltics and released at a time when both the Swedish authorities and the general public believed such things could not possibly be happening right under their noses—I was asked by the government to travel around the country to discuss the issue. After the fourth book, The Girl Under the Street, about young homeless girls living in a country that denied their existence, Swedish authorities were forced to admit for the first time that this really was a problem and to commit funds from the next budget to address the issue.

It was after the publication of our sixth book, Two Soldiers, that I got that mysterious call about sitting down for a cup of coffee with the prime minister.

Prime Minister Fredrik Reinfeldt was then at the end of his second term in Sweden and, along with German Angela Merkel, was the longest-serving EU national leader. We sat with him in his office at Rosenbad, where the coffee was good and the cinnamon rolls were fresh. The prime minister explained that he had read all of our novels, and that while he understood they were 50 percent fiction, they had nonetheless influenced his political thinking. The prime minister explained that he would follow in our virtual footsteps over the coming months to learn even more about Swedish crime and the driving forces behind it.

When we were saying goodbye, Reinfeldt put his hand on my shoulder and pointed down to the floor. “You know there’s no tunnel there, right?” He was referring to a tunnel that, in our fifth book, Three Seconds—which became a New York Times bestseller in the United States and is currently being filmed in Hollywood—is used by a criminal infiltrator to secretly exit the government office. “I know,” I said, looking back at him. “That tunnel is in the 50 percent fiction category!”

A few weeks later I sat at home watching as the prime minister gave his annual television address to the nation, a broadcast dedicated to Roslund and Hellström. The prime minister quoted from and summarized the plots and underlying messages of our novels. He stressed to the television viewers that he had been inspired by them to search for solutions to the problems of Swedish crime.

I was so proud—of us, but also of the Swedish crime novel in general.

No matter what politician I personally vote for, or which ideology I lay claim to, it is an honor to have played a small role in bringing the genre of the Swedish crime novel to a position of such influence. Our original ambition had been both to entertain and to influence, and now here was confirmation at the highest level that our vision had been realized.

My writing colleague, Börge Hellström, died in February. Cancer won in the end. But books live beyond their authors. They continue to be read, and to influence. What we created exists in the world and will continue to mean something—even after I too am gone. Of course, it goes without saying that now I write alone, but what hasn’t changed is that I write with the same goals and about the same literary universe that Börge and I created. Because of the readers we gained over the years, this universe is not just our creation anymore, or just mine—it is now a creation shared with, and given life by, many others.

Sue Grafton from A to Z 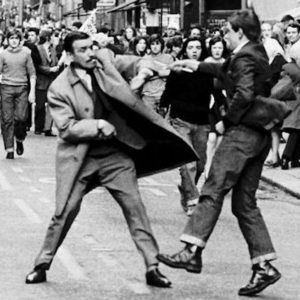 Few cities come with a reputation as hard as Glasgow’s. It’s the home of the “Glasgow Kiss” (a forceful head-butt...
© LitHub
Back to top