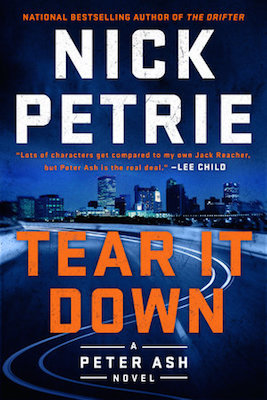 The following is an exclusive excerpt from Tear It Down, the latest thriller from internationally best-selling author Nick Petrie featuring veteran and amateur sleuth Peter Ash. In the following passage, four young men prepare for an amateur heist that’s bound to go wrong.

Coyo had found them an old four-door Buick Skylark, janky as hell with the maroon paint faded and peeling off the hood and roof. The interior smelled like old piss and mouse turds. The first thing they did was roll the windows down as far as they could go.

Eli climbed into the front passenger seat. The engine had something not quite right, a high whine in D minor under the regular noise. “This the best you can do?”

“Don’t be complaining ’less you can steal your own car,” said Coyo as he pulled away from the curb.

The steering column was broken open where the key was supposed to go. Wires dangled exposed, bare and twisted together.

They stopped behind a boarded-up building and got out of the car as Anthony dug into the tool bag for the white disposable coveralls he’d bought at the paint store. They pulled the coveralls over their clothes, but not all the way. They tied the coverall arms around their waists, like a sweatshirt you took off because you got hot.

And they were hot on the warm spring day, the coveralls made from some paper-plastic material that held in the heat, but that wasn’t why they didn’t put their arms in the sleeves. Just like stopping here where nobody could see them get dressed, it was part of last night’s plan. Eli didn’t want anyone in the neighborhood to see four black boys driving around in white painter suits.

Somebody might connect that sight to security-camera footage on the evening news.

Anthony handed out the gloves and the masks and the little paper hats. After they’d put on their gloves, Coyo passed out the guns. “Fingers off the triggers,” he said. “You know how they work, right? Any questions?”

Eli examined the rusty little revolver with the tape-wrapped grip. Something you could throw away and not miss, he thought. He looked at the other boys and saw that their guns were no better. Cheap and disposable, none of them shiny. He found the lever to open the thing that held the bullets. Every hole was filled.

His stomach churned. He’d handled guns before, had shot them, too, but it was just for fun. Showing off, making noise.

His stomach churned. He’d handled guns before, had shot them, too, but it was just for fun. Showing off, making noise… This was different.

Once they hit the road again they were quiet, feeling the weight of what they were about to do. The only sounds were the engine noise, the discordant notes of the tires on the road, and Skinny B giving directions from the back, watching the map on his phone.

Coyo took the circular ramp to the highway at speed, and the force of the turn pushed them sideways in their seats. The wind battered them through the open windows, the smell of the warming day rich in their noses. Eli looked out at the city flying by from the height of the road. He couldn’t remember the last time he’d ridden in a car. Mostly Eli stayed local and walked.

The trip was only twenty minutes but it felt like a different country when they turned the tight loop that dropped them onto Germantown Parkway, a concrete boulevard lined with acres of asphalt parking lots almost empty at that still-early hour. On the far side stood neat buildings of brick and glass, the signs crisp and bright. Green plants in long rows or little islands. This was where the good stores were, Eli thought, for people with money in their pockets. People who could afford more than food and a phone, the bare necessities.

“Over there.” Skinny leaned over the seatback, pointing. “By that sign says Macy’s. See the door?”

“Not yet.” Eli’s stomach was not getting better. “Circle around, I want to see all of it.”

Coyo looked at him.

“What if there’s a damn SWAT team at some donut shop on the far side? We need to see all of it.”

Coyo nodded and thumped an elbow into Eli’s chest, but not hard. “This why we need you, Ellison.”

He stuck to the road instead of cutting across the empty parking lots, all of them very aware of the little unmanned police trailer with its security cameras. Around the wide blank block of the Macy’s, then what looked like loading docks with semi-trailers backed up to the building. After Sears and another police trailer, the road looped away and back toward something called Malco with a row of Dumpsters lined up outside.

“It’s a movie theatre,” said Anthony. “I’ve been to the one by Overton Square a few times.”

Sometimes Eli watched TV at the Lucky, if he got there early or stayed late. Sometimes Saint James let him sleep in a booth if it was cold. He’d never been to the movies.

“Okay,” he said. “That’s where we’re working today. If anybody asks, police or anyone, we’re working at the movie theatre. We’re late, we’re a little lost, we went in the wrong entrance. Got it?”

Murmurs of agreement. “Say it. Each of you.”

They repeated it back to him, one by one.

Past the theatre, a big round glass entrance glittered in the sun. At the far end of the mall, they curved around Dillard’s with its arched green entryways. Around JCPenney, then back where they started, on the outer edge of the parking lot.

The pit in Eli’s stomach got deeper, like it had a mind of its own, and was not in agreement with the rest of his body.

He couldn’t believe he was doing this. But here he was.

“Stop up there,” he told Coyo, “while we get ourselves straight.” They already wore the pale latex gloves. They shouldered into the upper part of their coveralls, raised the plastic zippers to their necks. They pulled the white paper painter’s hats down over their eyes and set the white dust masks across their faces. Then turned to look at each other in these ghost getups, four different shades of brown skin now almost completely covered with identical white. “Goddamn,” said Skinny B. “We some kind of badass space-age motherfuckers.”

Coyo pulled the car up toward the entrance and left it nose-out in the nearest legal parking spot.

Eli said, “Everybody got the plan?”

Eli’s stomach roiled and churned, like he’d swallowed a pair of live eels. “Okay,” he said. “No, dammit, wait.”

He pulled off his dust mask and hat with a single upward shove of his hand, then pushed open the door and leaned out to puke up his greasy Hardee’s breakfast. It burned hot in his throat, splashing red and chunky on the pavement. His gut clenched like a fist until he was empty. He spat and ran his tongue across his teeth and wished for water, but he didn’t have any.

“Okay,” he said. Feeling the jitter in his fingers, a wild energy in his legs. “Okay. Let’s go. Five minutes, in and out.”

From TEAR IT DOWN by Nick Petrie, to be published on January 15, 2019 by G. P. Putnam’s Sons, an imprint of Penguin Publishing Group, a division of Penguin Random House, LLC. Copyright © 2019 by Nicholas Petrie. 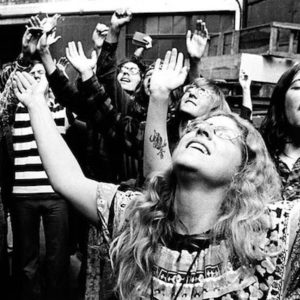 On Leaving a Cult and Discovering Thrillers Most kids dream of what they’ll be when they’re grown, dreams that cycle with the seasons and adapt with age, and eventually...
© LitHub
Back to top