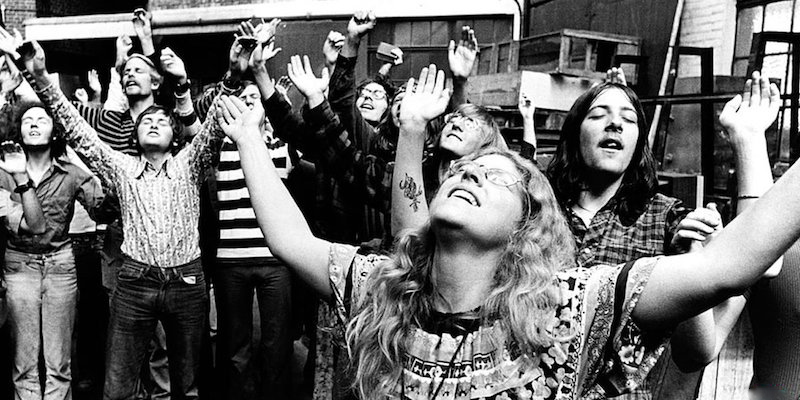 A Chance Encounter with a Ludlum Paperback Changed Everything

Most kids dream of what they’ll be when they’re grown, dreams that cycle with the seasons and adapt with age, and eventually the unicorn catchers, dragon tamers, and pollywog farmers grow into our veterinarians, firefighters and environmental systems managers.

As a kid, I never dreamed like that. For me, the idea of becoming anything was a blank space.

I knew doctors and lawyers and accountants and office managers existed, but professions were for people out there.

The world I was born into was different. We saw what others couldn’t, that these times were the end of days. Our purpose was to warn the world of coming destruction and save as many as would listen. For us, persecution and tribulation were always around the corner, and only by following the prophet ordained by God to lead us through these perilous times would we be strong enough to make it through to eventual martyrdom.

In a world like that there was no room for long term planning because the only thing to plan for was the life that came after this one.

The adults, those who joined of their own free will, certainly never expected to see old age as they have. By their reasoning, as far as their kids were concerned, any education beyond functional reading, writing, and math was a waste of time. So, in lieu of schooling, I spent the bulk of my childhood and adolescence in communes, cooking, cleaning, and caring for younger children, or out on the streets begging for money on behalf of the cult leaders.

Surprisingly—or not, if you’re familiar with the genre—the apocalypse didn’t come as scheduled. True devotees dug in deeper, the belief system got crazier, I got old enough for logic to start asking uncomfortable questions, and eventually the pain of staying outweighed the fear of the judgement and punishment that awaited those who abandoned God for a world of unbelievers.

It was hard, those early years of freedom, trying to grab a toehold without an education, or job history, or any of the social support that most suburban families take for granted, and it was within that struggle that a chance encounter with a coverless Robert Ludlum novel at a garage sale sparked a chain of events that led to a spur-of-the-moment decision that compelled me to attempt a novel of my own.

By odds and expectations, I should have never have finished that book much less been published, but that story, which launched onto the New York Times bestseller list and sold in over twenty languages, completely altered the trajectory of my life. Even now, all these books later, when I think about the tiny twists of fate that led from there to here, I have to stop and catch my breath.

Publication came with a whirlwind of attention I was wholly unprepared for, most of it good, but also comparisons—assumptions that conflated me with my character and my life with the storylines—and that left me bewildered and increasingly frustrated. How anyone could confuse me with this fantasy baffled me. I was writing fiction after all, and not just fiction, but visceral, violent, boots-on-the-ground action with an over-the-top protagonist fashioned after Jason Bourne who had skills I could, literally, only dream of.

But as I listened I began to understand. To those who fell into my stories the way I’d fallen into Robert Ludlum’s stories, these characters were so different and felt so real that they had to have come from something tangible. So, if doctors wrote medical thrillers and retired Special Forces wrote military thrillers, it was only natural to look to me and to my different kind of life as the source material for this different kind of thriller.

Article continues after advertisement
The furthest thing from my mind was transposing the abuse, trauma, and neglect of my childhood onto characters I loved but what did bleed through was the authentic struggle of a Third Culture Kid trying to fit into a world she was expected to belong to, but didn’t, and never would.

The more I thought about it, the more I realized they weren’t wrong. It’s just that the “different” that captured their imagination wasn’t what they thought it was. The furthest thing from my mind was transposing the abuse, trauma, and neglect of my childhood onto characters I loved but what did bleed through was the authentic struggle of a Third Culture Kid trying to fit into a world she was expected to belong to, but didn’t, and never would. That was very present and very real.

Third Culture Kid is a term used to describe the children of diplomats, missionaries, military, teachers, executives, and such who spend their formative years outside their parents’ original culture. So they have parents from one country (two if the parents are different nationalities), but grow up in a second country (multiple second counties if the family moved a lot), and thus end up neither fully identifying with their parents’ culture nor the culture(s) in which they live, thus essentially becoming their own amalgamated third culture.

In my case, I was born in the United States to American citizens and carry a United States passport but I didn’t grow up here—didn’t absorb the social norms, have none of the pop culture awareness everyone else my age acquired through osmosis and none of the shared experiences—I grew up in communes, moving often from one to the next, cut off from my parents’ culture in a trek that crisscrossed the globe and I am, essentially, a stranger in my own country. That sense of being a transplant stays with me still. No matter how long I live in any one place, or how adapted I become, there’s a part of me that will always feel like I don’t belong—and I’m okay with that.

This is part of my identity. I embrace it for what it is.

It also permeates everything I write.

The Informationist, the story birthed out of that spur-of-the-moment decision to write a book, introduced Vanessa Michael Munroe, chameleon and information hunter. She’s independent, lethal and not at all what you’d expect from the daughter of missionaries. To some readers, that aspect of her history is a thinly veiled reference to my own and you can still find reviews explaining that character was fashioned after author and that both were born into a religious cult.

Truthfully, I never identified with Munroe’s religious upbringing. Giving her missionary parents was always a matter of practicality. Here I had a young American woman who’d grown up in Cameroon, a predominately Francophone country on Africa’s west coast, and was now returning to the region, but there isn’t much of an American expat community in Cameroon, or at least there wasn’t at the time I was there. Most of the western foreigners who stayed long enough to bring their families tended to hail from Europe, not the United States and so the most realistic, plausible explanation for why someone her age would have been born in Cameroon and lived there as long as she had was that she had missionary parents.

The variance between what, to me, seemed obvious and without need of further clarification compared to what those with a different cultural awareness read into it is one small example of the type of disparity that can leave a Third Culture Kid feeling disoriented in their own homeland. This particular instance also happened to be laced with irony because the one thing I actually did identify with was the struggle to adjust to a white bread suburban life.

It was that clash of culture that threaded through The Informationist and made the story what it was and, more subtly, made subsequent stories what they were. Once you know where to look, you find Third Culture Kid backgrounds in so many of the characters. That always made more sense than not. Hardcore international thrillers deserve a globally diverse cast. But creating characters that veer too off the familiar path also carries a bit of a risk and so, when the time came to start a new series, I considered heading in a more traditional direction.

I figured at the very least no one would ever confuse me for a coroner or detective.

But the thing was, all the upheaval and trauma that had made my life such a struggle had also given me the ability to bring totally out there and yet strangely believable characters to life. To turn my back on that would be to turn my back on what made my stories uniquely mine. And so Liars’ Paradox was born, and Jack and Jill came to be, twenty-six-year-old feuding assassin twins raised on the run by a paranoid and possibly delusional mother who may or may not have been a deep cover CIA operative in her former life.

These two are unlike anything else available in today’s thrillers. And, because they are so different, and because my life has been so different, it’s not surprising that questions about how much of me ended up on the page have resurfaced. This time though, I know exactly where that’s coming from. There are so many brilliant authors, writing incredible pulse-pounding thrillers, but only someone who lived the life I’ve lived could write a story like this.

I fully embrace that, better or worse, for characters like these there’s no one else but me.

Taylor Stevens is a critically acclaimed, multiple award winning, New York Times bestselling author of international thrillers; her latest book, Liar's Paradox, is now out from Kensington Books. Best known for high-octane stories populated with fascinating characters in vivid boots-on-the-ground settings, her books have been optioned for film and published in over twenty languages. In addition to writing novels, Stevens shares extensively about the mechanics of storytelling, writing, overcoming adversity, and the details of her journey into publishing at taylorstevensbooks.com. She welcomes you to join her. 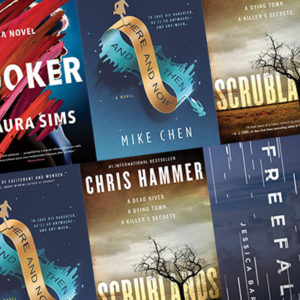 Breaking into the crime game isn’t easy, but every month, a few brave and talented souls make a go of the mystery and thriller...
© LitHub
Back to top