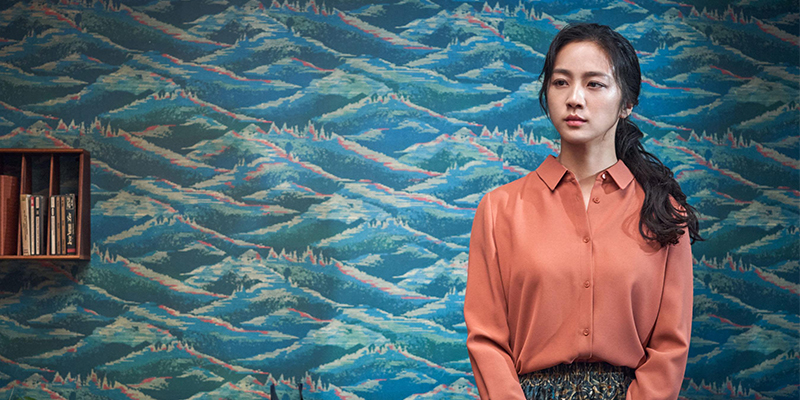 Here are the rules for our selection. As usual, all films considered had to be full-length feature films, released (in theaters or on streaming services) in the United States during the 2022 calendar year. One of the most annoying things is that several of the year’s best crime films—Australia’s Nitram and France’s Happening (not to mention the best overall, non-crime film, Petite Maman)— were technically 2021 releases and are therefore not eligible for this roundup. But the good news is that this list considers international films as well as domestic ones, so I get another chance to go on about Decision to Leave.

And, as always, we define “crime” pretty widely, to include all illegal activity from theft, to murder, to cons, to mob stuff, to prison escapes, to frauds, etc, etc. As always, there are no war movies, because that would be too wide a lens flare for us. (This rules out Athena, and for this I am sorry.) This list is not ranked, as is the case with all our end-of-year content, because how could we put ourselves through something so agonizing? 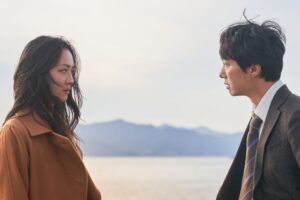 Park Chan-wook’s Decision to Leave is a near-perfect neo-noir: a spiraling detective story laced up with a burning star-crossed romance between a straight-laced insomniac detective and a beautiful woman suspected of murdering her husband. It’s a modern Hitchcockian masterpiece. If this film doesn’t win the Academy Award for cinematography, I’m going to fling myself off a cliff. 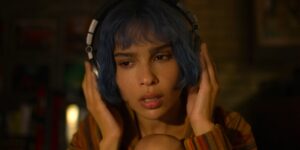 Zoe Kravitz plays an agoraphobic tech worker in this clean, tight Steven Soderbergh film set just after the pandemic. Angela (Kravitz) works for a company that makes Amazon Alexa-like devices (the virtual assistant’s name is Kimi), and, when listening to recordings of people’s requests to assess the AI’s responses to them, plays a file that seems to be a recording of a murder. Part Rear Window, part Blow Out, part-something new, it is a propulsive, compact thriller that will entertain both you and your Amazon Echo Dot. 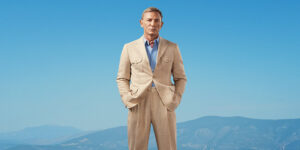 Glass Onion: A Knives Out Mystery

This is the big one—the Mona Lisa of 2022’s crime films. I’m wincing at this metaphor, but anyway… after a torturous hiatus, the drawling gentleman sleuth Benoit Blanc (Daniel Craig) is back on another humdinger of a case, and man, is it a delightful time. Glass Onion is entirely its own mystery—it is different in almost every way (setting, scope, FORM) from Knives Out except in the upright nature of the detective himself. The film, which is a big nod to the film The Last of Sheila, takes place in Greece—specifically a tiny Greek island owned by a vapid tech billionaire named Miles Bron (Edward Norton), to which he has invited a coterie of old friends and their guests: a washed-up model (Kate Hudson), her stressed assistant (Jessica Henwick), a Type-A politician (Kathryn Hahn), a worried scientist (Leslie Odom Jr.), a gun-toting right-wing social media influencer (David Bautista), his girlfriend (Madelyn Cline), and a steely former collaborator (Janelle Monáe). And they are all there for a murder mystery party. Let the games begin! 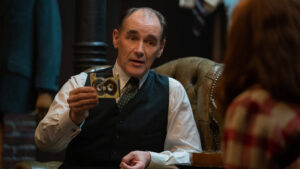 Man, Mark Rylance has had a busy 2022. In this trim, stylish movie set in 1956 Chicago, he plays an English tailor (technically, a cutter) who is approached by a group of mobsters and forced into a dangerous scheme. Points because it all takes place in one dangerous night, even MORE points for the pun of the title. 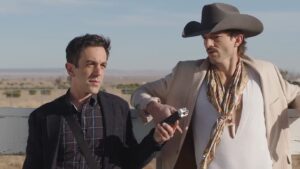 B.J. Novak’s Vengeance, a movie he wrote, directed, and stars in, is extremely smart—maybe too smart for its own good, at times. It is the story of a snobbish NYC-based writer looking to break into the world of podcasting who travels to Texas after a woman he hooked up with once is found dead. He decides to make a podcast about the investigation that frames cultural differences between the North and South. And the movie is a fascinating study of what might compel even the most detached, exploitative, “intellectual” person to commit an act of vengeance. Plus, it features an exceptional performance from Ashton Kutcher. 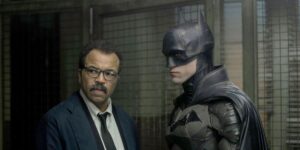 SPEAKING of “vengeance”… I know there are a lot (a LOT) of Batman movies out there and some are really fantastic, but Matt Reeves’s new film is my favorite of them all, and one of the most entrancing films of this year. Robert Pattinson’s Batman is first and foremost a detective, and watching him and Jeffrey Wright’s Lt. Jim Gordon buddy-up to solve a mystery in Gotham is a nonstop delight. There is a lot of wonderful insight into Bruce Wayne/the Batman’s psychology that lines him up neatly with the film’s main villain, the Riddler (Paul Dano). The Batman is reviled by many as an outsider, a “freak,” and so is the Riddler, who simply wants a friend underneath it all, and thinks he’ll find it in a fellow vigilante. 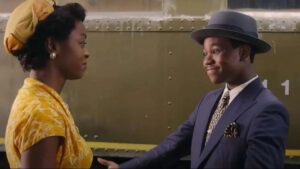 Chinonye Chukwu’s Till is about the brutal murder of the fourteen-year-old Emmett Till in 1955, and the fight of his incredible mother Mamie to achieve justice for him and to clarify the murder as a racist hate crime bolstered by white supremacist regimes in America. It is one of the best-made films of the year, an exquisitely-crafted, and searingly emotional period piece that manages to be hyper-relevant and is entirely anger-inspiring. And Danielle Deadwyler, as Mamie Till-Mobley, is nothing short of incredible. The strength and rage in her performance, all channeled into a magnetic power… absolutely astounding. 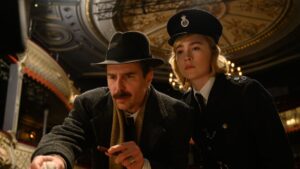 See How They Run

See How They Run is a charming whodunnit set on the night of the one-hundredth West End performance of Agatha Chrsitie’s play The Mousetrap, in 1953. But it doesn’t simply hoist The Mousetrap as a proscenium for its own mystery—it stages a mystery that is very much about the nature, history, and production of The Mousetrap. It’s also an amusing buddy-comedy, between the two detectives thrown together to solve the murder: D.I. Stoppard (Sam Rockwell) and W.C. Stalker (Saoirse Ronan). Ronan doesn’t get to be “funny” often, but she should do it more. She’s wonderful. 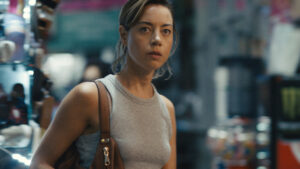 2022 was also the year of Aubrey Plaza and cheers to that! This is a sharp, gripping thriller about a young women saddled with a heap of student debt who, stuck in the gig economy and desperate to get out, inadvertently starts working for a credit card fraud ring. All too real, man. 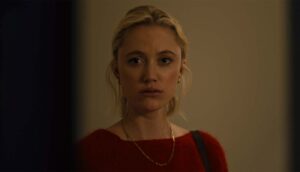 No, this is not The Watcher, the incompetent Netflix series adapting that one article in The Cut. This is Chloe Okuno’s gutting, sensitive, all-too-real movie about a young woman who discovers that she has a stalker. When Julia (an amazing Maika Monroe) movies with her husband to Bucharest, she thinks that the man who often stares out at her from the apartment across the street could be the serial killer who has been decapitating women around the city. 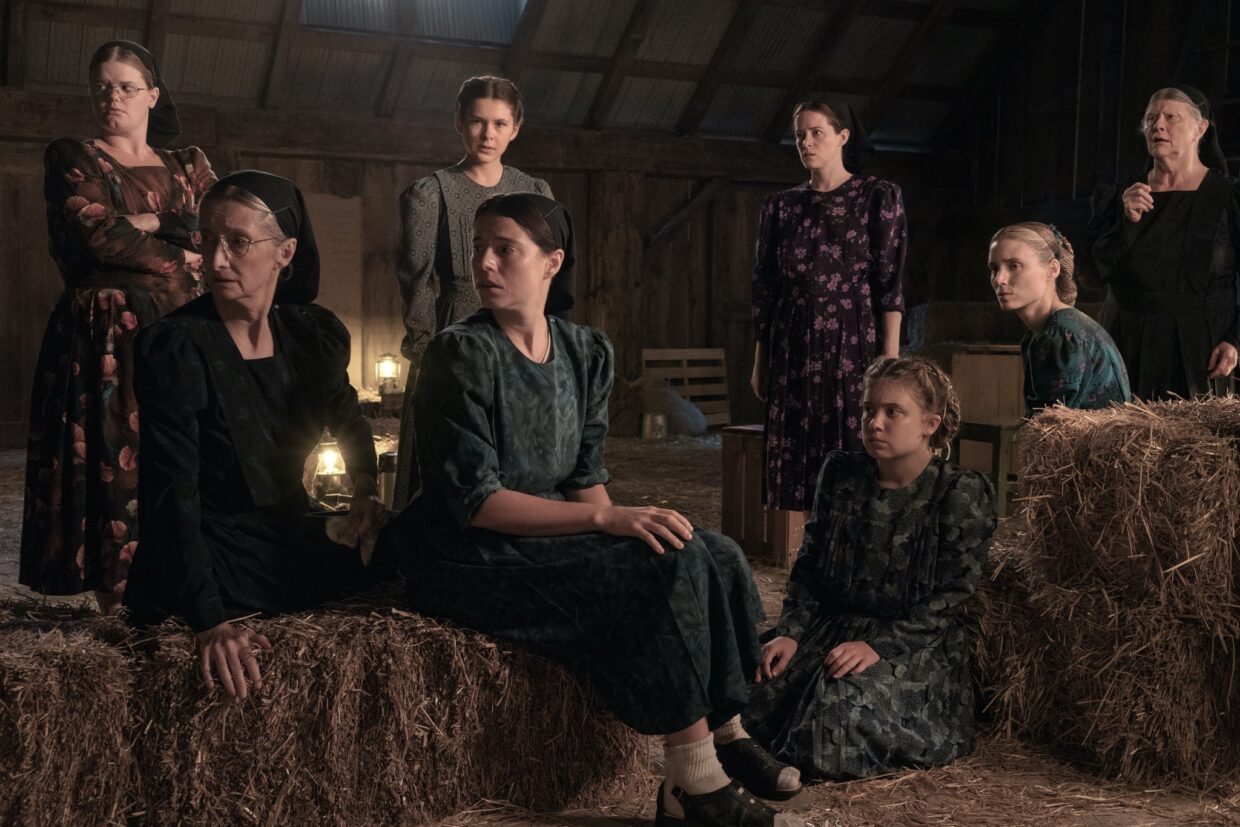 Sarah Polley’s adaptation of Miriam Toews’s somber, charged novel about women in a Mennonite community who collectively gather in the hayloft of a farm to address the systemic sexual abuse perpetrated upon them by the men of the colony, is riveting and crammed with impressive performances from Rooney Mara, Claire Foy, Jessie Buckley, Frances McDormand, Judith Ivey, Sheila McCarthy, Ben Whishaw, August Winter, Michelle McLeod, Kate Hallett and Liv McNeil. It is a true ensemble film and feels often like a play—a brave and compelling story about women who decide not to accept what they are told they must. 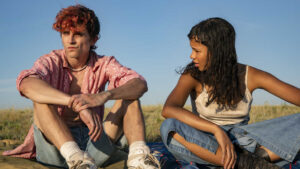 An adaptation of Camille DeAngelis’s recent novel, Luca Guadagnino’s teenage cannibal road movie Bones and All, is in my opinion, one of the most fascinating films of the year. It is a spooky, lonely fable about two young runaways (who happen to have inherent cannibalistic urges) wandering together through the impoverished backwaters of 1980s Midwest America together, trying to find a shred of community after feeling alienated from mainstream society, and dealing with loneliness, guilt, and self-loathing. And it features an unrecognizably scary Michael Stuhlbarg. 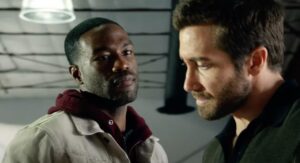 I’m not the world’s biggest Michael Bay fan, but even I have to hand it to him for this movie’s soaring technical effects; the drone-based camerawork in this movie is a real formal game-changer. Yahya Abdul-Mateen II is a war veteran who needs to pay for his wife’s medical bills and so enlists the help of his brother Jake Gyllenhaal, a slippery career criminal who instead suggests they should pull off a bank heist, robbing $32 million. >ambulance noises< 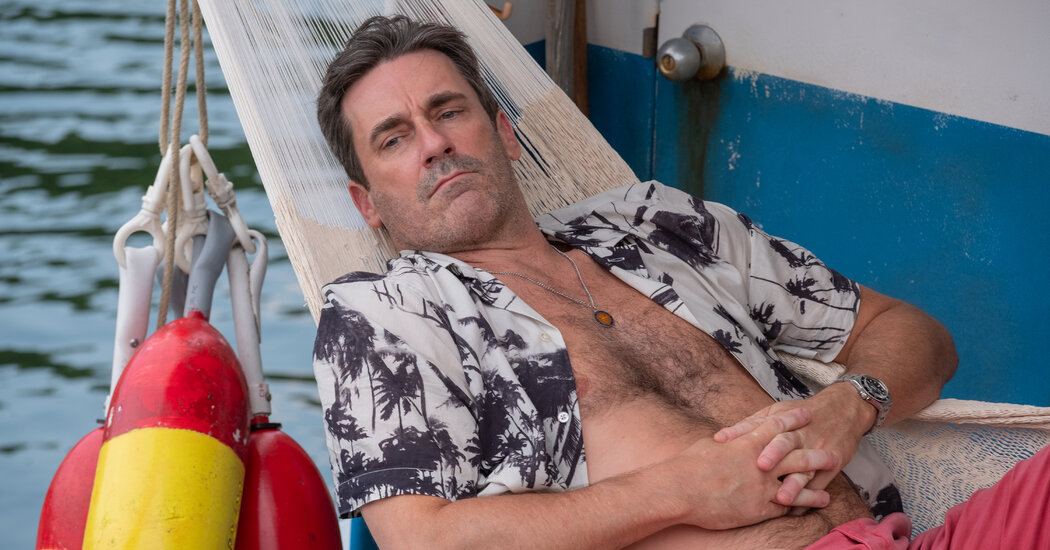 Confess, Fletch is a movie of epic coolness and smoothness featuring Jon Hamm in his best role in a long time. An adaptation of Gregory Mcdonald’s novel from 1976, it is a wisecracking but tight mystery about an art heist in Italy and a murder in America (Boston), and the suave-but-goofball American ex-journalist waltzing through the investigation. On Twitter, Dan McCoy noted that “In another era, Confess, Fletch would be one of those movies that became a beloved classic by stumbling over it on TBS on a Saturday over the course of several years,” and that is exactly right. It’s the kind of movie you watch at 4 pm on a weekend. We need more movies like this. And there’s going to be a sequel! GOD BLESS US, EVERY ONE. 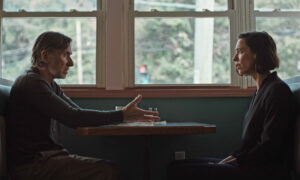 I feel like no one saw Resurrection, an engrossing, chilling thriller starring Rebecca Hall and Tim Roth, and this is a crime. It might seem somewhat standard in plot—it is about a woman whose life is upended when a figure from her past returns—but it is punched up by fantastic performances: Roth’s sinister calmness and Hall’s detonating desperation. She also gives maybe the single best scene performance of the year: a seven-minute, one-take monologue that she delivers with her entire face. Incredible. 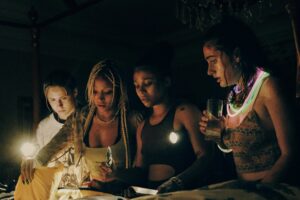 Maybe you’re not interested in extremely well-made parodies of Gen-Z online culture, and maybe you are. But it would still be worth your time to watch Halina Reijn’s Bodies Bodies Bodies, about a group of narcissistic zoomers stuck in a mansion together during a hurricane, playing a murder-themed party game that somehow becomes real. The kids start to suspect each other, in ways that provide ample opportunities to satirize the “toxic” fake-woke culture permeating the zeitgeist and wielded by the most privileged among us. 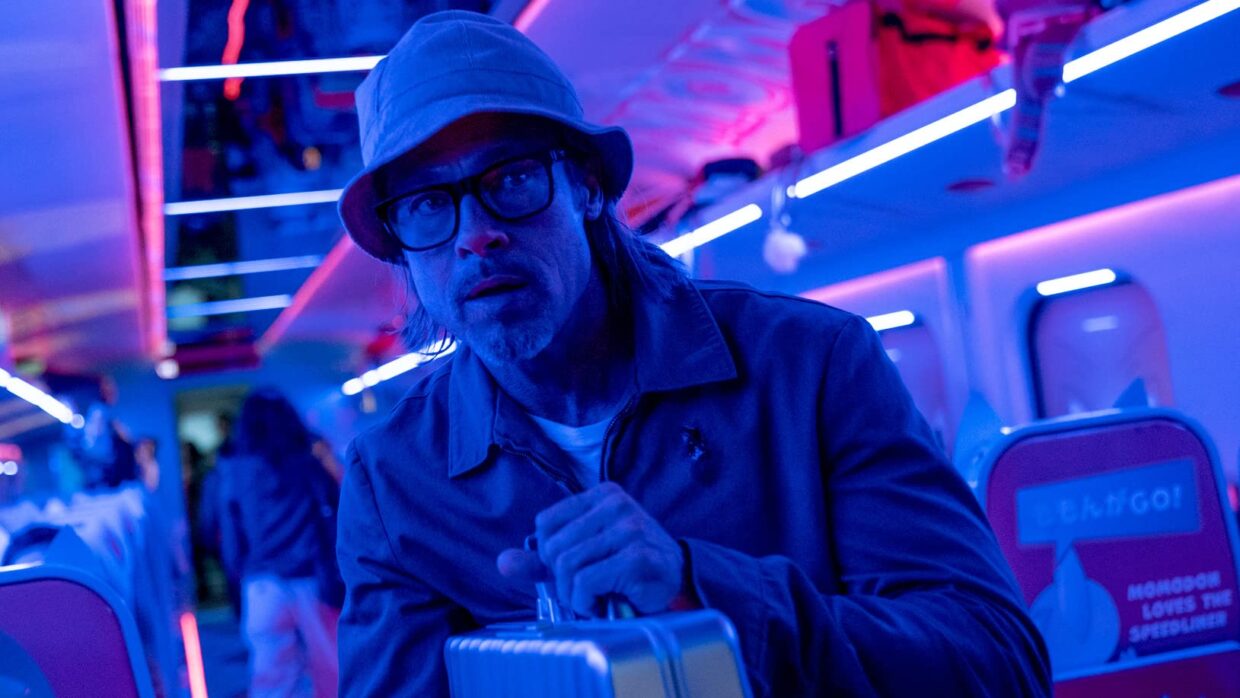 I know that some people didn’t like Bullet Train. Look, I’ll even say upfront that Bullet Train suffers from the Deadpool-ification of action movies—it’s a little too crass, too irreverent, too stupid in places. But it’s also one of the most fun times I’ve had at the movies, so much so that I went to see it three times. Some days, you want to watch a movie that’s a psychedelic head trip and also a complicated, bottled-up action movie, and also a funny and heartwarming story about relationships. It could have been retitled “Punch Buggy” and that would have worked with the vibe. It’s like if the Rainbow Road setting on Mario Kart had Matrix-inspired fight scenes and also Aaron Taylor-Johnson and Hiroyuki Sanada. It’s not a faithful adaptation of Kōtarō Isaka’s contained, pressure-cooker novel. But it’s the kind of movie you will scream-laugh too. Which is a thing that people need sometimes! It’s on Netflix now, so happy holidays. 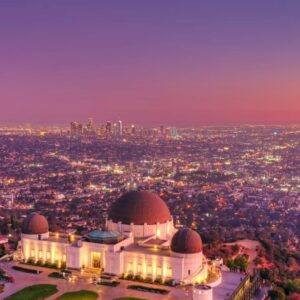 When I first moved to LA, I felt like I was in another country – and sometimes another planet.  There were red-tiled Spanish...
© LitHub
Back to top