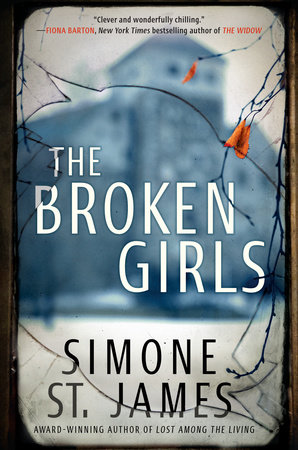 The following is an exclusive excerpt from The Broken Girls, the new novel from author Simone St. James. Her latest explores female friendship and the ghosts of the past. In the following scene, a journalist with mysterious connections to an abandoned orphanage learns of plans to restore the estate.

Fiona glanced up and watched him. It was hard not to, she had to admit. Jamie Creel of the Barrons police, son and grandson of Vermont police chiefs, had dirty blond hair, dark blue eyes, and a scruff of beard on his jaw that grew in honey-gold. He was younger than Fiona—twenty-nine to her thirty-seven—and he moved with easy grace as he huddled into his coat against the wind.

“Were you busy?” Fiona asked as he came closer.

He shrugged. “I was typing reports.” He had left off his hat, and the wind tried to tousle his hair. He stopped a few feet from her picnic table, his hands in his pockets and his legs apart, as if braced.

“I came to apologize,” she said.

He raised his eyebrows. “For what?”

“For freaking you out last night. For leaving.”

His eyes narrowed. “You’re not actually sorry,” he observed.

He didn’t answer, but gestured to the files in her lap, where she held a hand to them to keep them from blowing away. “What’s that?”

“Files from Lively Vermont. I’m looking for a history of Idlewild Hall.”

Jamie’s posture relaxed and he scrubbed a hand over his face. “This has to do with last night, doesn’t it? Fiona, come on.”

“About the restoration, the new school.” She watched his face. “It’s a good idea.”

“Maybe for someone, yes. For you?”

“You couldn’t handle it last night,” he said. “You were a basket case.”

It had been sort of a strange episode, but she didn’t regret it. That trip to Old Barrons Road had shaken something loose. Idlewild had always loomed silently in the back of her mind, a dark part of her mental landscape. She’d done her best not to talk about it for twenty years, but talking about it out loud now was like bloodletting, painful and somehow necessary at the same time. “I’m better today,” she said, and she patted the table next to her. “Come sit down.”

He sighed, but he stepped toward the table. Fiona watched with the surreal feeling she still got sometimes when she looked at Jamie, even now. A year ago she’d had a bad night—lonely, wallowing in self-pity and grief for Deb—and had found herself at a local bar, drinking alone. Jamie had pulled up the stool next to her—handsome, muscled, glorious in a jaded way, a guy who looked like he’d been a college athlete before something had made him go as quiet and wary as a wild animal. Fiona had put down her drink and looked at him, expecting a line, waiting for it, but Jamie had taken his time. He’d sipped his beer thoughtfully, then put it down on the bar. Hi, he’d said.

There was more, but that was all, really—just hi. Two hours later they’d ended up in his bed, which had surprised her but somehow fitted her mood. She’d assumed it was a one-night stand, but he’d asked for her number. When he called her, she’d swallowed her surprise and said yes. And when he’d called her again, she’d said yes again.

It didn’t make sense. Cops and journalists were natural enemies; they should never have mixed. And in many ways, they didn’t. Jamie didn’t introduce Fiona to his colleagues or take her to any of their social functions. She never went inside the station when she wanted to see him during work hours, waiting for him outside instead. He had introduced her to his parents exactly once, a chilly conversation that was over in minutes. On her part, Fiona had brought Jamie to meet Malcolm, but only because Malcolm had insisted. He’d been worried when he heard his daughter was dating a cop, even though he never intruded in her love life. The meeting had been awkward, and she still had no idea what the two men had made of each other.

And yet Jamie’s job was part of the reason she liked him, as was the fact that he’d been born in Barrons and had it in his blood. With every relationship, she’d had the hurdle of explaining her past, explaining Deb, rehashing what had happened and why. Most men tried to be understanding, but Deb was always there, a barricade that Fiona couldn’t quite get past. She had never needed to explain with Jamie; he knew who she was when he approached her in that bar; his father had been police chief when Deb was murdered. She’d never had to tell him anything because he already knew.

So, despite the difficulties, it was easy with Jamie. Easy in a way Fiona was prepared to sacrifice for. He was smart, easy to be with, quietly funny. What he saw in her, she was less sure of, and she didn’t ask; maybe it was the sex—which was particularly good—or companionship. All she knew was that she’d rather amputate her own arm with a rusty hand saw than have the where are we going conversation.

Now he sat next to her on the picnic table and folded his long legs. “You want something else,” he said matter-of-factly. “Go ahead.”

“The Idlewild property,” she admitted. There was no point in prevaricating. “What do you know about it?”

“I only know what’s common knowledge.”

“Liar. You know everything. Start from the beginning.”

Idlewild had always loomed silently in the back of her mind, a dark part of her mental landscape…talking about it out loud now was like bloodletting, painful and somehow necessary at the same time.

Jamie’s father and grandfather had both been chiefs of police in Barrons. The Creels had been a vital part of this area for decades, and they knew every family in Barrons, from the richest on down. In a way that felt alien to Fiona, Jamie was dedicated to this place, and he had an intelligent brain that never forgot a detail when it came to his town. So she waited for him to call up the information from somewhere in his circuitry, and then he started talking.

“Let’s see. Idlewild was built just after World War I, I think, for girls who were veterans’ orphans. It passed into different hands over the years, but enrollment went lower and lower. The Christopher family bought it when the school closed in 1979.” He didn’t glance at her when he spoke the family name of her sister’s killer, so she knew he was absorbed in the history. “The Christophers were buying land like crazy around that time,” he continued. “They planned to be real estate barons, I guess. Some of the properties they bought were profitable, and others were not. Idlewild was definitely in category two.”

“Why?” Fiona asked. She knew some of this, but she let him talk.

Jamie shrugged. “Everything they tried fell through. Partners backed out, funding disappeared. They couldn’t get anyone on board. The school has always been rumored to be haunted, which sounds silly when you’re talking about a development deal, but I think the Christophers miscalculated. The fact is, Idlewild has always scared the people here. No one really wants to go near the place. The Christophers had other deals that were making them rich—or richer, I should say—so they eventually focused on those and let Idlewild sit as a white elephant.”

Fiona remembered Idlewild growing up—kids telling stories at sleepovers, teenagers daring each other to go onto the property after dark. She’d never really believed in ghosts, and she didn’t think any of the other kids did, either, but there was no doubt the abandoned remains of Idlewild Hall were unsettling. A crumbling portico, overgrown vines over the windows, that kind of thing. But for all its spookiness, it was just another place until the murder. “And then Deb died,” she prompted Jamie.

“That was the end of the Christophers here,” Jamie said. “Their years as the most prominent family in Barrons were over. After Tim was arrested, his father Henry started pulling up stakes almost right away. By the time Tim was convicted at trial, the family had sold off what they could and moved to Colorado. They’re still there, as far as I know.”

Fiona stared down at her hands. Deb had been so excited when she’d started dating Tim Christopher; he was tall, good-looking, from a rich and important family. Deb had never been happy as the child of middle-class intellectuals. “But they didn’t sell Idlewild.”

“They couldn’t. The buildings are so run down they’re nearly worthless, and the land isn’t worth much either. The crash in 2008 didn’t help. The family must have been pretty happy when this new buyer came along.”

“That I don’t know.” Jamie gave her an apologetic smile. “She’s not local—she’s from New York. I hear she’s an elderly widow with a lot of money, that’s all.”

“Dad says she’s a recluse. Her son handles all of her business.”

“Fee.” Jamie turned toward her, twisting his body so he could look at her. His knee brushed hers, and she tried not to jump. “Think about what you’re doing,” he said. “That’s all I ask. Just think about it.”

“I have thought about it,” Fiona said. She held up one of the files. “What I want to know is, why restore Idlewild Hall now? There can’t be any money in it.”

“Around here? You know as well as I do what the average salary is in this part of the state. Who is sending their kid to an expensive boarding school, one that has already required millions to rebuild? Margaret Eden can’t be financing everything by herself. If she has investors, who are they? How do they expect to make money?” Money talks had always been one of her father’s tenets as a journalist. Someone, somewhere, is almost always making money.

“You think there’s something else going on.”

“I think that the place is a money pit. Maybe she’s batty, or she’s being taken advantage of. Don’t you at least find it weird?”

He stepped off the table and stood facing her again. “All right,” he admitted. “It’s weird. And it’s probably a good story. And no one has covered it.” He looked at her triumphant expression and shook his head, but his features had relaxed, and she knew she’d convinced him. “Let me know how it goes when you track down Anthony Eden.”

“Anthony is the son?”

“Yes. They live in one of the town houses on Mitchell Place—the big one on the corner. You could have found all of this stuff out yourself, you know.”

“I know,” Fiona replied, and she felt herself smiling at him. “But it’s more fun to get information from you.”

“I have to go back inside,” he said. He caught her gaze, and there it was, the arc of electricity between them that never seemed to quit. Fiona felt the urge to touch him, but whoever was watching them from the station windows—and there was almost certainly someone—would never let him live it down.

“I’ll call you later,” she managed.

“Maybe,” he replied. He took a step back, then turned and walked toward the station, giving her a wave over his shoulder. As he put his hand on the door, he stopped. “Tell your father,” he said. “Don’t let him find out from someone else.” And then he was gone.

From The Broken Girls. Used with the permission of the publisher, Berkley. Copyright © 2018 by Simone St. James. 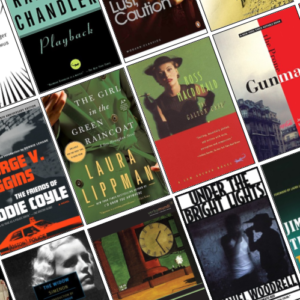 25 Classic Crime Books You Can
Read in an Afternoon “To say little and convey much”—that was how, in a 1949 letter to his publisher, Raymond Chandler began his defense...
© LitHub
Back to top