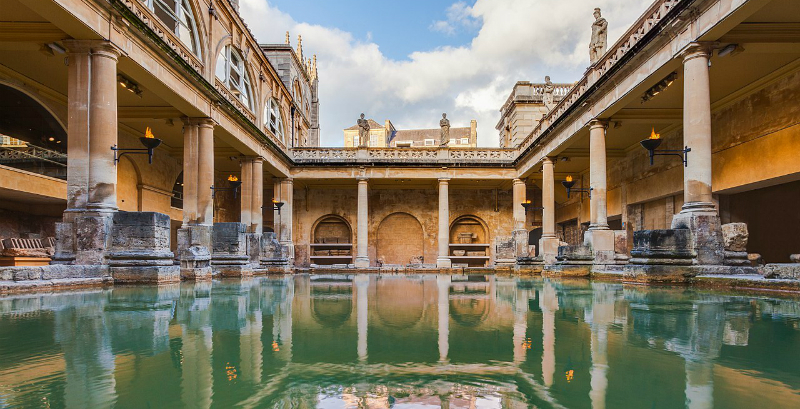 Things aren’t what they used to be in the city of Bath. The hot mineral water still gushes up from the springs just as it did it ancient times, but these days anyone foolhardy enough to plunge into the Great Bath in the town the Romans called Aquae Sulis is more likely to find dangerous bacteria than a miracle cure. Far safer to resort to the state-of-the-art spa across the road. Still, there is one way in which we do exactly as the Romans did in their bath house. The evidence is all over the floor of one of the pools, which sparkles with the coins flung in by modern visitors.

When the pool of the nearby hot spring was excavated in 1979, more than twelve thousand ancient coins came to light. Most had been thrown in during the time of the Roman occupation. Some might have been tossed in by the locals before the legions arrived. The urge to drop treasure into water goes back a very long way.

Other finds from the pool, though, are a sharp reminder that our ancestors were different from us. Scattered among the coins were dozens of little folded or rolled scraps of lead. On closer examination the scratches on them turned out to be writing.

The language is mostly Latin, and not easy to decipher. The writers rarely bothered to leave spaces between words, and they were largely strangers to punctuation. Some texts are deliberately written backwards. One of them might be in a Celtic tongue (but we have little to compare it to) and for years scholars unwittingly attempted to read another of them upside down. Many are just scraps, their adjoining parts still unexcavated or washed away down the drain. One or two offer rows of squiggles which seem to have been put there by people who knew what writing looked like, but who were a little hazy about how it was done.

One thing is clear, though—these are not good-luck offerings. They’re curses. They were flung into the water by the outraged victims of crimes who were asking Sulis Minerva, the goddess of the spring, to take revenge.

Sometimes all the goddess received was a list of names. Presumably she was expected to know what their owners had been up to, and what to do about it. We do, though, know what Velvinna, Exsupereus, Verianus, Severinus, Augustalis, Comitianus, Minianus, Catus, Germanilla or perhaps Jovina might have done. All of them were suspects in the case of the stolen Vilbia. Maybe whoever stole her was indeed punished by becoming “as liquid as water,” but it’s unlikely that we’ll ever find out.

A victim who had no suspects to offer usually reminded Sulis Minerva to spare no one from her investigations, “whether man or woman, slave or free.” Sometimes children were in the frame too—“whether boy or girl”—and once, “whether pagan or Christian.”

All this, along with the dramatic setting of a great temple by the hot spring, seemed like fine fodder for a historical crime writer in search of a location. Unfortunately when I began to delve deeper, the messages in the spring didn’t reveal the seething mass of wickedness that I’d hoped for—although Basilia might have disagreed. Anyone involved in the theft of her silver ring was to be accursed in blood, eyes and every limb, or even have all his or her intestines eaten away.

The theft of a ring didn’t feel like a solid enough base for anything more than a side-plot, though. And as for the theft of Vilbia…Roger Tomlin, the modern translator, points out that the name isn’t known to appear anywhere else. A “vilbia” may simply be an inanimate object with a name that nobody now understands.

Anyone involved in the theft of her silver ring was to be accursed in blood, eyes and every limb, or even have all his or her intestines eaten away.

The inspiration for curses elsewhere in the ancient world—the silencing of witnesses, the cursing of love rivals, or attempts to magically nobble another team’s racehorse—seem to be absent at Aquae Sulis. There’s one mention of perjury, but most complainants seem to be demanding justice for petty theft in the bath house—cloaks were a favorite target—and relatively small sums of cash. It’s hard to get as excited as poor Docimedis about the loss of his gloves, for which the thief should lose his minds [sic] and his eyes.

Although the subject matter of the curses may seem mundane to us, the tangle of religion and politics in the society that created them still resonates with us today.

The hot springs were a shrine before the legions arrived, but their official glorification really seems to have got going in the decade after Roman troops had marched west to wipe out Britain’s Druids, leaving the door open for a revolt in which Boudica threatened to snatch control of the province away from Rome altogether.

I like to imagine that once the Druids were dealt with and the rebellion was quashed, the Roman authorities set about the project of taming the main spring and building a grand complex around it as part of a post-war mission to win hearts and minds. The goddess Sulis Minerva, tactfully given one native name and one Roman one, would preside over a sort of combined tourist resort, holy site and health spa. Aquae Sulis was a showpiece, and it was important for the stability of this troublesome province that the attempt to fuse two cultures should succeed.

What, from Rome’s point of view, could possibly go wrong? Now that, it seemed to me, was the sort of pressure that could drive a story.

According to polymath Pliny the Elder, the Britons were notorious for their enthusiastic practice of magic, and he praised his fellow-Romans for trying to stamp it out. It’s possible to speculate that the Druids were massacred for political reasons, but they also fell on the wrong side of Rome’s shifting line between religion (good) and superstition (bad).

There may be an echo of this in the archaeology: the names on the curses are of ordinary people, many of them Britons. Native names are often given a Latin twist, but so far no curses written by Roman citizens have come to light even though we know they were living there—their names appear on local tombstones. Perhaps these members of a higher social class could afford slaves to guard their property in the bath house. If that failed, perhaps they had the resources to track down criminals and prosecute them.

One thing is certain—nobody would be able to call the police. It was not the job of the state to investigate crime. (This freedom is, incidentally, a matter of great joy for anyone writing about an amateur sleuth in the ancient world.)  A victim with little influence or cash might well resort to the sort of “no win, no fee” arrangement on offer from the goddess. Many simply promised to dedicate the stolen item, or part of it, to Sulis Minerva if she managed to retrieve it. With luck the thief might decide it was now too hot to handle and return it, as requested, to her temple.

Did these curses work? We live in a skeptical age and it’s easy to point out that many of the punishments—lack of sleep, infertility, problems with urinating or defecation—might occur anyway in the natural course of events, especially at a shrine that attracted the sick. Would an insomniac thief return the booty in the hope of a good night’s sleep? We don’t know, but we do know that people continued to fling curses into the spring for more than two hundred years.

Regardless of outcome, making a curse must have given a victim some feeling of satisfaction. Maybe it was like Hong Kong’s ritual of “beating the petty person,” where even today the sight of a hired expert smacking a shoe up and down on a paper tiger named after your enemy offers emotional release without any crime being committed against the victim. Closer to home, I can testify to the fact that I’ve never witnessed the sort of major fallings-out amongst crime writers that seem to occur in some other literary circles. Maybe that’s because if someone annoys us, we can employ the power of words and bump them off in our next novel.

Perhaps we’re not as far from the ancient world as we think.

Ruth Downie is the author of the New York Times bestselling Medicus, Terra Incognita, Persona Non Grata, and Caveat Emptor. Her latest novel is Memento Mori. She is married with two sons and lives in Devon, England. 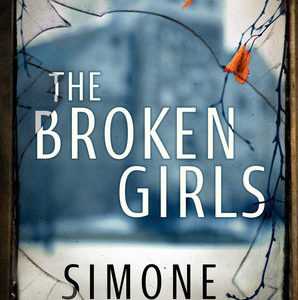 Fiona glanced up and watched him. It was hard not to, she had to admit. Jamie Creel of the Barrons police, son and grandson...
© LitHub
Back to top