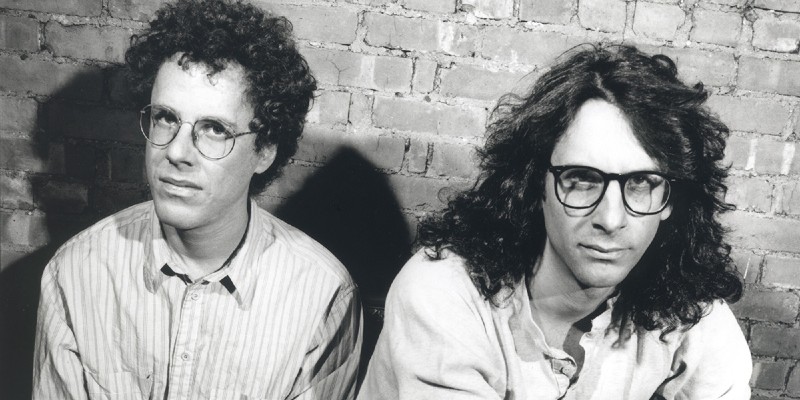 From Macbeth to Lebowski and Back Again

When recently discussing his forthcoming adaptation of Macbeth, director Joel Coen drew a direct line from William Shakespeare’s grand tragedy of power, murder and madness to the bloody business found in the pages of noir and pulp paperbacks:

“It’s interesting how Shakespeare sort of pre-figured certain tropes in American thriller and crime literature…which just had to do with, in crime novels, a story centered around a husband and a wife who plotted a murder. So that’s something that Shakespeare is obviously doing in Macbeth that you see echoes of in crime fiction, in American anyway, in the early part of the 20th century. That kind of fiction I used to read as a kid.”

Fitting, then, that Coen should finally get around to tackling the Scottish play, since those dark childhood favorites have proven so important to his work to date. Arguably, Joel and his brother Ethan have been the most prolific propagators of film noir of the last 30+ years, carrying the genre into the modern day through their violently macabre, ironically detached and thematically rich thrillers, several of which stand as feature-length pastiches, homages or straightforward adaptations of their literary influences.

The Coens have been paying direct homage to those influences from the word go, starting with their debut, Blood Simple (1984), which took its title from Dashiell Hammett’s genre-defining private eye novel Red Harvest (1929). The phrase, as coined by Hammett to describe his antihero’s tenuous sanity following a prolonged bout of killing—”if I don’t get away soon I’ll be going blood-simple”—perfectly summarizes not only the psychological state of its namesake film’s characters, it also operates as the cruel universal joke being played on them, as embodied during a hilarious set piece in which a desperate sucker attempts to wipe down a murder scene by mopping up a thick puddle of blood but only succeeds in spreading it further. Out, damned spot, indeed. 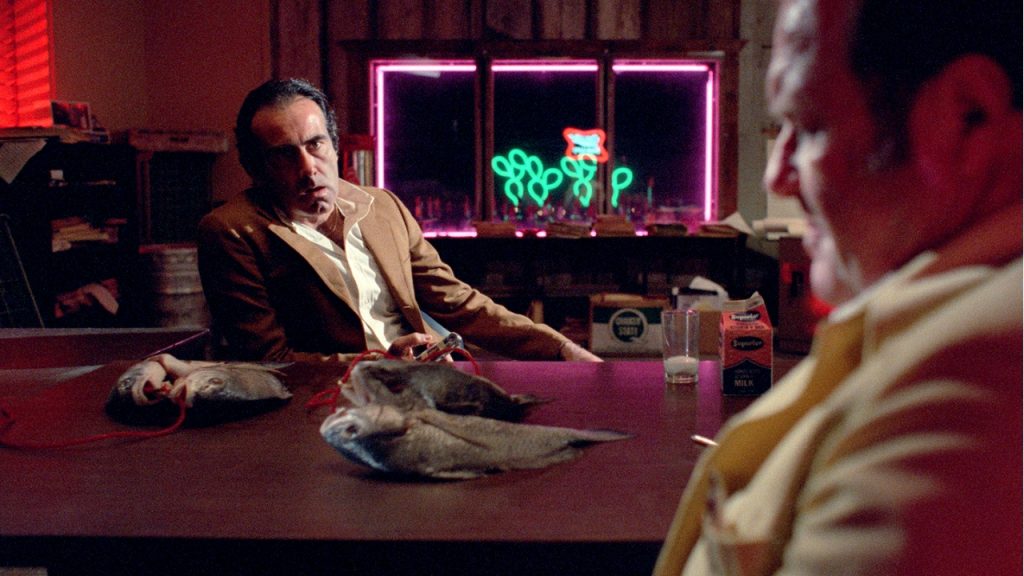 Despite the titular riff on Hammett, Blood Simple’s story—about a sleazy Texas nightclub owner who hires an even sleazier private eye to murder his two-timing wife and her lover—is not inspired by his work, so much as that of his contemporary, James M. Cain, whose first two novels—The Postman Always Rings Twice (1934) and Double Indemnity (1936)—chart the descent into criminality and damnation following an affair between low-rent hustlers and married women.

But it bears even more of a resemblance to the savage novels of postwar pulp author Jim Thompson—particularly his seedy barroom thriller The Kill Off, as well as the Texas-set The Killer Inside Me and Pop. 1280, whose central psychopaths disguised as good ol’ boys are cut from the same filthy cloth as Blood Simple’s satanically cunning antagonist—although somewhat surprisingly (but not too surprisingly, given that Thompson’s books were so long out of print), the Coens were unfamiliar with his work until after the film was released. However, that late discovery would prove fruitful a few years down the line.

The brothers’ next film, Raising Arizona, used another classic crime template—the kidnapping caper—although its main influence stems not from any hardboiled scribe, but rather the great American cartoonists Tex Avery and Chuck Jones. With their third film, the ‘30s gangland saga Miller’s Crossing (1990), where they returned once more to the cold bosom of Hammett, taking entire scenes, plot points and bits of dialogue from several of his novels, but in particular The Glass Key (1931), about a political hatchet man playing various enemy factions against one another in order to protect his mob boss best friend. The film is a rich and complex love letter to Hammett, the most faithful encapsulation of his vision on screen (which is saying a lot, considering his own cinematic legacy), and one of the best and most influential gangster movies of the last 30 years.

During the scripting of Miller’s Crossing, the brothers came down with a bad case of writer’s block and took a detour to write Barton Fink, a surreal ‘40’s Hollywood satire about—what else?—a screenwriter suffering from writer’s block. For Fink, they plucked gleefully from a number of literary influences, including Jim Thompson’s hotel-set thriller A Swell Looking Babe (1954), Otto Friedrich’s showbiz history City of Nets: A Portrait of Hollywood in the 1940’s (1986), and, most importantly, the work of Clifford Odets.

Odets—who parlayed his success as a writer of leftist social realist stage dramas into a career as a Hollywood screenwriter (his incredible script for 1957’s The Sweet Smell of Success is widely held as one of the greatest screenplays ever written), until his half-cooperative testimony before the House Un-American Activities Committee permanently stained his reputation—served not only as the model for the character of Barton Fink physically and biographically, his noirish melodrama The Big Knife (written for the stage in 1949 and adapted for screen in 1955) is clearly a major touch point, what with its fallen idealist/morally stricken Hollywood hack hero, despotic studio honcho and out-of-the-blue third act murder subplot—all of which appear in the Coen’s film.

After The Hudsucker Proxy (1994), their homage to Frank Capra’s Mr. Deeds Goes to Town (1936), in which they swapped noir for screwball, they released Fargo (1996), another kidnapping-gone-wrong caper, this time set in their home state of Minnesota, where a snow blanketed winter wasteland serves as a blank canvas for a shockingly brutal and bloody comedy of errors. Fargo doesn’t showcase any obvious overriding literary influences, although its desperate, none-too-bright antagonists recall the low-rent hustlers found in the work of  Elmore Leonard and David Mamet, while its hero and moral center, pregnant police chief Marge Gunderson (Frances McDormand), follows in the footsteps of faux-naif sleuths like Miss Marple and Father Brown (although her closest progenitor is TV’s Columbo).

True to form, the Coens followed the critical success of Fargo with what, at the time, was considered a minor lark, but has since proven to be their most culturally impactful effort. With The Big Lebowski, they returned to the noir cannon for a stoner spin on the Los Angeles-based mysteries of Raymond Chandler, particularly 1939’s The Big Sleep, which introduced his iconic flatfoot hero, Philip Marlowe. 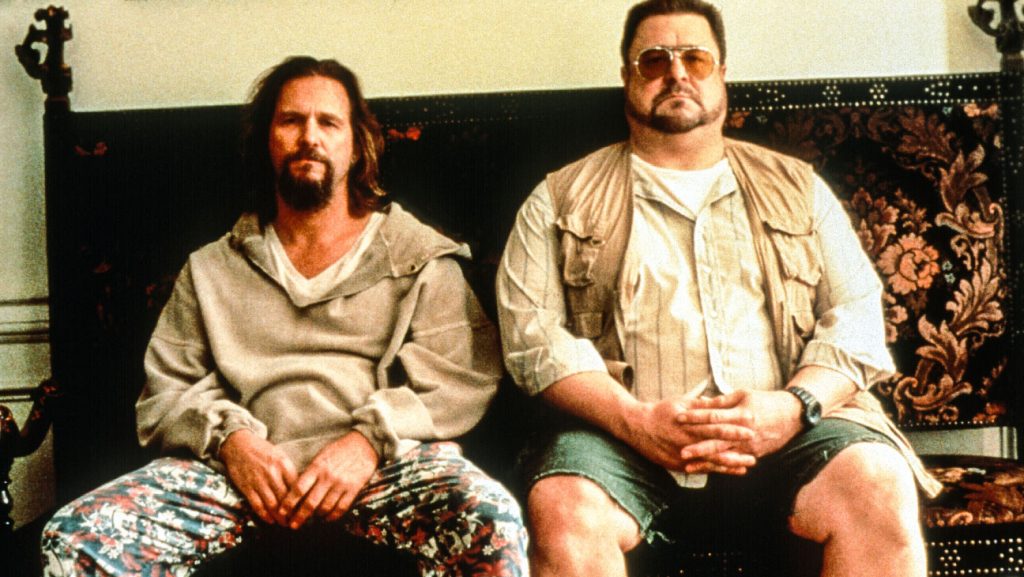 Doubling down on Chandler’s penchant for labyrinthian narrative and dangling plot threads, and filtering it all through a haze of pot smoke and boomer disenchantment (it’s both a hangout and hangover movie), The Big Lebowski  is as much a spiritual follow-up to Robert Altman’s 1973 adaptation of Chandler’s The Long Goodbye as it is a send-up of the original novel or the Humphrey Bogart-starring movie from 1946. Whereas Altman’s film finds Marlowe unstuck in time and ambling through the moral morass of ‘70’s Los Angeles, The Big Lebowski sees his modern-day slacker equivalent, Jeffery ‘the Dude’ Lebowski (Jeff Bridges), just trying to mind his own business in a post-Reaganite L.A. rendered absolutely faceless by corporate homogenization. Forget moral ambiguity—Chandler’s mean streets have been taken over by literal nihilists.

(For all that The Big Lebowski  takes from The Big Sleep and The Long Goodbye, it’s also a comedic update of Newton Thornburg’s 1976 thriller Cutter and Bone, although the connection is more evident in regard to that book’s 1981 film adaptation, Cutter’s Way, which similarly finds Bridges playing a SoCal burnout who gets roped into ripping off a local tycoon at the behest of his loose cannon, Vietnam vet buddy.)

After Lebowski came 2000’s O Brother, Where Art Thou?, an incredibly loose retelling of Homer’s The Odyssey set in the Depression-era south. Although it’s mostly a slapstick/screwball affair (named for the film-within-a-film of 1941’s comedy classic Sullivan’s Travels), it is steeped in Southern Gothic and grotesque, most notably the writings of William Faulkner and Flannery O’Connor, both of whom can be looked at as proto-noir authors.

One year later, the Coen’s came full circle to James M. Cain with The Man Who Wasn’t There, about laconic barber Ed Crane (Billy Bob Thorton) who, for no real reason, decides to scam his wife’s rich boss (with whom she’s having an affair) and invest in a dry cleaning business. Suffice to say, things go wrong fast (relatively speaking—The Man Who Wasn’t There is their most measuredly paced film) and the bodies start piling. 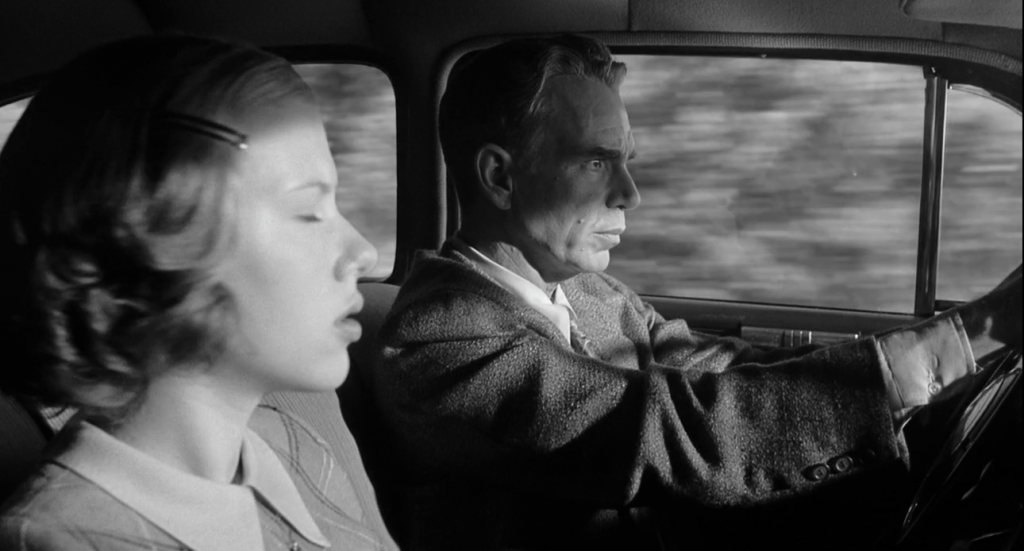 Their most obviously noirish film yet thanks to its stunning high contrast black-and-white photography, terse and existentialist voice over narration, and postwar period setting, the Coens take it even further by making its Cain connections overt through various allusions and references to characters, as well as the repurposing of key plot points from his books—affairs and murder, yes, but also embezzlement (Mildred Pierce), a fateful third act car crash (The Postman Always Rings Twice), a not-so-innocent teenage piano prodigy (Mildred again) and the ultimate irony of a murderer being convicted for the wrong murder (Postman again).

Arguably the Coen’s most underrated film, The Man Who Wasn’t There earned mostly positive reviews upon its release, but it also brought out the favorite critique of their detractors: that they too often tend to lose themselves in irony and pastiche. This charge would be leveled even harder against their their next two films, the screwball romance Intolerable Cruelty (2003) and their remake of the Ealing Studio black comedy The Ladykillers (2004), both of which are generally considered their worst films (though Cruelty has its defenders, myself included).

For a while it looked as though the brother’s had lost their magic touch, but they rebounded three years later with their biggest critical success—and their first straightforward literary adaptation—No Country for Old Men. Staying exceedingly faithful to Cormac McCarthy’s 2005 border set thriller of the same name, they managed to capture the novel’s terror and exhilaration, as well as its philosophical heft and the terse poetry of its prose (qualities that none of the other McCarthy adaptations have managed quite as successfully), in so doing creating one of the most instantly iconic neo-noirs of all time. 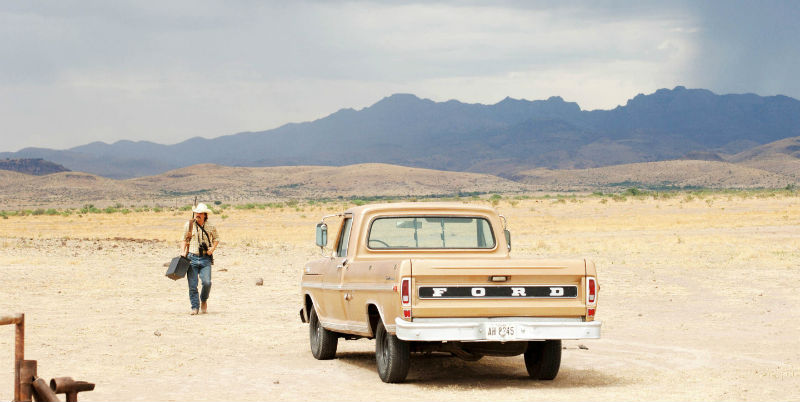 This kicked off a stellar run of films over the next decade, one that’s practically unmatched by any of their peers. But while they would continue to look to literature for inspiration (particularly westerns: Charles Portis’s comic odyssey True Grit in 2010 and a couple obscure short stories for their 2018 omnibus anthology The Ballad of Buster Scruggs), No Country also marked the last time they went to the noir well (although their immediate follow-up, the farcical Burn After Reading, takes the piss out of shadowy conspiracy thrillers from the likes of Richard Condon and James Grady). An adaptation of Ross Macdonald’s hardboiled Lew Archer P.I. novel Black Money was in the works at one point, but so far has failed to materialize.

The forthcoming Macbeth (which has seen its production unfortunately halted by the coronavirus pandemic but is still scheduled for completion) marks a turning point for the Coens, as it will be the first feature helmed by Joel in which Ethan—who is taking a break from film to focus on theater—is not involved. But it also signals a return to their earliest work, and for that, lovers of noir should rejoice.

The Montague Twins: The Witch's Hand 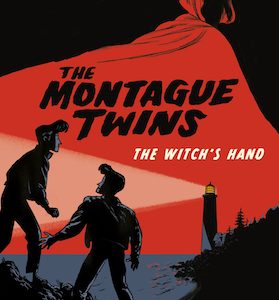 The Montague Twins: The Witch's Hand